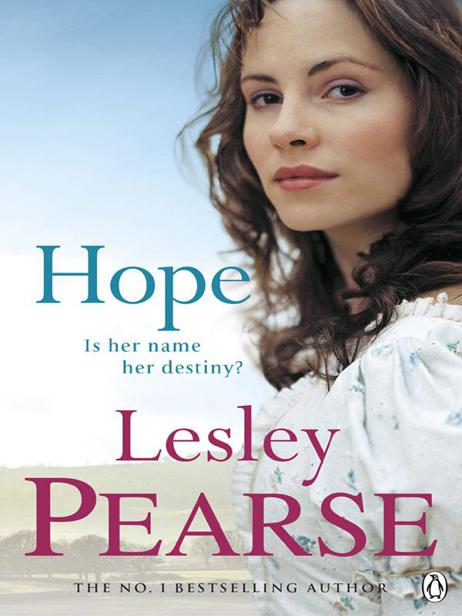 Somerset, 1836, and baby Hope is cast out from a world of privilege as living proof of her mother's adultery ...

Smuggled away from the Harveys and Briargate House to a nearby village, Hope grows up in the arms of the warm and loving Renton family, unaware of her true identity. But fate has harsh plans for Hope and a chain of events sees her forced to lead a vagabond's existence until she finds the courage to fight back and prove herself a fearless and able nurse, a vocation that takes her to the horrific battlefields of the Crimea.

But the secrets of the past are not yet done with Hope Renton and she must return to England to face the legacy of her birth ...

With the storytelling magic that has won Lesley Pearse millions of fans,
Hope
is the portrait of a remarkable woman who will never let the world - or injustice - bring her down.

To all my friends and neighbours in Compton Dando for
making me feel so welcome and happy here.
I hope you will enjoy this entirely fictitious story, and
forgive me for taking liberties with our real village history,
and for any mistakes or omissions.

‘Screaming don’t help babbies into this world!’ Bridie snapped irritably, and forced the rope knotted to the bed-head into her mistress’s hands. ‘Jest pull on this and bear down.’

At the sound of the door opening behind her, she glanced over her shoulder to see Nell, the parlourmaid, coming in with a basin of hot water. ‘About time too! I thought you’d skedaddled,’ she barked.

Nell was not offended by old Bridie’s sharpness; she understood it was only because she was frightened. Bridie was not a midwife and it was only the horror of Lady Harvey being put to public shame that had induced her to deliver this baby herself. She looked all of her sixty years now, with her iron-grey hair escaping from her starched cap, her plump face drawn and yellowy in the candlelight, and her blue eyes, which normally twinkled with merriment, dull with exhaustion and anxiety.

‘Maybe we should get the doctor?’ Nell blurted out as she saw the angry distended veins which had popped up all over Lady Harvey’s face and neck. ‘It’s surely taking too long and she’s in such pain.’

Bridie glared, and Nell took that to mean she was not to offer any further opinions or suggestions. So she took the rag from the cold-water basin, wrung it out and wiped her mistress’s forehead. She just hoped Bridie knew what she was doing, for if her ladyship were to die, they’d both be in deep trouble.

The room was fetid and airless, hot as an oven even though the fire was almost out now. The heavy tapestry curtains around the bed and the highly polished dark furniture added to the claustrophobic atmosphere. Nell had seen the first rays of dawn coming into the sky as she fetched the hot water from the kitchen, and she was so tired she felt she might fall down where she stood.

Last year she’d helped at her baby brother’s birth, but it had been nothing like this. Mother had been walking around until minutes before, and then she lay down, gave a bit of a shout, and out came the baby as smooth as a greasy piglet. Until tonight Nell had thought that all babies arrived that way.

But Lady Harvey had started her yelling and carrying on at six yesterday evening and it had just got worse and worse through the night. Her lovely white nightgown was sodden with sweat, and beneath it her distended belly looked obscene in the flickering candlelight.

If this was what you got for going with a man, Nell thought, she’d sooner die a virgin.

‘Let me die and the baby with me!’ Lady Harvey yelled out. ‘God, haven’t you punished me enough for my wickedness?’

‘Push the baby out or you will die,’ Bridie yelled back, and gave her mistress a sharp slap on her naked thigh. ‘Come on, push the little bugger out, damn you!’

Whether it was the slap or the threat of death that did it, Lady Harvey’s screams turned to a kind of bellow, not unlike a cow in labour, and all at once she was pushing with real determination.

Some twenty minutes later Nell’s eyes grew wide as she finally saw the baby’s head coming. The hair on it was gypsy-black, in stark contrast to her mistress’s lily-white thighs.

Nell watched entranced, her exhaustion forgotten as the baby slid out into Bridie’s knurled old hands. The belly which had seconds ago looked as taut and swollen as a ripe pumpkin suddenly sagged, and her ladyship let out a gentle sigh of relief that her ordeal was finally over.

Bridie pointedly placed the new baby well away from its mother, not even proclaiming that she’d had a girl. Nell caught the older woman’s eyes, saw the fear in them, and all at once the joy and wonder she’d felt at the miracle of new life was extinguished.

This baby wasn’t intended to live. Bridie was not going to slap its little back, or breathe into its tiny mouth to help it survive. It was meant to die.

‘Is it really over now?’ Lady Harvey asked, her voice just a hoarse whisper.

‘Aye, it’s over now, m’lady,’ Bridie said as she quickly tied the cord and cut it. ‘Just the afterbirth to come and you’ll be able to go to sleep and forget it all.’

Nell looked down at the motionless, silent baby lying on the bed. Her younger brothers and sisters had all been ugly and purple with bald heads at their birth. They’d squalled with anger at their speedy arrival into a harsh new world. But this one was pretty, with dark hair and a mouth like a little rosebud. Nell thought that was perhaps because it was ordained to go straight to heaven.

‘Did it die?’ Lady Harvey asked sleepily. The angry red veins on her face and neck had already faded, but she looked gaunt and pale. Her long golden hair, Bridie’s pride and joy, was matted and dull. Nell could hardly believe this was the same young woman she’d always admired for her serene elegance and beauty.

Bridie merely glanced sideways at the infant as she massaged her mistress’s belly. ‘Aye, m’lady, I’m afraid so,’ she replied with a break in her voice. ‘But perhaps that’s just as well.’

Bridie nodded at Nell, who took up a piece of flannel, wrapped it around the baby and lifted it up. Lady Harvey reached out one finger to run it down the infant’s cheek, and then turned her head away as the tears came. ‘God’s will,’ she whispered. ‘But I’m grateful for his mercy.’

Bridie nudged Nell towards the door. ‘Take it to the still room, then you go to your bed,’ she whispered. ‘I’ll deal with it later when I’ve finished here.’

Holding the tiny lifeless baby in her arms, Nell walked quickly down the corridor towards the backstairs. Briargate Hall was as silent as a crypt. All the other servants had been sent to the London house three weeks ago to prepare it for Sir William Harvey’s return from America. He had been there for almost two years, and this of course was the reason why Bridie hadn’t attempted to save the baby. If she knew who its father was, she wouldn’t say. She had guarded her mistress’s secret pregnancy as if it were her own. Even when she was compelled to include Nell in the conspiracy because she couldn’t handle the birth alone, she told her nothing more than that her ladyship was carrying an unwanted child.

It was the end of April, and it was only yesterday that they’d finally seen signs of spring after a long, bitterly cold winter. It was going to be another fine, warm day today too, because the sun was already streaming in through the east window by the backstairs.

In the huge mirror beside the window, Nell could see herself reflected. The image shocked her, not so much because she looked so untidy, her apron stained and her cap all askew with strands of hair hanging down, but because the night’s events had suddenly aged her. Just twenty-four hours ago she’d looked like any other sixteen-year-old housemaid: neat and demure in her starched uniform, her cheeks pink from running up and down the stairs, and a sparkle in her dark eyes because Baines, the butler, wasn’t here to keep reprimanding her. Her mind had been on Ned Travers, who had said he’d meet her in Lord’s Wood that afternoon. He was about to enlist in the army and all the village girls wanted to be his sweetheart. Nell wasn’t exactly sure that was what she wanted, but it was good to think he wanted her.

Nell knew she wasn’t blessed with beauty. She took after her father’s side of the family, as all her brothers and sisters did. They were short and sturdy with black straight hair and dark brown eyes. Ned had said she had a complexion like cream, but that was probably only sweet talk. Her mouth was too small, her nose a little too big, and her eyebrows too bushy.

She didn’t get to meet Ned, so she’d never know whether he liked her for herself or because he thought a plain girl like her might be easy. Bridie dropped her bombshell mid-morning and made it quite clear Nell was not to leave the house for any reason.