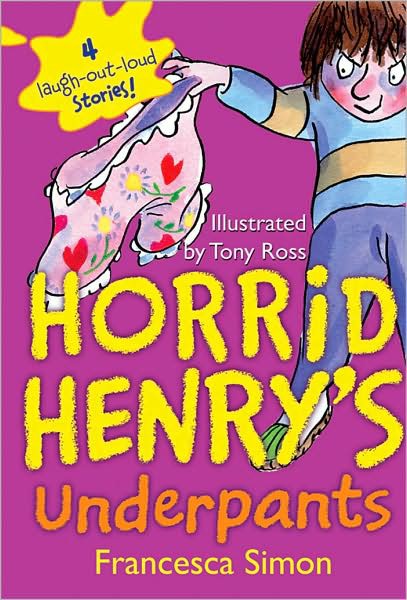 *
Over 15 million copies sold in 27 countries and counting

*
Francesca Simon is the only American author to ever win the Galaxy British Book Awards Children’s Book of the Year (past winners include J.K. Rowling, Philip Pullman, and Eoin Colfer).

“
Wonderfully appealing to girls and boys alike
, a precious rarity at this age.” —Judith Woods,
Times

“
I love the Horrid Henry books by Francesca Simon
. They have lots of funny bits in. And Henry always gets into trouble!” —Mia, age 6,
BBC Learning Is Fun

“My two boys love this book, and
I have actually had tears running down my face and had to stop reading because of laughing so hard
.” —T. Franklin, Parent

“
It’s easy to see why Horrid Henry is the bestselling character for five- to eight-year-olds
.” —
Liverpool Echo

“I have tried out the Horrid Henry books with groups of children as a parent, as a babysitter, and as a teacher.
Children love to either hear them read aloud or to read them themselves
.” —Danielle Hall, Teacher

“ A flicker of recognition must pass through most teachers and parents when they read Horrid Henry.
There’s a tiny bit of him in all of us
.” —Nancy Astee,
Child Education

“
As a teacher…it’s great to get a series of books my class loves
. They go mad for Horrid Henry.” —A teacher

“
Henry is a beguiling hero who has entranced millions of reluctant readers
.” —
Herald

“An absolutely fantastic series a d surely a winner with all children. Long live Francesca Simo and her brilliant books! More, more please!”

“
Laugh-out-loud reading for both adults and children alike
.” —A parent

“
Horrid Henry certainly lives up to his name, and his antics are everything you hope your own child will avoid—which is precisely why younger children so enjoy these tales
.” —
Independent on Sunday

“Henry might be unbelievably naughty, totally wicked, and utterly horrid, but
he is frequently credited with converting the most reluctant readers into enthusiastic ones
…superb in its simplicity.” —
Liverpool Echo

“Will make you laugh out loud.”

“Parents reading them aloud may be consoled to discover that Henry can always be relied upon to behave worse than any of their own offspring.” —
Independent

“
What is brilliant about the books is that Henry never does anything that is subversive
. She creates an aura of supreme naughtiness (of which children are in awe) but points out that he operates within a safe and secure world…
eminently readable
books.” —Emily Turner,
Angels and Urchins

“Inventive and funny, with appeal for boys and girls alike, and super illustrations by Tony Ross.”

“Accompanied by fantastic black-and-white drawings, the book is a joy to read.
Horrid Henry has an irresistible appeal to everyone—child and adult alike!
He is the child everyone is familiar with—irritating, annoying, but you still cannot help laughing when he gets into yet another scrape. Not quite a devil in disguise but you cannot help wondering at times! No wonder he is so popular!” —Angela Youngman

Horrid Henry and the Mummy’s Curse

Horrid Henry and the Soccer Fiend

Horrid Henry and the Scary Sitter

Originally published in Great Britain in 2003 by Orion Children’s Books.

How Dad and Mom and Peter could eat this swill without throwing up was amazing. Henry poked at the white, knobbly clump. It looked like brains. It felt like brains. Maybe it was… Ewwwwwwww.

Horrid Henry pushed away his plate.

“I love it,” said Perfect Peter. “Can I have seconds?”

“It’s nice to know
someone
appreciates my cooking,” said Dad. He frowned at Henry.

“But I hate vegetables,” said Henry. Yuck. Vegetables were so… healthy. And tasted so… vegetably. “I want pizza!”