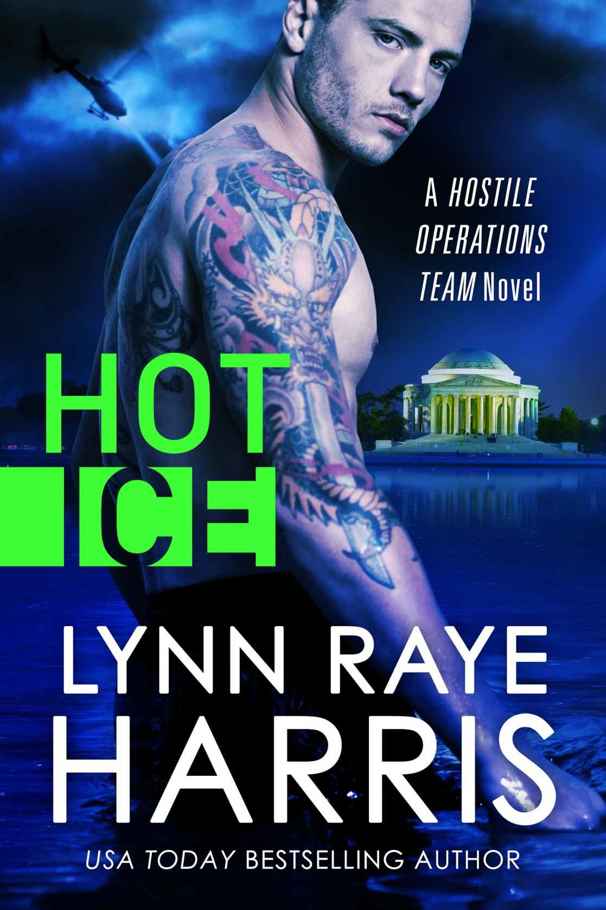 When fire and ice collide, you get steam
…

Grace Campbell leads a privileged life. The daughter of a United States senator, she moves within the social circles of the rich and famous. But Grace is also a scientist, and when someone learns she possesses the knowledge necessary to create a new super virus capable of destroying entire nations, she becomes a target for terror groups and foreign governments alike.

Garrett “Iceman” Spencer didn’t join the Army’s elite Hostile Operations Team to babysit a spoiled rich girl, but when his superiors insist on assigning him to a senator’s daughter as her security detail, he has no choice but to comply.

It’s a shock to find that beneath the glasses and serious scowl, Grace Campbell burns hot. And Garrett, who’s been burned before, suddenly wants to immerse himself in the flames.

Keeping Grace alive—and keeping his hands off her—is a full-time job for this HOT soldier. Failure is not an option…

DR. GRACE CAMPBELL LET OUT A YELP as a hand settled on her shoulder.

She spun in her lab chair, her heart pounding a million miles an hour. She’d been lost in her research, double-checking all her findings as she prepared her paper for presentation at the World Health Organization conference taking place in a couple of weeks. It was extraordinary research, and she needed to be absolutely clear on how nations could prepare for a health crisis that had the potential to kill millions.

Tim Fitzgerald smiled down at her in that familiar, easygoing way he had.

“You scared me to death,” she said, pressing her hand to her heart as if that would slow it down.

“I could tell. Any idea what time it is?”

Grace blinked. The last she’d looked, it had been almost five p.m. “I don’t know… six?”

Tim shook his head, his smile indulgent. “Try a quarter to eleven.”

Her stomach fell as she processed the information.

“Crap.” Grace started to break down her equipment, stowing the slides and shutting off the microscope. “I’ve missed the party. My mother will kill me. My father…”

She shuddered to think of what her father would say. Senator Preston H. Campbell III did not appreciate his children missing events they’d promised to attend. Especially when they were campaign events and he was in the process of seeking funding for a go at the presidency. He hadn’t formally announced his run, but he’d intended to tonight.

And she’d missed it.

“It’s all over the news that your father is running for president,” Tim said as if on cue, and her stomach tightened a little more.

“It’s not really a surprise, is it?” She tried to keep her voice light, but inside she was a mess of nerves and emotions.

“Not a surprise, maybe, but still big news.”

He didn’t say what she knew he was thinking: the profile of the lab was about to become a lot more public as the media swarmed on everything Campbell-related. Which could be good news or not-so-good news.

She thought of her research and tried to calm the churning in her belly. She really should have eaten more than a donut this afternoon.

Tim helped her gather her things—purse, laptop, umbrella—while he chatted amiably and walked out of the lab with her.

She badged out, then started fumbling for her car keys. She wanted them in her hand before she stepped outside the building.

“You already missed the party. Want to get a drink?”

Grace blinked. Her eyes were tired, and she realized her glasses were still perched on top of her head. She’d put them up there to look through a microscope. Now she pulled them back into place and stared as Tim came into focus. She’d been at Magnolia Laboratories for six months, and he’d never paid her much attention other than the usual polite colleague chitchat.

But her father had just announced he was running for president.

As the only unmarried Campbell daughter, she was a prime catch in some circles. On her own, she couldn’t attract the attention of any man, much less one who looked like this one. Tim was tall and good-looking, with brown hair and warm brown eyes. He even had a tan, heaven bless him, which was pretty rare for a guy who spent his time bottled up in a laboratory.

“I, uh… I can’t tonight,” Grace said, swearing under her breath for stammering. She wasn’t ten anymore, and she no longer had a horrible overbite thanks to modern orthodontia. But she was still plain and, well, mousy, when compared with the dazzling light of her three sisters.

Tim was frowning now. “Come on, Grace. One drink. How about it?”

She ran through the possibilities. They went for a drink, it was nice, he kissed her good night, they started to date, maybe he’d come to some family events with her, they’d get engaged, and then…

“I have to decline,” she said with that hint of steel she’d learned from her mother. “Another time perhaps.”

Tim’s frown got darker before it suddenly eased and he was smiling again. “Great, another time. Saturday?”

His grin was broad. “Excellent. Now wait right here, and I’ll get my things so I can walk you to your car.”

She fumed as he turned and walked away. She really did
not
like a man telling her what to do. She’d spent a lifetime under the thumb of her father, and while she loved him deeply, she hated how he ordered everyone’s life as if he had the right. She was almost thirty, and she didn’t need to be told what to do.

Still, she waited for Tim because in her head she could hear her mother saying that he was only being nice and that it was gentlemanly for him to walk her to her car in the dark, rainy night. She’d lost count of how often she’d left the lab late at night and walked to her car alone. There was security at the gate, and no one was getting into the parking lot undetected. But apparently, because Tim had suddenly offered, she had to wait.

When he didn’t return after ten minutes, Grace snorted and turned to walk out the door. The rain was coming down steadily, and she opened her umbrella and started walking toward her car. There was a nip in the air now that September had arrived. It was still warm during the day, but evenings were getting a little cooler. She suspected once this rain moved out, it would be even chillier.

Her heels clacked on the pavement as she walked. Her car was a white gleam beneath the streetlights. There were still cars in the parking lot, so she wasn’t the only one working late. She hit the button to unlock her car when she was still a few feet away.

A shape materialized out of the darkness. A tall man, hooded. Menacing, but then that was probably just her imagination.

Grace stopped, her stomach churning. “I’m sorry, but do I know you?”

The man took a step forward until the light gleamed down on him—and the pistol in his hand. Her blood turned to ice as her brain started sending danger messages to her body.

“I work for someone who would like to talk to you.”

“I, uh…” Grace fumbled with the keys in her hand, finding the panic button to her BMW’s alarm and hitting it. The alarm shattered the night with its high-pitched blaring. The man whirled, startled.

Grace took that opportunity to run in the other direction. She dropped the umbrella and sprinted for the building, but her high heels didn’t allow her to move very quickly. She kicked them off as she ran, stumbling and cursing—and then she collided with a body.

The body was solid, the arms going around her, and she fought and kicked like a madwoman. It took a few seconds for her mind to process what was being said to her.

“Fuck you, Melissa!” Garrett Spencer yelled into the phone at the same moment his ex-wife hung up on him. He slammed the cell phone onto the table, uncaring whether he shattered it into a million pieces or not.

And then he’d picked it back up, prepared to dial her sorry ass up again and tell her she was a fucking bitch and a whore and no way in hell was she keeping him away from his daughter, that he’d fight her for custody and to hell with the agreement, when he looked up and saw his teammate standing in the locker room where they kept their gear, watching him with a heavy frown.

Garrett put the phone down again, more gently this time, and dragged in a deep breath. Threatening Melissa would do him absolutely no good, and he knew it. Hell, his attorney had told him the same thing. And he wasn’t stupid, even if Melissa pushed his buttons like no one else ever could.

He’d made the bad decision to fuck her repeatedly nine years ago, and then he’d made the decision to marry her so he could be a father to the child they’d created when they got stupid and careless with the birth control.

But he loved Cammie more than he loved anything else in this world, and while he might regret ever marrying her mother, he damn sure didn’t regret her. He shoved a hand through his hair and yanked on the ends in frustration. What a fucking life he’d made for his baby girl with a mother like Melissa.

Ryan “Flash” Gordon looked at him with one arched eyebrow. And then he laughed. “Relationship? Didn’t know you did those, Ice. So far as I can tell, you fuck anything that moves—but only once.”

“Yeah, well. How do you think I got that policy?”

He’d never told the guys about his marriage—and the spectacular disintegration of it—because he didn’t like to talk about Melissa. It made his blood boil, and he didn’t particularly like the way that made him feel. Out of control. Manic. Ready to fucking kill someone.

Flash walked over to his locker and took out his pack. They’d just returned from a mission a few days ago, but there was always another one on the horizon. Everyone checked and double-checked their gear in their downtime.

“You want to talk about it?”

Flash shrugged. “Whatever, dude. Just offering to listen if you want to vent.”

He knew Flash was only being nice, but he just couldn’t talk about Melissa. It made him feel stupid. Like a failure. Not because his marriage had failed, but because he had a beautiful kid out there in the world with parents who couldn’t stand each other. He never said anything bad about Melissa to Cammie, but he knew his ex filled their daughter’s head with negativity about him. It hadn’t made Cammie hate him yet, but God knew he feared it as she got older.

One Cup Of Flour Two Cups Of Murder (Winnona Peaks Mysteries Book 2) by Emily Page
The Witch of Blackbird Pond by Elizabeth George Speare
The Empire (The Lover's Opalus) by Reyes-Cole, Grayson
Prime Time Pitcher by Matt Christopher
The Secret (The Evolution Of Sin Book 2) by Giana Darling
Apex by Moon, Adam
Olivia’s Luck (2000) by Catherine Alliot
The Mechanics of Being Human by S. E. Campbell
Scott & Mariana by Vera Roberts
Murder by the Book by Eric Brown