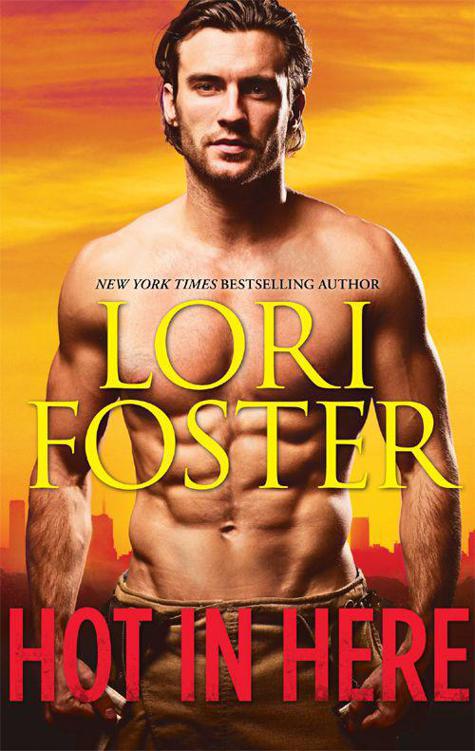 UNCOVERED
Firefighter Harris Black is startled to stumble across nude photos of a woman…and handwritten notes about him. Who is this mystery woman? Harris hires a P.I. to trace her, never suspecting he’s already found her.…

TAILSPIN
Lumberyard owner Buck Boswell prides himself on his way with women—but his prickly neighbor, Sadie Harte, seems immune to his charms. Is she really as aloof as she acts, or can Buck convince her to take a chance on the guy next door?

AN HONORABLE MAN
Lieutenant colonel Hamilton Wulf’s career ambitions cost him the one woman he ever wanted—Liv Avery. Now he’s determined to win back her love…even if it means risking his life.

“Foster hits every note (or power chord) of the true alpha male hero…a compelling read from start to finish.”
—
Publishers Weekly
on
Bare It All

“A sexy, believable roller coaster of action and romance.”
—
Kirkus Reviews
on
Run the Risk

“Bestseller Foster…has an amazing ability to capture a man’s emotions and lust with sizzling sex scenes and meld it with a strong woman’s point of view.”
—
Publishers Weekly
on
A Perfect Storm

“Foster rounds out her searing trilogy with a story that tilts toward the sizzling and sexy side of the genre.”
—
RT Book Reviews
on
Savor the Danger

“The fast-paced thriller keeps these well-developed characters moving.… Foster’s series will continue to garner fans with this exciting installment.”
—
Publishers Weekly
on
Trace of Fever

“Steamy, edgy, and taut.”
—
Library Journal
on
When You Dare

I’m so excited that Harlequin HQN is reissuing one of my favorite short stories. Readers often tell me that they laugh while reading my books. But when writing them, I’m never sure if the content is as funny as I intend it to be or not.

In
Uncovered,
I know it’s funny—because
I
still laugh just thinking about it. Once you read it, you’ll know what I mean—and I’m certain you’ll sympathize with the heroine even while cheering her on.

In
Tailspin
you’ll meet my little fur baby, Tootsie—renamed Tish for the purposes of the story. She’s my adorable little Chihuahua—now my only doggie, since Brock passed away (you met Brock, aka Butch, in
Riley
)—and she rules the house with her very tiny paw. All the cats love her, and bow to her demands. When we first got Tootsie, she was
exactly
like the dog in this story...right down to her fascination with bugs.

An Honorable Man
is unrelated to the other stories, but given my love, gratitude and respect for the military, it’s also a favorite.

I very much hope you enjoy the stories as much as I enjoyed writing them.

To catch up on all my books, be sure to check my website,
www.lorifoster.com
!

BECAUSE IT WAS DRIZZLING out, Harris Black pulled on a windbreaker before he headed outside to jog. Streetlamps left long slithery ribbons of light across the wet blacktop drive. After the heat of the mid-August day, the light rain had a sauna effect, making the air downright steamy.

He preferred jogging at night for two reasons: less human and automotive traffic, and Clair Caldwell.

Clair lived in the apartment building across the lot and always joined Harris in his evening run. For a dozen different reasons, Harris liked her a lot.

Unlike most women, Clair enjoyed the same things he enjoyed—televised sports, running, and junk food. Not once had she ever forced him to sit through a romantic comedy, thank God. But once, on a lazy Saturday afternoon, they’d watched the entire
Alien
series, back to back, without budging from the couch.

Clair’s job fascinated him. When two well-respected private investigators relocated their offices close to Chester, Ohio, the town they lived in, Clair had jumped at the chance to work for them as a receptionist. She was an adventurous sort and enjoyed the excitement of the job. But her duties went beyond secretarial. She was a computer guru, helping with online investigations, and an all-around know-it-all. She always had entertaining stories to share.

By the same token, she liked to hear about his work and his friends. Being a firefighter left him open to a lot of bawdy jokes, and Clair seemed to know them all. She teased him about the fires he put out, the length of his hose, and his specialized gear. But when he was serious, she was too, automatically picking up on his moods in a way no one else ever had. Even with his best friends, Buck, Ethan and Riley, he had to put on the occasional front. No one wanted a morose or moody friend, even if he’d just spent hours fighting a fire that sometimes didn’t have the best conclusion. They always wanted to joke him into a better mood.

Not Clair. Once, after a really grueling car fire that resulted in two deaths, Clair had just sat beside him on the couch and held his hand. They’d stared at the television, but Harris knew neither of them was really paying any attention to the movie.

What mattered most about Clair, though, was the no-pressure tone of their relationship. He saw her when he wanted to, yet he never felt he had to call. Oddly enough, because of that, he called and hooked up with her often.

They hung out without any implied intimacy to muddy the waters. She didn’t care if he shaved or if he ate Twinkies for lunch or if he stayed out all night with the guys. At first, her disinterest had bugged him, but after Ethan and Riley had up and married, Harris became leery of smiling women—and with good reason. The females had detected a nonexistent pattern of matrimony, and they pushed him constantly, to the point that he’d about given up dating.

Which meant he was celibate and that sucked, but it beat dodging topics of “happily ever after.” Nothing messed up good sex like a woman grasping too far into the future.

With Clair, sex was never an issue. It just didn’t come up. They were friends, totally at ease with each other, but neither of them ever crossed the line. It was such a relaxing relationship that he spent more time with Clair than with his buddies. Of course, Ethan and Riley now preferred the company of their wives, anyway.

As Harris stepped out from beneath the building’s overhang, a fat raindrop landed on his nose. Given the heavy static in the air, he knew it’d be storming before they finished their run. He sprinted across the lot at the same time that Clair’s doors opened and she strolled outside. Harris stared toward her with a smile.

Her personality put her somewhere between an egghead and a jock; she loved sports of all kinds, and was almost too smart for her own good. But no matter what the situation, and despite a lack of feminine flair, Clair always looked stylish. Granted, it was her own unique style, but her appearance was always deliberate, not one created out of lack of taste or time.

A few weeks ago she’d cut her glossy, dark brown hair shorter, and now she wore it in a stubby ponytail that looked real cute. She’d attached an elasticized band to her black-framed, oval glasses to hold them on her head while she ran. Somehow, on Clair, the look of an athletic librarian worked.

With her hair pulled back that way, Harris noticed for the first time that she didn’t have pierced ears. In fact, he realized he’d never seen Clair with jewelry of any kind. Odd. In this day and age, he thought every grown woman had her ears, if not other body parts, adorned. But then he’d always known Clair was different from other women.

At five feet five inches tall, she would be considered medium height except that she was all legs. Very long, sexy legs that even in clunky running shoes looked great. Tonight she had those gams displayed in comfortably loose, short shorts. Like Harris, she’d made a concession to the rain and wore a nylon pullover.

Harris looked up at the black sky. There was no moon, no stars to be seen through the thick clouds. Branches on the trees bent beneath an angry wind. Debris scuttled across the road. “Looks like we’ll get one hell of a storm tonight.”

“Backing out on me, sugar? Afraid you’ll melt in the rain?” She swatted him on the ass. Hard. Then took off.

To tease him, she put a little extra sway in her backside for a few steps, then she got serious again. They ran side by side, silent except for the slapping of their sneakers on the damp ground and the soughing of their steady breaths. Within fifteen minutes, the drizzle changed into a light rain. Clair said nothing, so Harris didn’t either. He could take it if she could.

After about a mile, Harris glanced toward her. She wore a concentrated expression, and her short ponytail, now darker with rain, bounced in time to her long stride. “Anything interesting happen at work today?” he asked.