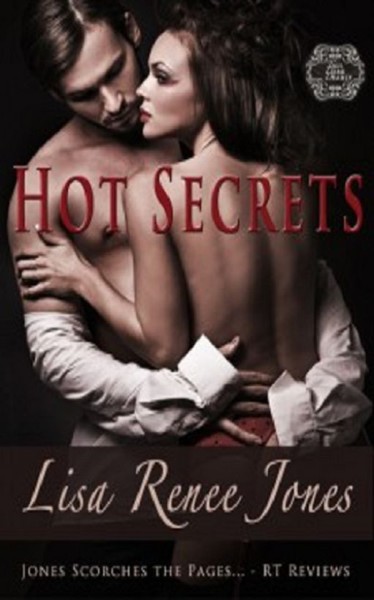 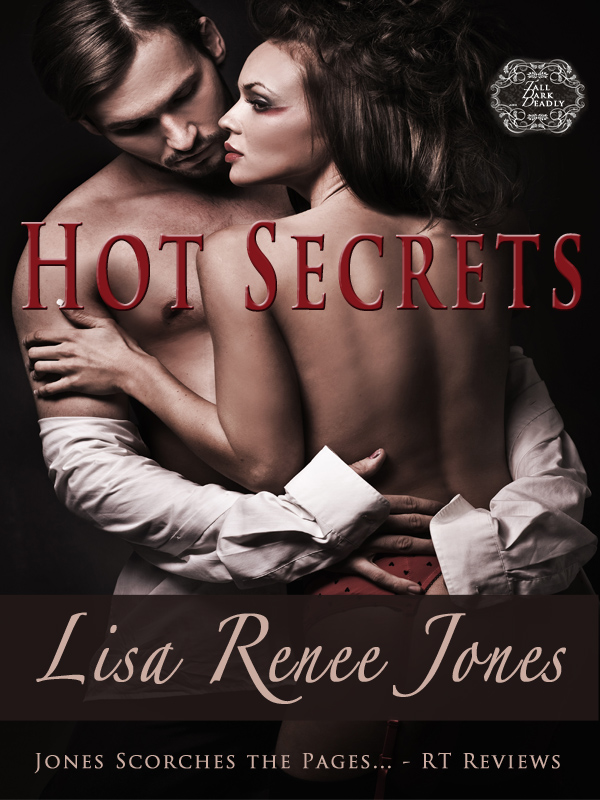 This ebook is licensed for your personal enjoyment
only. This ebook may not be re-sold or given away to other people.
If you would like to share this book with another person, please
purchase an additional copy for each person. If you’re reading this
book and did not purchase it, or it was not purchased for your use
only, then please return to the supplier and purchase your own
copy. Thank you for respecting the hard work of this author. To
obtain permission to excerpt portions of the text, please contact
the author at
[email protected]
.

All characters in this book are fiction and figments
of the author’s imagination.
www.lisareneejones.com
.

He was sitting at the Manhattan
coffee bar in a dark corner, his back to the wall, his laptop on
the wooden table, when the waitress set his coffee down and quickly
departed without a word. The oversized white mug rested on a saucer
and held plain black coffee. He didn’t believe in flavors and sweet
things, unless they came in the form of soft, womanly curves the
kind he liked to have beneath him, on top of him, and then quickly
out of the way. Used and disposed of, and therefore incapable of
creating problems he didn’t need, or want, in his life.

Discreetly, he snagged the small
data stick that the waitress had slipped onto the saucer, popped it
into his computer, and took a sip of hot coffee.

A few punches o
n
his keyboard and the image of the
familiar auburn-haired female who’d become the reason he lived, the
reason he got up every day, along with details of her habits,
memberships, likes and dislikes, appeared on the screen. Details on
a wire to his offshore account scrolled across his page. His gaze
shifted to the table directly across from his, and he almost
laughed at the assumption that he could be bought, that he wanted
the paycheck offered. This was about so much more than money.
Because at that table so close he could almost smell the vanilla
scent of the shampoo he knew she kept on the edge of her shower was
his target, a delicate little flower even if she didn’t know it,
even if she played tough in the courtroom. But she’d know when he
was done with her. She’d know, because he was going to tear her
apart, one petal at a time, and relish every moment of it, too.
He’d profiled her, just as she profiled the suspects in the cases
she took to trial for the District Attorney’s office. After all,
he didn’t earn the name
‘
Dirt Diver’
without
merit.
And just as
his
target
used
her
suspect
s’
habits, their perceived
weaknesses, against them
in
court
, he’
d
use
hers against her. He’d taunt her, announce he
wa
s coming for her, and watch her pretend
indifference, watch her stupidly stand alone. He was going to touch
her world, as she’d touched his. Draw out her torture, make her
scream his name
. M
ake
her beg for her life. And then, and only then, he would kill
her.

Lauren Reynolds groaned at her
best friend’s far too loudly spoken suggestion, feeling as if one
of the elegant chandeliers of the fancy New York ballroom had just
become a spotlight. “Keep your voice down before someone hears
you.”

“Touchy, touchy. ” Julie chided,
her baby blue eyes brimming with as much mischief as the deep V of
her sparkling blue gown. “Why do you care what these people
think?”

“I have to care, and you know
it.
These people
are my father’s friends
and colleagues, who happen to be here to celebrate his birthday.
And enough with this ‘you need a man’ stuff you’ve been harping on
all week. We can’t all be Marilyn Monroe look-a-likes who can thumb
through men like a mailbox full of advertisements. I guess blondes
do have more fun and us brunettes are stuck with chocolate and
Marie Claire magazines.”

“Boring works for me. Between my
father’s career and my work, I’m up to my neck with male egos and
still sinking.”

Julie set her glass down on one
of the several bars in a spacious room with tables filled with
delicate finger foods, and plenty of spotlight chandeliers dangling
above them. “Finally, we get to the root of the problem. Clearly,
you’ve been locked up and sheltered in your daddy’s world too long.
You’ve forgotten real men are not politicians.”

“I work for the District Attorney’s office, Julie,” Lauren
bristled. “I’m about to go to trial on a murder case with the death
penalty on the table, and it won’t be my first. I hardly call that
‘locked up and sheltered.’ And I’m hardly surrounded by nothing but
politicians.”

“Oh, please. The DA is not only an elected position, this
particular DA is all about playing the game of politics, and
you
know that.” She studied Lauren a
moment, her expression and tone softening before she added, “Look,
honey, your lack of male companionship aside, I’m worried about my
best friend. You need to get some rest and have some fun. Ever
since you started prepping for this trial, you’ve been working
around the clock. And before this one, there was another.”

“They’re
all
big to you,” Julie
disputed. “That’s why you’re getting assigned murder cases, not
petty theft cases. You work insane hours without complaint, then
pull ‘daughter’ duty like some sort of robot.”

“Tonight I understand,” she said. “It’s the many other functions
and I do mean
many
that he insists you
attend, that you need to put a stop to.” She lowered her head and
softened her voice. “You need a life that isn’t his, which brings
me back to the ‘hot male’ category of this conversation, and no,
I’m not talking the email version.”

“I just got out of a relationship. I don’t need another.”

“You didn’t
just
get out of anything. You dumped
your cheating ex-fiancé, who was hotter for your father’s power
than he was you, more than six months ago. And not without bruises
to your emotions and your confidence, which makes me want to find
the man and give him a good knee to the balls. I’ll just settle for
helping you get back on the horse.”

“You’re beautiful and sexy,” she said, as if Lauren
hadn’t even spoken, “and he made you feel like Ugly Betty when
you’re Audrey freaking Hepburn. You need a hot man to carry you
away and remind you that you are more than the sum of a courtroom
or your father’s career aspirations on your behalf.”

Lauren snorted at that. “With my luck, I’d choose an undercover
reporter who’d twist me into some sort of floozy which would spiral
into a scandal for my father.”

Julie’s eyes brightened mischievously and then widened with
delight at her own thoughts. “Actually, Lauren, maybe that’s just
what you
need
.”

“What the heck does that mean?” Lauren asked, frowning, pretty
sure what was coming. The push. Julie loved “the push,” what she
called her closing arguments on anything, in or out of a
courtroom.

“Your father’s about to retire, but he has that Kennedy family
grandeur in his sights. He wants you to run for office. He’s not
going to give up until he convinces you.” Her eyes twinkled with
mischief. “So you see a scandal can’t really hurt
him,
but it could help
you dodge a
political bullet
.”

Lauren grimaced. “Apparently you’ve broken our golden rule of
sobriety in public and had too much bubbly, because you’re talking
craziness. I work for the District Attorney’s office. I have my own
career to think about, too, and you know it.”

Julie pursed her perfect lips. “I don’t know anything of the
sort. It’s not like you want to run for DA anymore than you want to
run for any other appointed office. And you’re in the public sector
with a conviction rate that’s well above expectations, so you’re a
golden girl.”

“Oh, good grief,” Julie grumbled. “I was just baiting you with
the whole scandal thing, but the fact that you didn’t even get that
is telling, and of what, I’m not sure.”

There was an announcement at the front of the room, something
about cake and presents in half an hour. Lauren skimmed her hand
down her out-of-character siren-red silk gown, her gaze catching on
the dainty, silver watch on her wrist, the newest in a broad
collection of gifts from her father. Apologies for working late,
missing birthdays and any number of other things. She wondered what
had earned her a gift on his birthday, and when she’d find out.

Julie touched her arm. “You okay?”

“Looking for a little tolerance
for step-mommy dearest, I take it?”

“Don’t you know it,”
Lauren
agreed, dreading the
inevitable ‘make-nice moments’ with her father’s trophy wife.

“Well, to heck with our sobriety
pact,” Julie declared. “A bubbly dose of patience, coming right
up.”

Several minutes later, Lauren
sipped from a flute and waved at one of her father’s friends across
the room. She wondered if the man really was a friend, or just
someone jockeying for some position.

Julie leaned in close. “Oh
honey, you’re waving at an old fuddy-duddy so I’ve just waved my
magic wand. I have the perfect male specimen to carry you away to
orgasmic bliss. Mr. Make Every Woman Hot And Bothered himself is in
the house.”

“I seem to remember you
inferring only minutes ago that there were no men capable of such
splendor at these types of events.”

“He’s your ‘midnight fantasy,’”
she said, a wicked smile on her lips. “Or so a certain brunette
told me just last weekend, after a few glasses of wine.”

Royce Walker. She was talking
about
Royce Walker
. Lauren’s throat went
dry at the mention of the sexy State Security Advisor who also ran
a private security company with his two brothers. And, most
definitely, had been the object of her ‘midnight fantasies’ on more
than one occasion. “He’s here tonight?”

“Over here, Royce!” Julie called
out and then grinned. “He’s not only here, he’s headed our way. You
can thank me later.”

“Oh dear God, Julie,” Lauren
chided. “Why did you do that? I have enough stress tonight without
this.” And damn it, she needed a little fantasy here and there. She
didn’t want it ruined by real life.