Read How It Went Down Online

How It Went Down 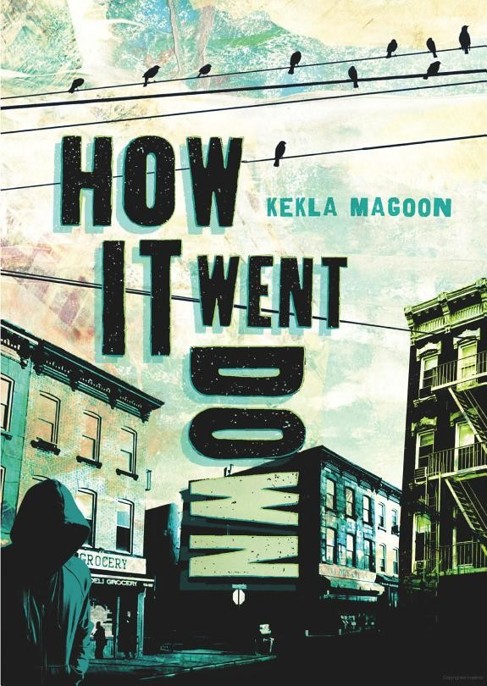 Henry Holt
®
is a registered trademark of Henry Holt and Company, LLC.

Henry Holt books may be purchased for business or promotional use. For information on bulk purchases please contact Macmillan Corporate and Premium Sales Department at (800) 221-7945 x5442 or by e-mail at [email protected]

The known facts surrounding the shooting death of sixteen-year-old Tariq Johnson are few. On the evening of June 2nd, at approximately 5:30 p.m., Johnson sustained two nine millimeter gunshot wounds to the torso. Police officers arrived on the scene at 5:37 p.m. Johnson was pronounced dead at 6:02 p.m. by EMTs at the scene. Police apprehended a person of interest, Jack Franklin, who was present when Johnson was shot but left the scene in a borrowed vehicle shortly afterward. Franklin was pulled over nearly four miles away from the site of the shooting, at 5:56 p.m. A nine millimeter handgun, recently fired, was found in the backseat.

Red. Black. White. That’s all I remember. It was a blur, like a dream sequence in the sort of movie that comes with subtitles.

Black. His hair and skin, and the tar beneath him. He was kind of sprawled out, and it seemed almost right for him to be down there, like he blended in.

White. I couldn’t make sense of it at first. It wasn’t clean white, like snow. More of a wispy, dirty white like clouds on an average winter day. I found out later, he had a carton of milk in his hand. It got a bullet right through it, started leaking like a drain and puddling up on the pavement.

The spilled milk seemed wronger than the blood, somehow. I keep thinking that.

I’m not sure I had time to blink. It was over in a minute.

My brain coiled around the knowledge:
The boy in the hoodie has been shot
. The loud sound echoed in my ears, as did his final whimper. The soft, clatter-crash of his fall. The sound—yes, the
sound
—of the look the shooter gave me. It had a voice, that look. Sharp and clear like a bell.

I ended up kneeling beside him, the wrecked, bleeding boy. Flat-looking now, so flat.

I got blood on my lip. One nervous dart of my tongue, and I tasted it. My throat filled with the need to retch.

Except I was blinking now. Blinking down at the boy.

His eyes were open, unblinking.

They do it in the movies. Reach down and close the dead asshole’s eyes. But I wasn’t about to touch him.

He stared up at me, and it was fucking creepy.

Jennica knelt beside him, in the spreading gray-white pool. “We got to go,” I told her, but she could not be moved.

“One-two-three-four-five,” she chanted, pushing the life right out of his body.

She wouldn’t leave, wouldn’t stop crying. I couldn’t get her up. She stayed there, pumping on his chest and whatnot, a fierce kinda goddess in the half-light.

“We got to go,” I said again, and she looked up at me, eyes like switchblades, like she’d fight to the death to put it all back, put it right. She was striking hot, perfection. All I could think was:
I’m with that.

If it was up to me, we woulda bugged out right away like the rest of the Kings, but Jennica’s too
good
for that.

Every fucking minute, another thing reminds me I’m not good enough for her.

Run
. All that was in my mind was:
Fucking run
.

Couldn’t think about T dying, or how easy I coulda stopped it. Especially not how easy.

Maybe he won’t die.
I tried to think it like a prayer.

T’s not a screw-up like me. He’s lucky. Two shots to the chest, yeah, he could make it.
It felt wrong to run, knowing that, but I couldn’t stop the steam under my feet.

I kept my eye on Brick’s jacket and ran where he led me.

Tried to forget I got a piece in my hand. Sleek metal body, cold and strong.

Clutched in my warm, weak fingers.

I fumbled it down into my belt. Tried to forget I could have helped out Tariq with it, taken his killer down.

The piece felt heavy at my waist. Made running kind of awkward, but I kept on, after Brick.

I need a gun. I know that. But what good will it ever do me if, when the moment comes, I can’t stand up?

Out the open window

And I squeeze my eyes shut

Fingers in my ears

CALLER: I need the police. A boy’s been shot.

CALLER: Shot. Some guy just shot the kid in the back. White guy. He pulled over his car and just—like—

OPERATOR: Sir, I’m notifying the police and EMTs. I need an address. Where are you calling from?

OPERATOR: Sir? Can you repeat that? Are you in danger? Please move to a safe location.

OPERATOR: Sir, the police are on their way.

CALLER: I can see the license. I’m going to try—

OPERATOR: Sir, please step back inside. Is the shooter still on the scene?

OPERATOR: Is the shooter still on the scene? Sir, please go back inside. The police are on their way.

OPERATOR: Which direction is he going?

CALLER: Uh … straight down Peach. No, he just turned right on Wilson. Or maybe Van Buren. It’s a ways down. I could get my car—

OPERATOR: No, sir. Please stay on the scene.

OPERATOR: Sir? Has the shooter returned to the scene?

OPERATOR: Sir, who are you talking to?

CALLER: He can’t just shoot and run like that.

OPERATOR: Do not attempt to pursue the suspect. I’ve relayed the information to the police. They will take care of it. How many people have been shot?

CALLER: Oh, God. His mama. [shouts] Push harder, girl! You got to blow into his mouth.

[sirens in the background]

OPERATOR: Sir, the police and ambulance will be arriving very shortly.

I was coming out of the hardware store when I heard a guy down the street shouting, “Stop, thief!”

I look, and this is what I see: Farther down the sidewalk, a shop clerk with an apron on comes running out of the convenience store, waving his arms in the air. “Come back here!”

Streaking past me, just right there in front of me, goes a dark face in a black hoodie. The hood’s fallen back somewhat, like he can’t hold it in place while he’s hurrying. He’s trotting down the street pretty quick, his shoulders all hunched around his haul. I can see it on his face. He thinks he’s home free. He slides past me.

Not so fast, sucker.

I step up after the little fool. There’s a bunch of other guys around, but no one’s making a move to stop him. By the looks, they’re all members of the 8-5 Kings. They don’t care enough to stop him, but he’s not getting away.

Not on my watch.

I step up, clamp my hand down on his shoulder. I got a big hand, real meaty. Takes all of his shoulder under it like a handlebar. “Not so fast,” I tell him. The Kings scare me, sure, but not this little scrap of a kid.

“This is a matter for the police,” I say, holding firm.

“
Woooooo
,” go the Kings, crowding around us. “Tariq’s gonna take down the big man.”

I read it all wrong. He wasn’t just passing by the Kings; I guess he’s one of them. They’re calling out to him, egging him on. Maybe it’s some kind of initiation.

Hoodie boy struggles. From under his arm, something small, roundish, and firm pushes out at me.

I can hold my own in a fist fight, but I’m not about to get shot to save some corner store fifty bucks in loot, or whatever this thug pilfered. I let him go. “Don’t shoot.” I back away. “I didn’t mean nothing by it.”