Read How We Do Harm Online

How We Do Harm 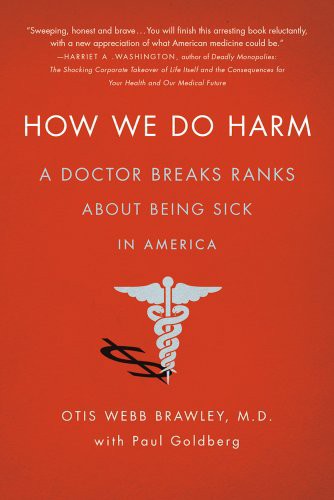 Part I.
Three from the Gradys

Part II.
Failure Is the System

20. From the Health Fair

21. Behind the Blue Curtain

Lord, teach me to be generous.

Teach me to serve you as you deserve;

to give and not to count the cost,

to fight and not to heed the wounds,

to toil and not to seek for rest,

to labor and not to ask for reward,

save that of knowing that I do your will.

Three from the Gradys

SHE WALKS THROUGH
the emergency-room doors sometime in the early morning.
In a plastic bag, she carries an object wrapped in a moist towel.

She is not bleeding.
She is not in shock.
Her vital signs are okay.
There is no reason to think that she will collapse on the spot.
Since she is not truly an emergency patient, she is triaged to the back of the line, and other folks, those in immediate distress, get in for treatment ahead of her.
She waits on a gurney in a cavernous, green hallway.

The “chief complaint” on her chart at Grady Memorial Hospital, in downtown Atlanta, might have set off a wave of nausea at a hospital in a white suburb or almost any place in the civilized world.
It reads, “My breast has fallen off.
Can you reattach it?”

She waits for at least four hours—likely, five or six.
The triage nurse doesn’t seek to determine the whereabouts of the breast.

Obviously, the breast is in the bag.

I
am making rounds on the tenth floor when I get a page from Tammie Quest in the Emergency Department.

At Grady, we take care of patients who can’t pay, patients no one wants.
They come to us with their bleeding wounds, their run-amok diabetes, their end-stage tumors, their drama.
You deal with this wreckage for a while and you develop a coping mechanism.
You detach.
That’s why many doctors, nurses, and social workers here come off as if they have departed for a less turbulent planet.

Tammie is not like that.
She emotes, and I like having her as the queen of ER—an experienced black woman who gives a shit.
When Dr.
Quest pages me, I know it isn’t because she needs a social interaction.
It has to be something serious.

The cancer team today consists of a fellow, a resident, two medical students, and yours truly, in a flowing white coat, as the attending physician.
I lead the way down the hall.
Having grown up Catholic, I can’t help thinking of the med students and young doctors as altar boys following a priest.

I am a medical oncologist, the kind of doctor who gives chemotherapy.
My other interests are epidemiology and biostatistics.
I am someone you might ask whether a drug works, whether you should get a cancer screening test, and whether a white man’s cancer differs from a black man’s cancer.
You can also ask me if we are winning the “war” on the cluster of diseases we call cancer.
As chief medical officer of the American Cancer Society—a position I have held since 2007—I often end up quoted in the newspapers, and I am on television a lot.
In addition to my academic, journalistic, and public-policy roles, I have been taking care of cancer patients at Grady for nearly a decade, first as the founding director of the cancer center, and now as chief doctor at the ACS.

My retinue behind me, I keep up a fast pace, this side of a jog.
Bill Bernstein, the fellow, is the most senior of the group.
Bill is a Newton, Massachusetts, suburbanite, still boyish.
He is having trouble adjusting to the South, to Atlanta, to its inner city.
He is trying, but it’s hard to miss that black people and poor people perplex him.
Contact with so much despair makes him awkward.
But he has a good heart, a surfeit of common sense—and he is smart.
Whatever we teach him at Grady will make him a better doctor wherever he ends up.

Grady suffers from what the administration here calls a “vertical transportation problem.”
Our elevators are slow at best, broken at worst.
We head for the stairs, rushing down to the first floor, then through long, green hallways into the ER.

Grady is a monument to racism.
Racism is built into it, as is poverty, as is despair.
Shaped like a capital letter
H,
Grady is essentially two hospitals with a hallway—a crossover—in the middle to keep things separate but equal for sixteen stories.

In the 1950s and ’60s, white patients were wheeled into the front section, which faces the city.
Blacks went to the back of the
H.
This structure—built in 1953—was actually an improvement over the previous incarnation.
The Big H—the current Grady—replaced two separate buildings—the whites got a brick building, the blacks a run-down wood-frame structure.
Older Atlantans continue to refer to the place in a chilling plural, the Gradys.

You end up at Grady for four main reasons.
It could happen because you have no insurance and are denied care at a private hospital, or because you are unconscious when you arrive by ambulance.
When your lights are out, you are in no position to ask to be taken to a cleaner, better-lit, suburban palace of medicine.
A third, small contingent are older black folks with insurance, who could go anywhere but have retained a dim memory of Grady as the only Atlanta hospital that accepted us.
The fourth category, injured cops and firemen, know that we see a lot of shock and trauma and are good at it.
We are their ER of choice.

Today, our 950-bed behemoth stands for another form of segregation: poor versus rich, separate but with no pretense of equality.
Grady is Atlanta’s safety-net hospital.
It is also the largest hospital in the United States.

The ER, arguably the principal entry point to Grady, was built in the center of the hospital, filling in some of the
H
on the first floor.
To build it, Grady administrators got some federal funds in time for the 1996 Summer Olympics.
This fueled financial machinations, which led to criminal charges, which led to prison terms.
(In retrospect, the bulk of the money was put to good use.
Many of the victims of the Olympic Park bombing came through our ER.)
The hallways here are incredibly crowded, even by the standards of inner-city hospitals.
Patients are triaged into three color-coded lines—surgery, internal medicine, obstetrics—and placed on gurneys two-deep, leaving almost no room for staff to squeeze through.

You might see a homeless woman drifting in and out of consciousness next to a Georgia Tech student bloodied from being pistol-whipped in an armed robbery, next to a fifty-seven-year-old suburban secretary terrified by a sudden loss of vision, next to a twenty-eight-year-old hooker writhing in pain that shoots up from her lower abdomen, next to a conventioneer who blacked out briefly in a cylindrical tower of a downtown hotel, next to a fourteen-year-old slum dweller who struggles for breath as his asthma attack subsides.

When I first arrived in Atlanta and all of this was new to me, I took my wife, Yolanda, through the Grady ER on a Friday night.

Yolanda, a lawyer with the U.S.
Securities and Exchange Commission, feels happier above the Mason-Dixon Line.

TAMMIE
Quest—I use her real name—is cute, has a broad, infectious smile, and comes from privilege.
She grew up in Southern California and frequently refers to herself as a “black Valley girl.”

Though she identifies with the West Coast, a lot of Atlanta has rubbed off on her in the Grady ER.

No two ERs are alike.
Ours tells the story of Atlanta more clearly, more poignantly than its skyline.
Patients everywhere are scared of their wounds or diseases that rage inside them.
Here, in the middle of this big, hot, loud, violent city, they have an added fear: they are terrified of each other, often with good cause.

Elsewhere, patients might trust us doctors, admire us, even bow to our robes, our honorifics, and the all-caps abbreviations that follow our names.
Here, not so much.

A place called Tuskegee is about two hours away from here.
It’s where government doctors staged a medical experiment in the thirties: they watched black men die of syphilis, withholding treatment even after effective drugs were invented.

Tuskegee is not an abstraction in these parts.
It’s a physical place, as palpable as a big, deep wound, and eighty-plus years don’t mean a thing.
Tuskegee is a huge, flashing
CAUTION
sign in the consciousness of Southern black folks.
It explains why they don’t trust doctors much and why good docs such as Tammie have to fight so hard to earn their elementary trust.

Like me, Tammie is a member of the medical-school faculty at Emory University, and, like me, she has several academic interests.
One of these interests is end-of-life care for cancer patients: controlling the symptoms when someone with advanced cancer shows up in your ER.

Seeing us approach, she walks toward us and hands me a wooden clipboard with the Grady forms.
I look at her face, gauging the mixture of sadness, moral outrage, and fatigue.

She says something like “This patient
needs
someone who cares,” and disappears.

I glance at the chief complaint.

“Holy shit,” I say to Bill Bernstein and, more so, to myself.

I introduce myself to a trim, middle-aged, black woman, not unattractive, wearing a blue examination gown conspicuously stamped
GRADY.
(At Grady, things such as gowns, infusion pumps, and money tend to vanish.)
From the moment Tammie paged me, I knew that the situation had to be more than a run-of-the-mill emergency.
This patient clearly is not about to die on the examination table.
She doesn’t need emergency treatment.
Before anything, she needs somebody to talk to.
She needs attention, both medical and human.

The patient, Edna Riggs, is fifty-three.
She works for the phone company and lives on the southeast side of Atlanta.

Sitting on an exam table, she looks placid.
When she extends her hand, it feels limp.
She makes fleeting eye contact.
This is depression, maybe.
Shame does the same thing, as does a sense of doom.
Fatalism
is the word doctors have repurposed to describe this last form of alienation.

In medicine, we speak a language of our own, and Edna’s physical problem has a name in doctorese: automastectomy.
It’s a fancy way of saying that the patient’s breast has fallen off by itself.

An automastectomy can occur when a tumor grows so big and so deep that it cuts off the blood supply from the chest to the breast.
Denied oxygen, breast tissue dies and the breast starts to detach from the chest wall.
At places such as Grady, automastectomies are seen a couple of times a year, often enough to be taken in stride.

This case is different from others I have seen only because Edna Riggs has wrapped her detached breast in a moist, light-blue towel and brought it with her for reattachment.
I can’t help wondering why the towel is moist.
Some deliberateness has gone into the breast’s care.
I cringe at the thought that Edna has kept that package next to her on the gurney in the ER for hours.