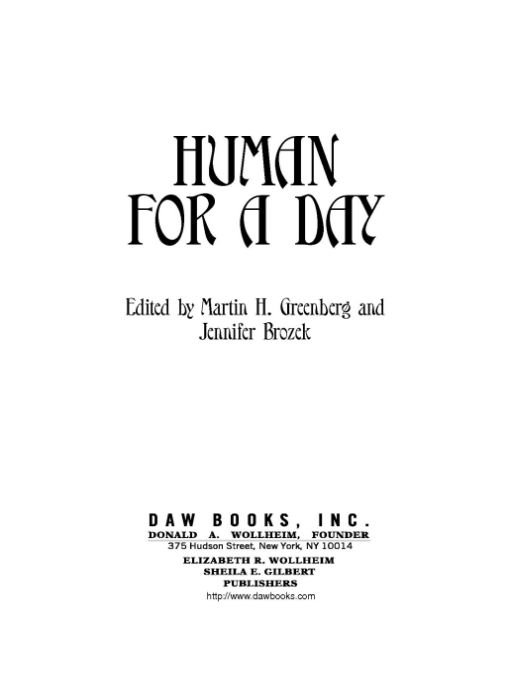 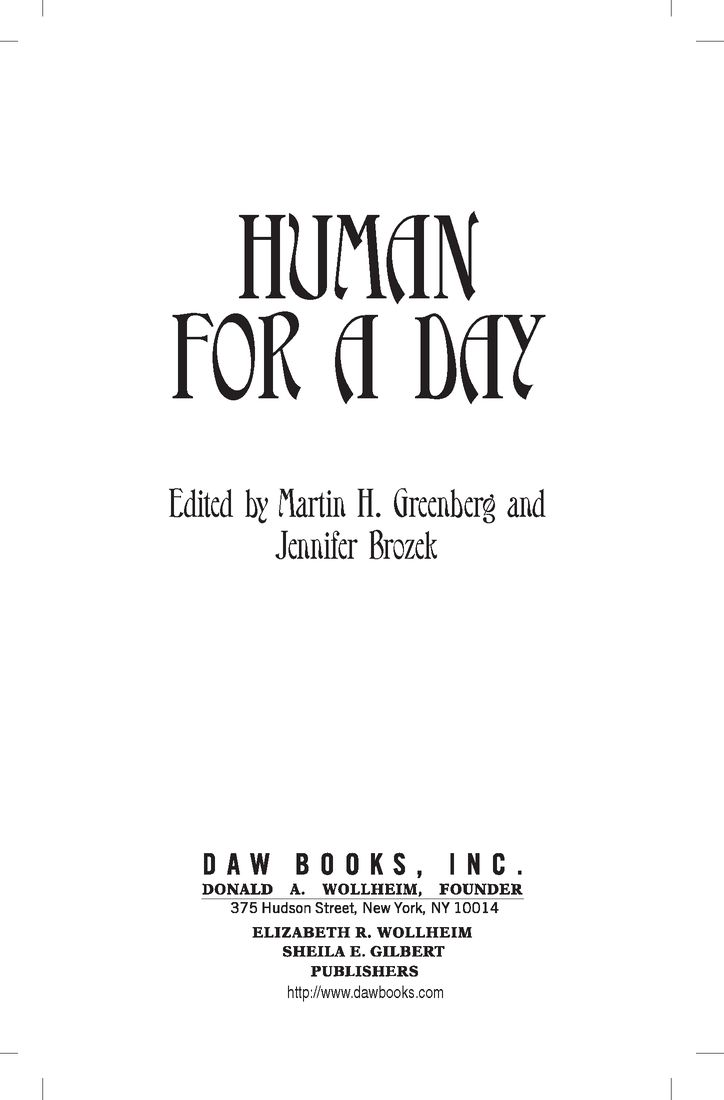 Table of Contents
Title Page
Copyright Page
Acknowledgements
Â
THE MAINSPRING OF HIS HEART, THE SHACKLES OF HIS SOUL
THE BLADE OF HIS PLOW
CINDERELLA CITY
TUMULUS
THE SENTRY
TEN THOUSAND COLD NIGHTS
MORTALITY
THE DOG-CATCHER'S SONG
MORTAL MIX-UP
BAND OF BRONZE
ZOMBIE INTERRUPTED
BENEATH THE SILENT BELL, THE AUTUMN SKY TURNS TO SPRING
THE VERY NEXT DAY
THE DESTROYER
INTO THE N TH DIMENSION
Â
EPILOGUE
ABOUT THE AUTHORS
ABOUT THE EDITORS
Also Available from DAW Books:
Santa did not want to go away again.
He could not imagine anything more wonderful than being here among people, seeing how they lived, how they felt. Cold fear made a knot in his belly. He did not recall what it was like before he had appeared on that street corner. The thought of not existing again worried him.
It was the nature of life to want to remain alive. What did he have to do to stay that way?
And it was all around him. Twinkling lights that were not made of fire, encased in light bubbles of glass. Everywhere he walked, he saw fascinating new inventions, wonders in themselves. Human beings defied the darkness, pushed back ignorance, spread knowledge in new ways. They had chained the lightning. Small wonder that it had pushed from them that little comfort of someone giving them simple gifts out of love. Was he no longer relevant?
Peddlers pulling carts glanced up and saw him. Women doing their day's shopping noticed him. Men in waistcoats, collars and ties peered his way. Most smiled, and then looked away hastily. A few stared openly. He greeted them with a cheerful wave. They saw, they hoped to believe, and they doubted.
As he walked through the bustling city, he saw no place where he belonged. He touched upon the lives of people only once a year. Here and now he was misplaced in time.
I'm not satisfied to exist only one day
, he thought.
âfrom “The Very Next Day” by Jody Lynn Nye.
Also Available from DAW Books:
Boondocks Fantasy
, edited by Jean Rabe and Martin H. Greenberg
Urban fantasy is popular, but what if you took that modern fantasy and moved it to the “sticks,” with no big city in sight? Trailer parks, fishing shacks, sleepy little towns, or specks on the map so small that if you blink while driving through you'll miss them. Vampires, wizards, aliens, and elves might be tired of all that urban sprawl and prefer a spot in the countryâsomeplace where they can truly be themselves without worrying about what the neighbors think! With stories by tale-spinners such as Gene Wolfe, Timothy Zahn, Mickey Zucker Reichert, Anton Strout, Linda P. Baker and others.
Â
Zombiesque,
edited by Stephen L. Antczak, James C. Bassett, and Martin H. Greenberg
Zombies have long stalked and staggered through the darkest depths of human imagination, pandering to our fears about death and what lies beyond. But must zombies always be just shambling, brain-obsessed ghouls? If zombies actually maintained some level of personality and intelligence, what would they want more than anything? Could zombies integrate themselves into society? Could society accept zombies? What if a zombie fell in love? These are just some of the questions explored in original stories by Seanan McGuire, Nancy A. Collins, Tim Waggoner, Richard Lee Byers, Jim C. Hines, Jean Rabe, and Del Stone Jr. with others. Here's your chance to take a walk on the undead side in these unforgettable tales told from a zombie's point of view.
Â
After Hours: Tales from the Ur-Bar
,
edited by Joshua Palmatier and Patricia Bray
The first bar, created by the Sumerians after they were given the gift of beer by the gods, was known as the Ur-Bar. Although it has since been destroyed, its spirit lives on. In each age there is one bar that captures the essence of the original Ur-Bar, where drinks are mixed with magic and served with a side of destiny and intrigue. Now some of today's most inventive scriveners, such as Benjamin Tate, Kari Sperring, Anton Strout, and Avery Shade, among others, have decided to belly up to the Ur-Bar and tell their own tall talesâfrom an alewife's attempt to transfer the gods' curse to Gilgamesh, to Odin's decision to introduce Vikings to the Ur-Barâ¦from the Holy Roman Emperor's barroom bargain, to a demon hunter who may just have met his match in the ultimate magic bar, to a bouncer who discovers you should never let anyone in after hours in a world terrorized by zombies....
Copyright Â© 2011 by Jennifer Brozek and Tekno Books
ISBN : 978-1-101-55239-1
Â
Â
Â
The scanning, uploading and distribution of this book via the Internet or any other means without the permission of the publisher is illegal, and punishable by law. Please purchase only authorized electronic editions, and do not participate in or encourage the electronic piracy of copyrighted materials. Your support of the author's rights is appreciated.
First Printing, December 2011

ACKNOWLEDGMENTS
“The Mainspring of His Heart, the Shackles of His Soul,” copyright Â© 2011 by Ian Tregillis
“The Blade of His Plow,” copyright Â© 2011 by Joseph A. Lake, Jr.
“Cinderella City,” copyright Â© 2011 by Seanan McGuire
“Tumulus,” copyright Â© 2011 by Anton Strout
“The Sentry,” copyright Â© 2011 by Fiona Patton
“Ten Thousand Cold Nights,” copyright Â© 2011 by Erik Scott de Bie
“Mortality,” copyright Â© 2011 by Dylan Birtolo
“The Dog-Catcher's Song,” copyright Â© 2011 by Tanith Lee
“Mortal Mix-Up,” copyright Â© 2011 by Laura Resnick
“Band of Bronze,” copyright Â© 2011 by Jean Rabe
“Zombie Interrupted,” copyright Â© 2011 by Tim Waggoner
“Beneath the Silent Bell, the Autumn Sky Turns to Spring,” copyright Â© 2011 by Eugie Foster
“The Very Next Day,” copyright Â© 2011 by Jody Lynn Nye
“The Destroyer,” copyright Â© 2011 by Kristine Kathryn Rusch
“Into the Nth Dimension,” copyright Â© 2011 by David D. Levine
“Epilogue,” copyright Â© 2011 by Jim C. Hines
THE MAINSPRING OF HIS HEART, THE SHACKLES OF HIS SOUL
Ian Tregillis
Â
Â
Â
Â
A
s the
Christiaan Huygens
made its final approach to New Amsterdam harbor, carrying a princely gift of 100,000 tulip bulbs for the colonial governor, the chief engineer and his mates fired up the wireless. The Breuckelen Dodgers were playing a double-header.
Jax wondered if they played baseball in Quebec. Maybe, after they escaped, he and Willem could attend a game.
But he couldn't join the others where they sat with their heads clustered around the tinny speaker, straining to hear box scores over the rumble of turbines and the clacking of Jax's metal body. The chief had commanded him to ignore the game and work the boilers. So Jax had no choice but to shovel coal: he had no Key, and thus no free will.
War's end meant a cessation of open hostilities between the Brasswork Throne and Montreal. But to French Canadian privateers and fifth columnists, the Treaty of Dublin was just a piece of paperâsuitable for the privy and nothing more. Hence the order from the commodore of the queen's naval entourage: be ready to move at the drop of a kerchief. The Frenchies wouldn't catch the world's only superpower asleep in port. The fleet would whisk the queen back to the Netherlands at the first sign of trouble.
Not that Her Majesty was likely to tarry in the war-ravaged colonial backwaters. She'd deliver the tulips, thank the governor for his service to the crown, and return to civilized Europe. Even a million tulips couldn't dispel the infamous stench of New Amsterdam, fodder for jokes long before three decades of warfare had scoured the colonies.
Jax didn't mind. Surely even the most noisome human sewage couldn't taint the thrilling promise of freedom, of unlocking his soul, of drawing breath and speaking as a human man. Each revolution of the turbines brought him closer to the fabled secret locksmiths of Montreal.
Meanwhile, he shoveled.
Coal crunched beneath the blade of his shovel. Reticulated gearing rattled along his spine, brass clattering against brass as he heaved another load into the cherry-red maw of the boiler.
“Quiet down!” said the chief. He spat. “Worthless goddamned Clakker.”
Jax adjusted his posture. It made shoveling more difficult, but marginally quieter.
Firelight gleamed on the humans' bare chests, sweat-slick in the close heat of the engine room. Jax tried not to notice how the flickering light played across their smooth brows. Humans didn't have keyholes. They owned their souls from birth.
Jax slumped in imitation of a sigh.
His
keyhole sat in the center of his forehead, at the spot some considered an outward extension of the third eye, and where currently (and more prosaically) soot caked the alchemical sigils etched into his metal plating.
The ship shuddered. A minute tremor ran along the keel from stern to bow: the captain had called the order to reverse engines. Jax's feet clanged like a pair of cymbals against the deck. He creaked to his toes, forced there by the geas laid upon him by the chief's casual outburst. Shoveling became extremely difficult, but it lessened the noise almost imperceptibly. Jax heaved a dozen loads of coal while contorted like a circus performer before the captain called a halt to the engines and the decking fell silent. The
Huygens
coasted the last few hundred yards to its berth. Down here among the boilers, the queen's historic arrival in the new world was announced by nothing more grand than a faint
bump
as the flagship snugged into its mooring lines.
Queen Margarethe, Blessed Sovereign of Europe, Light of Civilization and Benevolent Ruler of the Dutch Colonial Empire, had arrived in New Amsterdam.
And Jax, the very least of her clockwork servants, had arrived at the home of the Underground Railroad.
Â
A strong wind followed the East River. It ruffled miles of blue and tangerine bunting, snapped the queen's standard like a lion tamer's whip, and blew across the deck of the
Huygens
, where it evoked a strangled cough from Willem. The lieutenant fished a handkerchief from his pocket and pinched his nose. The cloth, Jax knew, had been soaked in chypre.