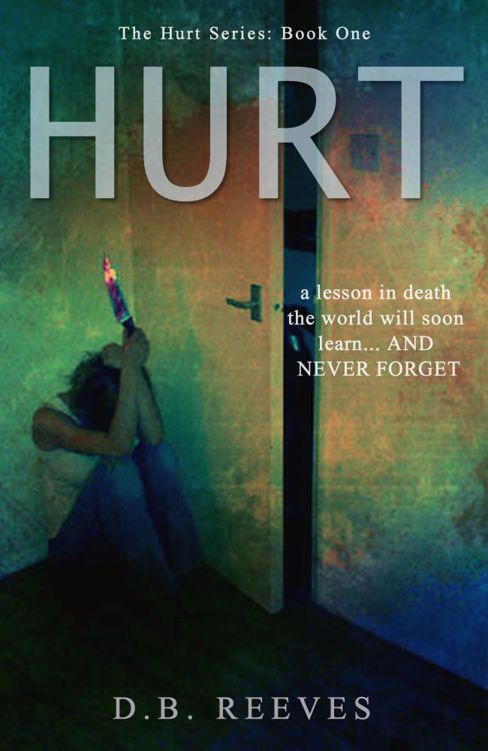 For
my loving parents, Brian and Margaret.

Chapter One-hundred and one

The stark light in the toilets did nothing to improve her gaunt features. She bunched her thick hair behind her head and tied it up in a loose ponytail. The look only served to enhance the dark rings beneath her eyes and the cheekbones she hadn’t seen since her teens.

The white vest top she wore used to fit snugly around an ample bosom, yet now hung loose on narrow shoulders and a flat chest. She looked like she belonged here among the elderly and retired. Yet she had another good twenty years or so left in her before she could rightfully call herself one of them.

Twenty years to do what, though?

That was the question. A serious question she had to consider before returning home to where the ghosts awaited her with haunting text messages about her past, and savage lessons about death and salvation.

Cool beads of perspiration broke on her brow, and her stomach twisted into a tight knot. It was all she could do to stop herself from throwing up in the sink when from her handbag her mobile rang.

Sucking up a deep breath, she fished out the phone and saw Mason’s name flashing on the screen.

She didn’t want to know any of these things.

This was why she had flown here, so as to escape the bastard’s choke hold on her life. Yet in the stark reflection in the mirror, she watched a woman she used to recognise bringing the phone to her ear and greeting her ex-colleague with a voice as sombre as the news she was about to receive.

‘Where are you?’ Mason yelled.

‘Not close,’ she mumbled.

Never before had she heard Mason raise his voice, and hearing it now scared her more than she thought it would. ‘Wait a second.’ She grabbed her handbag and strode out of the toilets back into the bar. And stopped cold.

Where a moment ago the hotel bar had entertained easy conversation and light laughter from its elderly guests and the two teenage girls propped at the bar, now it had fallen into a deathly silence. It was as if time had stopped, freezing everyone in a state of bewilderment as each and every one of them stared open mouthed at the TV above the bar.

‘Boss?’ Mason’s urgent voice reverberated in her ear. ‘You there?’

She
approached the bar, slipping past the statues of her fellow guests toward the two girls.

‘Turn the volume up,’ came a voice from within the small gathering.

The barman, himself in a state of hypnosis, complied.

She, however, did not want to hear what was going on. Neither did she want to see what would happen next.

Because not twenty-four hours ago, she’d had a chance of preventing it using the very gun the figure on the TV was pointing at the camera.

The seven-year-old girl had thick, curly black hair. In contrast, her kid sister had straight auburn hair like their mother’s. Their mother, the cake decorator, who was as talented with a chicken and some veg’ as she was with icing sugar and a sponge.

It was their mother’s chicken casserole that had filled the house with that homely aroma the girl loved so much. Most kids she knew favoured the sweet smell of popcorn or candy floss. She would swap any of those smells for the hearty aroma of mum’s homemade chicken dish. For she had been bought up to appreciate the simple things in life by parents, who had worked hard for what they had.

She took nothing for granted, especially her parents, and especially her dad, who was a respected journalist and not always home on time to enjoy mum’s cooking with the rest of the family. And sometimes, not home in time to tuck her in bed. Yet not a single night had passed without him sneaking into her room and kissing her softly goodnight, regardless of the time. She knew this because rarely did she sleep until she’d felt his warm kiss upon her forehead.

In contrast, her little sister would forever be demanding attention from their parents. More often than not, for none other reason than she knew she’d get it. However, as soon as she had it, she’d find something better to do, like annoy her big sister, just as she had been doing this afternoon. Usually the girl wouldn’t mind, but this particular Saturday afternoon she was engrossed in the new word search puzzle book dad had bought her. She was obsessed with these puzzles because, unlike other puzzles, the answers were always there before her eyes. She just had to look. Simple. However, her father had warned her if she looked too hard she risked missing the word she was seeking. The trick was to put the puzzle down and come back to it later. She’d appreciated the advice but had struggled to take it. Once she’d begun a puzzle she required absolute solitude so as to concentrate and finish it. Because try as she may she could not put it down until she’d found every last word.

Her sister knew this, of course, and would make a sport of trying to distract her. This was why the girl had hidden behind the sofa to finish her latest puzzle. Yet she knew she was on borrowed time, for although theirs was a sizable house, the scurry of tiny feet in and out the rooms was getting louder, warning her she would be found sooner rather than later.

Because that’s when the doorbell rang…

DCI Catherine Jessop opened her eyes. She blinked against the dull light creeping through the crack in the curtains and felt moisture seep onto her cheeks. Stared at the alarm clock on the bedside table, its red numbers blurry in her sodden vision.

10.22am. Her first lie-in since she could remember. And what better day than a miserable rainy Sunday?

She sniffed, clearing her nose, blocked from the tears that had welled during the night. Tears that had become more frequent recently. She was rewarded with the smell of frying bacon and fresh ground coffee from the kitchen downstairs. Over the patter of rain on the window, she could hear Ray growling along to Led Zeppelin as he prepared the breakfast in bed he’d
promised
last night. A fry-up was on this morning’s menu, guaranteed to soak up last night’s wine excess.

She shifted her head on the pillow and was punished with a dull ache above her eyes. And if that wasn’t punishment enough, the ringing of her mobile from the bedside table next to the alarm clock. A groan escaped her lips, dry from the Merlot she had sunk to try and help her unwind after a long week.

If last week felt long, how was this next week going to feel?

Short Timers Disease she’d heard her affliction called. The mythical ailment that prolongs time and saps any enthusiasm you have for your job when a holiday is imminent. But not only was this her first holiday in two years, it was also her honeymoon, due to commence a week today.

She dabbed at her moist eyes with the duvet and thought about the catalyst for the tears, Maybe she was not suffering from Short Timers Disease, after all, but from something much more potent: fear. Fear because the day after tomorrow there would walk another ghost in a city already full of them.

But this ghost, unlike the others, was not dead. Yet.

Hearing footsteps on the stairs, she snatched up the phone and wasn’t surprised to see DI Scott Mason’s name flashing on the screen, demanding her attention.

The bedroom door nudged open, announcing another man in need of her attention. But this man held a tray of good food and hot coffee, and was wearing nothing but a faded Iron Maiden t-shirt, a pair of baggy boxer shorts, and his trademark mischievous half grin.

To answer Mason’s call or not answer? That was the question. The difference between suiting up in Tyvek and stepping into a scene of bloody carnage, and slipping back beneath the sheets with bacon and eggs and coffee lay with one press of a button.

Ray eyed the ringing mobile. The smile faltered, dropping from his eyes. He shot her a wink. ‘One more week, detective. Suck it up. Then we’re outta here.’

Yeah, she thought, answering the call. And not a second too soon.

Fuelled with a couple of Aspirins, a slice of toast, and half a cup of coffee, Jessop drove through the rain-streaked streets, where the traffic was building up with Sunday shoppers heading into the city centre.