Read I Said Yes: My Story of Heartbreak, Redemption, and True Love Online

I Said Yes: My Story of Heartbreak, Redemption, and True Love 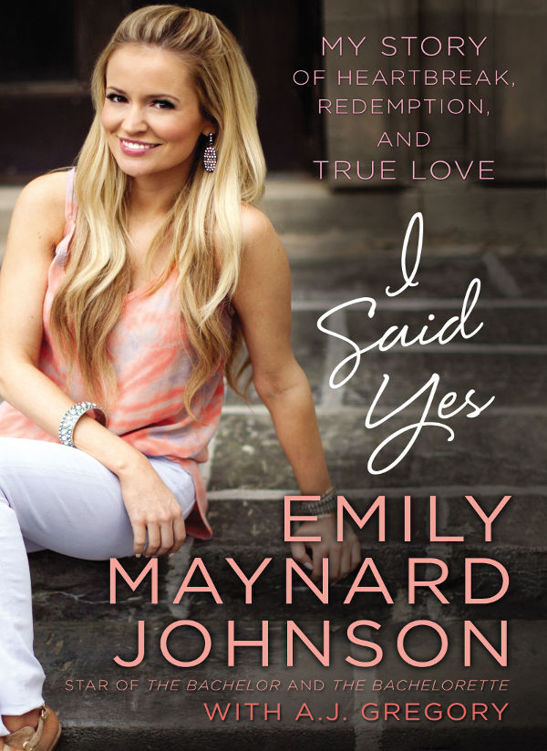 Thomas Nelson titles may be purchased in bulk for educational, business, fund-raising, or sales promotional use. For information, please e-mail [email protected]

To Tyler, Ricki, and Jennings, The three of you are my greatest gifts, and I thank God for you every day. Thank you for showing me what His unconditional love truly means.

M
y shoulders shook violently. In between heaving sobs I tried, unsuccessfully, to sputter out something semi-coherent to one of my producers on
The Bachelorette
who had fast become a close friend. Her hand gently clasping mine, she reassured me through sympathetic nods and a lot of “Oh, Emilys” that everything was going to be okay.

When my gasps slowed and I could finally control what felt like an inevitable panic attack, the words finally managed to slide out.

“I did it again,” I told her, sniffing as mascara ran down my cheeks, a telltale sign of the infamous ugly cry.

I was devastated. But I had to pull myself together for another round of press interviews and media appearances. I held on to the edge of the New York hotel bathroom counter-top, pots of eye shadow and lip glosses strewn messily about. Stomach churning, I whispered, this time to myself.

I was devastated because I said yes to something I knew I should never have agreed to the very second the tiny three-letter
word tumbled out of my mouth in front of my soon-to-be fiancé, the dedicated cameramen angling for the best shot, and, when the episode finally aired, millions of Americans. Yes to something I wasn’t quite ready for.

Three letters. One syllable. A super-short word in the English language. For many, one filled with hopes and dreams and wishes on twinkling stars. And for others, well, regret. Now don’t get me wrong. I wanted to say yes to a relationship, to love, to a “we’ll see what happens,” you know, when the microphones turn off, the set shuts down, and the crew goes home. Just not “yes, I will marry you.”

Before filming
The Bachelorette
, I was adamant to myself and to producers that I didn’t want to get engaged again. I knew better. I had prematurely said yes to Brad Womack on
The Bachelor
a few short seasons earlier. I had wanted so badly to fall in love and live happily ever after that I hung on to the relationship for dear life. Hoping. Dreaming. Wishing.

Yes.
I was beginning to hate that word and wondered if I’d ever get it right. I felt like a failure. Ashamed of my mistakes on and off both shows. Though I wanted to so badly, I didn’t know if I could ever say yes again.

C
hurch lady,” my brother, Ernie, three years my senior, spewed with disgust. I pretended I didn’t hear. It was a name he had called me for years. And oddly, it had nothing to do with the fact that I went to church. Because I didn’t, except on that rare occasion when it didn’t seem like such an enormous chore for my parents to get everyone together and out the door on time for Catholic Mass. I was dubbed the church lady because I was more or less a Goody Two-Shoes. (Maybe just one reason I had a tendency to fall for the bad boys, some of whom shall remain nameless in my vault of shame.) As a little girl, it made sense to follow the rules. I was pretty stringent. And I wasn’t shy about voicing my disapproval when the ones I loved most committed certain infractions. Like smoking.

I remember when I was around ten, bouncing up the creaky wooden staircase in our home, when I heard a familiar
click-click-click
from the stove. My father was lighting a cigarette the old-fashioned way. I made a beeline down the stairs and tore into the kitchen screaming bloody murder. “Dad, don’t do that!” I pleaded, tears streaming down my face. “You’re going to die.”

A chill from the tiled kitchen floor shivered through my body as a scene from health class a few weeks earlier replayed in my mind. The teacher had droned on and on ad nauseam about the harmful effects of smoking. I sat at my desk, barely hearing a word she was saying, riveted by a glossy photograph that was being passed around the room. There, right before my eyes, was a high-quality image of a blackened, diseased lung. I stared in horror at the charred-looking organ. So when Dad whipped out a deadly cancer stick from his back pocket, all I could think about was what was happening to his insides. Unfortunately, he didn’t appreciate my good-willed theatrics. A man who stuffed his emotions, Dad simply rolled his eyes, realizing he could avoid the drama by not smoking in front of me.

Sometimes, if he was annoyed enough at my church-lady antics, he gave me more than an eye roll. Like the time we were in Key West, where we spent a few weeks most summers, and Dad reached for his crinkly pack of smokes. On cue I started ranting and raving with high-pitched cries. My father shook his head and reached for something else in his other back pocket.

“Here,” he sighed, pressing a credit card into the palm of my hand. “Go on now, sweetie, go shopping.”

Staying true to my obedient little self, I wiped dry my tears and nodded in compliance. “Okay, Dad. I will.” It was his most expensive cigarette.

Planting roots near Cheat Lake in Morgantown, West Virginia, home to the state’s largest university, my father was an old-fashioned man who held firm to some pretty antiquated values I didn’t agree with but, like a good Southern girl, rarely questioned. Dad was a hard worker; he still is. Growing up
with empty pockets, he toiled in the coal mines as a teenager, spending ten grueling hours per day far below the earth’s surface in the presence of thick dust, heavy equipment, and noxious fumes. He worked his way up over the years and bought a handful of coal mines; today he owns two as he is beginning to retire. I loved Dad but didn’t see him much as business took up most of his time.

If I was the church lady, Mom was the Southern Martha Stewart, which means, unlike the famed M. Diddy (Martha’s prison name), my mother wore a lot of noisy bangles and had a slight and very charming twang in her voice. Mom poured her heart and soul into our house—cooking, cleaning, and decorating with passion. With her hair elegantly pinned up in a French twist, her feet dolled up in high heels, and the light scent of Calvin Klein’s Obsession emanating from her pulse points, Mom always looked as glamorous as a 1950s Hollywood starlet. She was known for her parties. Particularly the bash she threw each Christmas Eve, where she served every delectable cocktail and hors d’oeuvre known to mankind with her signature smile. Mom was a gracious and thoughtful host. Almost everyone in town showed up to her trademark parties, teeming our old Victorian house with throngs of people drinking, laughing, and gallivanting.

My brother, Ernie, was at times protective and other times an utter goofball, knowing how to make me laugh so hard I was afraid my stomach would split.

As a relatively quiet kid and lacking even a smidgen of athletic ability, I didn’t take to sports or other team activities. But I did enjoy riding horses. When I was around eight years old, I met Q-tip, a small white horse, at summer camp. I fell head
over heels. My love affair with riding compelled my parents to get me lessons. As it turned out, I was pretty good.

A few years later, Dad bought me Reno, a quarter horse elegantly marked on its face with a white star. Reno was housed at a stable an hour away. He and I rendezvoused a couple of times a week, and like a happy couple we trotted through wooded trails and learned to jump with elegance over poles and cavalletti. There was just something so comforting being alone on such a gallant animal, wind blowing through our manes as the horse galloped with a beautiful combination of strength and grace. My weekends were spent out of town at horse shows with my mom and horse trainer. Some of my best childhood memories are of riding, hurtling through space and time on the back of a beautiful and powerful four-legged mass of muscle.

When I was in the sixth grade, my parents bought a farm in Bruceton Mills, which was about thirty minutes from home. The farm was smack in the middle of nowhere, in a town with a population of, like, five. Boasting panoramic mountain views, billowing cornfields, and acres and acres of fields grazed by cows and blanketed with wooded land, it was our country haven. Mom was also riding horses at the time, so Dad bought two more. As beautiful as they were, these animals were untrained. If you ever want to test your patience or will, try riding an unbroken horse. Definitely not for the faint of heart.

One weekend when I was about twelve, Mom went riding on the farm. I was near the house but could see her mount one of the horses and gallop toward the cornfields. As I diverted my attention back to whatever it was I was doing, a cry pierced the air. I couldn’t tell if it was human or animal. Startled, I looked up over the field and at the same time saw the baseball
hat my mother was wearing shoot high into the air. My heart started racing, and I hopped on the nearest quad, wheels spinning furiously deep in the earth. By the time I got there, Mom was writhing and whimpering in pain on the dirt. My gym teacher, who had been nearby when the accident happened, hovered over her. My dad was also there and immediately barked for me to go back to the house. There was no sign of the horse. My mom was hospitalized for a few days, and though she eventually recovered from her injuries, I was traumatized for life. I never got on a horse again.

Without riding, life quickly got lonely. I was painfully shy and wasn’t talented in the making-friends department. But I did hang out with a small group of girls I had known since kindergarten. We would spend time together giggling and making up silly games at the many sleepovers I hosted at my house. We swam, canoed, and explored beautiful Cheat Lake, which bordered the back of our property. And we listened to and day-dreamed of one day marrying famous boy-band musicians, my future husband being Justin Timberlake of *NSYNC. If it weren’t for my mother’s threats to kill me, I’d have gotten a full-sleeve tattoo of JT just so I could look at him all day long. Sigh.