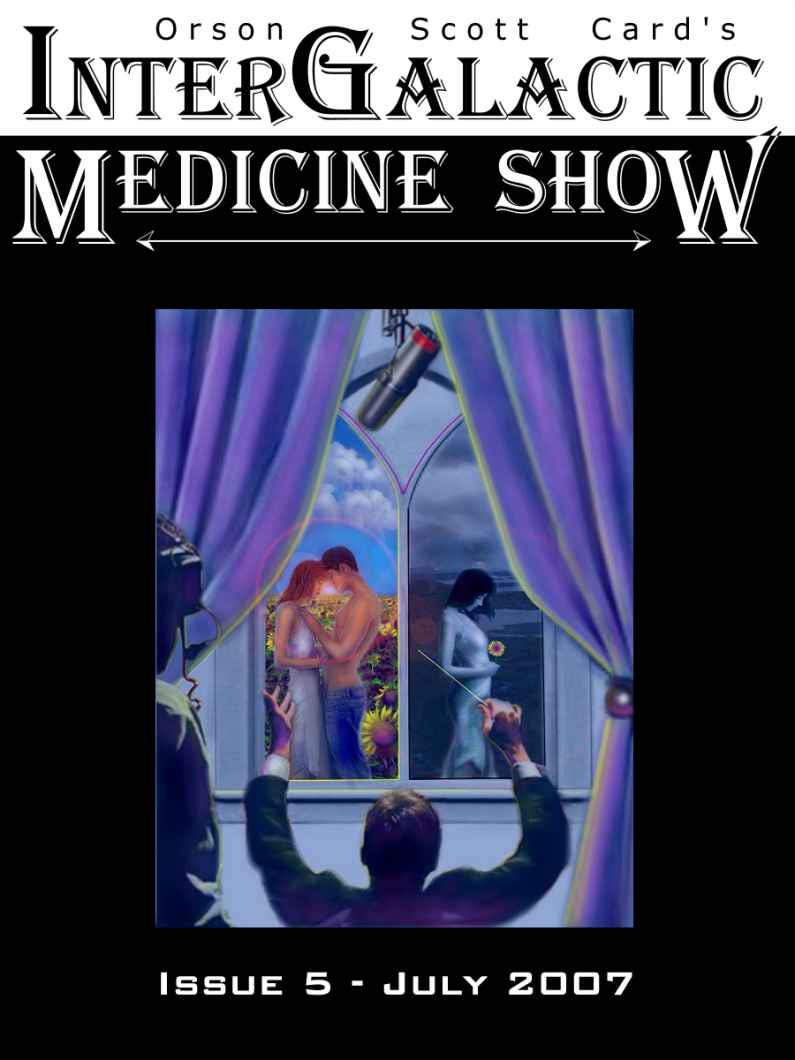 When I Kissed the Learned Astronomer 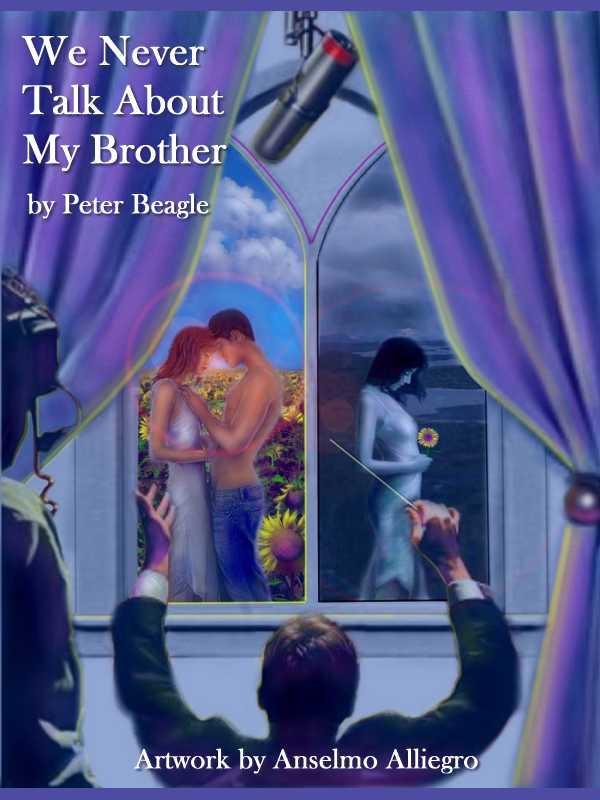 We Never Talk About My Brother

Therefore, since the world has still
Much good, but much less good than ill,
And while the sun and moon endure
Luck's a chance, but trouble's sure,
I'd face it as a wise man would,
And train for ill and not for good.
-- A. E. Housman

Nobody does anymore, haven't for years -- well, that's why you're here, ain't it, one of those "Where Are They Now" pieces of yours? -- but it's funny, when you think about it. I mean, even after what happened, and all this time, you'd think Willa and I -- Willa's my sister -- you'd think we'd say at least Word One about him now and then. To each other, maybe not to anyone else. But we don't, not ever, even now. Hell, my wife won't talk about Esau, and she'd have more reason than most. Lucky you found me first -- she'd have run you right on out of the house, and she could do it, too. Tell the truth, shame the devil, the only reason I'm sitting here talking to you at all is you having the mother wit to bring along that bottle of Blanton's Single Barrel. Lord, I swear I can
not
remember the last time I had any of that in the house.

Mind if you record me? No, no, you go ahead on, get your little tape thing going, okay by me. Doesn't make a bit of difference. You're like to think I'm pretty crazy before we're through, one way or another, but that don't make any difference either.

Well, okay then. Let's get started.

Last of the great TV anchormen, my brother, just as big as newsmen ever used to get. Not like today -- too many of them in the game, too much competition, all sort of, I don't know, interchangeable. More and more folks getting the news on their computers, those little earphone gadgets, I don't know what-all. It's just different than it was. Way different. Confess I kind of like it.

But back then, back then, Esau was just a little way south of a movie star. Couldn't walk down the street, go out grocery-shopping, he'd get jumped by a whole mob of his fans, his groupies. Couldn't turn on the TV and not see him on half a dozen channels, broadcasting, or being interviewed, or being a special guest on some show or other. I mean everything from big political stuff to cooking shows, for heaven's sake. My friend Buddy Andreason, we go fishing weekends, us and Kirby Rich, Buddy used to always tease me about it. Point to those little girls on the news, screaming and running after Esau for autographs, and he'd say, "Man, you could get yourself some of that so easy! Just tell them you're his brother, you'll introduce them -- man, they'd be all over you! All
over
you!"

No, it's not a nickname, that was real. Esau Robbins. Right out of the Bible, the Old Testament, the guy who sold his birthright to his brother for a mess of pottage. Pottage is like soup or stew, something like that. Our Papa was a big Bible reader, and there was ... I don't know, there was stuff that was funny to him that wasn't real funny to anyone else. Like naming me and Esau like he did.

A lot easier to live with Jacob than a funny name like Esau, I guess -- you know, when you're a kid. But I wasn't all that crazy about my name either, tell you the truth, which is why I went with Jake first time anybody ever called me that in school, never looked back. I mean, you think about it now. The Bible Esau's the hunter, the fisherman, the outdoor guy -- okay, maybe not the brightest fellow, not the most mannerly, maybe he cusses too much and spits his tobacco where he shouldn't, but still. And Jacob's the sneaky one, you know? Esau's come home beat and hungry and thirsty, and Jacob tricks him -- face it, Jacob
tricks
him right out of his inheritance, his whole future, and their mama helps him do it, and God thinks that's righteous, a righteous act. Makes you wonder about some things, don't it?

Did he have a bad time of it growing up, account of his name? 'Bout like you'd expect. I had to fight his battles time to time, if some big fellow was bullyragging him, and my sister Willa did the same, because we were the older ones, and that's just what you do, right? But we didn't
see
him, you know what I mean? Didn't have any idea who he
was
, except a nuisance we had to take care of, watch after, keep out of traffic. He's seven years younger than Willa, five years younger than me. Doesn't sound like much now, but when you're a kid it's a lot. He might have been growing up in China, for all we knew about him.

I'm embarrassed to say it flat out, but there's not a lot I really recall about him as a kid, before the whole thing with Donnie Schmidt. I remember Esau loved tomatoes ripe off the vine -- got into trouble every summer, stealing them out of the neighbors' yards -- and he was scared of squirrels, can you believe that? Squirrels, for God's sake. Said they chased him. Oh, and he used to hurt himself a lot, jumping down from higher and higher places -- ladders, trees, sheds and all such. Practicing landing, that was the idea. Practicing landing.

But I surely remember the first time I ever really looked at Esau and thought, wow, what's going on here? Not at school -- in the old Pott Street playground, it was. Donnie Schmidt -- mean kid with red hair and a squinty eye -- Donnie had Esau down on his back, and was just beating him like a rug. Bloody nose, big purple shiner already coming up ... I came running all the way across the playground, Willa too, and I got Donnie by the neck and hauled him right off my brother. Whopped him a couple of times too, I don't mind telling you. He was a nasty one, Donnie Schmidt.

Esau had quit fighting, but he didn't bounce up right away, and I wouldn't have neither, the whupping he'd taken. He was just staring at Donnie, and his eyes had gone really pale, both of them, and he pointed straight at Donnie -- looked funny, I'm bound to say, with him still lying flat down in that red-clay mud -- and he kind of whispered, "
You
got run over." Hadn't been as close as I was, I'd never have heard him.

Okay. Now. This is what's important. This is where you're going to start wondering whether you should have maybe sat just a little closer to the door. See, what happened to Donnie, didn't happen then -- it had already happened a week before. Seriously. Donnie, he didn't disappear, blink out of sight, right when Esau said those words. He just shrugged and walked away, and Willa took Esau home to clean him up, and I got into a one-o-cat game -- what you probably call "horse" or "catcher-flies-up" -- with a couple of my pals until dinnertime. And Ma yelled some at Esau for getting into a fight, but nobody else thought anything more about it, then or ever. Nobody except me.

Because when I woke up next morning, everybody in town knew Donnie Schmidt had been dead for a week. Hell, we'd all been to the funeral.

I didn't see it happen, but Willa did -- or that's what she thought, anyway. Donnie'd been walking to school, and old Mack Moffett's car went out of control somehow, crossed three lanes in two, three seconds, and pinned him against the wall of a house. Poor kid never knew what hit him, and neither did anyone who ever went over the car or gave poor Mack a sobriety test. The old man died a couple of months later, by the way. Call it shock, call it a broken heart, if you like -- I don't know.

But the point is. The point is that Donnie Schmidt was alive as could be the day before, beating up on Esau on the playground. I remembered that. But I'd also swear on a stack of Bibles that he'd been killed in an accident the week before, and Willa would swear on the Day of Judgment that she was there. And we'd both pass any and every lie-detector test you want to put us through. Because we
know,
we know we're telling the truth, so it's not a lie. Right?