I'm Not Afraid of Wolves (The Cotton Candy Quintet Book 4) 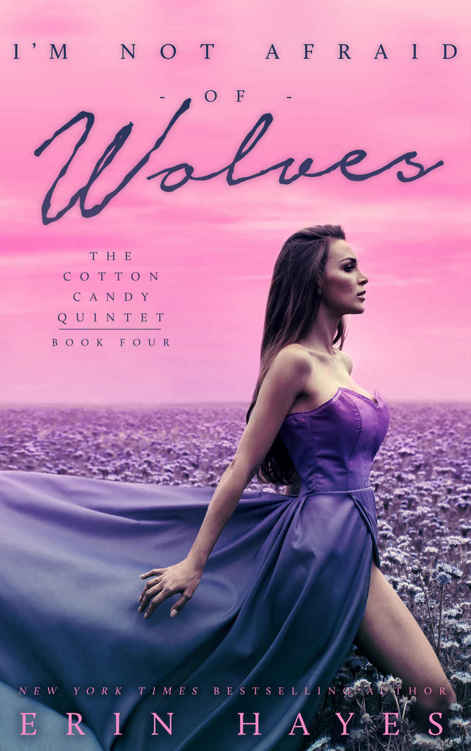 I’M NOT AFRAID OF WOLVES

Christine would do anything to get away from it all.
After escaping an abusive marriage and heading up a group of brand new performers, she’s tired and in need of a vacation. So when her sister Sara wants her to go camping out in the mountains of Georgia with the girls, she packs her bags for some rest and relaxation. Not even meeting a gorgeous park ranger like Colton Donnelly is going to distract her.
Except Sara didn’t tell her the real reason for the trip: she’s running away from a terrible secret. One that puts all of their lives in danger.
Now the vacation that Christine so desperately needed is ruined, but that’s the least of her worries. She has to use her wits and skills to save them all. Because she soon finds out that werewolves are very real. And they’ll stop at nothing to get their claws into her sister.

I’m Not Afraid of Wolves

This is a work of fiction. Names, characters, organizations, places, events, and incidences are either products of the author’s imagination or used fictitiously.

No part of this book may be reproduced or stored in a retrieval system or transmitted in any form by any means, electronic, mechanical, photocopying, recording, or otherwise, without express written permission of the publisher.

Join my street team at:
http://www.facebook.com/groups/erinsnerdcrew/

How to be a Mermaid

I’d Rather be a Witch

I Do Believe in Faeries

I’m Not Afraid of Wolves

How to Talk to Ghosts (Coming Halloween 2016)

Damned if I Do

Damned if I Don’t

Death is but a Dream

For Scout, my little wild cat.

“C’mon, Christine, you never do anything fun.”

I massaged my temples as I listened to my baby sister chide me for always working and never going out for a so-called “girl’s retreat”. I loved her to death, but she was relentless.

“It’s the perfect time for you to come out with us.”

Sara sounded smug, like she had expected my excuse. After all, I gave her an excuse every time she called. Nothing was ever relaxing with Sara though.

And this time, my excuse was the absolute truth. All I wanted to do was go to my house in Jacksonville, flop down on my bed, and sleep for a thousand years. Besides, with three new professional mermaids in the troupe, there was little chance of my boss, Neptune, giving me the time off. After ten years of working together, Neptune and I were more friends than coworkers, but there was such a thing as bad timing.

I had to get Sara to realize that.

Except, she got there ahead of me.

“Christine, please?” she asked. “Remember how fun your divorce party was?”

I snorted, my resolve softening. “That was a fun night,” I conceded. Marrying Shane at age twenty had been the biggest mistake of my life and when I was finally free of that emotionally abusive relationship two years later…well, I went a little crazy. I’d just been hired by Neptune’s World, and I wanted to celebrate this new lease on life. I dimly remembered a trip to Las Vegas and wearing my brand-new mermaid tail out in public.

Actually, I had to buy a new costume after that incident. That’s the way anything with Sara goes: it turns out both amazing and a complete disaster.

“And that was almost ten years ago,” Sara pressed.

“And you’ve just been working so hard since then. You really could use a break.”

Damn, she was making sense. I combed a hand through my hair and let out a long sigh. I was thirty-one-years-old, and if I didn’t have fun now, I’d wake up one day and realize that I was sixty years old without a good story to tell myself.

A part of me nagged that if that happened, it wouldn’t be a bad thing. My relationship with Shane was a rocky one, and I had finally managed to convince myself that love wasn’t for me.

A nice, quiet life. That’s exactly what I wanted.

“Where is this retreat?” I asked, knowing I was going to regret this.

“Northeastern Georgia, near the Chattooga River.” I had no idea where that was. “In the Chattahoochee National Forest.
Far
away from civilization. It’s the perfect place to just forget it all.”

And maybe that was exactly what the doctor called for.

“Let me talk to my boss,” I said through gritted teeth. I didn’t know why they were gritted; did I think I was making a mistake, or was it from the horrible memories of my failed marriage?

“I haven’t committed to anything.”

“—and once you give him that look, he’ll say, ‘Sure, Christine, how much time do you want off?’” She paused for emphasis. “Please, make it happen. I need you.” That last part came out in a whine. It was the same whine she used to persuade our parents to do anything when we were younger. Today, it struck a chord with me.

I exhaled, long and slow, screaming at myself to not agree to this. “I will try. No promises.”

“Yaaay!” she cried again. “We’re going to have so much fun. All of us girls.”

I mentally groaned. “What do you mean ‘all of us girls’?”

She said it like I knew who they were. And maybe, possibly, vaguely, I’d heard their names in the past. But this was the first time that Sara had mentioned anything about our girls’ retreat being anything more than just the two of us.

I should have known.

Hope they are her
good
friends.
I didn’t like the idea of spending four days with complete strangers.

“Can’t wait to see you, Christine!” she continued cheerily. “Call me back when you get the time off!”

The line went dead. I looked at it, frowned, and then sighed.

What did I get myself into?

“You know, every time I give a mermaid time off, she decides to leave the troupe,” Neptune said with a sideways grin. The old man was weather-beaten, sun-beaten—pretty much all sorts of “beaten” from hardships. He was missing teeth and a few marbles. But after everything, he had been something like a father and a best friend to me.

Actually, he was more like that crazy uncle that you were excited to see at Thanksgiving.

“Well, that’s because Alaina had her baby,” I said a little too defensively. “And Jordyn decided to stay home for her mom, and Tara—”

My cheeks deepened. “I knew that.”

I felt like I was letting him down. Neptune’s Mermaids were taking off internationally. After an incident at the Houston Aquarium back in November, we were put on the map. Newspapers heralded us as conservationists who garnered appreciation for the sea through performance.

Frankly, I just liked the feeling of the water around me

He sighed and sat back in his chair and rubbed his face. “Do you think the new mermaids are okay to perform without your lead?”

I considered his question. I’d been with the mermaids for ten years now, and five of that was spent with Alaina and three with Jordyn. We’d gotten to know everyone’s movements, how we worked, and were able to play off each other in the water. The new mermaids, Gabby, Murphy, and Liz, were all in their late teens and early twenties. Shelley had been with us four months now, and was very good at her job, and the other two weren’t far behind.

They were good. But could they perform without me?

Neptune smiled. “All right,” he said at length. “Time off granted.”

“I know what you said Christine, and that’s exactly why you should go on vacation.” He chuckled. “I’ve seen them perform, I know they can do it without you. I was just wanting to see what you’d say.”

“And if I had said they were all right?” I said, incredulous. “Would you have made me stay?”

“No, I still would have given you the time off.”

I guffawed. “So why ask the question then?”

“Because you have to realize that you need a break. You’ve been working too hard.” He got up from his spot at his desk—the old man never could sit for very long—and walked over to a side table that had a jade statue of a mermaid on it. I wasn’t sure where his obsession with mermaids came from, but it was enough for him to start the mermaid troupe twenty years ago. He picked up the statue and started turning it over and over in his gnarled, callused hands.

He used to be a sea captain. That was probably where all of this came from.

“You’ve been putting a lot of pressure on yourself because everyone’s been leaving,” he said. “But I’m telling you, take some time off. You’re not enjoying your performances as much as you should.”

“It’s because you’re tired. I think this will be good for you. Come back refreshed and ready.”

I almost snorted out loud. With Sara and her friends? It sounded like a great escape, but something would pop up. I was sure of it.

“And promise me you’ll come back to the mermaid troupe,” Neptune added, giving me a smile.

“Of course.”
If Sara doesn’t kill me first.

“You’re young, Christine,” Neptune said. “You need to take advantage of it.”

“And you deserve a bit of happiness. Lord knows we all need happiness.”

Neptune knew all about my divorce. He knew that I had to scrounge and fight my way out of that relationship. He knew of the abuse. I didn’t tell him everything, but he probably knew more than anyone else alive.

It was a bad time in my life, and I was glad to be past that.

I gave a bittersweet smile, more at the memory than anything else. “I agree.”

Neptune chuckled, which turned into a full body hacking. He barely, just barely, was able to put the mermaid statue back before he hunched over the side table with his coughing fit, using a hand to brace himself.

But he wasn’t fine. He half-waddled, half-crawled to the nearest seat, the spasms rocking him. I hurried to his fridge, grabbed a soda and popped the top, and handed it to him. He drank it greedily, tears streaming from his eyes.

“Thanks,” he said, when he could speak again.

I crossed my arms. “You need to see a doctor about that,” I said, even though I knew his stance on doctors. I didn’t know what it was about crotchety old men and doctors, but Neptune never wanted to see one.

He shook his head, which was the reaction I expected.

“I won’t go on vacation unless you go see a doctor,” I said.

“You drive a hard bargain.”

“I’m just smarter than you.”

“Good.” I wasn’t’ sure I believed him, but Neptune was pretty good about his promises.

“Now go,” he said, waving me away. “You have a few more performances before next week.”

You would think that after ten years of working with him, I knew not to call him that.

Still, I couldn’t help the grin as I slipped out the door and went off to the dressing room. We had a performance in an hour.

Despite everything that was going against it, this vacation was going to be fun.

I was actually looking forward to it.