Read In a Handful of Dust Online

In a Handful of Dust 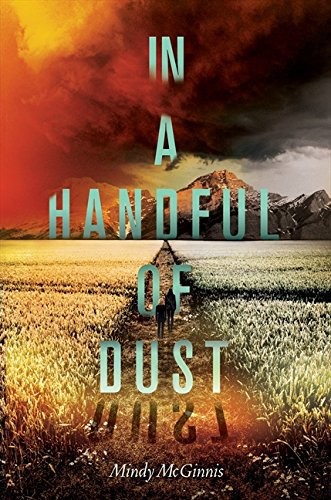 This is an advance reader’s e-proof made from digital files of the uncorrected proofs. Readers are reminded that changes may be made prior to publication, including to the type, design, layout, or content, that are not reflected in this e-proof, and that this e-pub may not reflect the final edition. Any material to be quoted or excerpted in a review should be checked against the final published edition. Dates, prices, and manufacturing details are subject to change or cancellation without notice.

The polio that had hobbled her hours before swept through her torso and stilled her movements. Only her pupils could convey the panic as her lungs collapsed. Her chest stopped rising and falling, but Maddy’s eyes rolled from Lucy’s face to the ceiling and back again for a few minutes after, clouding with confusion. Finally they were still. A rattle chased Maddy’s last breath out of her throat as Lucy held her friend’s hand.

Vera leaned across the bed to loosen her granddaughter’s grip. “She’s gone, sweetheart. You can let go now.”

Vera’s capable fingers closed around Maddy’s wrist, but she nodded before checking for a pulse. “You need to go wash up.”

“Use the boiled water,” Lynn said. She was standing at the foot of the bed, her arms crossed in front of her.

“I know,” Lucy said tightly, her throat still slick with tears. Lynn’s eyes flicked away from Maddy to touch on Lucy, and they softened slightly.

“Knowing and doing are two different things. Use the boiled water, then come back here.” Her eyes went back to the corpse, and her brow furrowed. “We need to talk.”

Lucy walked out of the stifling cabin and then down to the creek, grateful for the blast of fresh night air. She knelt by the flowing water and splashed her face free of tear tracks. A strong hand pulled her away from the water and she yelped, landing on her backside on the muddy bank.

“What’d Lynn say to you?” A stern voice came out of the darkness. “She told you to use the boiled water and first thing you do is come down here and stick your face in the crick.”

“Scaring me onto my ass is a hell of a way to remind me,” Lucy said, drying her hands on her pants. “You were outside?”

“Don’t have much else of a place to go. When your grandma’s tending the sick, I like to be nearby to help, what little I can do.” He put his hand out, helping her from the ground. “I didn’t mean to be so rough with you. Not an easy night for the living.”

Lucy leaned into him, inhaling his comforting smell, familiar all these years. Clean air and fresh dirt lingered around him, and she felt stray tears slip down her cheeks.

“Not easy for the dead either,” she said. “She was looking at me, those big eyes of hers full of fear like nothing I’ve ever seen before, and all I could do was sit there, Stebbs, and . . .” The spreading stillness that had clamped onto Maddy’s body seemed to have found Lucy’s tongue. “I heard the rattle, like Lynn always says you do. Then she passed, and everything was quiet.”

Stebbs tucked her head into his chest, and they walked back toward the cabin he shared with Vera. “True enough, there’s those that go that way. But in the silence you know they’ve gone. Something is missing.”

Lucy nodded her understanding. Though she’d asked Vera if she was sure, the wrongness of Maddy’s eyes had already answered the question. “I imagine you’ll be needing another mattress,” Lucy said, wiping her nose.

Vera’s reputation as a healer had spread beyond the boundaries of the small community; people traveled hundreds of miles to bring their sick to her door. Too often they died inside her walls, in her bed. Then anything the dead touched was condemned to flame.

The door to the cabin opened and Lynn stepped out, Maddy’s body shrouded in a sheet and curled in her strong arms. She spotted Lucy and Stebbs. “You want me to wait for you?”

Lucy nodded, and Stebbs gave her a quick squeeze on the shoulder before releasing her. “Don’t let her know I used the stream,” she whispered into his ear. “I’ll never hear the end of it.”

A breeze kicked through the tree branches above them, heavy with budding leaves. Lucy crossed her arms against the chill, grateful when Stebbs took off his jacket and handed it to her.

Vera came to the door of the cabin, her silhouette backlit from the candles within. “Stebbs,” she called into the darkness, “I’m going to need you in here.”

“Other people have come here to die. We’ve burned and buried plenty,” Lucy said, as he zipped the coat up for her, flipping up the collar against her neck. “But this is bad, isn’t it?”

“Yeah, little one,” he sighed. “I’m afraid this one will be different.”

Maddy had never been a large girl, but the deep blackness of the pit Lynn tossed her in made a mockery of the white sheet, reducing it to a pale smudge in the lingering light.

“Sorry about that,” Lynn said, after the body hit the ground. “There’s no nice way to get her down in there.”

Lucy shrugged. “’S okay,” she said, but the awkward angle of the body, dead or not, hurt her heart. Lynn’s hand, crusted with dirt, rested on Lucy’s shoulder and she reached up to take it.

As a child Lucy had believed Lynn could protect her from everything, call down the rain, and keep the coyotes at bay. Lynn had done all these things, but her face was grim at the thought of a threat she couldn’t fight with her gun.

“Your grandma thinks so,” Lynn answered. “Seems there’s different types, some worse than others. She wants to talk to us about it, when we’re through here.”

Lucy looked back at the crumpled white bundle. “Right,” she said. “When we’re through here.”

“You gonna be okay with this? It’s different when it’s one of your own.”

“Sounds like maybe it’s something I need to get used to,” Lucy said.

Lynn reached for the gas can at her side, dousing the body from the edge of the pit before tossing the match, her mouth a thin line. “No getting used to it.”

The black pillar of smoke rose behind them as they walked to Vera’s cabin to find Maddy’s mother cringing on a stool in the corner.

“I need to know when she first got sick,” Vera was saying. “Think hard about anything she said to you about feeling poorly.”

Monica had stayed away from Maddy’s bed as she died, unable to handle the sight of her only daughter smothering to death. Now her gaze was stuck to a spot on the floor, as if she might find answers in the pine knots there. When she finally spoke, her wisp of a voice was nearly lost in the creaking of the branches outside. “Sometime yesterday, maybe.”

Maddy and her brother, Carter, made no secret of their mother’s fearfulness. Carter had told Lucy once that even during good times Monica looked for the bad to come, and during the bad she was more likely to hide than face it. Now Monica’s shoulders seemed to slump under the weight of blame.

Lucy approached her friend’s mother cautiously, as if she were a half-wild kitten discovered in the grass. “You don’t have to feel bad about not knowing she was sick. Even if you’d brought her sooner, it wouldn’t have helped.”

“That’s true,” Vera said. “There’s no cure for polio, and this strain moved quickly. That’s why I need to know when things first went wrong. If the incubation period is as fast as I fear, we don’t have much time.”

Behind her, Lucy heard Stebbs mutter to Lynn, “If it’s as fast as Vera thinks it is, time’s already run out.”

Lucy moved closer to Monica, took the woman’s trembling hand. “How bad off was she when you brought her?”

“Pretty bad.” Monica sniffled, and a runner of snot was sucked back into her nostril. “When she came back from swimming with you and Carter, she said she had a headache. But it’s the first real hot times of the spring, and her diving into the cold water, I didn’t think much of it.”

“What was the first indication it was more?” Vera asked.

“She woke up in the night, crying something awful. Carter and me, we came running.” Monica used Lucy’s sleeve to wipe away the fresh tears coursing out of her eyes. “She was having spasms, and she thought it was a charley horse, you know? So she got out of bed to walk it off, and she—she—”

“She what?” Lynn broke in, patience expired.

Stebbs put a hand on Lynn’s shoulder. “She couldn’t walk?” he asked.

“When she tried she just fell over, said her legs weren’t working right. So her brother picked her up and ran her over here.”

“Carter brought her about two or three in the morning,” Vera said. “What time did you go swimming?”

“It was after we planted the seedlings,” Lucy said.

“About two o’clock, by the sun,” Lynn added.

“Is that fast?” Stebbs asked.

“Too fast to do anything about. Whatever source Maddy picked it up from, anybody who came into contact with it is already infected.”

The pale hand holding Lucy’s clenched in fear, and her own heart constricted at the words. “What about Carter?” Monica asked. “What about my son?”

“If he’s not symptomatic by now, he should be okay,” Vera said. “Which means you’re all right too, little one.”

Lucy let out the breath she’d been holding along with the woman next to her and nodded, any worries she had for herself only small drops on the wave of worry that had crashed over her at the thought of Carter being sick.

“You feelin’ all right?” Lynn asked. “No headaches or anything funny with your legs?”

“I’m all right, Lynn. Really.” Lucy waved Lynn off, but Lynn still looked her up and down, as if she expected to see the virus surface in the form of fleas or ticks. “Even if I wasn’t, it’s not something you can just pull outta me, you know?”

Monica’s sweaty hand pulsed inside Lucy’s own. “No, there’s nothing you can do,” she said, as if reassuring herself.

“So if the girl got sick after swimming in the pond, but her brother and our little one is all right, what does that mean?” Stebbs asked.

“It means the pond probably isn’t the source,” Vera answered.

“You’ve been drinking water from the pond after you’d
purified
it,” Vera corrected. “I wouldn’t rule it out.”

“It’s hard to say,” Vera said. “Polio is usually contracted person to person, but it can be waterborne.”

“So she got it from somebody else? But who else is sick?” Lucy asked.

And the first knock on the door came.