Read In the Graveyard of Empires: America's War in Afghanistan Online

In the Graveyard of Empires: America's War in Afghanistan 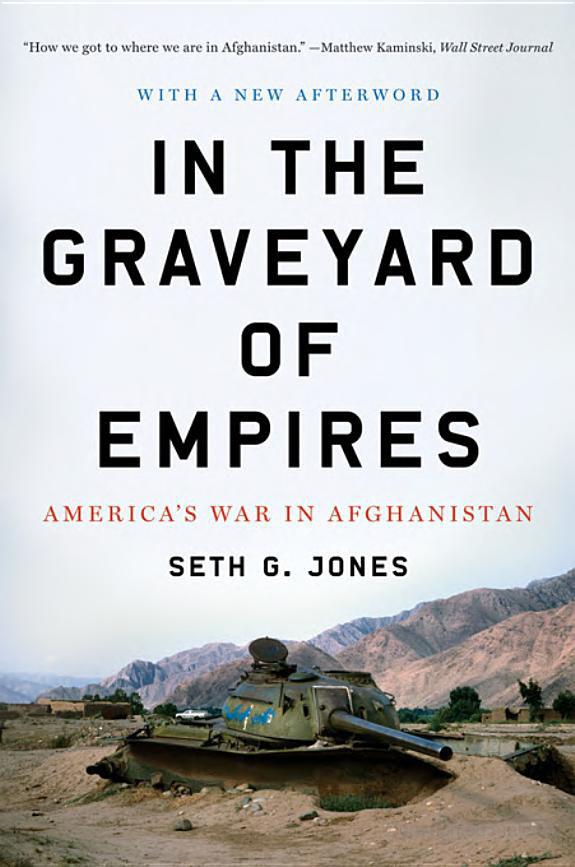 IN THE GRAVEYARD OF EMPIRES
ALSO BY SETH G. JONES

The Rise of European Security Cooperation

IN THE GRAVEYARD OF EMPIRES

Unless otherwise noted, all maps were created by Carol Earnest.

To those
struggling for peace
in Afghanistan

4. The Rise of the Taliban

9. The Logic of Insurgency

10. Collapse of Law and Order

1839–1842
First Anglo-Afghan War, which results in a crushing defeat for the British. The departing force is reduced from 16,000 to one British soldier.

1878–1880
Second Anglo-Afghan War culminates in the Battle of Kandahar, in which British forces decisively defeat Ayub Khan in September 1880.

1919
Third Anglo-Afghan War, which leads to the Treaty of Rawalpindi on August 8, recognizing Afghan independence.

1929
King Amanullah Khan, who had led Afghanistan to independence and attempted to modernize the country, is overthrown by Habibullah Kalakani, a Tajik. Kalikani is overthrown several months later, marking the start of a dynasty spanning five decades by the Pashtun Musahiban family. The first leader is Muhammad Nadir Shah.

1933
Upon the assassination of Muhammad Nadir Shah, his son, Zahir Shah, takes over at the age of nineteen, beginning one of Afghanistan’s longest periods of stability in recent times. For thirty years,
however, Zahir Shah remains in the background while his relatives run the government.

1963
Zahir Shah takes control of Afghanistan and introduces an era of modernity and democratic freedom.

1973
On July 16, Zahir Shah is overthrown in a coup d’état engineered by his cousin, Daoud Khan, with support of the Afghan army.

1978
Afghan army and air force officers engineer a bloody coup on April 27 in the Afghan lunar month of Sawr, and Daoud Khan is assassinated. Power is transferred to Nur Mohammad Taraki, who establishes the Democratic Republic of Afghanistan.

1989
On February 15, the last Red Army units roll across the Termez Bridge from Afghanistan and return to the Soviet Union.

1992
The United States ends arms shipments to the Afghan government and militia groups. Afghan groups conduct Beirut-style street fighting in Kabul, destroying parts of the city. Over the next several years, fighting in Kabul reduces the city to rubble.

1994
Taliban forces take control of the southern town of Spin Boldak in October and capture Kandahar in November, beginning the Taliban takeover of most of Afghanistan.

1995
Taliban forces advance northwest and northeast from Kandahar, capturing Herat in September and moving toward Kabul.

1996
Mullah Muhammad Omar removes the cloak of the Prophet Muhammad from the
Khirka Sharif
shrine in Kandahar in April and appoints himself
Amir al-Mu’minin
(Commander of the Faithful). Kabul falls to the Taliban in September.

2000
Taliban forces capture the northern city of Taloqan and take control of most of Afghanistan.

September 2001
The commander of the Northern Alliance, Ahmed Shah Massoud, is assassinated by al Qa’ida operatives on September 9. Two days later, al Qa’ida operatives hijack commercial planes in the United States and crash them into the World Trade Center in New York City and the Pentagon in Washington, DC. A fourth plane crashes in a field in Shanksville, Pennsylvania. On September 26, a CIA team led by Gary Schroen, code-named Jawbreaker, lands in Afghanistan and begins the U.S. effort to overthrow the Taliban.

October 2001
The United States begins its bombing campaign against the Taliban on October 7.

December 2001
Afghan political leaders sign the Bonn Agreement on December
5,
establishing a timetable for the creation of a representative government. The southern city of Kandahar falls to U.S. and Afghan forces on December 5–6, largely completing the overthrow of the Taliban regime. The United States narrowly misses killing
Osama bin Laden during fighting in Tora Bora, near the Afghanistan-Pakistan border.

March 2002 U.S.
and Coalition forces launch Operation Anaconda against al Qa’ida fighters and other militants in the Shah-i-kot Valley from March 2 to 16.

April 2002
In a speech at the Virginia Military Institute on April 17, President Bush urges a “Marshall Plan” for Afghanistan, calling for financial assistance.

June 2002
Afghanistan holds an emergency
loya jirga,
which leads to the selection of Hamid Karzai as head of a transitional government.

August 2002
Insurgents orchestrate a series of offensive operations in such provinces as Kandahar and Khowst. These attacks mark the beginning of the Taliban-led insurgency against Hamid Karzai’s government.

March 2003
Khalid Sheikh Muhammad, one of the prime organizers of the September 11 attacks, is captured in Pakistan on March 1. U.S. forces invade Iraq on March 20.

December 2003
Afghanistan holds a constitutional
loya jirga,
which discusses a new constitution. In early January, after several weeks of debate, it approves the constitution.

June 2004
Pakistani forces conduct an operation in the Shakai Valley after alarming intelligence reports indicate that a force of more than 200 Chechens and Uzbeks, some Arabs, and several hundred local supporters are gathering in the area.

May 2006
U.S. and Afghan forces launch Operation Mountain Thrust, the largest offensive since the fall of the Taliban, to quell the Taliban insurgency in southern Afghanistan.

September 2006
Operation Medusa begins in Kandahar Province against dug-in Taliban forces. It involves forces from such NATO countries as Canada, the United States, and the Netherlands. Afghan and U.S. forces initiate Operation Mountain Fury against insurgents in Paktika, Khowst, Ghazni, Paktia, and Lowgar Provinces. In addition, the governor of Pakistan’s North West Frontier Province reaches an agreement in Miramshah with a tribal grand
jirga
, in which the Taliban promise not to use the area to conduct attacks in Afghanistan. Over the next few months, however, the United States estimates that cross-border infiltration increased by between 300 and 400 percent in some areas.

November 2006
At NATO’s summit in Riga, Latvia, tensions surface over military contributions in Afghanistan. France, Germany, Spain, and Italy remain reluctant to send their troops to southern Afghanistan. The Netherlands, Romania, and smaller nations such as Slovenia and Luxembourg agree to ease their restrictions on deployment.

January 2007
British Royal Marines begin Operation Volcano to clear insurgents from firing points in the village of Barikju in northern Helmand Province. This effort is followed by Operation Achilles, a major offensive that starts in March and ends in late May.

July 2007
The U.S. National Intelligence Council publicly releases its estimate of
The Terrorist Threat to the U.S. Homeland.
The document concludes that al Qa’ida remains “the most serious threat to the Homeland” and that it has “a safehaven in the Pakistan Federally Administered Tribal Areas (FATA).”

December 2007
On December 27, former Pakistani Prime Minister Benazir Bhutto is assassinated during her election campaign. In testimony before the House Armed Services Committee, U.S. Secretary of Defense Robert Gates sharply criticizes some NATO countries for not supplying urgently needed soldiers and other aid as violence escalates in Afghanistan.

April 2008
President Hamid Karzai escapes an assassination attempt on April 27, as gunmen open fire during a military parade celebrating the nation’s victory and liberation from the Soviet occupation.

June 2008
During fighting along the Afghanistan-Pakistan border on June 10, U.S. forces kill nearly a dozen Pakistani Frontier Corps soldiers who are shooting at them.

July 2008
The Indian Embassy in Kabul is bombed on July 7, killing more than fifty people. In leaks to several newspapers, U.S. government sources acknowledge that Pakistan’s intelligence service is
involved in the attack. On July 13, insurgents launch a coordinated attack on a U.S. vehicle patrol base in Wanat, as heavily outnumbered U.S. and Afghan soldiers bravely fend off the assault.

August 2008
A United States AC-I30 gunship accidentally kills Afghan civilians on August 22 in the Shindand district of Herat Province. In an unprecedented move, President Hamid Karzai flies to Herat to meet with locals and condemn the “the unilateral operation of the Coalition Forces.” Pakistani President Pervez Musharraf resigns on August 18.