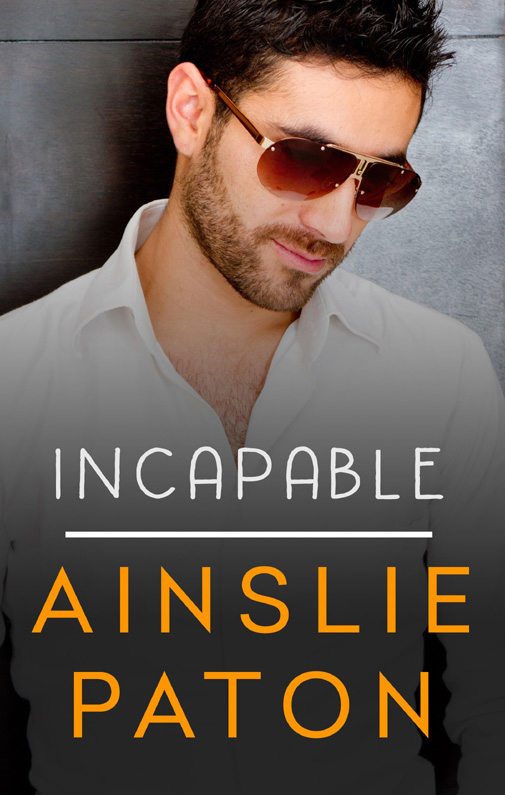 Love can be a great healer, except when it hurts…

Damon Donovan is used to three types of women: those who fawn, those who mother and those who want to fix him. So a reticent, prickly engineer he can neither awe nor charm triggers his interest.

A recording engineer and a voice actor should be a match to sing about, but the thrilling rhythm they create is soon drowned out by static. Georgia doesn’t know who she is, and Damon doesn’t know who he’ll become.

Can a man facing his insecurities and a woman afraid of her own instincts harmonise, or are they destined to sound good in theory, but be out of sync in life and love?

Ainslie Paton is a corporate storyteller working in marketing, public relations and advertising.

She’s written about everything from the African refugee crisis and Toxic Shock Syndrome, to high-speed data networks and hamburgers.

She writes cracking, hyper-real romances. Her other books include:
Grease Monkey Jive
,
Getting Real
,
Detained
,
Floored
and
Hooked on a Feeling
.
The other two novels in the Love Triumphs series are
Insecure
and
Inconsolable
.

For life and loss and bravery. For strength and insight and determination.

Taylor blasted her horn like she was announcing the grand opening of the gates of hell.

Damon set the alarm, shouldered his bag, pulled the front door closed and locked it. She started blasting again before he got across the pavement to her little car. He felt for the handle and swung the car door open as she pumped the horn the final two times.

He laughed. She was so always prompt. Taylor the reliable, the girl least likely to let you down, despite having the appearance of the girl most likely to mess you up. It amused them both she was trying to put one over him, which meant he had to tease her—as mercilessly as possible. It wasn’t going to be difficult.

“You put perfume on to go to the gym.”

“I did not.” She hit the blinker and pulled out from the kerb. The indignation in her voice could’ve starched his shirts.

“Cut grass. It’s going to make me sneeze.” He’d smelled it the second he sat down.

“Why would I put perfume on to go to the gym?”

“Waste of a good spritz.” He sniffed, then put his hand to his face to try to quell the itch. “Did you bath in the stuff?”

She thumped him, hard on the top of his thigh, and he should’ve seen it coming. “You did that for show.” He also should’ve gone for a hug before going for ritual humiliation. He’d missed her so much.

He sneezed again, let that second splutter stand for itself and felt the third one building at the back of his sinuses as she made a right-hand turn onto the main road.

He sneezed then laughed. It wasn’t often his nasal passages rushed in to help him get a rise out of Taylor. “You’re such a girl.” She was the same tomboy who’d gotten him into trouble on the farm when they were kids.

She flicked the blinker on again and turned left. “I’m not letting you out of the car till you tell me if it really smells like a fricking front lawn after a push mower’s been over it. It was expensive, fuck it.”

“First I’d have to know why the hell you’re wearing perfume to the gym.”

She pummelled the steering wheel. “I kinda had plans before you called.”

He swivelled in his seat to face her, the need to tease put aside. “Why didn’t you say? I could’ve called Jamie.”

“Was there a new man involved in these plans?”

Blinker on again. “None of your business.”

He cleared his throat, moment of sympathetic understanding over. “Couch, or possibly Buffalo. Grown on the south side, mowed with a Victa at dawn.” Did people wax on about perfume like they did about wine? No idea, but he was going for this.

If Taylor was attempting to date again, this was big news and he wanted in on it. He went for very round vowel sounds, David Attenborough via Pierce Brosnan. “A light frost was present at the time of harvest, adding a touch of petrol to the fragrance. A bouquet designed to bring out the best in expulsions of mucus.”

“I hope you fall off the treadmill and die.”

He held back a laugh and they pulled into the gym car park. “A lingering aftertaste of stale air conditioning with a high note of body odour.”

“I hope the elliptical smacks you in the head and gives you brain damage.”

Taylor was a locked safe in matters of the heart and he didn’t have the combination, none of them did. He could feel another sneeze building and shook his head to hold it off. “Best enjoyed by those who like their perfume to stimulate barfing.”

Taylor shut the engine off. “Why do I do the things I do for you?”

She threw her arms around his neck. “You big baby.”

He hugged her skinny body close, dragging her half into his seat to do it. “Thath’s my livethihood you’re dithing there.” His nose twitched and he sneezed again. “Geeth, Tay.”

She pulled his hair and pushed her face into his neck and he tried not to breathe her too deep.

“You going to tell me what the eau de lawn is all about?” Her no was the rub of her cheek against his collarbone. “Do I need to beat the bastard up for you?” He stroked a hand down her back.

She pulled away. “Yes. Beat him to a pulp. That’ll make me feel better.”

He nodded. “You point him out and his flesh is mine to bruise.”

She opened the door. “I still hope you come a cropper in there. Cut grass. It’s bloody Yves Saint Whosit and it cost more than a week’s rent.”

He got out his side and she’d already come around the car to meet him. “Why didn’t you ask me to get you something duty free?”

She snuggled into his side and he felt her shrug. “You’ve got enough to worry about without buying me perfume.”

“You only have to email what you want. Easy as.”

He stopped and she was forced to prop with him or let go his arm. “I’m serious. God, girl, the things you do for me. You filled the fridge with stuff, the freezer too.”

“Pasta, there’s nachos and that burnt fig, honeycomb and caramel ice-cream you like. I used the money you left me.”

“It’s not about the money. It’s embarrassing what I got paid for recording the game alone and you won’t let me buy you anything.”

She let go his arm. “I don’t want you or anyone buying me things. I can buy my own things, and if I can’t afford them, then I’ll wait till I can.” Her vowels weren’t round, but they were distinctly pissed.

It was going around. “That ticks me off, you know that.”

He growled, his Captain Vox signature growl—sardonic menace with a squeeze of humour. “Does the dickhead who stood you up come to the gym?”

“Cause you really have put me in the mood to take him down.”

He laughed and put a hand to her shoulder. “They don’t call me The Voice for nothing.” But the laugh was forced because Taylor’s insistence on doing everything the hard way made him grind his teeth.

She groaned. “You’re so full of yourself.”

“You’re so lawn at dawn.” He could feel her trying not to crack up.

They got through reception, flashing their membership tags, and stopped in the corridor separating the women’s and men’s change rooms. She gave him a shove towards the men’s. It only took a few minutes to find an empty locker, stow his bag, take his water bottle, earplugs and towel out, and meet her again.

When they got to the cardio floor, Taylor started laughing. “I might get my wish.”

“You on the floor, treadmill stack. They’ve put new equipment in since last time we were here.”

He groaned. The new machines would have new programs and interfaces; feel dissimilar underfoot and in his hands. All his regular settings would be redundant. Taylor was still laughing when they stepped onto side by side machines.

He felt around the console, identified the main stop, start buttons and the one to increase and decrease speed. “Where’s the earphone jack?”

She leaned over and plugged him in and then they were both off, running for the next twenty minutes. It was the same on the elliptical and the rowing machine, getting the speeds and tensions set the way he wanted them to test his fitness was a nuisance. It’d be less frustrating if he’d had more sleep. Maybe. It was easier in the free weights room. Everything familiar again. By the time Taylor flicked him on the chest with her towel to say she’d had enough, he was light-headed and needed grease.

They went to the food court adjacent the gym and he scarfed a hamburger with the lot and a strong black coffee and Taylor told him about the gigs she’d been auditioning for and joked about her day job, but she wouldn’t tell him who the perfume was for.

“You still want to surprise the guys?” she said, on the way to the car.

He did. He’d been away too long this time and it didn’t feel like he was home till he reconnected.

“Can I shower and change at yours?”

Bummed, she still felt she had to ask. “Only if you don’t use the new perfume.”

There was silence except for the engine kicking over. “Was it really that bad?”

She’d lost the ginger sting, she was all wet sugar disappointment, and despite the fact it’d made him sneeze he’d do almost anything not to hear Taylor sound defeated over a stupid fragrance.

“Nah, it wasn’t that bad, Trill,” he used her pet name, knowing she’d still think he was lying. “I probably picked up a bug on the plane. Let me put it on you when you’re ready.”

And she did. When they were both showered and dressed to go again, he sprayed just the right amount of perfume on his fingertip and painted it at the crook of her elbow, behind her left ear and in what little cleavage she had. He didn’t stop to think touching her there might be inappropriate. They touched each other casually all over the place and had since forever, but never with intimacy in mind. But she took a sharper draw on her breath and it made him tense, pull his hand away too fast, as if her skin might burn him.

Corkscrew by Donald E Westlake
His Old-Fashioned Love (Old-Fashioned Series) by Roberts, Laylah
A Kingdom Besieged by Raymond E Feist
Reached by Ally Condie
B000FC0RL0 EBOK by Stiller, Jerry
Demons Amongst Us (The Book of Demons Saga #2) by Dove, Raquel
For Cheddar or Worse by Avery Aames
Trail of Broken Wings by Badani, Sejal
The Bloody Quarrel (The Complete Edition) by Duncan Lay
Marcelo in the Real World by Francisco X. Stork