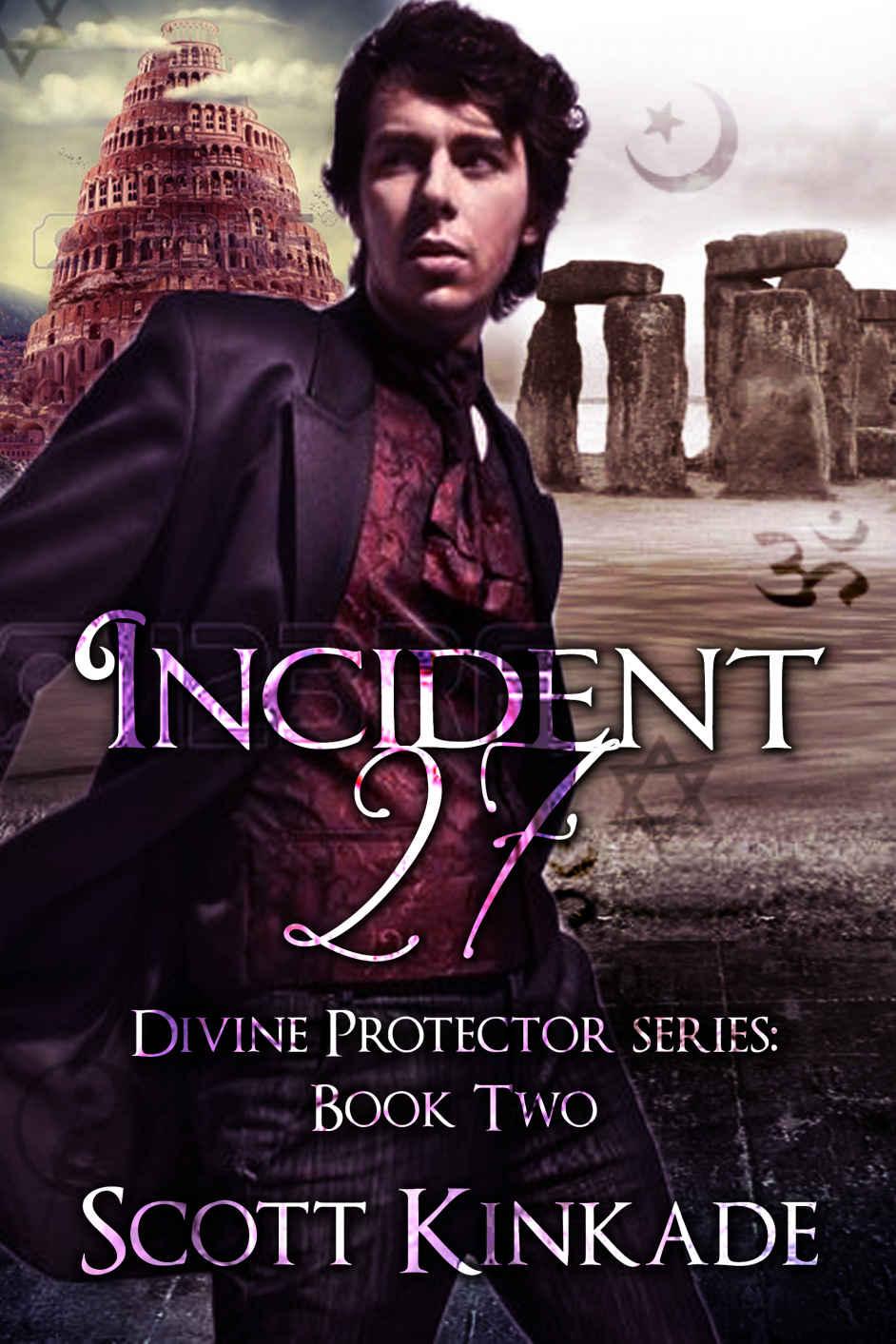 No part of this book may be reprinted or reproduced
without the expressed written consent of the copyright holder, except in the
context of a review.

The author has received no endorsements from the people
and properties mentioned in the afterword. The author has used their names
without their knowledge.

Ev
Bannen looked down at the emaciated shell before him. The withered thing could
barely be called human at this point. It was mostly bones and long, white
stringy hair. She couldn’t even breathe on her own.
What are you feeling
right now, Ev?
Freya asked via telepathy. The blonde goddess stood next to
him, her radiant curls a stark contrast to the corpse-like figure lying on the
bed.

Sadness. I guess. This might be the most depressing thing I’ve
ever seen
. Unlike Freya, he was merely a student at Divine Protector Academy, a secret school that trained people with certain potential to become gods.
As one of his professors—and a full god—Freya had accompanied him here to this
nursing home today. They weren’t physically here, though; Freya used her powers
to astral-project them from the Academy’s Prayer Chamber. Nevertheless, their
business here was deadly serious.

Take a good look, Ev. Remember when we told you gods had the
responsibility of choosing when it’s someone’s time? For this woman, that time
is now
.
She proceeded to read off what she knew about the elderly woman they had come
to see.
Nora Clark. Age ninety-three. Permanently hooked up to a respirator.
No chance for recovery. This is it for her. She’s lived her life and it was a
good one. Married twice, had four kids, twice as many grand kids, and lots of
close friends. She had a successful career as a school principal. But that’s
all over now. Do you understand?

Ev
nodded solemnly. He hadn’t been looking forward to this, and now that he was
here, he was scared to death.

She
perhaps sensed his doubts.
This isn’t murder, Ev. There’s no quality of life
for Nora anymore. We’re here to give her the peace she deserves. This is the
ultimate mercy
.

That
all made sense to him. Still...
It doesn’t feel right to me. Killing her,
just like that.
He snapped his fingers.

I share your distaste. But we’re gods. We have a responsibility.

He
sighed.
Let’s just get it over with
.

Freya
held out her hand.  A dark glow radiated from her palm.
Watch closely. This
is the opposite of what we use to heal people. It saps the subject’s energy,
gradually, until they die. So gradually, there’s no pain. But we can only do it
on someone who is in a catatonic state or otherwise unconscious. And we must
make certain there’s no chance they will ever recover before we do it.

She
laid her palm on the elderly woman’s chest. The dark energy spread out over
Nora Clark’s upper body.

The
machine next to Nora’s bed began registering her weakening life signs. After
about thirty seconds an alarm went off, signaling to the nurses something was
seriously wrong. They soon rushed into the room, but Ev and Freya weren’t
really there and so the nurses could neither see nor interact with them.

After
another minute all her vital signs were at zero. Nora Clark, who had lived a
rich and fulfilling life, was dead. The nurses attempted resuscitation, but to
no avail.

Ev
knew Freya was right. This was the best thing they could have done for her. Still,
the memories of the night he had killed his father weighed heavily upon him.
Dom Bannen had been a violent bastard, and one night he had decided to do away
with Ev’s mother once and for all. Ev did the only thing he could think of to
stop him. He grabbed a knife off the table and stabbed him in the side. His
father went down in a pool of blood. Ev Bannen had become a killer that night,
and that was something you could never undo.

They
returned to their bodies in the Prayer Chamber. Freya asked, “Do you understand
now?”

“Exactly.
We don’t want to do it, but someone has to.”

“I
just wish that someone didn’t have to be us.”

“It
wasn’t always this way,” she explained. “The shinigamis used to be ones responsible
for ending the lives of mortals.”

He
cocked an inquisitive eyebrow. “Shinigami? The god that worked for Zero Grade?”
Zero Grade was the organization of rebellious gods that had long been at odds
with the Academy.

“His
name wasn’t originally Shinigami. There used to be a whole clan of
shinigamis—the gods of death. However, almost all of them died out in the last
great war. The last surviving member took on the name Shinigami in order to
honor them.”

“But
then, why did he join Zero Grade?”

“Let’s
just say it was personal. It’s nothing you need to concern yourself with. The
past should be left where it is.

Out
in the hallway, Ev met up with his kinda-sorta girlfriend, Maya Brünhart. As
usual, she wore a white sweater to hide the scars on her arm where she used to
cut herself. Her dark bangs still had a bad habit of covering up her beautiful
face. “Hey, Ev. How did it go?”

He
shrugged. “About as well as can be expected. I’d be a horrible liar if I said I
enjoyed it.”

She
smiled at him. “And I wouldn’t find that a bit funny. We both know you’re too
good of a person to take pleasure in death.”

They
had met during their first year at Divine Protector Academy. Ev had taken an
instant liking to Maya. No one knew it at the time, but she was a double agent
for the vile god Belial. Belial had rescued her from the streets of Stiftung,
the capital of the Murnau Islands, and helped her awaken to her god-powers.
After that, he had her infiltrate the Academy as his spy. Her mission was to
lure a number of students into an ambush so Belial could collect their blood
and open portals to the dark realm of Gehenna and release the race of giants
known as the Nephilim. The Nephilim wreaked havoc in Stiftung before the Ev and
the rest of the Academy stopped them and put a permanent end to Belial. Ev was
just happy he had been able to achieve his true goal—to save Maya and bring her
back to the Academy. Since then, they had been incredibly close. Ev hadn’t asked
her out; to them, it was simply an unspoken understanding.

“So,
have you thought about what I asked you?” he said.

“You
mean, about going to your house for Lorntz Break and meeting your mother?” Lorntz
Break was the midyear week where students were able to go wherever they wanted
and not have to worry about classes.

“Sure.
I’d love to. I mean…” her mood darkened for a moment. “It’s not like I have any
other family to visit.”

Ev
gently stroked her cheek. “Hey, hey, hey. No more of that, OK? You’re not alone
anymore. I want you to be happy.”

Her
smile returned. “You always know what to say to cheer me up. You’re right; I’m
not alone anymore. I have friends now and people who care about me. I
appreciate you reminding me of that.”

A
trio of upperclassmen came striding confidently over. They were the absolute best
of their class, and always wanted everyone to know it. They took their status
as elite students so seriously, in fact, they made their own school uniforms
(even though the Academy had no such thing). Their uniforms were dark like
their souls, with matching, ties, vests and pants. They called themselves the
Awesome Three, but few people used that name.

“Well,
well, look who it is: Maya Brünhart, the Divine Protector Traitor.” Jorg
Trident had closely-cropped black hair and skin only a mother could love. It
was widely believed that before enrolling at the Academy, he had been in a fire
and received skin grafts from someone who was of a darker complexion than
himself. In any event, large patches of his arms, face and neck didn’t match.

“The
woman, feigning goodness, blights the land she travels.” Relm Masters was the
highest-ranked student, even in his own class. He loved more than anything to
remind others how intelligent and cultured he perceived himself to be, and that
meant speaking in prose. He had stylish red glasses and copper-colored hair.

“Seriously,
why
does
the Academy keep you around?” Priscilia Elipsen was the only
female in the trio. As such, her uniform had a skirt. Her beautiful silver hair
was bobbed-up in the back.

These
three lived to make Ev’s blood boil. “Why don’t you three piss off,” he
suggested.

“We
have every right to be upset with the Traitor,” Jorg argued.

“That’s
right,” Priscilia said. “Because of her, mankind was almost brought to its
knees. She should be in prison somewhere. Too bad there isn’t a prison for
gods.”

Ev
had heard more than enough. “Listen, you—!”

“Damn
right we are,” Jorg said.

“The
ruined princess, her actions wrong, yet her words full of truth,” Relm added.

Priscilia
laughed. “Even the Traitor acknowledges her crimes.”

The
Asshole Three continued on, laughing at Maya and Ev’s expense. Jorg said over
his shoulder, “You should kick her to the curb, Bannen. You’ll be a lot better
off.”

“Don’t
mind them,” Maya said. It was obvious, though, that she
did
mind. Their
words cut her to the bone, all because they were true. She had done everything
she was accused of. Both she and Ev had committed crimes they could not make
right.

Still,
that didn’t mean the world should continue to make her suffer for it. “Those
guys don’t know what they’re talking about. They didn’t even step foot in
Stiftung during the Crisis.”

“We
have to face the truth, Ev. Professor Strong said there would be consequences
for my actions. People can’t simply forget what I did.”

But
Ev wasn’t buying it. “Why can’t they see what a good person you are? If they
just got to know you…” He didn’t finish that thought. Even he could see the
absurdity of what he had just said. After what Maya had done, who
would
want to get to know her?”

Nevertheless,
Maya did have friends, including…

“Maya!”
Great timing, Ev thought. CiCi Decker came over and gave Maya a hug. “I just saw
those upperclassmen giving you a hard time. You want me to go kick their asses
for you?” Her pink pigtails were her most distinguishing feature.

Maya
perked up, shook her head. “That’s OK. I’m just glad I have friends like you to
look out for me.”

“Hey
guys.” Deep Matthews and Sahara Aloto came over to join them. They were
first-year students, having enrolled at the Academy following the Stiftung
Crisis. Deep was a black youth with a shaved head, while Sahara was white with
long auburn hair.

Sahara
concurred.
“Everyone’s so nice here, and we’re accomplishing far more than we ever would
have at a school for mere mortals.”

“Have
you given any thought to what kind of gods you want to be?” Maya asked.

Deep
replied, “Not yet. We just started, after all.”

“Don’t
feel bad about it,” Ev said. “Even I don’t know what kind of god I’m going to
become.” All students of the Academy eventually had to choose the type of
mortals they would represent. Some, like Freya and Maya, chose to be gods of
love, while CiCi wanted to become a goddess of relaxation. Ev wasn’t sure how
the latter was going to work out, but it was her choice.