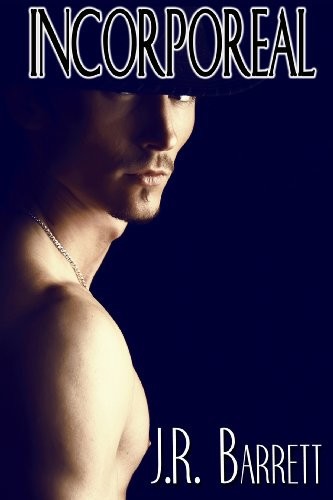 Warning: The unauthorized reproduction or distribution of this copyrighted work is illegal. No part of this book may be used or reproduced electronically or in print without written permission from the author, except in the case of brief quotations embodied in reviews.

This is a work of fiction. All events, names, characters and places are fictitious. Any resemblance to actual events, names, locales, organizations, or persons living or dead, is entirely coincidental.

Sara turned from the window, and clicked off her cell phone. Her lips moved, forming a silent, “Holy shit.”

Startled, her hand flew to her chest. “Christ! Would you stop doing that?”

“
I did not sneak up on you. I stood right here the entire time you spoke on the phone.”

Sara turned in a slow circle. “Stood where?”

She faced slightly away from the sink and glanced out the corner of her eye. She could just see the faintly glimmering shape of a man. “You could announce your presence once in a while. I really dislike the thought that you might be, well, you know, spying on me.”

Sara flipped open her computer and waited for it to boot up. She wanted to check her calendar.

“
What do you mean by the words, holy shit?”

“
I have no other way to
do it
. I’m incorporeal, remember?”

“
Yeah, as if I’m likely to forget. Go haunt someone else.” As she scrolled through her datebook, Sara heard a long-suffering sigh from over her left shoulder. “What?”

“
So soon?” Sara swiveled around on her chair. “It’s been two months. You showed up here two months ago and you refuse to leave.”

Sara heard his laughter, that familiar warm, deep, throaty laugh, and her stomach clenched. Yes, he had shown up two months ago, first in her shower, incorporeal, as he’d just reminded her, sending her screaming in terror from the
bathing room
; and then in her dreams, where he was about as corporeal as any man could get. Sara shivered despite the warmth of the room.

“
It’s not a matter of refusing to leave; I’m not permitted to leave.”

“
Well, why the hell not?” she grumbled. “Every other ghost leaves. They say a word or two, ask me to pass on a message, which I still refuse to do by the way, and they move on. So move on.”

“
I can’t comply with your request. It’s not up to me; I’ve already said as much. Besides, do you really want me gone?”

Sara glanced over her shoulder in the general direction of the voice. “Don’t press your luck.”

“
Why not? You like my
luck
, as you call it.” The low, suggestive whisper right beside her ear made Sara flinch, and not because he’d startled her again.

She could almost visualize him rolling his eyes and a corner of her mouth twitched. “You’re awfully nosy for an incorporeal being.” Sara sighed. “All right, I’ll tell you, but chances are you won’t understand what I’m talking about.”

“
I don’t understand half of what you talk about, Sara. I’m just curious, that’s all.”

“
Right.” Sara snorted. “You’re such a bossy ghost I keep forgetting how truly impotent you are.”

Oh, I hit the mark with that jab
.

He roared at her. “Impotent, you say? Wait until you fall asleep, woman, and I’ll show you impotent!”

Choking back her laughter, Sara managed to ask, “Is that a threat or a promise?”

“
Both.” He purred, and that one word sent Sara spiraling back into her dream.

“
Enough. I have work to do. I’ve been asked to pick someone up at the airport on Friday.” Sara studied her calendar. “I’ve got a meeting scheduled that day, but I might be able to switch it.”

“
Yup.” Sara couldn’t help it. She smiled and her smile felt a little smug, even to her. “I’m picking up a publisher.”

For a few seconds, there was complete silence in the kitchen. The lack of conversation surprised her. Sara had grown accustomed to his constant presence, even though he annoyed the hell out of her during her waking hours. She looked around the kitchen, scanning for his outline.

“
So someone is finally interested in your ghost stories, eh?”

“
You know, I really hate it when you move around like this. I like to know where you are. Can’t you wear bells or something?”

He snorted. “It’s just as tiresome for me to stand in one place as it is for you. At least you can get out. I’m trapped in this damn house, haunting you until, well, until I’m not haunting you.”

Sara rose from her chair and stretched. “I don’t know if she’s interested in my ghost stories, as you call them. I’ll see.” She filled the tea kettle with cold water and set it onto one of the gas burners. “I know it bothers you, but I’m going to make some coffee.”

“
Would you mind having tea instead?”

“
But I’m craving coffee and I’ve barely been able to use my new French press since you showed up.”

“
You can buy coffee anytime you want at that Starbucks place. I hate it when you make coffee. It’s downright cruel. I may not be able to drink it, but it smells so good. We didn’t have coffee when I was…”

Sara interrupted. “But it’s my house and I want coffee. I didn’t sleep well last night.”

The voice was right at her neck again and Sara shivered. She swore she could feel the warmth of his breath against her skin, but she knew damn well ghosts didn’t breathe.

“
It seems to me you slept very well.”

Sara turned around to face the ghost, despite the fact that she couldn’t see him. “Stop with the innuendos. You’re not being fair. I can’t help what I dream.”

“
I do not. You enter my dreams uninvited.”
Yeah right
. He spoke the truth and she knew it.

“
But not unwelcome, I should say.”

Sara turned the gas burner on. “At least I don’t have to worry about birth control in a dream,” she muttered.

“
I’m getting out the coffee grinder so you might want to make yourself scarce.” Ignoring his question, Sara pulled a bag of extra-bold Ethiopian coffee out of her freezer. She waved it in the air. “See? Pretend this is garlic. Be gone. I have work to do, I want a couple cups of coffee, and then I’m going for a hike. You skedaddle, you ghost.”

He snorted. She heard him say, “Garlic is for vampires,” and then the voice was gone.

Sara tilted her head and listened, but she heard nothing.
Blessed silence
. Of course that didn’t mean he’d stay away for long. She wondered where he went when he vanished from her hearing. She’d asked a number of times, but he’d never given her an answer. Well, perhaps he didn’t know much more about his state of being than she did. In her experience, a lot of ghosts were pretty clueless about the reasons for their predicament.

In truth, Sara didn’t mind his presence as much as she should. He was like a big, scary guard dog. Since he’d appeared, every other ghost had disappeared, and for that, Sara was grateful. This ghost business had become a real pain in the ass. They’d taken to dropping in all hours of the day or night. She could be in the midst of changing her clothes, or in the tub; it didn’t seem to matter to them. It was
me, my, mine
all the time. Fix this, fix that, talk to this person, talk to that person, find my wife and tell her blah-blah-blah.

Sara had dealt with ghosts her entire life and she’d wearied of their incessant demands. Spirits could request her help until hell froze over. She planned to continue to ignore them. Over the years she’d tried her best to do their bidding, to finish their unfinished work, and because of that she’d spent nights in police drunk tanks, hours in psychiatrists’ offices. One family had even threatened to kill her if she ever contacted them again.

That’s what you get for trying to help. A big fat label stuck on your forehead that says – Certifiable. Yeah, well, that’s what my mom thinks of me, I’m one hundred percent certifiable.

All those nights spent in terror, her head buried under the covers, crying her eyes out because the ghosts were all around and her mother wasn’t.

“
Shit! You did it again! I nearly jumped out of my skin.”

“
I thought you’d have the coffee made by now and I was tempted. I remember, Sara.”

Sara turned off the burner and poured a few tablespoons of whole coffee beans into the grinder. She ground them coarsely, dumped the fragrant coffee into the glass carafe, and poured in the hot water with a slow, steady hand. “Remember the fragrance of coffee, you mean?”

“
No, I remember your mother.”

At his words, Sara dropped the tea kettle. Before she knew what was happening, she’d been shoved clear across the room onto her backside, out of splatter range of the scalding water.

“
What the hell is wrong with you?” he growled. “You have to be more careful.”

Sara picked herself up and flipped open a cabinet. After grabbing a handful of dishtowels, she tossed them onto the spreading puddle and began to mop up the steaming water. “How did you do that?” It took every ounce of strength she had to keep the fear out of her voice.

“
I don’t know that I did. Perhaps you jumped.”

“
No,” Sara rose to her feet and set the tea kettle back on the stove. “I didn’t jump. You pushed me. No ghost has ever been able to touch me before, I mean, not in real life. And how the hell do you know my mother?”

There was no answer.

“
Goddamn you. Get your ass back here and answer my question.”

Sara spun in a circle to make certain he’d gone.
Ass is right. Yeah? Well he’s an ass who just saved yours. You could have thanked him
.

Thanked him? He’s the one who made me drop the tea kettle in the first place, by saying that… How did he know what I was thinking? And how does he know my mother?

The coffee forgotten, Sara reached for the phone. She needed to talk to a real live human being. She’d been spending far too much time alone with a dead man.

Eaters by DePaepe, Michelle
Trust by Roseau, Robin
The Goodbye Summer by Patricia Gaffney
Awakening: Dead Forever Book 1 by William Campbell
Every Whispered Word by Karyn Monk
A Breath of Snow and Ashes by Diana Gabaldon
Chicago Hustle by Odie Hawkins
Precious Blood by Jonathan Hayes
The James Deans by Reed Farrel Coleman
In Defense of Flogging by Peter Moskos