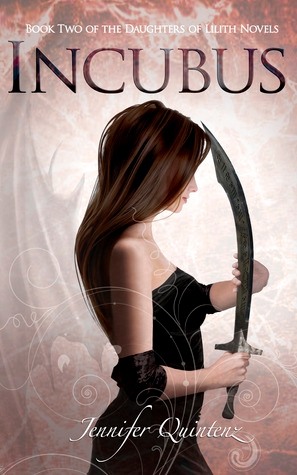 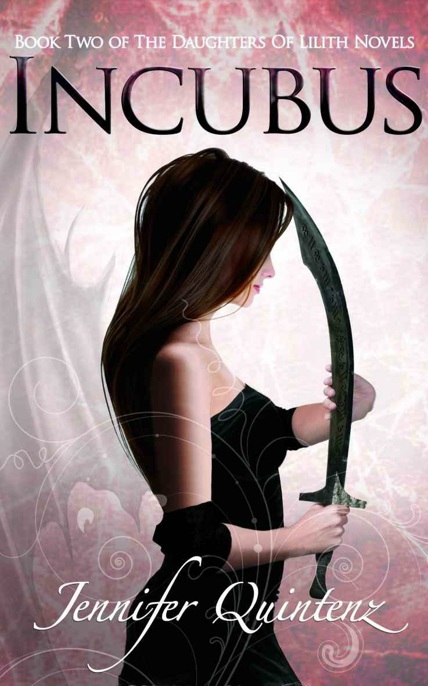 The Daughters Of Lilith:

All rights reserved. This book or any portion thereof may not be reproduced or used in any manner

quotations in a book review.

Published in the United States of America.

PUBLISHER’S NOTE: This is a work of fiction. Names, characters, businesses, places, and events are

either the product of the author’s imagination or used in a fictitious manner, and any resemblance to

Please purchase only authorized electronic editions, and do not participate in or encourage piracy of

copyrighted materials. Your support of the author’s rights is appreciated.

Find out more about the author and upcoming books online at
JenniferQuintenz.com.

To my sister, Manda.

Book two, and my list of acknowledgements continues to grow. I’m seriously indebted to a supportive

To my parents, who nurtured my sister’s and my interest in writing from the beginning. Dad, who

us to bookstores at least once a month to load up on new stories. Dot, who subscribed us to the

magical TLB Enchanted World Series. Clyde, who never tired of my questions on religion and

To some truly excellent friends. Bethany Lopez, whose support and sense of story was invaluable.

Josh Feinstein, who volunteered his mad-ninja editorial skills. Marc Manus (both manager and

friend), who gave excellent and thorough story notes from outline through drafts.

And finally, to Asher and James, who sacrificed in little and not-so-little ways to give me the

precious gift of time to write.

He has inscribed a circle

on the face of the waters

at the boundary between

The late September sunlight had its own kind of magic.

expansive aspen tree, setting each one aglow with an emerald fire. I tilted my head up, eyes closed,

letting the warmth seep in, welcoming it beyond my skin, through sinew and muscle, into my bones.

Some hidden part of me had been cold since last December. I lived with this fist of ice around my

heart, unable to pry free from its hold.

My eyelids snapped open. I felt the muscles of my back knot up. With effort, I forced myself to

pull in a long breath. As I let it out, I willed my body to relax.

In answer, I felt his warm fingers lacing through mine. Lucas stood next to me, distracted by the

stream of kids pouring out of the newly arrived school bus behind us. I don’t think he even realized

he’d taken my hand. It was an unconscious gesture, but it did more to warm me than the sun. I leaned

closer, breathing in the subtle spice of his scent. He sensed the motion and turned to look at me. I

smiled but he read something in my face. Concern clouded his eyes.

Lucas nodded. There was nothing else to say. The only reason he wasn’t having sheet-twisting,

sweat-drenched nightmares every night was that I policed his dreams. Even then, more than a handful

of times the Lilitu demon Ais had risen up before us, conjured by Lucas’s sleeping mind. In many

dreams we’d battled her together, fighting teeth and nails that glinted like steel, staring into glassy

black eyes. These fights were always epic and acrobatic—loosed from the laws of physics that dictate

everything in the real world, Lucas and I could run faster, leap farther, and fight tirelessly. Our dream

Fragmented memories of that night rose up, knife-sharp and aching to shred my forced calm. I

turned my attention back to the reason we were all here.

The Mission of Puerto Escondido sat perched in the foothills, about 15 miles away from the center

of Old Town. The monks who’d settled here hundreds of years before had picked a beautiful vantage

point. Piñon and juniper trees dotted the mountains that enclosed our little valley. Most of the town

was nestled comfortably in the lowest dip between the peaks. Standing in front of the mission, I could

see across the bowl of our valley, from the glimmering stand of old oaks that edged my neighborhood

to the wealthy foothill community on the other side of town.

As if glancing at his neighborhood was some kind of summons, Royal’s brand new, platinum two-

seater cut across the unpaved parking lot, kicking up a dusty plume in its wake. The kids nearest the

parking lot coughed and waved dust away from their faces, irritated. Irritation changed to interest as

they got a good look at the car. The Corvette Stingray convertible had been a present from Royal’s

father. If you asked Royal, he’d say it was an attempt to compensate for being chronically absent—but

that didn’t mean it wasn’t fun to drive.

“Told you.” I grinned at Lucas, feeling some of my anxiety melting into the background. Royal

was a grounding force in my life. Safe. Familiar.

“You said he’d make an entrance,” Lucas replied, unable to wrench his gaze off the gleaming

roadster, “but now I’m thinking you left out a few key details.”

“What?” I said innocently. “I told you he got a car for his birthday.”

“ A
car
—?” Lucas glanced at me, incredulous. “That’s like calling the Hope Diamond a pretty

“Which is technically true,” I shrugged, “depending on your taste in gemstones.”

Lucas smiled, shaking his head, then draped an arm over my shoulder. “Okay. Now I’m thinking I

put too much thought into your Christmas gift.” I elbowed him in the ribs. Lucas grunted, but his grin

In the parking lot, Royal emerged from this gleaming work of art, seemingly oblivious to our

classmates’ stares. He walked around and opened the passenger door for Cassie. She unfolded from

the car, smoothing her long black hair back from her face. She was beaming, flushed from the ride,

and when she spotted us she waved brightly. We moved forward to meet them at the edge of the

parking lot. Royal approached us casually enough, but as he got closer I could see the twinkle of

excitement in his eyes.

“Hm.” I said, tilting my head to one side critically. “I thought it’d be more—” I glanced at Lucas.

I’m sure it will get you from point A to point B. Maybe you can upgrade it in a few years. Get

“It’s an incredible ride and you know it,” Royal said, unruffled. He held up his car keys. “Just for

that, Cassie gets to drive it first.”

“I’d like to amend my former statement,” Lucas said.

“Too late.” Royal tossed the keys to Cassie, who plucked them out of the air gleefully. Lucas

“Although I do need a favor, so if anyone wants brownie points—” Royal jabbed his thumb over

his shoulder at the car behind him. “To be clear, brownie points get you behind the wheel.”

Royal lowered his voice. “My dad’s hired some SAT dude to come over and tutor me three times a

week. I could really use some company. This guy is way,
way
beyond plastic. Just watching him smile

all afternoon makes
my
cheeks hurt. Isn’t there some saying? ‘If you’re going to suffer, you might as

well make your friends suffer, too?’”

“Whatever. My misery basically demands your company. It’s the first rule of friendship.” Royal

turned beseeching eyes on Cassie. “Save me from Academic Ken Doll. You’ll have my eternal

“Thanks, study buddy.” Royal grinned, catching my eye for the briefest moment. I knew—and I

knew Royal knew—that if Cassie was going to go to college, she’d need some serious scholarships.

The kind of scholarships that started with an excellent score on the SATs. Which made me suspect

that this tutor might not be as lame as Royal would have us believe.

“So these brownie points,” Lucas began.

Behind us, Mr. Landon clapped his hands together, drawing everyone’s attention toward the doors

of the old mission. His portly stature and receding hairline—which might have made him the target of

students’ jokes—were easily overshadowed by a youthful enthusiasm for his subject. He was one of a