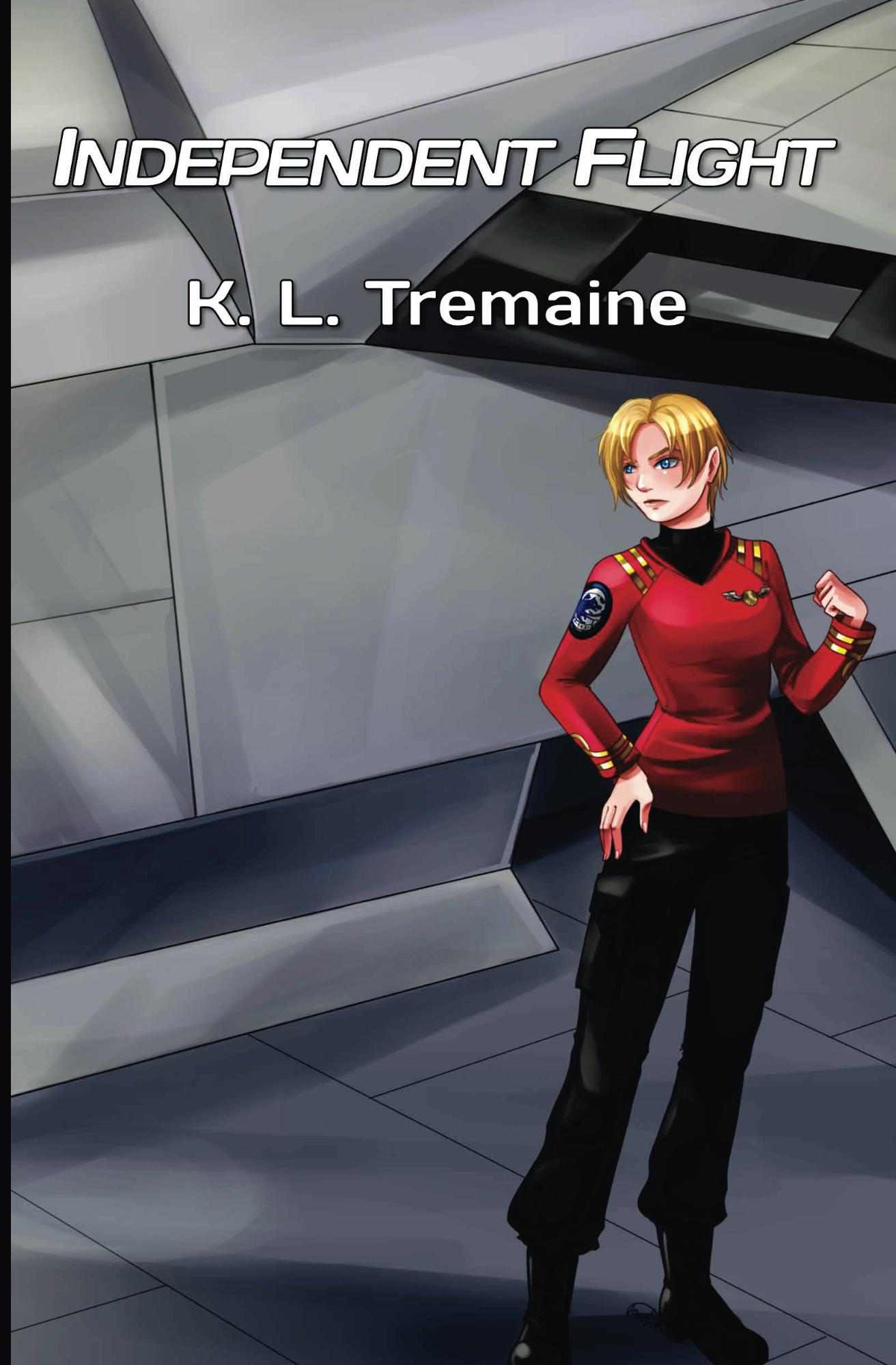 To
every woman who has looked at the night sky, wondering what’s out there.

Visit the author online at
http://artemisflightbooks.wordpress.com
Visit the cover artist online at http://azayuki.deviantart.com

No text comes into the world without a complicated birthing process mediated by the input and assistance of multiple people, who act simultaneously as
grandparent, parent and midwife.

Jaclyn Desiree Arceneaux, my primary editor; MinnSpec, Megan Kalka, Penny Horwitz, other members of The Royal Manticoran Navy (
http://trmn.org), Betsy Tremaine, and others, who were part of the process of taking the rough clay of my original text and turning it into the words on these pages.

Beth Kinderman of Beth Kinderman & the Player Characters, because the TV shows we love the most
do
drive us to drink, and sometimes to write.

“
I wish to have no Connection with any Ship that does not Sail fast for I intend to go in harm’s way.”

Space was a perfect, implacable, chill beauty that refused to be simplified. Within the simple sweep of the eye, galaxies beyond count glowed, making a distant carpet of stars and planets that always beckoned with its mysteries. Space
was
, and its emptiness was both eternal challenge to the bold and eternal caution to the wise.

Veronica Gray anxiously reviewed her assignment packet. She
had just completed a successful war gaming series in the Artemis System, and both the twin bars of her Lieutenant rank and the matching second full ring of braid on her cuffs were still shiny. She was the senior passenger on a lightly-populated shuttle with half a dozen Sub-lieutenants and Ensigns (she had to remind herself not to pronounce the lower rank as “en-swine,” she was a Lieutenant after all, and Lieutenants were supposed to be more mature than to engage in childish mockery of the lower grades!) and perhaps a dozen or so enlisted personnel flying with her.

The photos of her soon to be subordinates gazed back at her from the screen of her tablet. She
already knew two of them–one she was close friends with, the other she had learned from–and was closely perusing the files of the other two. The names were a mix of familiar and unfamiliar elements, the results of the inevitable project of cultural mixing of a human species that had been spreading through the galaxy for the last five centuries.

Veronica looked at her reflection in the window, then breathed some frost onto it and traced the outline of a starship with
a slender fingertip before the cabin heater wiped away the ice.

The subtle trace of her finger remained. Her mind
’s eye filled in the details of the starship she had just left a few days prior–the heavy cruiser
Aquarius
, pride of the Interstellar Navy. She had been Senior Officer Aboard during the ship’s six-month refit and the two months of shakedown that had followed, which although technically not a captaincy had entitled her to wear the coveted Red Jersey of a starship’s commanding officer. She was still wearing that jersey now; she hadn’t had time to change clothes since she got her new orders and was hustled onto a shuttle less than four hours ago, and in any case she was officially allowed to wear it until she was formally accepted to her new assignment on board the carrier
Avenger.

Aquarius
was big–at three-quarters of a million tons the
Aquila
class was almost half again the size of any other heavy cruiser in the fleet–but she was modest compared to a battle carrier
.
For now
Avenger
and her task group of fighters and escorts were a mere cluster of tiny chips of heat and light in the distance, but rapidly growing closer. Veronica felt the subtle quiver of the shuttle’s warp engine reversing the focused spacetime distortion that propelled it, dropping velocity at just under 3,000 meters per second-squared. Another slight rumble from the bow marked the uncovering of particle beam maneuvering thrusters for use, and she suppressed a chill of anticipation. The deck of a starship would soon be under her feet again.

She tapped her toes against the
shuttle’s flooring. The senior-most passenger was last-on and first-off of a shuttle, a tradition that dated back to the old Interplanetary Solar Space Agency back on Earth and Mars in the 21
st
Century. It was a perilous tradition; on the fortunately rare occasions when it really mattered, being first-off was far more likely to put an officer in harm’s way than to rush them to safety. But Veronica was hardly in a position to alter it one way or the other.

Measuring
eight hundred meters long and massing two million tonnes,
Avenger
was home to nearly seven thousand people and home base to nearly two hundred fighters, corvettes, bombers, and utility craft. Her companion destroyers and frigates were barely visible, holding formation hundreds of thousands of kilometers away to spread their sensor nets as far as possible. Between the vastness of space and the reach of modern communications, even a “close” formation spread out beyond any mundane frame of reference.

Corvette crews
were doing gear and system checks on their fighters when the Fleet Replenishment Shuttle landed on the deck. A shuttle-sized puff of moist air sighed out into space as the personnel transport slid through the force field barrier, set its wheels down, and rolled to a halt against the landing tractors. The shuttle’s warp engine was still spooling down from its flight and the bow-mounted retro-rockets were cooling from cherry-red, but its wings folded up and a folding ladder unfurled as the primary hatch opened. Veronica made her way down the ladder as soon as the telltale showed green, feeling as though she were almost floating–having grown up in 1.2g, fleet-standard 0.8g felt amazingly light.

“
Permission to come aboard?” A normal combat starship’s boat bay was relatively quiet, but that was because it was relatively small, holding only a single space-to-space pinnace and a handful of transatmospheric shuttles. A carrier’s primary flight deck was a thirty-meter-tall, cacophonous cavern packed with
hundreds
of craft and she had to strain to be heard over the din.

“
Permission granted,” replied the captain of the side party, a Chief Petty Officer, and reached out to shake her hand.

“
Chief? I’m Lieutenant Veronica Gray.” Veronica took his hand and shook it, showing no lack of strength in her grip. She suddenly felt glaringly conspicuous, a red jersey in a sea of sky blue--fortunately, she would be wearing the same once she reported in.

“
Gray, I’m Master Chief Fei Sha, flight engineer for
Four on the Floor
.” He pointed to a nearby spacecraft bearing the number 204 on her nose just above an exaggerated image of a hand on an ancient manual automobile transmission shifter column. “My plane commander, Lieutenant Commander Yuliya Saitova.” Saitova, a compact woman with nearly-black hair and piercing brown eyes, looked over the new pilot with the practiced eye of a veteran of space combat. Tomcats like
Four on the Floor
were tremendous hogs of deck, hangar, and elevator space; but the
Independence
-class carrier was built from the keel out with the oversized “fighter corvettes” in mind, so they weren’t nearly as awkward as on older carriers laid out for standard fighters. And the sixty-meter craft delivered an unmatched balance of speed, power, and range. “I’m glad to be here, Commander. Captain Fox sends his compliments, along with my transfer orders.” She held out the data chip.

“
Thank you, Lieutenant, but you want Captain Baldwin.” Saitova pointed to a man in a tan jacket, lazing against the right main-gear tire of another Tomcat. Veronica couldn’t quite make out his face, but she assured herself that it was there. Her cheeks colored as she recognized the newbie mistake she’d made.

“
I’d appreciate a place to go freshen up; this jersey’s about to be out of date in a few minutes, but I came straight from
Aquarius
without a chance to change.”

“
Locker room’s about fifty meters that way, behind the interceptors on the starboard wall.”

“
Don’t worry about it. Just freshen up and put a blue shirt on.”

Veronica managed a
sheepish grin at Saitova before turning to go. For all that she had come up through the Academy expecting to be a starship officer, Veronica was struck with the beauty and clean lines of the new corvettes. The heavy cruiser she had come from,
Aquarius
, was a massive bludgeon designed to take the worst the enemy could dish out and respond with overwhelming force. These little ships were stilettos: tiny and fragile, but capable of deeply wounding any enemy. Or perhaps piranhas–puny individually, unstoppable en masse. Transatmospheric parasite craft tended to resemble arrowheads, and these ones were bigger and sleeker than most; their fully unfolded wings would nearly touch the deck with the nose gear half-collapsed for the electromagnetic catapult tow to engage for launch. The Starfortress heavy bombers that sat on the flight line beyond them were pure space-to-space designs which paid no attention to aerodynamic niceties like wings; they resembled elongated eggs with weapon racks attached.

A few minutes later, her red jersey safely exchanged for blue, she walked out of the locker room.

Captain Baldwin’s tan jacket–which looked as though it was from the late twentieth century, CE, even though it
had
to be a latter-day reproduction–made more sense as he stood and strode forward, extending his hand. He looked a great deal like an actor –bluff, blonde, and even taller than her own hundred-eighty centimeters, and she smiled in spite of herself.

“
I’m Captain John Baldwin; Commander, Air Group.” Baldwin was an affable brick of a man, and his thump on her back was close to being enough to knock her over, but she weathered it and laughed.

“
I recognize you from your dossier, sir. It’s a pleasure to be aboard.”

“
I’m sure it is, Lieutenant. Ready to meet your flight crew on
Dog Two-Oh-Seven
?”

“
I can’t say I’m completely pleased with the Advanced Command Program thus far. I’ve had three ACP Lieutenants in the last two years that were definitely unready and unsteady. I think a couple of ‘em are flying desks right now.”

Veronica nodded, noting the implied threat as much as the apologetic tone of voice,
“I’m aware of the limitations of the program, sir. By the traditional track I’d probably be a First Lieutenant on a heavy cruiser right now; but the Navy sees a war coming with the Empire over the systems on our frontier with them, and we’re building up the fleet.”

“
And that’s why you’re here, Lieutenant Gray. You’re here to learn how to command a ship on the front lines, and I’m meant to teach you. So you’ll start as Second Tac Officer in the squadron–the second-junior piloting slot–and we’ll see how you work out.”

A tall black woman with
her hair in carefully-tended locks stepped down the ramp of the huge, sleek corvette bearing the number 207. Barely disguising her amusement, she came to a halt just in front of the two and snapped off a sharp salute that Baldwin casually returned. “Captain Baldwin,
Dog Two-oh-Seven
is ready for her command pilot.”