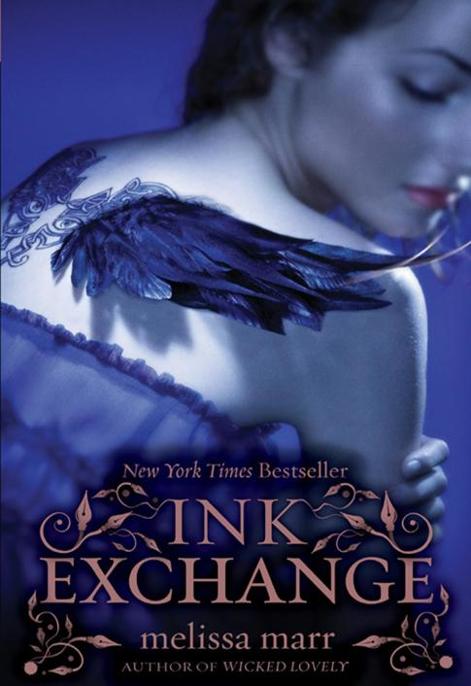 Other Books by Melissa Marr

To all the people who’ve been in the abyss and found
(or are finding) a way to reach solid ground—
you’re proof that the seemingly impossible can happen.

And to A.S., who shared his shadows with me—
I hope you found what you needed.

Irial watched the girl stroll up the street: she was…

Leslie slipped into her school uniform and got ready as…

After school Leslie headed out before Aislinn or Rianne had…

Irial stood in the early morning light, silent, one of…

The tattoo shop was empty when Leslie walked in. No…

Although Rabbit had told him where to find her, Irial…

Leslie slipped into the kitchen, leaned on the wall, and…

When Niall reached Verlaine’s, Irial had gone. Two of the…

Leslie walked down the hall of Bishop O.C., shoes held…

With a wariness that felt out of place in the…

By the end of the week, Leslie was more exhausted…

Niall knew better. He knew not to allow himself so…

Several songs later, Leslie was thankful for the long hours…

Leslie and Seth had gone several blocks before she felt…

Since the Summer King was looking elsewhere for him, Irial…

By the time Irial left, Niall was sure that the…

When Leslie woke with the nightmares still riding her, she…

“Leslie? Leslie!” Sylvie waved her hand in front of Leslie’s…

As Niall led Leslie through the street toward Seth’s train,…

Leslie woke in the middle of the night to see…

The morning was barely upon him when Irial walked into…

Half afraid last night had been a dream, Leslie looked…

They’d spent the day together playing video games, talking, and…

Irial woke with a scream half formed on his lips.

Leslie felt a compulsion riding inside her, leaving her with…

Irial watched Leslie walk away with the Summer Queen’s mortal.

Leslie and Seth were several blocks away before she finally…

Niall was only halfway into the front room of the…

It was evening when Leslie woke in her own room,…

Niall had walked out on his king; he’d failed Leslie;…

Leslie rolled over, out of Irial’s reach. Despite the vastness…

Snatches of time were nothing but blurs and blank spaces,…

Irial had spent several days watching Leslie struggle with the…

Over the next week, he pushed her until she was…

The moon was well overhead when Irial crept across the…

Niall had stopped by the loft to gather a few…

Leslie drifted in and out of consciousness for several days…

As he often had over the past few weeks, Niall…

Other Books by Melissa Marr

Irial watched the girl stroll up the street: she was a bundle of terror and fury. He stayed in the shadows of the alley outside the tattoo parlor, but his gaze didn’t waver from her as he finished his cigarette.

He stepped out just as she passed.

Her pulser her skin when she saw him. She straightened her shoulders—not fleeing or backing away, bold despite the shadows that clung to her—and motioned to his arm where his name and lineage were spelled out in an ogham inscription surrounded by spirals and knots that morphed into stylized hounds. “That’s gorgeous. Rabbit’s work?”

He nodded and walked the remaining few steps to the tattoo parlor. The girl kept pace with him.

“I’m thinking of getting something soon. I just don’t know what yet.” She looked defiant as she said this. When
he didn’t reply, she added, “I’m Leslie.”

“Irial.” He watched her struggle and fail to find more words, to make him want to notice her. She was starving for something. If he took mortals for playthings, she’d be good fun, but he was here for business, not collecting trinkets, so he kept silent as he opened the door of Pins and Needles for her.

Inside the tattoo shop, Leslie wandered away to talk to a dark-haired girl who was watching them warily. There were others in the shop, but only the dark-haired girl mattered. Because he’d made the curse that had bound summer so many centuries ago, Irial knew exactly who she was: the missing Summer Queen, the problem. She would change everything.

Irial had felt it the moment Keenan had chosen her, had stolen her mortality. It was why Irial had come to Rabbit: change was coming. Now that the Summer King would be unbound—and able to strike out at those who’d trapped him—true war was a possibility for the first time in centuries. Unfortunately, so was too much order.

“Spare a moment, Rabbit?” Irial asked, but it was a formality more than a question. Rabbit might not be wholly fey, but he wouldn’t turn down the king of the Dark Court, not now, not ever.

“Come on back,” Rabbit said.

Irial trailed his hands over one of the steel-framed jewelry cabinets as he passed, well aware that Leslie’s attention
was still on him. He closed the door and handed Rabbit the brown glass vials—blood and tears of the Dark Court. “I need the ink exchanges to work sooner than we’d planned. We’re out of time.”

“The fey might”—Rabbit paused and rephrased it—“it could kill them, and the mortals aren’t recovering well.”

“So find a way to make it work.
Now.
” Irial tried a smile, softening his expression as he rarely did for the dark fey.

Then he faded to invisibility and followed Rabbit back into the main room of the shop. Unhealthy curiosity made him pause beside Leslie. The others were gone, but she stood looking at the flash on the wall, lesser images than what Rabbit could draw on her skin given a chance.

“Dream of me, Leslie,” Irial whispered, letting his wings wrap around them both, enclosing them. Maybe the girl would get strong enough to withstand an ink exchange with one of the chosen faeries. If not, he could always give her to one of the weaker fey. It seemed a shame to waste a lovely broken toy.

Leslie slipped into her school uniform and got ready as quickly as she could. She closed her bedroom door softly, staying quiet so she could get out of the house before her father woke. Being retired wasn’t good for him. He’d been a decent father before—before Mom left, before he’d fallen into a bottle, before he’d started taking trips to Atlantic City and gods knew where else.

She headed to the kitchen, where she found her brother, Ren, at the table, pipe in hand. Wearing nothing but a pair of ratty jeans, his blond hair loose around his face, he seemed relaxed and friendly. Sometimes he even was.

He looked up and offered a cherubic smile. “Want a hit?”

She shook her head and opened the cupboard, looking for a tolerably clean cup.
None.
She pulled a can of soda
from the meat drawer in the fridge. After Ren had doped a bottle—and thereby doped her—she’d learned to drink only from still-sealed containers.

Ren watched her, content in his chemical cloud, smiling in a perversely angelic way. When he was friendly and just smoking pot, it was a good day. Ren-on-Pot wasn’t a problem: pot just made him mellow. It was Ren-on-Anything-Else that was unpredictable.

“There’s chips over there if you want some breakfast.” He pointed to a mostly empty bag of corn chips on the counter.

“Thanks.” She grabbed a couple and opened the freezer to get the toaster waffles she’d hidden. They were gone. She opened the cupboard and pulled out a box of the only type of cereal her brother didn’t eat—granola. It was nasty, but his pilfering stopped at the healthy stuff, so she stocked up on it.

She poured her cereal.

Sighing softly, Leslie sat down with her bowl of dry granola.
No fights. No troubles.
Being home always made her feel like she was walking on a high wire, waiting for a gust of wind to knock her to the ground.