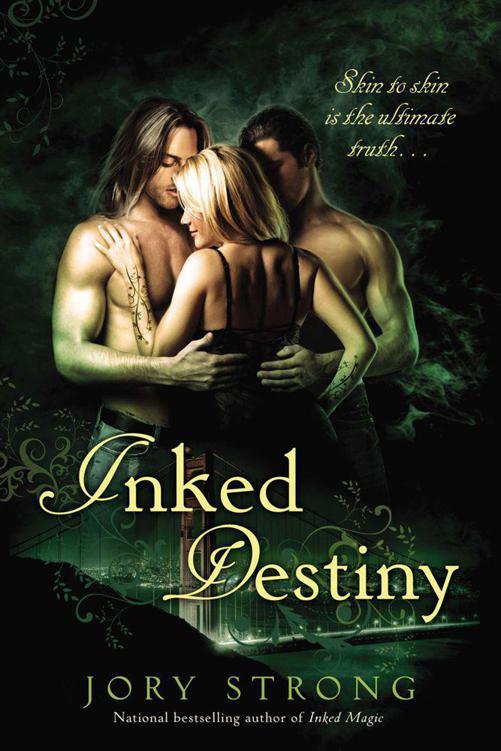 “Overflowing with sensuality, an intriguing story, and a great heroine, this is a book you won’t be able to put down.”

“
Intense, original and extremely sexy!
That’s what you can expect to find in Jory Strong’s new novel,
Inked Magic
. It captured my interest from the beginning and held it throughout the entire book.”

“I will definitely pick up the sequel.”

PRAISE FOR THE NOVELS OF JORY STRONG

“The world is gorgeous, the characters are fantastic, and the plots will draw you in!”

“Jory Strong will leave you hooked and hoping for more of this dark world.”

“Jory Strong writes an enthralling story which will quickly immerse readers in a futuristic fantasy.”

For more information about the Penguin Group, visit penguin.com.

This book is an original publication of The Berkley Publishing Group.

E
taín stood naked in the shower, hot water and the heat of the men on either side of her eradicating most of the chill that lingered following her rescue from the Harlequin Rapist. “I could get used to this,” she said, eyes closed to savor the sensation of masculine hands gliding over slick flesh.

The truth of their feelings was a hum against her senses. They might have ensnared her equally but their call differed. With Cathal it was raw sensuality and fierce imperative, while Eamon was the attraction of like to like.

Had she once truly believed she was okay with casual sex and lack of permanence? Before Cathal and Eamon had come into her life, true intimacy had been impossible.

Skin didn’t lie to her. It was her gift, her curse, to be able to touch the eyes inked into her palms to skin and not only see another’s memories, but take them. She shivered, because now that gift was changing and her control of it failing.

Cathal and Eamon were safe where others weren’t. She shivered again, harder, at thinking about how close she’d come to having to use her gift on the Harlequin Rapist to save herself.

“It’s over,” Eamon murmured, his hard cock pressed to her ass and lower back while Cathal’s was a heated announcement of need against her belly.

“Thanks to the two of you.”

If not for the tattoos—infused with Eamon’s magic—that she’d put on Cathal’s arms, creating a bond that allowed them to find her, even now her existence would be marked by cycles of torture and rape.

“Parker won’t be able to put off taking a report.” They were lucky no one of superior rank had been among the first responders. As an FBI taskforce member, her brother’s permission to leave had allowed them to escape.

She opened her eyes, taking in Cathal’s good looks, short dark hair and the ever-present stubble that came with being Black Irish. Opposite to Eamon’s long blond hair and smooth chest.

Until they’d come into her life, sex had been a safety valve, a way to release some hidden buildup of pressure from too much touch, too many bodies inked. And now…

It was so much more. Looking back, she was torn between amusement, for thinking it would be easy to enjoy them and walk away afterward, and fear when it came to what the future held.

Because of Cathal she’d been made an accessory to four murders. There would be a fifth when his father and his uncle caught up with the last boy who’d been involved in the drugging and rape of two sixteen-year-old girls. This wasn’t behind them. Not yet. Maybe not ever.

She slid her hands down Cathal’s naked back, pressed kisses along his throat. His eyes remained closed and she knew the cause. He didn’t want to see Eamon on the other side of her.

I’m not a man to share when I’m serious about a woman.

Then don’t get serious about me.

She’d warned him, but still a fist formed around her heart, squeezing at the threat he might come to regret his involvement with her, that in the end, he might walk away, unable to handle sharing her.

Her hand brushed over his hip on its way to curl around his hardened length. “I want you. I want you both. Let’s go to bed.”

They left the shower.

Cathal took the towel from her, sliding it over her body, lingering over breasts capped with dark pink nipples. Within days of meeting her she’d become the beat of his heart, the relentless, molten pour of lust pumped directly into his bloodstream so that time away from her had become the crawl of eons.

Her lips curved with knowing. “Like what you see?” she asked, echoing the question he’d issued when first joining her in the shower.

“Definitely.” He’d like it even more when sight was accompanied by taste and scent and the touch of skin to skin.

How to Read the Air by Dinaw Mengestu
Olivia's Trek (1) by DM Sharp
Then No One Can Have Her by Caitlin Rother
Unknown by Unknown
Prophecy, Child of Earth by Haydon, Elizabeth
Wives and Champions by Tina Martin
Project Enterprise by Pauline Baird Jones
Feral by Sheri Whitefeather
His Kind of Perfect (Sugar Bay #1) by Kinsley Gibb
Slow Dollar by Margaret Maron