Read Instances of the Number 3 Online

Instances of the Number 3 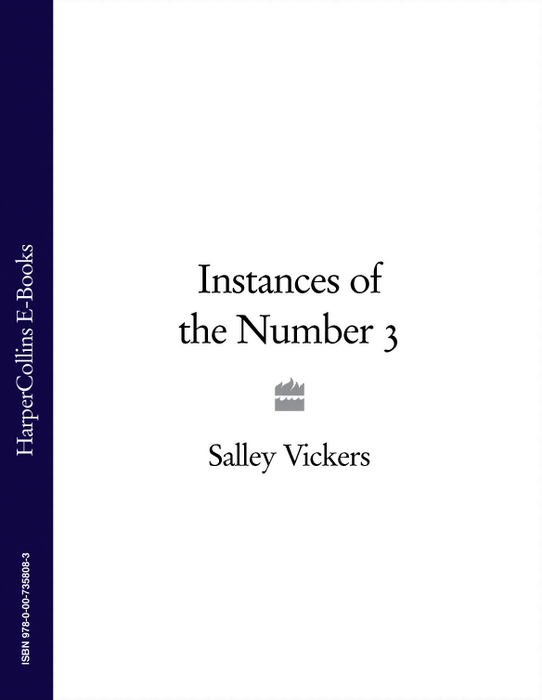 Instances of the Number 3
Salley Vickers

For Rupert Kingfisher,
whose play
The Prisoner’s Dilemma
first
suggested to me the creative possibilities in
the number 3

It must have required many ages to discover that a brace of pheasants and a couple of days were both instances of the number 2: the degree of abstraction involved is far from easy…

I doubt not of my own salvation; and in whom can I have such occasion of doubt as in my Self? When I come to heaven, shall I be able to say to any there, Lord! how got you hither? Was any man less likely to come hither than I?

It is said there were ancient schools of thought which held that the number 3 is unstable. If the reasons for this belief were ever known they are lost in time. A three-legged stool refutes the claim, as—less prosaically—we are told does the Christian trinity. Whatever the case, it is a fact that three is a protean number: under certain conditions it will tend to collapse into two—or expand into four…

After Peter Hansome died, people were surprised that his widow seemed to be spending so much time with his mistress. Bridget Hansome was not the kind of woman who could have failed to notice her husband’s discreet, but regular, visits to the flat in Turnham Green where Frances Slater lived. And, indeed, anyone married to Peter Hansome would have needed to learn the art of turning a blind eye. Had the various friends and acquaintances of the Hansomes’ been asked to bet on how the wife might deal with a mistress discovered in the aftermath of the husband’s death (were it the thing to gamble on the likely effects on a widow of the discovery of a long-established infidelity), the odds would probably have been on Bridget allowing Frances to attend the funeral, but with an unspoken provision that no mention be made of the reason for her being there.

In the event the punters would have lost their bets for this is not what occurred. In spite of the fact that she lived nearby—the cremation was conducted at a cemetery off the Lower Richmond Road—Frances did not attend
the funeral ceremony. She had a still lively recollection of a warm evening, on which the same cemetery had been the scene of one of Peter’s more flamboyant acts of lovemaking. Whether it was this, and the fact that she could not, therefore, easily reconcile herself to it as the place from which she must make a final farewell to the body that—flanked by marble angels and other funerary pieces—had lately enjoyed her own, must rest as one of those matters into which we shall not, for the moment, enquire. What is known is that on the day of the funeral, Frances took the Eurostar to Paris, where she concluded a walk by the Seine with a visit to Notre-Dame—stopping, before entering the cathedral, to buy a bunch of anemones from a flower seller.

Bridget Hansome was well aware that she was not the only woman to enjoy her husband’s affections. ‘Handsome is as handsome does!’ she had been in the habit of saying, making a small pun on her husband’s name. This observation was generally accompanied by one of her little ironic smiles. These smiles might have been described as affectionate, but they might equally have been described as sly. Whatever the truth of the matter (and it is also a truth that human emotion tends to be made up of different, and often competing, strands), Peter took the smiles in good part. He was a physically vain man and, not quite understanding the point of the saying—more accurately, for he was not stupid either, not really troubling to comprehend it—was mildly pleased to have a wife who appreciated his looks enough to joke about them, despite the fact that they brought with them certain consequences.

One of these ‘consequences’ was Frances. There had
been others—not too many—over the years, but Frances was the only one who could be said to have stuck. In fact it was Bridget herself who had been the cause of the introduction, during one of her trips abroad.

Early on in her marriage Bridget had discovered that her husband disliked her being away from home. It is unlikely that Peter himself was aware that his extramarital escapades had more to do with an incapability with his own loneliness than the outward appearance he was quietly proud of—women tending, perversely perhaps, to be more susceptible to marks of inward frailty than rugged good looks. It is a fact, however, that it is easier to be tender towards a failing when it is not part of one’s daily dealings. Bridget had been first alarmed, then concerned and finally increasingly impatient when she found that Peter became fractious, and prone to what she privately termed ‘sillinesses’, when she made one of her regular trips abroad.

Bridget sold old French bric-à-brac. She had started with a stall on the Portobello Road but now ran a thriving shop in Fulham, which traded in garden furniture, aged linen, enamel pans, lace curtains, parasols—items of faded beauty from a French pastoral past for which she had a particular eye. In these days of shabby chic such shops are commonplace. But Bridget, in perceiving that something worn and traditional might be what was missing from modern lives, had been in the vanguard of contemporary taste. It was she who pioneered the belief that the venerable might be more stylish than the smart—the glass and steel designs which were once the height of interior fashion for the well heeled. Ahead of her imitators, she became established as a ‘name’, of sorts; the ‘Living’ pages
of newspapers and magazines deferred to her for hints on the newest ‘old’ styles.

Bridget was also blessed with sources of supply for the items she sold in her shop—still-secret places in the heart of rural France which her later competitors had neither the luck nor the stamina to discover. The stamina was required for the combination of long drive and longer conversations in vernacular French, accompanied by large quantities of coffee or wine or, as the day went on, spirits drawn from complicated bottles. These tête-à-têtes would be conducted with elderly men or women in minor decaying châteaux, who were pleased to offload the mouldering relics of a bygone way of life to the blonde
Anglaise
who seemed sincere in her love of their country and its artefacts.

And there was no doubt that Bridget was sincere. One of her hallmarks was that she was a person who lacked ‘side’—too much so for some, who found her blunt. This did not mean, however, that she necessarily revealed all that she thought. Indeed, the years of living with Peter had taught her to keep many of her observations to herself, full revelation, she couldn’t help feeling, being something which was a virtue only among the reckless or the cruel. So that finally—for her rather late in the day—perceiving that her husband missed her, she did not voice this realisation directly but instead asked Mickey, who lived next door, if she would ‘keep an eye’ on Peter.

Mickey had lived in their terraced street since long before Peter and Bridget had married and bought their house. Although the house had not been fashionable when they bought it, they had had to scrape around to find the deposit as these were the days when Bridget was
just starting her Fulham shop and Peter had another wife and another establishment—one with children in it—to keep. The area had ‘come up’ since, but Mickey was a survivor of its more modest past, having inherited the house from her mother whom she had womanfully looked after till the day the old lady died.

‘It’s my pride my mum never saw the inside of a hospital,’ Mickey had said to Bridget when the latter had called asking to borrow sugar for the removal men’s tea, thus setting the tone for a relationship in which Mickey had continued, on and off, to supply sugar for twenty years. Mickey loved to chat and as Peter liked, in a certain mood, to chat himself—chatting being something which Bridget was conscious of not always sufficiently supplying either for her husband or her neighbour—the hope had been that Mickey might go some way to fill the gap made by Bridget’s periodic ‘French leaves’.

Mickey also liked her drink. Driving through the quiet countryside of mid France, observing the boles of mistletoe silhouetted in the columns of poplars against a wide azure sky, Bridget would think of her husband and Mickey sipping whiskies together; it was easier to feel fond of them both when she was away.

It was on just such an occasion, when Bridget was off in Normandy for a pre-Easter run, that Mickey invited Peter round. The weather was unseasonably fine, the sun quite searching for March, and they sat outside admiring the smart ranks of colour-coordinated daffodils in Mickey’s garden.

‘This is my friend Frances,’ Mickey had said, indicating a thin, dark woman, considerably younger than her hostess, but with what Peter was later to describe as ‘old’
eyes. It was not exactly the case that Frances was a ‘friend’. Mickey was liberal in her friendships and Frances turned out to be someone Mickey had met casually at the estate agents where she worked part-time on Wednesdays and Saturdays.

Frances was looking for a house in the area and Mickey, who liked to be of help (it was also to soak up some of that liking to help—where she was conscious of giving disappointment—that Bridget had made the suggestion about Peter), had asked Frances back for a drink to ‘give her an idea of what these are like’, since Frances had indicated it was such a house that she was hoping to buy.

In the end Frances bought a flat in Turnham Green, the prices of the Fulham houses having risen beyond her pocket, where, after a suitable lapse of time, Peter visited her during one of Bridget’s summer trips to the Vichy area.

‘I love my wife,’ he had declared, this being the gesture of fidelity to Bridget he was in the habit of making on such occasions. ‘If we are going to do this you must understand I will never leave her.’

And in saying he ‘loved’ Bridget Peter was not, as it happens, speaking to deceive. His liking for chat was not, as is sometimes supposed, a sign of superficiality, any more than a tendency to silence necessarily indicates depth. ‘Chatting’ was one of Peter’s means of helping himself to stay alive.

Frances, who had closed down an affair when the man was foolish enough to suggest that he was ‘misunderstood’, was not displeased to hear a man speak unashamedly of love for his wife. Although Frances was
not prone to introspection, unconsciously she was aware that as a man speaks so he is: a declaration of conjugal love was a sign of an affectionate nature—and a loyal one, of a kind. At least Peter was not going to ‘explain’ any entanglement with her as a product of ill treatment meted out to him elsewhere. Frances did not care to be seen as some sort of therapist—sexual or otherwise. She liked—as most of us do—to be liked for her own inherent qualities, good and bad, and not as a reaction to qualities in another person.

Frances was thirty-six when she first met Peter—an age when women often suffer degrees of anxiety about ‘settling down’. Whether her liking for Peter was as innocent of a reactive component as his was for her is another question entirely.