Read Into the Woods Online 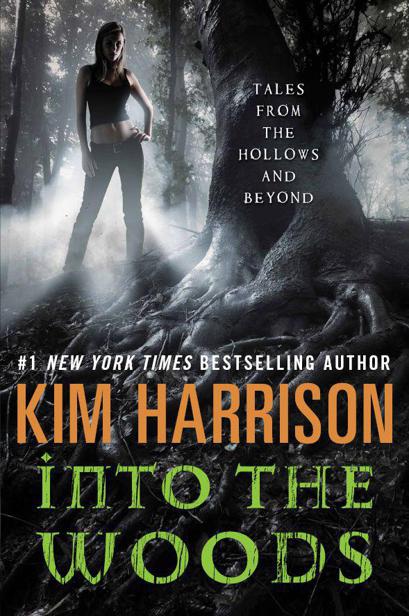 TALES FROM THE HOLLOWS AND BEYOND

To the readers. This one is for you.

Undead in the Garden of Good and Evil

The Bridges of Eden Park

Al is one of my more favorite characters in the Hollows. I never expected him to be anything other than the Big-Bad-Ugly—fun to hate, but nothing more. It was a surprise when Rachel began to understand him, and even more of a shock when Al responded not just by showing a softer side, but by lifting the veil on his past as well. “The Bespelled” was first published at the end of the mass market edition of
The Outlaw Demon Wails
, and it shows Al in his earlier mind-set of use and abuse. But the appearance of the blue butterflies gives evidence that even before Al met Rachel, he was beginning to find himself lacking and was looking for more.

P
aperwork
, Algaliarept thought in resignation as he blew gently upon the ledger book to dry the ink faster.
Ink that wasn’t actually ink, paper that had never been wood
, he thought as he breathed deep for the cloying scent of blood. Though blood made a sublimely binding document, the nature of it tended to slow everything down. Even so, if he could pass this part of his job to a subordinate, he wouldn’t. The knowledge of who owed him and what was worth a lot in the demon’s world, and familiars were known for their loose tongues until you cut them out. It was a practice Algaliarept frowned upon. Most of his brethren were bloody plebeians. Removing a familiar’s tongue completely ruined the nuances of their pleas for mercy.

Resettling himself at his small but elegantly carved desk, Algaliarept reached into a lidded stone box, dipping a tiny silver spoon for his Brimstone and letting the drug slowly melt on his tongue. The small tap of the spoon as he replaced it jolted through him like fire, and closing his eyes he breathed, pulling the air into him over the ashy blackness to bring a hundred faint smells to him as the Brimstone heightened his senses and took his mind into a higher state.

The East was where the world’s intelligence currently resided, and he quite liked the Asian people, even if they called him a dragon there, and expected him to breathe fire. Apart from the elves making a last stand in the mountains of Europe, Asia was the only real culture in the world right now—thanks to his efforts, mostly. One must create what another will covet.

Dipping his quill, Algaliarept bent to his work again, his brow tightening for no reason he could fathom. He was a dealer in flesh and seducer of souls, skilled in training people in the dark arts enough to make them marketable, then abducting them when they made a mistake in order to sell them to his peers into an extended lifetime of servitude. He was so good at it that he had achieved a status that rivaled the highest court members, reached on his own merits and owed to no one. Yet, as his quill scratched out the interest of a particularly long-running debt, he finally acknowledged the source of his growing feeling of dissatisfaction.

Where he’d once relished watching a potential familiar agonize over wanting more and thinking he was smart enough to evade the final outcome, now there was only an odd sensation of jealousy. Though doomed, the familiar was feeling
something
. Algaliarept, however, was feeling nothing. He’d lost the joy, and the chase had become too easy.

Another page tallied, and Algaliarept reached for a second spoonful of Brimstone while the red ink dried and turned black. As his silver spoon dipped, his moving reflection caught his attention and he hesitated, meeting his own gaze in the gilded mirror upon the desk. Tired, goat-slitted eyes stared back at him. They narrowed, and with a feeling of unhappiness, he watched himself let the black ash sift back into the box. If he wanted sensation, he should go out and take it, not sip it from dust
. Perhaps,
Algaliarept thought darkly as he touched his script to see if it was dry,
it was time to retire for a time.
Begin removing his name from the texts in reality to leave just enough for the occasional summoning instead of the numerous summons he fielded. He was weary of mediocre dealings and fast satisfaction that gave him nothing lasting. He wanted . . . more. Mood soured, he bent to his work.
This can’t be all there is
, he thought as he tried to lose himself in the beauty of wants and needs, supply and demand.

Intent on his work, the soft tickling in his nose almost went unnoticed until he sneezed. His hand slammed down on the open Brimstone container, saving it. Shocked, he stared at his door, tasting the air and trying to decide where the sun had just fallen. Someone was summoning him.
Again
, he thought with a sigh, until he realized where it was likely coming from.
Europe
?

Algaliarept’s gaze returned to the mirror, and his goat-slitted, red eyes glinted. A slow smile came over his creased face. Inside, a quiver of excitement coursed through him, more heady than Brimstone. It had to be Ceridwen. She was the only one who knew his name across that continent, the only one who could call him there.
Three months
, he thought, his excitement growing as he gazed into the mirror while his features became younger and more refined, taking on the strong jaw she was accustomed to.
I knew she couldn’t resist.

Humming a snippet of music that had never been penned, he shook out his sleeves, watching them turn from the casual silk kimono he appreciated into a stuffy European crushed green velvet coat. Lace appeared at his throat, and his hair slicked itself back. His ruddy complexion lightened, and white gloves appeared. He would be pleasing to her sight even if he thought the outfit ugly. Until she stopped three months ago without warning, Ceridwen Merriam Dulciate had summoned him every week for seven years. He was nothing if not patient, but the lapse did not bode well. That he was excited for the first time in as many weeks did not escape him, but Ceri was special. She was the most devious, intelligent, careful woman he had tried to snag in almost three hundred years, and he never knew what she was going to do.

Art
, he realized suddenly. Ceri was art where everyone else was work. Was that where his dissatisfaction was coming from? Was it time to stop simply working and begin making art? But to do that, he needed the canvas before him. It was time to bring her home. If he could.

Standing, he sneezed again, more delicately this time. His thoughts went to a seldom-used curse and he winced, searching his mind until he remembered. “
Rosa flavus
,” he whispered, shivering as the unusual curse shifted over him to leave a yellow rose in his grip. Damn his dame, this felt good. He’d bring her home this time. He was anxious to begin.

“Zoe!” he shouted, knowing the three-fingered man-whore would hear him. “I’m out! Take my calls!” And with no more thought, he allowed the summons to pull him from the splash of displaced time he existed in to reality.

He traveled by ley lines, the same force of nature that kept the drop of time he existed in from vanishing. The shock of the line melting him into a thought was a familiar ache, and it was with a sly confidence that he found himself drawn to a spot far up in the mountains of Europe. He never knew for sure where he was going until he got there, but this? Algaliarept smiled as the clean mountain air filled his lungs as he reformed, the stench of burnt amber that clung to him being replaced by the honest smell of horses and cultivated flowers. This was pleasant.

The hum of a binding circle grew oppressive, and Algaliarept found himself in a dusky garden surrounded by dark pines, the sky above them still holding the fading light of the sunset and fluttering blue butterflies. The circle holding him was defined by semi-precious stones inlaid in crushed gravel. Through the haze of energy trapping him came the sound of running water and birds. Music. A small orchestra. Something was badly off. And when his eyes went to the full moon rising above the fragrant pines, his smile faded in a wash of worry.
Is the bitch getting married
?

A soft clearing of a throat turned him around.

“Ceridwen,” he said, allowing a sliver of his annoyance to color his words, then he hesitated. She was absolutely stunning in the puddle of nearby lamp light with blue butterflies flitting about her. “Ceri, you are exceptionally lovely.”
Damn it to the two worlds colliding, she’s getting married. Directly
. He had tarried too long. It was tonight, or never.

The slight, fair-haired woman before him modestly ran her hands over her clearly wedding garb, white and trimmed with her family’s colors of maroon and gold. Her fair hair was piled atop her head but for a few strands artfully drawn down. She was pale and lithe, having wide green eyes and a narrow chin. If for no more than that, she would be unique among the predominantly Asian women populating the demon familiar market and bring a high price. But that wasn’t why he’d courted her so carefully.

Though her eyes were cast down demurely, she knew she was beautiful, reveled in it, vainly believed it was why he was attentive and kind to her. He’d kept her oblivious to the real reason he stayed pliant to her summons and demands for knowledge when anyone else would have been met with anger and threats years ago for the audacity of being too clever to be caught and therefore was wasting his time. She carried the surname Dulciate. It was one of the most desired familiar names in the demon realm, though if the castle behind her was the level to which the elves had fallen to, there wasn’t much left to take revenge upon. Even if she were ugly, he could make more from her then seven skilled familiars. And she was skilled, thanks to him—infuriatingly clever and careful
. Hopefully not careful enough
, he thought, his hands clenching in their white-gloved preciseness.

Behind her on the cropped grass, a round stone table was strewn with her golden tarot cards, clear evidence that she was upset. She knew he thought little of them, having spent summers striving to break her from their grip, failing even when he proved them false as she sought counsel from a power he didn’t believe in. Rising beyond the garden was the gray-walled castle of her family. It was pitiful by the Asian standards he appreciated, but it was the pinnacle of society in this superstitious, cultural wasteland. Where he’d created a society in Asia with science, rivals had inundated Europe with superstition in their attempts to match his gains.

The Trouble With Bodyguards: Part 2 by Kristina Blake
Through Glass by Rebecca Ethington
The Hour of the Cat by Peter Quinn
The Book of Names by Jill Gregory
The Mephistophelean House by Benjamin Carrico
Gently in the Sun by Alan Hunter
Lust, Caution by Eileen Chang
Captured by the Bodyguard by Dez Burke
Boo Hiss by Rene Gutteridge
Sorcha's Heart by Mumford, Debbie