Read Is It Wrong to Try to Pick Up Girls in a Dungeon?, Vol. 4 Online

Is It Wrong to Try to Pick Up Girls in a Dungeon?, Vol. 4 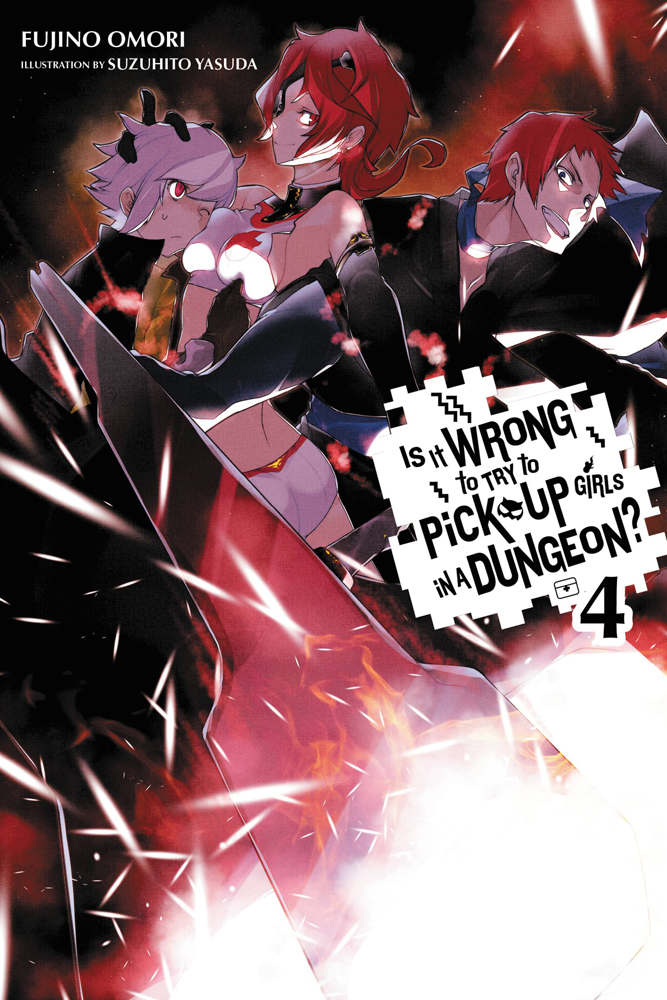 Prologue
FASTEST BOY IN THE ALLEYS

The Guild Headquarters was filled with the chattering of a lively crowd this morning.

The traffic of adventurers coming and going through the headquarters’ wide lobby was always at its peak between sunrise and noon. Of course some were visiting their adviser before heading into the Dungeon, but most of them spent their time reading notices that had been posted on the Guild’s announcement bulletin board overnight or talking with fellow adventurers.

Most of the notices contained information about new items on sale from the mercantile
Familias
or requests for specific drop items from the Dungeon. However, announcements about the strength of each
Familia
as well as sightings of rare monsters in the Dungeon were posted as well. The Guild posted all of this to assist adventurers in their travels.

What the adventurers learned today from this notice board could determine their luck tomorrow, not to mention their pay. Obviously, they couldn’t afford to ignore it.

Bathed in the strong sunlight coming in through the high windows of the Guild lobby, many races of human and demi-human swiftly went about their business.

“Whew…So many adventurers showing up today.”

Eina Tulle gave her coworker Misha Frot a light warning without getting up from her chair at the counter window.

Just as Misha said, more adventurers than usual were visiting the Guild on this particular morning. Eina and her coworkers knew that this was no accident; something had spurred the adventurers into action. She herself had been busy since early that morning and was just now able to catch her breath.

Usually around this time, adventurer traffic would be slowing
down to the point that some of them would try hitting on the cute receptionists at the Guild. Most days the girls would just roll their eyes, but today the would-be suitors were mercilessly shot down and shown the door so that those needing advice could come to the front.

“Denatus is coming up, so it looks like adventurers who leveled up are waiting around…But it has to be the news about you-know-what—that Minotaur that showed up on the ninth level.”

“…Yes, it certainly looks that way.”

Three days ago, there was an announcement that had made Level 1 adventurers’ eyes lose color.

It read: M
INOTAUR
S
IGHTED IN
U
PPER LEVELS
.

The notice, issued by
Loki Familia,
sent waves of fear through more than half of the adventurers in Orario. Demands for more detailed information had been coming in nonstop ever since.

Monsters appearing on floors where they weren’t normally seen was nothing new. In most cases, the monsters were encountered two floors above or below their recorded origin point. But this Minotaur was spotted on the ninth level, meaning that it had somehow journeyed up from the Middle Fortress. The earliest floor where Minotaurs were usually encountered was the fifteenth, six floors below.

The fact that this was not the first time a Minotaur had been seen in the upper levels was what really made the adventurers’ blood run cold.

It had been about one month ago—the day that Bell met Aiz—that the beasts had been spotted much higher than normal.

That particular incident had been caused by an accident during
Loki Familia
’s return from an expedition. Guild employees had explained this many times, but adventurers were not that easily convinced. Some adventurers claimed there had been a change in the Dungeon’s design that allowed Minotaurs to be born in the upper levels.

Eina and her coworkers were unable to dismiss it as an exaggeration.

For Level 1 adventurers, this was a matter of life and death. If monsters from the Middle Fortress were roaming the upper levels,
they couldn’t work. Understanding their fears all too well, the Guild accepted the fact that many would panic and did their best to quell the adventurers’ fears.

…Haven’t heard from him since that day, either. Is he all right?

Eina hadn’t seen Bell during the rush of adventurers, and it made her extremely nervous.

It had been less than a week since his last visit to the Guild, so she knew it was too early to be anxious…But Bell had nearly been killed by a Minotaur recently. Just hearing the monster’s name might make him take more precautions than necessary, though she couldn’t blame him.

Thoughts of Bell running through her head made Eina feel restless, an uneasy pulse throbbing in her chest.

Her friend’s needlessly long-winded voice caught Eina’s attention, and she looked up.

Sure enough, the boy’s signature white hair stood out from the crowd as he weaved his way toward the reception counter. Once he noticed Eina’s gaze, Bell blushed a little as he flashed a toothy grin.

“What’s this—doesn’t he look like he’s in a bit better mood than usual?”

This time Misha’s words rolled in her left ear and out the right. The warmth of relief ballooned within Eina, her pinkish lips curling into a smile before she took a deep breath and pulled herself together.

Watching Bell maneuver through the crowd like a rabbit through a meadow, she was a bit irritated that the boy had made her worry. However, relief won out.

“Good morning to you, Miss Eina!”

“Morning, Bell. It’s been a while. I probably don’t have to ask but…Working hard in the Dungeon?”

“Yep! Giving it my all! Although it’s been a few days!”

“Heh-heh, breaks are important, too. The body needs to rest, so a few days sounds about right.”

An even bigger smile bloomed on Eina’s face as she talked with Bell.

Sitting next to her coworker, Bell’s infectious good mood made Misha grin as well. She left her chair at the counter to give Eina some space. Sitting down at her desk, she set to work sorting the documents on it.

Eina’s eyes softened as she asked another question.

“So, did something good happen?”

“One look at you and anyone could tell.”

Eina giggled for a moment as Bell put a hand to his reddish cheeks.

She knew from the look on his face that Bell couldn’t wait to talk about whatever it was that had happened. Eina blinked her emerald eyes slowly and nodded her head, as if to say, “Go ahead.” The boy nodded back brightly. He hadn’t looked this happy since the day that he’d officially become an adventurer. Just behind Eina, Misha fought back a smile by biting her lip. The human girl backed away from the mountains of paperwork on her desk and slowly stood up, inching ever closer to the conversation.

He really can’t tell a lie
, thought Eina as she waited for Bell’s next words. A calm, warm feeling swelled within her; it was as if she were looking at her own younger brother.

Then Bell flashed his teeth again in another happy smile and a twinkle in his eye before saying, “I’m Level Two now!”

Misha’s paperwork fell to the floor with a great
swish
sound.

The human girl froze like a statue, her back toward Eina and Bell.

Misha had seen Bell’s paperwork on Eina’s desk before, so she knew that Bell hadn’t been an adventurer for even two months yet.

It was a beautiful smile.

A moment later, shock took over her face as she, too, froze.

To be more precise, time had stopped.

It was as if the two ladies were in a bubble; the usual noise of the lobby couldn’t reach them.

Did I hear that right?
That was the only thing she could think of to explain what she just heard. A dumbfounded smile still stuck on her lips, her head tilted to the side as her mind raced to find answers.

A corner of her mouth started twitching.

In too good a mood to notice Eina’s state of shock, Bell happily repeated himself, loud enough to be heard over the din.

The tension in her body that had built up passed her breaking point, causing her to shudder in her chair at the counter.

“Bell, when did you become an adventurer?”

Bell’s words hung in the air.

The human and half-elf shared a smile, the conversation fresh in their minds.

Another wave of adventurers had arrived and stood in line behind Bell, looking agitated and impatient as they waited.

Since Misha hadn’t budged an inch, the reception counter had become gridlocked.

Squeak!
Eina shot up from her chair—and exploded.

Her shrill scream cut through the commotion of the lobby.

Every Guild employee sitting in the office behind the reception counter suddenly jumped to their feet as Eina’s voice thundered through.

Taking the brunt of the blast, Bell broke out in a cold sweat as he leaned away from her.

Her Alphas by Gabrielle Holly
More Than Friends (Kingsley #4) by Brandi Kennedy
Unstable Prototypes by Lallo, Joseph
Deceptive by Sara Rosett
The Rider's Dangerous Embrace (An Interracial Bad Boy Romance Story) by Nicole Jordan
Because He Possesses Me by Hannah Ford
Come to Me by Lisa Cach
The Girl's Got Secrets (Forbidden Men #7) by Linda Kage
Razer's Ride by Jamie Begley
The Token 7: Thorn (A Token Novel) by Eros, Marata