Read Isla and the Happily Ever After Online

Isla and the Happily Ever After

BOOK: Isla and the Happily Ever After
>>DOWNLOAD HERE >>READ ONLINE NOW
ads 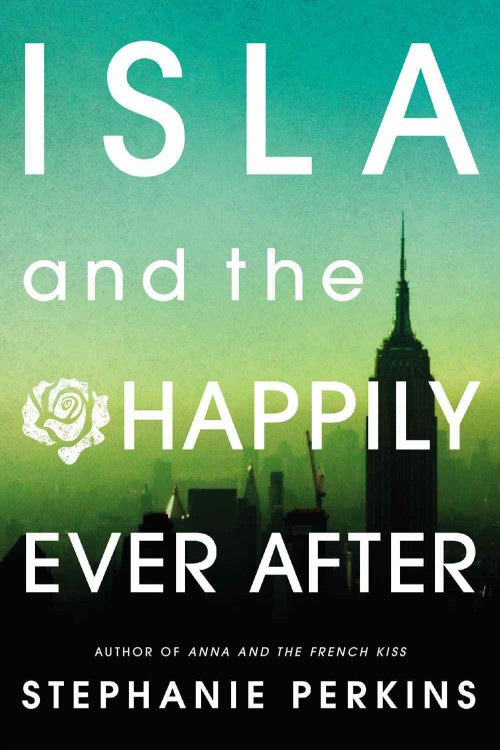 The café is boiling. The atmosphere is clouded with bittersweet coffee. Three years of desire rip through my body and burst from my lips: “Josh!” His head jolts up. For a long time, a very long time, he just stares at me. And then…he blinks. “Isla?”

Hopeless romantic Isla has had a crush on brooding artist Josh since their first year at the School of America in Paris. And, after a chance encounter in Manhattan over the summer break, romance might be closer than Isla imagined. But as they begin their senior year back in France, Isla and Josh are forced to face uncertainty about their futures, and the very real possibility of being apart.

Set against the stunning backdrops of New York, Paris and Barcelona, this is a gorgeous, heart-wrenching and irresistible story of true love, and the perfect conclusion to Stephanie Perkins’s beloved series.

Praise for
Anna and the French Kiss

“Stephanie Perkins captures all the agony and ecstasy of a blossoming new relationship in this shamelessly romantic story.” JULIA ECCLESHARE,
Lovereading4Kids

“Unashamedly dreamy and bursting with romantic tension.”
The Bookseller

“A…refreshing and life-affirming story which convinces us that love really does make the world go round.”
The Lancashire Evening Post

“A beautiful contemporary romance set in one of the most beautiful cities in the world.”
Fangirlish

“The best kind of YA romance. The BEST.” MELISSA COX, Waterstones

“The best book I read in 2013… Every page, every sentence was full of wild adventure and the magic of possibility.”
Milelongbookshelf

Praise for
ANNA and the FRENCH KISS

Fall in love with more from Stephanie Perkins…

It’s midnight, it’s sweltering, and I might be high on Vicodin, but that guy – that guy
right over there
– that’s him.

His posture is as familiar as a recurring dream. Shoulders rounded down, head cocked to the right, nose an inch from the tip of his pen. Absorbed. My heart swells with a painful sort of euphoria. He’s close, only two tables over and facing my direction. The café is boiling. The atmosphere is clouded with bittersweet coffee. Three years of desire rip through my body and burst from my lips:

His head jolts up. For a long time, a very long time, he just stares at me. And then…he blinks. “Isla?”

“You know my name. You can
pronounce
my name.” Most people call me Iz-la, but I’m Eye-la. Island without the
nd
. I erupt into a smile that immediately vanishes.
Ouch.

Josh glances around, as if searching for someone, and then cautiously sets down his pen. “Uh, yeah. We’ve sat beside each other in a ton of classes.”

“Five classes beside each other, twelve classes together total.”

“Right,” he says slowly. Another pause. “Are you okay?”

A guy who looks like a young Abraham Lincoln with a piercing fetish tosses a single-page laminated menu onto my table.

I don’t look at it. “Something soft, please.”

“But no tomato soup, chocolate pudding, or raspberry applesauce. That’s all I’ve had to eat today,” I add.

His mood darkens again. “Whatever.” He snatches up the menu. “Allergic to anything? You kosher? Vegetarian?”

“I’ll have a look in the kitchen.” And he stalks away.

My gaze returns to Josh, who is still watching me. He looks down at his sketchbook, and then back up, and then back down. Like he can’t decide if we’re still having a conversation. I look down, too. I’m getting the increasingly alarming notion that if I keep talking, tomorrow I might have something to regret.

But…as if I can’t help it – because I
can’t,
not when I’m around him – I glance up. My veins throb as my eyes drink him in. His long, beautiful nose. His slender, assured arms. His pale skin is a few shades darker from the summer sun, and his black tattoo peeks out from underneath his T-shirt sleeve.

Joshua Wasserstein. My crush on him is near unbearable.

He looks up again, too, and I blush. Blushing. The curse of redheads everywhere. I’m grateful when he clears his throat to speak. “It’s strange, you know? That we’ve never run into each other before.”

“Oh.” He fidgets with his pen. “I meant in the city? I knew you lived on the Upper West, but I’ve never seen you around.”

My chest tightens. I knew that about him, but I had no idea that
he
knew that about
me.
We attend a boarding school for Americans in Paris, but we spend our breaks in Manhattan. Everybody knows that Josh lives here, because his father has one of the New York seats in the United States Senate. But there’s no reason for anyone to remember that I live here, too.

“I don’t get out often,” I blurt. “But I’m starving, and there’s nothing to eat at home.” And then, somehow, I’m dropping into the empty seat across from him. My compass necklace knocks against his tabletop. “My wisdom teeth were removed this morning, and I’m taking all of these medications, but my mouth is still sore so that’s why I can only eat soft foods.”

Josh breaks into his first smile.

Accomplishment puffs up inside of me. I return the smile as full as I can, even though it hurts. “What?”

“Oh, shit.” I tuck up a leg and smack my kneecap on the table. “Am I acting that loopy?”

He laughs with surprise. People always laugh, because they don’t expect words like
shit
to come out of someone so petite, someone with a voice so quiet, so sweet. “I could just tell something was different,” he says. “That’s all.”

“Side effects include the cruel combination of exhaustion and insomnia. Which is why I’m here now.”

“Not really. But definitely in a few days.”

Our smiles fade into a reflective silence. We’ve rarely spoken to each other at school and never outside of it. I’m too shy, and he’s too reserved. Plus, he had the same girlfriend for, like, for ever.

They broke up last month, right before her graduation. Josh and I still have our senior year to go. And I wish there were a logical reason for him to show a sudden interest in me, but…there’s not. His ex was tenacious and outspoken. My opposite. Maybe that’s why I’m startled when I find myself pointing at his sketchbook, eager to prolong this temporary state. This miracle of conversation.

His arm shifts to block the exposed drawing, someone resembling a young Abe Lincoln. “I was just…messing around.”

He looks a bit sheepish as he pulls back his arm, but he only shrugs. “And the couple in the corner.”

I twist around to discover a middle-aged man and woman, all the way in the back, sharing a copy of the
Village Voice.
There isn’t anyone else here, so at least I’m not too out of it. I don’t think. I turn back to Josh, my courage rising.

I asked. I can’t
believe
that I asked. I’ve always wanted to look inside his sketchbooks, always wanted to
hold
one. Josh is the most talented artist at our school. He works in several mediums, but his real passion is the comic form. I once overheard him say that he’s working on a graphic novel about his life.

An autobiography. A diary. What secrets would it contain?

I content myself with doodles viewed over his shoulder, paintings drying in the art studio, sketches tacked to the doors of his friends. His style is almost whimsical. It’s melancholy and beautiful, completely his own. The lines are careful. They reveal that he pays attention. People don’t think he does, because he daydreams and skips class and neglects his homework, but when I see his drawings, I know they’re wrong.

My cheeks burn again – as if he could hear my thoughts – but then I realize…he
is
studying me. Have I overstayed my welcome? His expression grows concerned, and I frown. Josh nods towards the table. His sketchbook is already before me.

I laugh. He does, too, though it’s tinged with confusion.

His book is still open to the work in progress. A thrill runs through me. On one page, Abe’s face stares with boredom at the sketchbook’s spine. Even the rings in his septum, eyebrows and ears seem dull and annoyed. On the opposite page, Josh has perfectly captured the middle-aged couple’s studious, gentle frowns.

I touch a corner, one without ink, oh so lightly. To prove to myself that this moment is real. My voice turns reverent. “These are amazing. Is the whole thing filled with portraits like this?”

Josh closes the sketchbook and slides it back towards himself. Its pages are thick with use. On the cover is a blue sticker shaped like America. A single word has been handwritten across it: WELCOME. I don’t know what that means, but I like it.

“Thanks.” He gives me another smile. “It’s for whatever, but yeah. Mainly portraits.”

“And you’re allowed to do that?”

His brow creases. “Do what?”

“To draw them?” he asks. I nod, and he continues. “Nah. I’m not using these for anything special. This isn’t even my good sketchbook. See? I can’t remove the pages.”

Eggs by Jerry Spinelli
The Birth of Love by Joanna Kavenna
Zombies vs The Living Dead (An Evacuation Story #1) by Tayell, Frank
The Missing Mummy by Ron Roy
The Chase II by Xyla Turner
The Hunted by Kristy Berridge
Backstreet Child by Harry Bowling
The Tequila Worm by Viola Canales
Sweet Temptation by Angel Steel
PENNY by Rishona Hall