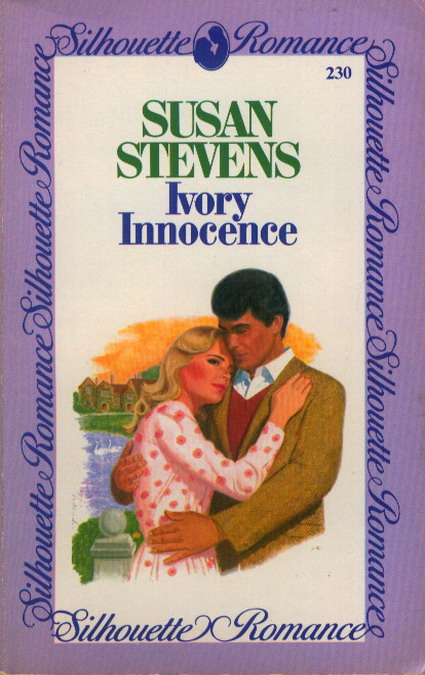 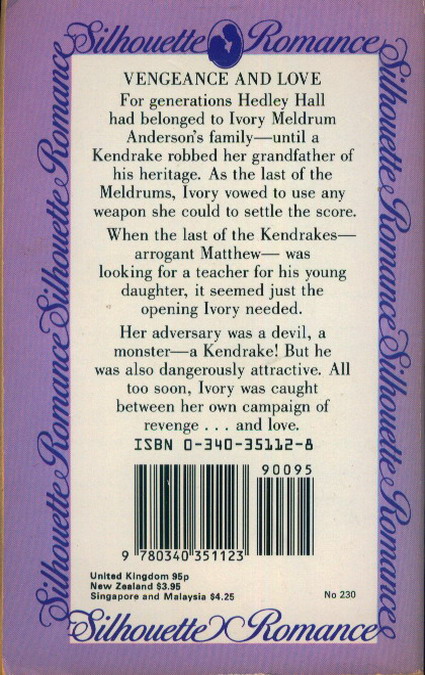 "Three weeks of work without a break," Ivory cried.

Matthew glanced over her with an arrogant intimacy that made her flush.

"A prisoner? Locked up? Totally in my power?" His cool blue gaze swept slowly across her face. "No, not yet, Ivory."

She started to move away but his hand on her arm prevented her. "You wouldn't dare!"

The devil gleamed at her from his blue eyes as he bent and touched his lips to hers.

Everything inside of her protested, but Ivory's body refused to resist. "Wouldn't I dare, Ivory? Wouldn't I?"

SUSAN STEVENS has been writing since she was eight years old; and it is still her favourite occupation. She lives in Northern England with her husband who, she says, is her greatest fan. She loves to travel and hopes to visit the United States soon!

I'd like to take this opportunity to thank all of you who have written in with your comments on Silhouette Romances.

We are always delighted to receive your letters, telling us what you like best about Silhouette, our authors, or indeed, anything else you want to tell us. This is a tremendous help to us as we strive to publish the best contemporary romances possible.

All the romances from Silhouette Books are for you, so enjoy this book and the many stories to come. I hope you will continue to share your thoughts with us and invite you to write to me at this address:

"Your mother was a Meldrum, Ivory. That makes you a Meldrum, too. Never forget it."

The words her grandmother had repeated so often rang like a litany in her head as she left the main road and turned off among the rolling hills of South Lincolnshire. It was a place of sturdy farmhouses, of fields hugging the contours of the undulating land in swathes of tender green and bright yellow, with yarrow making drifts of white under the roadside hedges.

Driving up a familiar rise, Ivory braked as she came in sight of the village of Hedley Magna. It lay in a hollow, its houses built mainly of pale limestone interspersed with newer brick dwellings. The red of the pantiled roofs, mellowed over the years, contrasted softly with the greens of the late spring landscape.

Just beyond the brow of the hill, a line of chestnut trees with their erect candle blossoms sheltered a sign that read TOP FARM. Ivory turned in beneath the trees, driving along a rutted lane between meadows where cows grazed, past barns and outbuildings to a yard where the farmhouses stood to one side.

As Ivory stopped the car, a fair-haired young man wearing muddied overalls and Wellington boots emerged from the old stable block and came clumping over, greeting her with a smile.

Tired from driving and tense because of what she had come to do, she bit back a sarcastic retort and instead forced a smile.

"Hello, Rob. Yes, I made it. It took me longer than I expected, though. Would you mind taking my overnight case for me? I really mustn't stop or I'll be late for my appointment. I'm due at the Hall at three o'clock."

She took her small case from the backseat and handed it to Rob Garth, nervously touching her silver-gold hair, arranged in a chignon.

He considered her carefully, his hazel eyes warm with affection as he took in the neat gray suit with its flared skirt lying smoothly across slim hips, and the little jacket that fitted closely to her curves. Beneath it she wore a navy blouse, with a floppy bow tied at her throat.

Ivory sighed. "No, really, Rob. Do I look efficient and capable? Like a teacher?"

"I suppose so. But when I was at school I never had a teacher who looked like you. I might have concentrated harder if I had."

In no mood for flattery, Ivory opened the car door and slid back behind the wheel. "I want Matthew Kendrake to employ me, not seduce me," she said tartly; then, seeing the hurt in his eyes, "I'm sorry, Rob. I'm all on edge. Talk to you later."

Aware that he stood watching her with the air of a puppy that had been slapped for something he hadn't done, she turned the car around, and drove back up the lane to the road. The chestnuts hid her from the farmhouse as she let the car ease down the lane toward the village, and she pulled up in a shady spot where trees hung over a wrought-iron fence and small gate. Beyond it she could see the golden walls of Hedley Hall. But her attention was on the building opposite— the cottage that had once been her home.

Her gray eyes grew bleak as she stared at the scaffolding that surrounded the place. New windows had been cut, but the blackened marks of fire remained smudged across the light stone and the roof was a maze of joists where once there had been thatch. The weeds grew tall in the garden her grandparents had tended so lovingly.

After a year haunted by nightmares of fire, the memories still brought pain that choked her throat with tears. She silently renewed her vow to find out the truth and repay the Kendrakes for what they had done.

She put the car into gear again and drove on down the curving lane to where, at a junction with another road, she came face to face with the church. Here on the corner she came to the main driveway of Hedley Hall. The big house hid behind woods of beech, lime and field maple, and among the thick undergrowth ground ivy crept round patches of bluebells and forget-me-nots.

The gravel drive curved around through the trees until the house came into sight behind sweeps of lawn. It was built of Lincolnshire limestone that glowed golden in the sunlight, and its formal Georgian lines, with tall windows and balustraded roof, were softened by drapes of clematis leaves.

Pulling up on the broad graveled area that fronted the house, Ivory left the car and smoothed back her hair. The style left the lines of her face uncluttered: wide-spaced gray eyes fringed with dark lashes, high cheekbones and generous mouth.

At the moment that mouth was set in stubborn lines, and her eyes glinted like steel as she surveyed the waiting house. For generations the Hall had belonged to the Meldrum family—her family—until a Kendrake had robbed her grandfather of his heritage. As the last of the Meldrums, she was embarking on a quest to avenge the wrong that had been done long before she was born.

With her navy handbag swinging from her shoulder, she crunched across the gravel to the wide stone porch, where a wooden tub of flowers stood beside a doormat. She pressed the bell and heard faint chimes sound somewhere in the depths of the house.

After a few moments the door was opened by a middle-aged woman in a dark dress. She regarded Ivory inquiringly.

"My name is Andersen," Ivory said. "I have an appointment with Mr. Kendrake."

"Oh, yes, Miss Andersen." The woman smiled, stepping back to open the door wider. "He's expecting you. Please come in."

Ivory walked into the hall, glancing around at its spacious proportions. It was furnished with quiet good taste; framed watercolors graced the walls, and a line of oval miniatures followed the curve of the stairs. Somehow, it wasn't quite what Ivory had been expecting.

"I'm Mrs. Barnes, the housekeeper," the woman said with a smile, "If you'll come this way, I believe Mr. Kendrake's waiting for you. He'll be pleased you're on time. He doesn't like to be kept waiting."

She led the way down the hall and threw open a door to announce, "Miss Andersen is here, sir."

"Show her in," a deep male voice replied, and Mrs. Barnes turned to give Ivory another encouraging smile.

Raiders of Gor by John Norman
The Maiden's Hand by Susan Wiggs
First Watch: A Watcher Bay Adventure by Auburn Seal
Choose the Sky: A Medieval Romance (Swordcross Knights Book 2) by Elizabeth Cole
No Rules by R. A. Spratt
Priest (A Standalone Bad Boy Romance Love Story) by Claire Adams, Alycia Taylor
B00C4I7LJE EBOK by Skone-Palmer, Robin
Long Shot by Mike Lupica
Taboo by Casey Hill
The Alpha and the Omega: An absurd philosophical tale about God, the end of the world, and what's on the other planets by H. M. Charley Ada