Read Jack In A Box Online

Jack In A Box 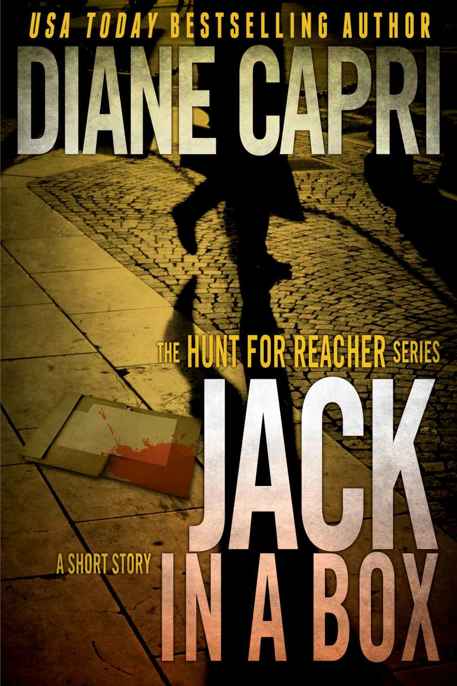 “Full of thrills and tension, but smart and human, too. Kim Otto is a great, great character. I love her.”

“Swift pacing and ongoing suspense are always present...[L]ikable protagonist who uses her political connections for a good cause...Readers should eagerly anticipate the next [book].”

“Expertise shines on every page.”

Jack in a Box
(short story) 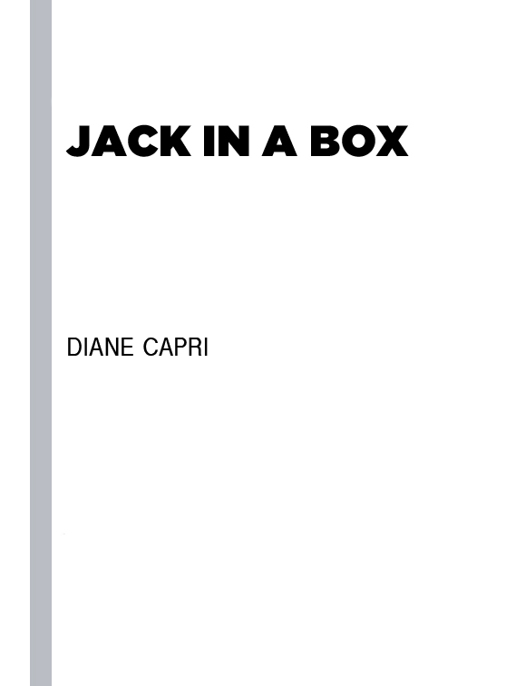 Jack in a Box
is a work of fiction. Names, characters, places, and incidents either are the product of the author’s imagination or are used fictitiously, and any resemblance to actual persons, living or dead, business establishments, events, or locales is entirely coincidental.

This eBook is licensed for your personal enjoyment only. This eBook may not be re-sold or given away to other people. If you would like to share this book with another person, please purchase an additional copy for each person you share it with. If you’re reading this book and did not purchase it, or it was not purchased for your use only, then please return it and purchase your own copy. Thank you for respecting the hard work of this author.

The publisher and author do not have any control over and do not assume any responsibility for author or third-party websites or their content.

No part of this book may be reproduced, scanned, or distributed in any printed or electronic form without express written permission from the publisher. The scanning, uploading, and distribution of this book via the Internet or any other means without the permission of the publisher is illegal and punishable by law. Please do not participate in or encourage piracy of copyrighted materials in violation of the author’s rights. Purchase only authorized editions.

FBI SPECIAL AGENT KIM OTTO’S slowly descending eyelids abraded like forty-grit sandpaper along her corneas and rested briefly before ascending in gouging retraction. How long had she been sitting here? The FBI headquarters building was quiet here in the basement. Activity was limited to higher floors where essential matters were handled.

“What are you missing?” she asked the empty room as if she expected the answer to be revealed, when she expected nothing of the sort. If she was going to find anything at all, she’d have found it long before now. But she couldn’t give up, so she thought it through again.

She’d begun by searching for general information. Finding none, she’d narrowed her search to the fingerprints. Fingerprints never changed, never disappeared, never failed to identify. Every law enforcement officer knew a fingerprint was worth a thousand eyewitness reports and often better even than DNA.

But like DNA, fingerprints were only useful when compared to known identities. Law enforcement files around the globe were filled with unidentified prints and DNA. The first order of business was to find proof of positive identity. She’d thought that would be easy. Wrong.

Jack Reacher must have been fingerprinted by the Army, like every other soldier. Maybe a single set of prints made all those years ago could have been misplaced in the days before computers ruled the world. Or maybe accidentally destroyed somehow.

Relevant military files were integrated with FBI and other agency files now, Kim knew. But Reacher’s army discharge was long before 9/11. Back in those days, government agencies didn’t share information in the way they did now. Some old files involving military personnel instead of criminal defendants were not searchable in the various FBI databases Kim had the necessary security clearance to examine without raising the alarms she didn’t want to trigger.

Her plan was to check the military files last because they were the oldest. Her accounting background led her to prioritize the most recent information first, or first in, last out.

Reacher wasn’t an army grunt who’d been drafted, served a quick term, and mustered out. He’d spent thirteen years in service to his country, including his last stint with the military police. As an MP his reference fingerprints would have been routinely used to exclude his prints from those left by witnesses and suspects at crime scenes.

Kim should have found at least a few Reacher exemplars in the FBI databases. But she hadn’t.

Nor had she really expected to find anything relevant, although she hadn’t abandoned all hope. But her realistic plan was only to confirm her assumption that nothing concerning Jack Reacher existed in FBI files. After that, she and Gaspar could move on to conducting additional interviews with victims, witnesses, reporting parties, and informants. Always assuming they could find any of the above.

She stood, eyes closed to avoid the gouging, stretched like a cat, then a downward dog, working the kinks out of her stiff muscles. She heard nothing but her own breathing. She stretched her neck and shoulders again before making her way to the elevator in search of java, nectar of the gods.

Kim pressed the elevator button and completed another round of stretches while she waited. Lights above the door flashed up and down and up and down, stopping at floors high above. The basement was low priority, below stops where others were consumed by important activity, Kim concluded. The only coffee at this hour would be inside the busiest sectors of the building, places she didn’t want to be seen. Yet. . . She sighed, shrugged, headed for the stairs.

When she exited on the ground floor her personal cell phone vibrated. She checked the caller ID before answering.

FBI SPECIAL AGENT CARLOS GASPAR had planned to leave early even before the classified envelope arrived containing nothing but a copy of Major Jack (none) Reacher’s formal headshot; on the back, a time and place for a meeting.

Had Reacher planned the meet? Or was it someone else who wanted Otto and Gaspar present? Either way, the big question was why?

Nothing traceable about the envelope or its contents. He chased down the delivery service but got no further data. The headshot was easily obtainable by any number of people. Hell, he’d been supplied one just like it when he initially received the Reacher file assignment.

The time and place for the meet was a bit out of the ordinary, but not alarming. The National Gallery of Art, East Building, on Pennsylvania Avenue. Ten o’clock tonight. It would be dark but not deserted. The building was one of those modern designs full of angles and shadows suitable for clandestine activities. But not a bad neighborhood, unless you hated politicians, and the entire town was infested with those.

He’d tried to call Otto, but her plane was already in the air and flying straight into an early winter storm. She hated flying under the best conditions; she’d be too wired by the storm and her errand to make any sense, even if he’d reached her. They’d talk tonight. In DC.

Fifty minutes before he planned to depart, his bag was packed and stowed in the Crown Vic’s trunk. He’d dressed in his Banana Republic suit. Gaspar popped another Tylenol, rested on the chaise lounge, and watched his youngest daughter from behind mirrored sunglasses that reflected little of Miami’s winter sunlight and none of its heat.

Today was Angela’s fifth birthday, meaning five giggling girls had invaded his home overnight. That was one of his wife’s rules. No sleepovers until age five, then five girls for her fifth birthday, six for the next, and so on. His eldest would be thirteen in a few months; the idea raised gooseflesh along his arms and not only because thirteen teenagers in his small house would be ear splitting.

Thirteen was a dangerous age. Rebellion. Independence. Sex. He clearly recalled himself and his buddies at thirteen. The prospect of launching his firstborn daughter into that realm terrified him, but he acted as if it didn’t. He shrugged. No way to stop the clock. It is what it is.

Gaspar felt his eyelids slide closed and shoved them up again. Yes, he was tired, but that was nothing new. Exhaustion had been a constant companion since his injury. He rarely slept more than an hour before throbbing pain in his right side awakened him. He’d become a quick nap expert to capture missing sleep, but he felt his senses dulled, his reaction times slowed. The healed scrape where a bullet seared his abdomen felt like a burning rash reminding him to stay alert, how grateful he was to have the fearless Otto as his partner, a solid assignment, and how damn lucky he was to be alive to see his daughters’ birthdays.

Cacophonous noise drowned such thinking. Five girls cavorting in the back yard pool, squeals, shouts, splashes. Surely decibel level ordinances in Miami’s residential neighborhoods were violated. He’d tried asking them to quiet down, and they did, but joy erupted again louder than ever after maybe five subdued seconds. Was impulse control equal to age? Would the quiet seconds lengthen to six and then seven? Would it be five more years before he might enjoy ten seconds of silence at home from his youngest girl?

He’d survived many life-threatening situations, but fathering frightened him more than anything. Four daughters already and his wife pregnant with a boy. Job one was keeping his family safe.

Before his injury he never considered such things, never worried that he’d fail, never gnawed the consequences. Maria had handled the girls effortlessly and he’d swooped in to count noses and grab hugs before bedtime. Confidence had oozed from Gaspar’s pores back then. Four kids hadn’t seemed overwhelming. He hadn’t felt boxed in so much as engulfed by creatures he loved more than anything.

Not anymore. Adding a fifth child at this point terrified him. A boy. Boys needed a solid role model, a strong father like his own had been, but Gaspar’s body refused to perform as required and he could barely keep his head in the game.

How would Maria manage the girls and a new baby while he worked the Reacher file, traveled all over the country, only coming home for brief stints, not knowing how long this assignment would go on, worried that the work would end too soon?

He shrugged again without realizing he’d moved this time. It was what it was.

As Otto said, only one choice. He’d do what he had to do.

He had to work.

They needed the money.

Palace of Spies by Sarah Zettel
The Lion of Senet by Jennifer Fallon
Romance on Mountain View Road by Sheila Roberts
Wolf Shadow by Madeline Baker
Thistle and Twigg by Mary Saums
Ship of Destiny by Robin Hobb
The Murders of Richard III by Elizabeth Peters
Clio and Cy: The Apocalypse by Lee, Christopher
Click (A Night Fire Novel Book 2) by Watkins, TM
none