Read Jack in the Box Online

Jack in the Box 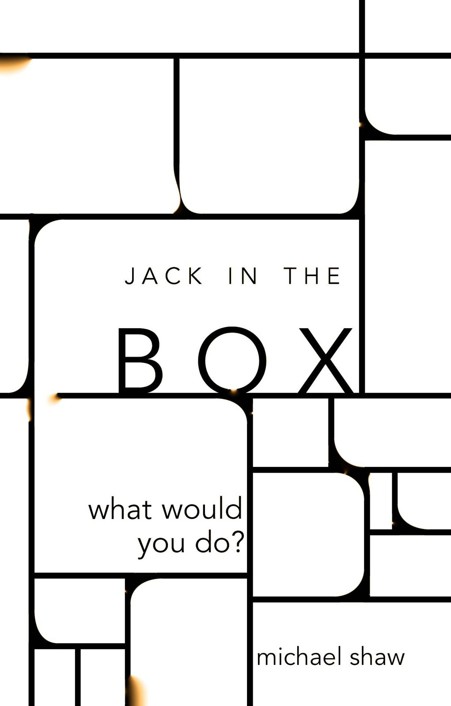 If you’re reading this, to use a cliché, you are making a dream come true. In this case, though, the cliché must be used, because it’s true. I am so excited to see this book being read by other people, and I am excited that you yourself are reading it.

I’ve always been fascinated with story, more specifically, with creating story. I have memories of myself even as far back as first grade making small stories, sharing them with my friends, and even trying to write a book or two before I finally wrote the book you now hold in your hands. Originally I made little fan-fiction comics about the super hero or movie character I was into, and later I started to make comics with stories of my own. Back then I perceived that maybe I would become a talented artist out of it, but I realize now that the drawing wasn’t what impassioned me the most. It was the story. I love stories, and I love telling stories. I hope you love reading this one as much as I loved writing it.

So once again I’ll say it: you’re making a dream come true. This is the first book I’ve ever written, and I am blessed to have it completed and published.

Maybe this book will challenge you. Maybe it will convict you. If anything, it will make you think. So get ready to grind your gears, and enter the Box.

It was the first thing that came into my mind. I didn’t really understand what it meant. But I assumed it must’ve been what I was seeing, which now I know was in fact, black. I moved my eyes all around. Saw nothing except nothing. My emotions were going crazy, but with no words behind them. My mind felt like a blank slate, and I didn’t know what to do. Then I remembered those things that keep me from being able to see. Eyelids. I opened them, and my surroundings began to come into focus. This was the first time I remember waking up, but apparently it wasn’t.

“Good morning!” a voice said in front of me.

Morning. What is that
?
I struggled to remember its meaning.

Beginning of the day. Before noon.

“Well, technically not morning. In fact I just had lunch; it's a little bit after noon,” the man patted his stomach. "But morning as far as you're concerned, sleepy head! I bet you’re hungry, but lunchtime’s already over, so you’ll have to wait until dinner.”

I looked back at the man in front of me. He had a sincere smile on his face, and a clipboard in his hand.

Paper. Comes from trees. Made for writing. Wait. What is a tree?

Common knowledge came rushing back into my brain.

The room has doors. One door at each wall.

It’s that thing I’m supposed to be called, isn’t it?

I sat there. Tried so hard to get the answer. Tried to remember who I was.

The man in front of me stopped talking when he saw the confused look on my face. His demeanor slightly changed. He was no longer just happy and careless; now he had the look of a caring father. Almost as if he had been in my shoes.

I looked down at my feet to see if I was even wearing shoes. Yes.

“What is your name?” he asked me with that concerned look on his face. It was as if he knew that I was asking myself the same thing.

“I can answer that one for you, you’re twenty-nine. Your birthday was two minutes ago. Happy birthday!” He changed back to his happy self again.

Didn’t I wake up two minutes ago?

“So you don’t know who you are. Everything’s going correctly so far.” The man looked at the next page of his clip board.

For some reason I had to ask him, “What’s your name?”

“Sorry.
”
An expression of apology.

He disregarded what had just happened.  “Where were you born?”

I gave the first answer that came to mind. “Here?”

“Well, you’re not entirely incorrect.” He scanned the page on his clipboard. “Just one more question to test your memory. What year is it?”

He lifted his head and looked straight at me. “I was hoping you would know. That question’s not on the clipboard. I don’t know either.”

“Well, now that we’ve gotten those out of the way,” the man ripped the pages off the clipboard and crumpled them up. He tossed them into something in the corner. A trash bin. “Let’s get onto your intellect.”

The man looked at his clipboard with that happy expression on his face again.

“Four.” I answered without thinking. Okay. So what?

“How many letters are in the alphabet?”

I did the task effortlessly.

“This is too easy for you.” His eyes raced down the page looking for a harder question. “Okay! This is a good one.” He took the page off of the clip board and turned it over. He proceeded to copy down a short algebraic equation onto the page. Then he held the pencil out to me.

The solution was already going through my head before I even took the pencil. The work for it was done in five seconds, but the answer was taking a while to write down. So many digits. I kept writing; my hand flew across the page.

He grasped my wrist to stop me. “It’s pi . . . You’d be writing that answer down for a while.” He picked the paper back up and looked at it once again. “Let’s do some more.”

Many questions followed. One, two, three hours passed. We went through math, grammar, and science. I answered them all correctly. So, If I understood what was going on here, I knew everything, but remembered nothing.

“Well, aren’t you the smart one?” said the man in his happy mood. “I’m sure you’re glad that’s over. You must be really hungry by now."

"But it’s not dinner time yet. And unfortunately, I won’t be able to have dinner with you tonight.”

He put the clipboard down on the floor next to his feet. “Oh, you'll find out.”

“Well, apparently you’re. . ." he eyeballed the clipboard, "J-100. But it seems so cliché to name people with numbers and letters, doesn’t it?”

I stared at him.

“Yes, generic name, but you look like a Jack to me. Generic Jack. How about that? You know what that is? It’s-”

“Of course you know what it is. Anyway, Jack, let’s get down to business."  He reached underneath my bed and took out a briefcase.

He ignored my question. His happy face was gone again. He ran his hand across the top of the case. Paused.

He put his hands on the locks, but stopped. His hands shook slightly. He seemed hesitant to open it. But he shook his head and continued. “Basically, Jack, there are two parts to this thing.” He opened the briefcase. I still couldn’t see inside it though. “All you have to worry about right now, is part one.” He took something out of the briefcase; it was dark and shaped like an L. A gun. He held it out to me. “Now, I’m not allowed to kill you,” he said. “But you’re allowed to kill me.”

I took the gun. It was cold, but the feeling was familiar. I felt as though I'd held a gun before. I felt comfortable with it, which led to me feeling uncomfortable. All that was missing was the magazine. I looked up at him. “Why would I kill you?”

“Well
,I
don’t want you to,” he said with a fake laugh. “But you’re allowed to.” He took something else out of the briefcase and gave it to me. It was the magazine. He pointed at it and said, "Five bullets, Jack. That's what you get. That'
s
al
l
you get."

He looked up at me. “You don’t get out of this place unless you can catch me.”

Why he said this so seriously, I had no idea. This sounded like some childish game
.
Ta
g
was the word. “But why would I want to leave?”

Yet again he neglected to answer me. “I’ll let you keep these, too.” He gave me a small notebook and a pen.

“What are these for?”

“You’ll figure that out.”

“So, when does this start?”

“Hang on.” He walked over to one wall of the room. He pointed to the door. “Listen carefully. Like I said, the test is to catch me. You may not attempt this during meal times. Each door leads to a different room. You may not mark a door, you may not break a door, and you must close a door after opening it.”

I made sure I could remember all the rules. Then I considered the rules themselves. Many about things I couldn't do to doors. “Why?”

“You really like to ask questions for someone so smart.”

“You’re not answering them.”

“Dinner is served here in your room. You must be back in time or you will not eat. The next chance you will get at eating is tomorrow for breakfast at 8 am.

“How will I know what time it is?”

This shouldn’t be hard
,
I thought. I looked at him confidently. “Let’s do this.”