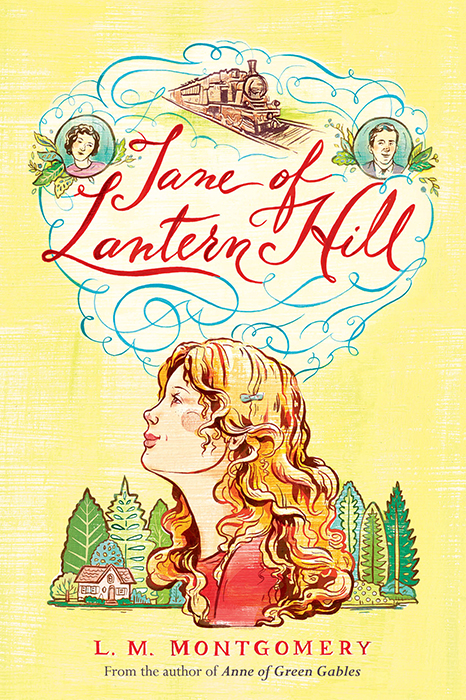 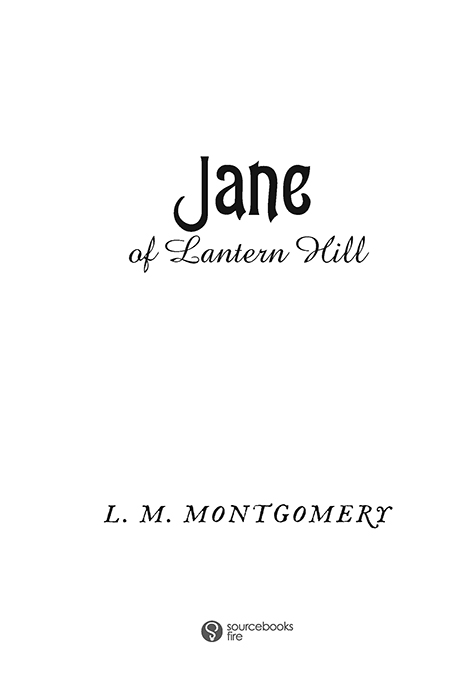 Cover design by The Book Designers

To the memory of “LUCKY,” the charming, affectionate comrade of fourteen years.

Gay Street, so Jane always thought, did not live up to its name. It was, she felt certain, the most melancholy street in Torontoâ¦though, to be sure, she had not seen a great many of the Toronto streets in her circumscribed comings and goings of eleven years.

Gay Street should be a
gay
street, thought Jane, with gay, friendly houses, set amid flowers, that cried out, “How do you do?” to you as you passed them, with trees that waved hands at you and windows that winked at you in the twilights. Instead of that, Gay Street was dark and dingy, lined with forbidding, old-fashioned brick houses, grimy with age, whose tall, shuttered, blinded windows could never have thought of winking at anybody. The trees that lined Gay Street were so old and huge and stately that it was difficult to think of them as trees at all, any more than those forlorn little things in the green pails by the doors of the filling station on the opposite corner. Grandmother had been furious when the old Adams house on that corner had been torn down and the new white-and-red filling station built in its place. She would never let Frank get gas there. But at that, Jane thought, it was the only gay place on the street.

Jane lived at 60 Gay. It was a huge, castellated structure of brick, with a pillared entrance porch, high, arched Georgian windows, and towers and turrets wherever a tower or turret could be wedged in. It was surrounded by a high iron fence with wrought-iron gatesâ¦those gates had been famous in the Toronto of an earlier dayâ¦that were always closed and locked by Frank at night, thus giving Jane a very nasty feeling that she was a prisoner being locked in.

There was more space around 60 Gay than around most of the houses on the street. It had quite a bit of lawn in front, though the grass never grew well because of the row of old trees just inside the fenceâ¦and quite a respectable space between the side of the house and Bloor Street; but it was not nearly wide enough to dim the unceasing clatter and clang of Bloor, which was especially noisy and busy where Gay Street joined it. People wondered why old Mrs. Robert Kennedy continued to live there when she had oodles of money and could buy one of those lovely new houses in Forest Hill or in the Kingsway. The taxes on a lot as big as 60 Gay must be ruinous, and the house was hopelessly out of date. Mrs. Kennedy merely smiled contemptuously when things like this were said to her, even by her son, William Anderson, the only one of her first family whom she respected, because he had been successful in business and was rich in his own right. She had never loved him, but he had compelled her to respect him.

Mrs. Kennedy was perfectly satisfied with 60 Gay. She had come there as the bride of Robert Kennedy when Gay Street was the last word in streets and 60 Gay, built by Robert's father, one of the finest “mansions” in Toronto. It had never ceased to be so in her eyes. She had lived there for forty-five years and she would live there the rest of her life. Those who did not like it need not stay there. This, with a satirically amused glance at Jane, who had never
said
she didn't like Gay Street. But grandmother, as Jane had long ago discovered, had an uncanny knack of reading your mind.

Once, when Jane had been sitting in the Cadillac, one dark, dingy morning in a snowy world, waiting for Frank to take her to St. Agatha's, as he did every day, she had heard two women, who were standing on the street-corner, talking about it.

“Did you ever see such a
dead
house?” said the younger. “It looks as if it had been dead for years.”

“That house died thirty years ago, when Robert Kennedy died,” said the older woman. “Before that it was a lively place. Nobody in Toronto entertained more. Robert Kennedy liked social life. He was a very handsome, friendly man. People could never understand how he came to marry Mrs. James Andersonâ¦a widow with three children. She was Victoria Moore to begin with, you know, old Colonel Moore's daughterâ¦a very aristocratic family. But she was pretty as a picture then and was she crazy about him! My dear, she worshipped him. People said she was never willing to let him out of her sight for a moment. And they said she hadn't cared for her first husband at all. Robert Kennedy died when they had been married about fifteen yearsâ¦died just after his first baby was born, I've heard.”

“Does she live all alone in that castle?”

“Oh, no. Her two daughters live with her. One of them is a widow or somethingâ¦and there's a granddaughter, I believe. They say old Mrs. Kennedy is a terrible tyrant, but the younger daughterâ¦the widowâ¦is gay enough and goes to everything you see reported in
Saturday
Evening.
Very prettyâ¦and can she dress! She was the Kennedy one and took after her father. She must hate having all her fine friends coming to Gay Street. It's worse than deadâ¦it's decayed. But I can remember when Gay Street was one of the most fashionable residential streets in town. Look at it now.”

“Hardly even that. Why, 58 Gay is a boarding-house. But old Mrs. Kennedy keeps 60 up very well, though the paint is beginning to peel off the balconies, you notice.”

“Well, I'm glad I don't live on Gay Street,” giggled the other, as they ran to catch the car.

“You may well be,” thought Jane. Though, if she had been put to it, she could hardly have told you where she would have liked to live if not at 60 Gay. Most of the streets through which she drove to St. Agatha's were mean and uninviting, for St. Agatha's, that very expensive and exclusive private school to which grandmother sent Jane, now found itself in an unfashionable and outgrown locality also. But St. Agatha's didn't mind thatâ¦St. Agatha's would have been St. Agatha's, you must understand, in the desert of Sahara.

Uncle William Anderson's house in Forest Hill was very handsome, with landscaped lawns and rock gardens, but she wouldn't like to live there. One was almost terrified to walk over the lawn lest one do something to Uncle William's cherished velvet. You had to keep to the flat stepping-stones path. And Jane wanted to
run.
You couldn't run at St. Agatha's either, except when you were playing games. And Jane was not very good at games. She always felt awkward in them. At eleven she was as tall as most girls of thirteen. She towered above the girls of her class. They did not like it and it made Jane feel that she fitted in nowhere.

As for running at 60 Gayâ¦
had
anybody ever run at 60 Gay? Jane felt as if mother must haveâ¦mother stepped so lightly and gaily yet that you thought her feet had wings. But once, when Jane had dared to run from the front door to the back door, straight through the long house that was almost half the length of the city block, singing at the top of her voice, grandmother, who she had thought was out, had emerged from the breakfast-room and looked at her with the smile on her dead-white face that Jane hated.

“What,” she said in the silky voice that Jane hated still more, “is responsible for this outburst, Victoria?”

“I was running just for the fun of it,” explained Jane. It seemed so very simple. But grandmother had just smiled and said, as only grandmother could say things,

“I wouldn't do it again if I were you, Victoria.”

Jane never did it again. That was the effect grandmother had on you, though she was so tiny and wrinkledâ¦so tiny that lanky, long-legged Jane was almost as tall as she was.

Jane hated to be called Victoria. Yet everybody called her that, except mother, who called her Jane Victoria. Jane knew somehow that grandmother resented thatâ¦knew that for some reason unknown to her, grandmother hated the name of Jane. Jane liked itâ¦always had liked itâ¦always thought of herself as Jane. She understood that she had been named Victoria after grandmother, but she did not know where the Jane had come from. There were no Janes in the Kennedys or Andersons. In her eleventh year she had begun to suspect that it might have come from the Stuart side. And Jane was sorry for that, because she did not want to think she owed her favorite name to her father. Jane hated her father in so far as hatred could find place in a little heart that was not made for hating anybody, even grandmother. There were times Jane was afraid she did hate grandmother, which was dreadful, because grandmother was feeding and clothing and educating her. Jane knew she ought to love grandmother, but it seemed a very hard thing to do. Apparently mother found it easy; but, then, grandmother loved mother, which made a difference. Loved her as she loved nobody else in the world. And grandmother did not love Jane. Jane had always known that. And Jane felt, if she did not yet know, that grandmother did not like mother loving her so much.

“You fuss entirely too much about her,” grandmother had once said contemptuously, when mother was worried about Jane's sore throat.

And then grandmother's old white face had flushed.

“Oh, mother, you know I didn't mean
that
,” mother had said piteously, fluttering her hands in a way she had which always made Jane think of two little white butterflies. “I meantâ¦I meantâ¦she's my only childâ¦”

“And you love that childâ¦
his
childâ¦better than you love me!”

“Ingrate!” said grandmother. It was only one word, but what venom she could put into a word. Then she had gone out of the room, still with that flush on her face and her pale blue eyes smoldering under her frosty hair.