Read Jennifer Johnson Is Sick of Being Married Online

Jennifer Johnson Is Sick of Being Married 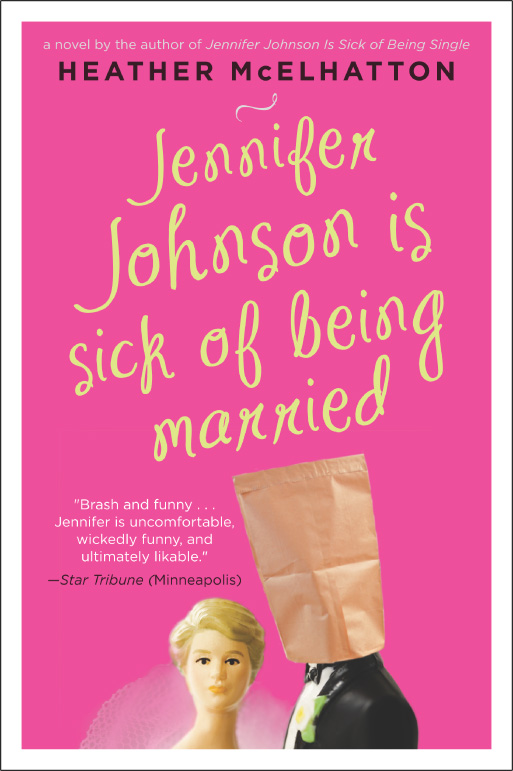 Jennifer Johnson Is Sick
of Being Married

and all who sailed with him.

First mate of the schooner
Appledore

There are no guarantees in this world.

I went on my honeymoon with a few expectations. Kill me. After decades of consuming popular honeymoon images featuring white-sand beaches, tranquil breezes, and newlyweds barely able to contain their matrimonial lust for each other, I pretty much thought that was what happened. I'd hung on to the possibility that a few moments in life
might be
perfect, really
should be
perfect if God loved us even the smallest, tiniest, teensiest bit. He doesn't. He's a bored trickster with a penchant for ironic calamity, just dreaming up new ways to ruin us.

Our honeymoon
did not
include any of the aforementioned fun qualities, but
did
include illness, injury, and the unrelenting soundtrack of severe gastric distress and loud calypso music being performed live in the lobby at all hours of the day and night. Sharp, tinny, percussive beats that tapped like a wasp inside your skull. An inescapable rhythm audible anywhere you went, including the hotel room and the marble floor of our bathroom with several towels wrapped around your head. They say you attract the things that happen to you. Maybe it's true, and if it is, I must search out the specific mistakes that allowed my honeymoon from hell to happen. Perhaps uncovering the choices that led our prepaid, nonrefundable little piece of heaven to transmogrify into a baffling personal hell will prevent it from happening again.

So here we go.

Mistake #1:
Letting Brad's parents plan the honeymoon
. Brad's parents are generous, rich, religious, and controlling. They paid for our wedding
,
which is why we had “Mary and Joseph” (the most popular couple in the Bible) as the theme at our reception and little hay mangers for table centerpieces, each one with a clothespin Baby Jesus.

They also paid for our honeymoon, which is why it was at a Caribbean Christian resort called In His Palms on Saint John island. Brad was happy about it. He'd just gotten his dive certificate .Â .Â . well, he'd almost gotten it. He hadn't finished all the classes, but his stupid dive-instructor buddy gave it to him as a wedding present, just handed it over even though Brad hadn't learned all the hand signals. I was livid. What if something went wrong down there and Brad
died
because he didn't know the hand signal for some
critical
message, like:

“HAS ANYONE SEEN THAT BALD GUY WE WERE DIVING WITH? WE GOT A LITTLE TANGLED UP EARLIER AND I JUST REALIZED I'M STILL HOLDING HIS MASK. ”

“DOES ANYONE KNOW WHERE A SAND DOLLAR'S ANUS IS? THIS ONE EITHER SPAT AT ME OR POOPED STRAIGHT UP AT MY FACE AND I WANT TO KNOW WHICH.”

“HELLO, NEW FRIENDS! I NEED ASSISTANCE. I LOST MY ORIGINAL DIVE GROUP AFTER BECOMING FASCINATED BY A WEIRD-LOOKING TURTLE WHO LED ME, ALMOST KNOWINGLY, INTO A STRONG UNDERWATER CURRENT WHICH WHISKED ME AWAY AND SHOT ME OUT INTO A VAST KELP BED. THERE I BECAME LOST AND WAS FORCED TO OUTSMART A MEAN DOLPHIN AND A PARTICULARLY INTELLIGENT GROUP OF STARFISH, WHO MAY OR MAY NOT HAVE POOPED AT ME REPEATEDLY. MIGHT I JOIN YOUR GROUP? IF NOT, I WILL DEFINITELY DIE, NOT THAT IT'S DEFINITELY YOUR PROBLEM. THE LAWS AT SEA ARE TRICKY. MAY WE PLEASE HURRY, THOUGH? THE STARFISH WILL BE BACK. ”

Mistake #2: Going to the Caribbean in the summer.
We got married on June 10 and were in Saint John the next day. We stepped off the plane and into a solid wall of humid steamy air. It felt like walking around Africa with damp wool blankets wrapped around your body and heaped on your head. It was like being inside someone's mouth.

Mistake #3: Checking our luggage.
Bad weather on the first leg of our flight left us circling over Miami for two hours. Once we'd landed, we were forced to sit on the runway for another hour with babies crying and toilets overflowing. It was the kind of situation
20/20
does investigative stories about. By the time we got to a gate, we'd missed our connecting flight, as had most everybody else. I thought we should spend the night in Miami and fly out the next day. Brad, however, was determined to get us to Saint John
that night,
so as passengers lined up en masse at a ticket counter in the terminal, Brad used some new travel app he had on his phone and found us two seats on the last flight leaving Miami.

He booked two seats on a flight leaving for the neighboring island of Saint Thomas .Â .Â . which was leaving from a different terminal, of course, located somewhere on the other side of the globe, and was departing .Â .Â . in about forty-two microseconds.

I told him I didn't
want
to run. He said running would be good for me. Then he snatched up his bag and just took off without me. Suddenly I was standing there in the Miami International Airport by myself, watching Brad's quickly receding figure. In an instant, he was gone.

I blinked. Then I shouted,
“Brad! Wait!”
and fumbled to grab my stuff and bolt down the corridor after him. By the time I caught up with him at the connecting gate, I was furious. Teary-eyed, I refused to speak. Did Brad notice the distraught condition of his new bride?
He did not.
He was too busy congratulating himself on his victory of finding a new flight.

I managed to hold my fury down for about half the flight. Brad finally nudged my arm and said, “Hon, you okay?” I maintained my pensive stare and refused to look at him, while studying his every expression closely in his reflection in the dark window. Finally I lifted my chin defiantly and said, “I'm fine.” He of course assumed that meant I was actually fine .Â .Â . and he went to sleep.

Brad slept for the rest of the flight while I ground my molars into a fine powder. When we landed in Saint Thomas and learned that our luggage
had
in fact been left behind in Miami, I already had my reaction planned. I stared stoically off into space and said nothing. Brad proceeded to tell me everything was fine. They'd deliver our bags in a few days. He wasn't surprised they had lost our bags; they never could've gotten them on board our new flight. It took off in forty-two microseconds, after all. Remember?

I smiled at him and felt rage.

We took a ferry from Saint Thomas to the smaller island of Saint John. As we crossed over the water in a jolly wooden boat painted aquamarine and yellow, I silently and furiously inventoried all the contents of my luggage: carefully selected resort wear, tropical-hued makeup, complicated lingerie, industrial-strength foundation garmentsâitems all selected to make our honeymoon perfect. Items that were irreplaceable, absolutely essential, and officially no longer in play. Of course Brad thought it was no big deal. But I
needed
my luggage. He could stagger around wearing dirty boxers all week, but I couldn't. Men can stop shaving and wear rumpled clothes and people think they look rugged. Women do that and the only people who acknowledge them are stray dogs and lesbian folksingers.

When Brad asked why I was being so quiet for the third time, I uttered a small teeny-tiny concern that our honeymoon was now
ruined
. Brad thought I was being high-maintenance. He said they'd probably deliver our luggage in the morning, which they did not. In fact, they did not deliver it all week. In fact, we never saw our luggage again.

Mistake #4: Staying at an all-inclusive resort.
“All-inclusive resort” is another way of saying “friendly prison.” We arrived quite late at the In His Palms resort and found the harried concierge barely had time to give us our ID key cards and a hefty list of rules. You had to carry ID on you at all times. You were discouraged from leaving the resort grounds at any time. The Olympic-size pool, which was in the shape of a giant cross, closed every night at nine. The hot tub was for “married couples only,” not that anyone would take a Jacuzzi in that heat. There were also an ominous number of signs indicating forced jocularity and management-controlled merriment.

SMILE, YOU'RE IN PARADISE!

AND ON
24-
HOUR SURVEILLANCE CAMERA!

â¢
“IN HIS PALMS” TOWEL VEST

On the Rocks (Pub Fiction Book 2) by Jones, Gillian
Rainstone Fall by Peter Helton
A Toast to Starry Nights by Serra, Mandi Rei
Dreams of Water by Nada Awar Jarrar
Beneath the Book Tower: An Alex McKnight Short Story by Steve Hamilton
Jax (Broken Strings #1) by Cherry Shephard
Harald by David Friedman
These Are the Moments by Jenny Bravo
What Does the Moon Smell Like?: 151 Astounding Science Quizzes by Eva Everything
Sweet Agony (Sweet Series Book 1) by Jessie Lane