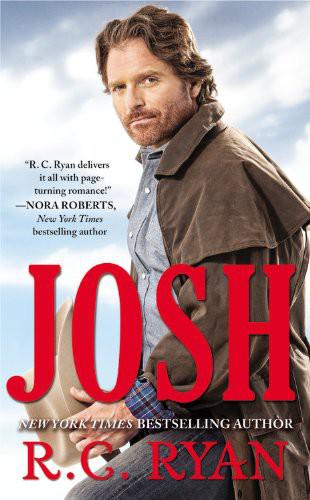 A Preview of
Jake

A Preview of
Quinn

For my beautiful daughter-in-law Patty Langan, whose tales of hiking the Grand Canyon enchant those of us who remain earthbound.

And for Tom, who makes my heart soar with the eagles.

Q
uinn.” Cole Conway, weary from a day of unrelenting ranch chores, paused in the mudroom to roll his plaid shirt to the elbows before scrubbing the grime from his hands. “Go fetch your brothers for supper.”

“Yes, sir.” As the oldest of Cole’s three sons, twelve-year-old Quinn was accustomed to running and fetching. He saw it as part of his responsibility to his younger brothers, especially since the mysterious disappearance of their mother, Seraphine.

He hurried to the barn, where he found seven-year-old Jake struggling to unsaddle his pony. While he helped, Quinn glanced around the cavernous building. “Where’s Josh?”

Quinn tossed the saddle over the side of the stall. “Better get inside. Pa’s ready to eat.”

When Jake hurried away, Quinn searched the barn, then made his way to the house, where he climbed the stairs to Josh’s bedroom.

His words were greeted by an ominous silence.

He started across the room toward the bathroom, when a scrap of notepaper in the middle of the bed caught his eye. He picked it up, scanned the words, then raced down the stairs and into the kitchen, where the rest of his family was gathered.

Old Ela, a member of the Arapaho nation, who had been with the family for nearly forty years, was cutting warm corn bread into squares. Phoebe Hogan, their newly hired housekeeper, was placing a platter of steaming roast beef, potatoes, and gravy in the center of the big trestle table. Cole and his father, Big Jim, stood on the far side of the room, before a roaring fire, sharing a beer and an animated conversation.

Cole looked up. “Quinn, I told you to fetch—”

Cole looked annoyed at this disruption of their routine. “What’s that supposed to mean?”

“Josh is gone, Pa.” Quinn held up the scrap of paper. “I found this note on his bed.”

Cole crossed the room in quick strides and snatched the paper from his son’s hand. After reading it, he passed it to Big Jim.

As he read the words, the older man’s eyes narrowed in concentration.

Cole turned away, muttering every rich, ripe oath he could think of. “When I get hold of that boy, he won’t be able to sit down for a—”

“That note says only that he’s gone to the mountain.” Cole glanced out the window at the Teton mountains towering in the distance. “He could be anywhere.”

“He can’t be too far ahead. He was mucking stalls less than an hour ago. You stay with your boys. I’ll find him.”

Before Cole could argue, Big Jim snagged a handful of corn bread and some slices of roast beef, which he stuffed into a plastic bag before striding out the door.

Along the way he grabbed his parka and one for Josh. Though the spring days were shirtsleeve weather, the nights, especially in the mountains, grew downright frigid after sundown.

Though he would have preferred the comfort of his truck, he saddled the big bay, knowing a vehicle would never make it where he was headed.

He pulled himself into the saddle and prayed that the light would last another couple of hours. Just until he could find one ten-year-old boy who’d taken himself off to the mountains to brood.

There weren’t many things left in this world that frightened Big Jim Conway. He’d been little more than a boy when he’d left Ireland to seek a life in this brave new land. He’d buried a wife and five sons, and had raised his only surviving son on his own. He’d faced the fierce whims of Wyoming weather, had turned extreme poverty into extreme wealth, taming this wilderness and making his ranch one of the finest in the country. And he’d done it all his way, by the sweat of his own brow. But the words scribbled on the scrap of paper by his middle grandson had him running scared.

I’ve gone off to the mountain.

It was so like Josh. The boy had always been the rebel of the family. The rule breaker. The independent thinker. The loner.

Big Jim had no idea why the Tetons, towering over their land, called to the boy. But they seemed to hold some sort of power over him. Whenever Josh could manage to slip away, his family knew they could find him somewhere in those hills, climbing. Always climbing. And each time he climbed, he went higher than the time before, without regard to the perils that lurked.

That was what had Big Jim so afraid. The boy had no fear. Not of the cougars that roamed the higher elevations, nor the storms that often blew in without warning, covering the mountains with wind and sleet and snow. A boy of ten wouldn’t give a thought to the fact that a single misstep could cause him to fall hundreds of feet into an abyss from which he might never be found, or leave him with crippling injuries that could cause him to be paralyzed for life.

All these fears played through Big Jim’s mind as he tethered his horse and began making his way along the steep trail, picking up an occasional thread or torn scrap of fabric that told him Josh had passed this way.

He looked up at the spectacular sunset, unable to appreciate its beauty. To Big Jim it meant only that dusk would soon be upon the land, making his task even more perilous.

He rounded a bend and spotted a lone figure sitting on a shelf of rock overlooking the land to the west.

The sight of his grandson left him weak with relief, and he took a moment to study the boy, his knees drawn up, arms around them, a pensive look on his face.

Big Jim took a deep, calming breath before striding closer and sitting down beside him.

“Your pa was worried, boyo.”

“It’s late. A lot can happen on this mountain.”

“I know how to take care of myself.”

“Yes, you do.” Big Jim leaned his back against a rock and turned his head to study the boy beside him. “Feel like talking?”

Josh shrugged. “Why bother? Nobody ever listens.”

The silence stretched out for so long, the old man began to think he’d made a mistake intruding on his grandson’s solitude.

Then, haltingly at first, the words began to tumble out of Josh’s mouth.

“Nobody ever talks about Mom.”

“It’s painful to talk about her. Ever since she went missing, your pa’s heart’s been broken. To cover it up, he turns to work, hoping if he pushes himself far enough and hard enough, it won’t hurt so much.”

“What about my heart? And Quinn’s? And Jake’s? How’re we supposed to keep on going without ever seeing her again?”

And there it was. Out in the open. All the nerves exposed and raw.

“I know your hearts are all broken, boyo. I know a thing or two about a broken heart. I learned a long time ago that it’s the price we have to pay for loving someone. When the time comes to let them go, we’re never ready. But it isn’t our choice. It’s up to the Almighty.”

“Are you saying God took my mom? ’Cause if that’s
so, why can’t we find her body? Or is God really some evil spirit, like Ela’s Arapaho spirits?”

Dangerous territory,
Big Jim thought. But he had no choice now but to plow ahead.

“As far as I know, Ela’s native spirits don’t do harm. As for the Almighty, I’ve always thought of him like a father. Tough, but fair. Loving, but always expecting us to do the right thing.”

“And if we don’t? What if we do something bad? Is that why Mom is gone?”

Big Jim lay a hand over his grandson’s. “Don’t ever think that. Bad things don’t happen to us as punishment for something we did or didn’t do. They just happen. They’re part of life. They happen to good people and bad. As for your mom, we don’t know if she’s dead or just missing. The fact that she disappeared without a trace left more questions than answers. I wish I could make you a promise, but I can’t. We may never know what happened. But we’re trying, boyo. Your pa’s hired a team of private investigators, and the police chief has the state police working on it. Chief Fletcher said that if they believe your mom crossed out of Wyoming, we can count on the FBI to lend a hand. But for now, we have to carry on with our lives. You know that’s what your mom would want for all of us. To get up every morning, put one foot in front of the other, and do the best we can.”

“But it’s like she was never in our lives now. Pa never talks about her.”

“He can’t, son. He’s tried, but every time he does, he breaks down. He doesn’t want you boys to see him cry. That’s why he takes himself out to the barns, or up to the hills, to work off his grief.” Big Jim cleared the lump from
his throat. “But she’ll always be in our lives. Your daddy only has to look at you and he sees her. In your eyes. In the shape of your face, the tilt of your head, the jut of your chin. And know this, boyo. I give you my solemn promise. From now on, whenever you or your brothers want to talk, I’ll be here to listen.” In the silence that followed he closed his hand over his grandson’s shoulder and squeezed. “You hear me?”

“Good. Good.” The old man let out a long, slow breath and realized that it was the most he’d ever said about the terrible loss that had them all reeling. And though he’d been forced into it, it had been good to finally get it out. Like cutting open a festering wound and letting the poison seep out.

Snark and Circumstance by Stephanie Wardrop
The Damned Highway by Nick Mamatas
No Contest by Alfie Kohn
Not Quite Terran Part 2 (Scifi Alien Romance Serial) by Erin Tate
Face by Benjamin Zephaniah
A Buckhorn Bachelor by Lori Foster
The Wild Road by Marjorie M. Liu
Evil Grows & Other Thrilling Tales by Loren D. Estleman
On the Victory Trail by Marsha Hubler
Bewitching the Knight: (A Medieval Time Travel Romance) by Diane Darcy