Authors: A Voyage in a Balloon 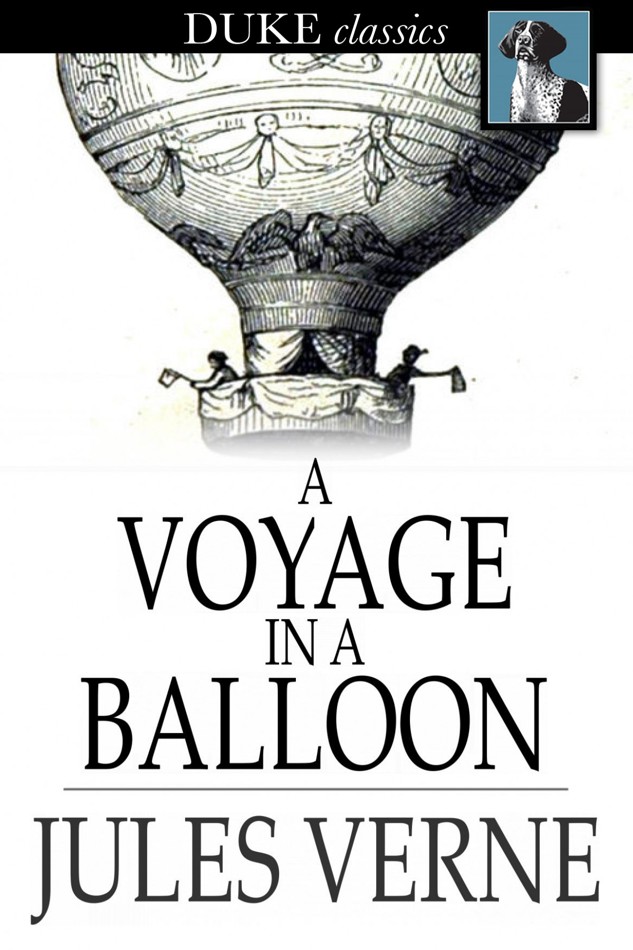 A VOYAGE IN A BALLOON
* * *
JULES VERNE
Translated by
ANNE T. WILBUR

*
A Voyage in a Balloon
First published in 1852
ISBN 978-1-62011-654-8
Duke Classics
© 2012 Duke Classics and its licensors. All rights reserved.
While every effort has been used to ensure the accuracy and reliability of the information contained in this edition, Duke Classics does not assume liability or responsibility for any errors or omissions in this book. Duke Classics does not accept responsibility for loss suffered as a result of reliance upon the accuracy or currency of information contained in this book.
Contents
*
I
II
Endnotes
I
*

In the month of September, 1850, I arrived at Frankfort-on-the-Maine. My
passage through the principal cities of Germany, had been brilliantly
marked by aerostatic ascensions; but, up to this day, no inhabitant of
the Confederation had accompanied me, and the successful experiments at
Paris of Messrs. Green, Godard, and Poitevin, had failed to induce the
grave Germans to attempt aerial voyages.

Meanwhile, hardly had the news of my approaching ascension circulated
throughout Frankfort, than three persons of note asked the favour of
accompanying me. Two days after, we were to ascend from the Place de la
Comédie. I immediately occupied myself with the preparations. My
balloon, of gigantic proportions, was of silk, coated with gutta percha,
a substance not liable to injury from acids or gas, and of absolute
impermeability. Some trifling rents were mended: the inevitable results
of perilous descents.

The day of our ascension was that of the great fair of September, which
attracts all the world to Frankfort. The apparatus for filling was
composed of six hogsheads arranged around a large vat, hermetically
sealed. The hydrogen gas, evolved by the contact of water with iron and
sulphuric acid, passed from the first reservoirs to the second, and
thence into the immense globe, which was thus gradually inflated. These
preparations occupied all the morning, and about 11 o'clock, the balloon
was three-quarters full; sufficiently so;—for as we rise, the
atmospheric layers diminish in density, and the gas, confined within the
aerostat, acquiring more elasticity, might otherwise burst its envelope.
My calculations had furnished me with the exact measurement of gas
required to carry my companions and myself to a considerable height.

We were to ascend at noon. It was truly a magnificent spectacle, that of
the impatient crowd who thronged around the reserved enclosure,
inundated the entire square and adjoining streets, and covered the
neighbouring houses from the basements to the slated roofs. The high
winds of past days had lulled, and an overpowering heat was radiating
from an unclouded sky; not a breath animated the atmosphere. In such
weather, one might descend in the very spot he had left.

I carried three hundred pounds of ballast, in bags; the car, perfectly
round, four feet in diameter, and three feet in height, was conveniently
attached; the cord which sustained it was symmetrically extended from
the upper hemisphere of the aerostat; the compass was in its place, the
barometer suspended to the iron hoop which surrounded the supporting
cord, at a distance of eight feet above the car; the anchor carefully
prepared;—all was in readiness for our departure.

Among the persons who crowded around the enclosure, I remarked a young
man with pale face and agitated features. I was struck with his
appearance. He had been an assiduous spectator of my ascensions in
several cities of Germany. His uneasy air and his extraordinary
pre-occupation never left him; he eagerly contemplated the curious
machine, which rested motionless at a few feet from the ground, and
remained silent.

The clock struck twelve! This was the hour. My
compagnons du voyage
had not appeared. I sent to the dwelling of each, and learned that one
had started for Hamburg, another for Vienna and the third, still more
fearful, for London. Their hearts had failed them at the moment of
undertaking one of those excursions, which, since the ingenious
experiments of aeronauts, are deprived of all danger. As they made, as
it were a part of the programme of the fête, they had feared being
compelled to fulfil their agreements, and had fled at the moment of
ascension. Their courage had been in inverse ratio to the square of
their swiftness in retreat.

The crowd, thus partly disappointed, were shouting with anger and
impatience. I did not hesitate to ascend alone. To re-establish the
equilibrium between the specific gravity of the balloon and the weight
to be raised, I substituted other bags of sand for my expected
companions and entered the car. The twelve men who were holding the
aerostat by twelve cords fastened to the equatorial circle, let them
slip between their fingers; the car rose a few feet above the ground.
There was not a breath of wind, and the atmosphere, heavy as lead,
seemed insurmountable.

"All is ready!" exclaimed I; "attention!"

The men arranged themselves; a last glance informed me that everything
was right.

There was some movement in the crowd which seemed to be invading the
reserved enclosure.

The balloon slowly ascended; but I experienced a shock which threw me to
the bottom of the car. When I rose, I found myself face to face with an
unexpected voyager,—the pale young man.

"Monsieur, I salute you!" said he to me.

"Am I here? By the right of your inability to turn me out."

I was confounded. His assurance disconcerted me; and I had nothing to
say in reply. I looked at him, but he paid no regard to my astonishment.
He continued:

"My weight will disturb your equilibrium, Monsieur: will you permit
me—"

And without waiting for my assent, he lightened the balloon by two bags
of sand which he emptied into the air.

"Monsieur," said I, taking the only possible course, "you are
here,—well! you choose to remain,—well! but to me alone belongs the
management of the aerostat."

"Monsieur," replied he, "your urbanity is entirely French; it is of the
same country with myself! I press in imagination the hand which you
refuse me. Take your measures,—act as it may seem good to you; I will
wait till you have ended—"

"To converse with you."

The barometer had fallen to twenty-six inches; we had attained a height
of about six hundred metres, and were over the city; which satisfied me
of our complete quiescence, for I could not judge by our motionless
flags. Nothing betrays the horizontal voyage of a balloon; it is the
mass of air surrounding it which moves. A kind of wavering heat bathed
the objects extended at our feet, and gave their outlines an
indistinctness to be regretted. The needle of the compass indicated a
slight tendency to float towards the south.

I looked again at my companion. He was a man of thirty, simply clad; the
bold outlines of his features betokened indomitable energy; he appeared
very muscular. Absorbed in the emotion of this silent suspension, he
remained immovable, seeking to distinguish the objects which passed
beneath his view.

"Vexatious mist!" said he, at the expiration of a few moments.

I made no reply.

"What would you? I could not pay for my voyage; I was obliged to take
you by surprise."

"No one has asked you to descend!"

"A similar occurrence," he resumed, "happened to the Counts of Laurencin
and Dampierre, when they ascended at Lyons, on the 15th of January,
1784. A young merchant, named Fontaine, scaled the railing, at the risk
of upsetting the equipage. He accomplished the voyage, and nobody was
killed!"

"Once on the earth, we will converse!" said I, piqued at the tone of
lightness with which he spoke.

"Bah! do not talk of returning!"

"Do you think then that I shall delay my descent?"

"Descent!" said he, with surprise. "Let us ascend!"

And before I could prevent him, two bags of sand were thrown out,
without even being emptied.

"I know your skill," replied he, composedly; "your brilliant ascensions
have made some noise in the world. Experience is the sister of practice,
but it is also first cousin to theory, and I have long and deeply
studied the aerostatic art. It has affected my brain," added he, sadly,
falling into a mute torpor.

The balloon, after having risen, remained stationary; the unknown
consulted the barometer, and said:

"Here we are at 800 metres! Men resemble insects! See, I think it is
from this height that we should always look at them, to judge correctly
of their moral proportions! The Place de la Comédie is transformed to an
immense ant-hill. Look at the crowd piled up on the quays. The Zeil
diminishes. We are above the church of Dom. The Mein is now only a white
line dividing the city, and this bridge, the Mein-Brucke, looks like a
white thread thrown between the two banks of the river."

"There is nothing I will not do for you, my host," said my companion.
"If you are cold, I will take off my clothes and lend them to you."

"Necessity makes laws. Give me your hand, I am your countryman. You
shall be instructed by my company, and my conversation shall compensate
you for the annoyance I have caused you."

I seated myself, without replying, at the opposite extremity of the car.
The young man had drawn from his great coat a voluminous portfolio; it
was a work on aerostation.

"I possess," said he, "a most curious collection of engraving, and
caricatures appertaining to our aerial mania. This precious discovery
has been at once admired and ridiculed. Fortunately we have passed the
period when the Mongolfiers sought to make factitious clouds with the
vapour of water; and of the gas affecting electric properties, which
they produced by the combustion of clamp straw with chopped wool."

"Would you detract from the merit of these inventions?" replied I. "Was
it not well done to have proved by experiment the possibility of rising
in the air?"

"Who denies the glory of the first aerial navigators? Immense courage
was necessary to ascend by means of those fragile envelopes which
contained only warm air. Besides, has not aerostatic science made great
progress since the ascensions of Blanchard? Look, Monsieur."

He took from his collection an engraving.

"Here is the first aerial voyage undertaken by Pilatre des Rosiers and
the Marquis d'Arlandes, four months after the discovery of balloons.
Louis XVI. refused his consent to this voyage; two condemned criminals
were to have first attempted aerial travelling. Pilatre des Rosiers was
indignant at this injustice and, by means of artifice, succeeded in
setting out. This car, which renders the management of the balloon easy,
had not then been invented; a circular gallery surrounded the lower part
of the aerostat. The two aeronauts stationed themselves at the
extremities of this gallery. The damp straw with which it was filled
encumbered their movements. A chafing-dish was suspended beneath the
orifice of the balloon; when the voyagers wished to ascend, they threw,
with a long fork, straw upon this brazier, at the risk of burning the
machine, and the air, growing warmer, gave to the balloon a new
ascensional force. The two bold navigators ascended, on the 21st of
November, 1783, from the gardens of La Muette, which the Dauphin had
placed at their disposal. The aerostat rose majestically, passed the
Isle des Cygnes, crossed the Seine at the Barrière de la Conference,
and, directing its way between the dome of the Invalides and L'Ecole
Militaire, approached St. Sulpice; then the aeronauts increased the
fire, ascended, cleared the Boulevard, and descended beyond the Barrière
d'Enfer. As it touched the ground, the collapsed, and buried Pilatre des
Rosiers beneath its folds."