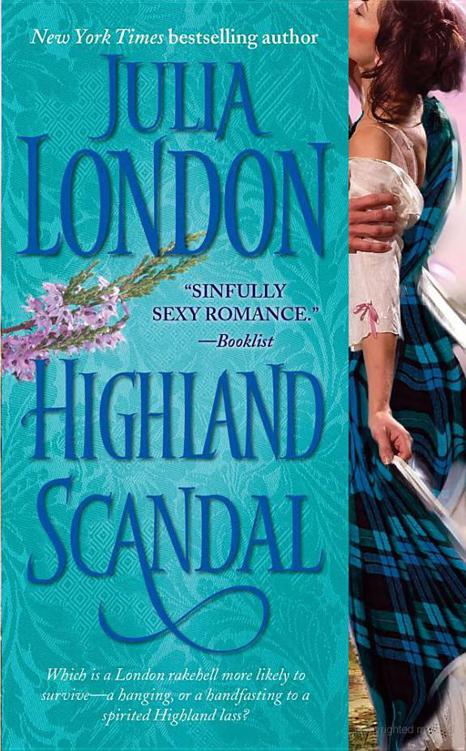 “You deserve to know what it is like to be wholly seduced,” Jack said roughly.

“You deserve to know what it feels like to be aroused to the point of weeping, to be released from that arousal in a manner that leaves you weak and short of breath. You deserve to know the raw intimacy that only a man and a woman can share,” he said, and let his hand drift down her shoulder to the swell of her breast.

Lizzie could hardly seem to catch her breath. “I think you are mad,” she whispered breathlessly.

“Aye, if I’m mad, then half the world is mad with me,” he said softly.

Critical acclaim for the captivating novels of Julia London

“A triumph of wit and passion.”

More acclaim for the dazzlingly romantic novels of Julia London

“In historical romance, Ms. London is one of the very best.”

“London’s characters come alive on every page and will steal your heart.”

“A depth of emotion that takes the breath away.”

“London’s characters become so real they become part of your life while you are reading her books.”

The Book of Scandal

The Dangers of Deceiving a Viscount

The Perils of Pursuing a Prince

The Hazards of Hunting a Duke

“The Merchant’s Gift”
in
The School for Heiresses
anthology

All rights reserved, including the right to reproduce this book or portions thereof in any form whatsoever. For information address Pocket Books Subsidiary Rights Department, 1230 Avenue of the Americas, New York, NY 10020

F
rom his vantage point in the middle of a brambly thicket—which, Jack noted gloomily, had torn his best buckskins—he could see the road through the branches. He’d ridden hard the last hour, pushing his horse to stay a mile ahead of the two men. He gulped down air as he watched them trot by, their hats pulled low over their eyes, their greatcoats draped over the rumps of their Highland ponies and wearing scarves about their necks that were definitely plaid.

Diah,
they
were
Scots! The old man in Crieff had been right—the prince’s men had hired Scots bounty hunters to help find him.

Bloody,
bloody
hell. He’d put himself in quite a quagmire this time, hadn’t he?

Jack waited until he was certain they’d passed and moved down the road a piece before picking his way out of the thicket, cursing beneath his breath when another thorn caught his buckskins. He untethered his horse and tossed the reins over the mare’s neck and swung up onto the saddle.

Jack really didn’t know where to go from here. He’d been running from the prince’s men for more than a month, fleeing England the moment he’d learned he’d
been accused of adultery with the Princess of Wales, running deep into the Highlands.

Adultery
. Jack snorted as he rubbed the mare’s neck. Imagine, taking the Princess of Wales to his bed! It was preposterous to believe he’d do such a thing! Yet Jack couldn’t help the wry smile that curved his lips as he spurred the mare up onto the road.

He’d never taken the princess to his bed, to be sure—but he was guilty of participating in more than one vulgar activity at her residence.

In spite of his innocence, when Jack had been warned that men accused of bedding the princess were being rounded up for questioning and would likely face charges of high treason—a hanging offense—he’d decided to decamp to his native Scotland. That sort of accusation flung about in the midst of a royal scandal rarely played out well for a Scot in England, and Jack Haines, the Earl of Lambourne, who was no stranger to moral transgressions and shocking behavior, knew a bad scandal when he saw one.

Jack reined his horse north, in the opposite direction of the bounty hunters. He had four, maybe five hours of daylight left and would need to find a place to bed down for the night.
Diah,
he dreaded the thought of another night in a bloody cold barn. But a barn was a good sight better than the frigid forest floor.

The air was so still—he could hear the breathing of his mount above the clopping of her hooves.

The only thing he could recall this far north was Castle Beal, and that was several miles away across some questionable terrain, two days’ hard ride from Lambourne Castle, just south of here. He was trying to recall the best route—it had been eleven years since he’d spent any time in Scotland other than the obligatory annual fortnight at Lambourne—when he heard the faint but unmistakable
clop clop
of another horse’s hooves on the road…or worse, a pair of horses.

Jack reined up and listened. Damn their eyes—the bounty hunters had turned back. There wasn’t a moment to spare. Jack dug his spurs into his mare, but she was fatigued and he spurred her too hard; he winced when she whinnied as loudly as if he’d stuck her with a hot poker and broke into a run. The bounty hunters had surely heard it and would realize they were on Jack’s heels.

Indeed, they had gained ground on him throughout the day in spite of wretched terrain and the prime horseflesh he rode. Christ Almighty, where had the prince found these men?

Jack sent the mare crashing into the woods and its thick undergrowth, leaping recklessly over the trunk of a downed tree. A deer path led off to the right; Jack reined her in that direction. The mare careered up the path, splashed through a running stream, but balked at a steep embankment. Jack quickly wheeled her around, pointed her toward the embankment again. “Move on, then—
move!
” he urged her, bending low over her neck and digging his spurs into her flanks.

The horse gave it all she had; she crested the top of the embankment—and reared at the sight of two men on horseback. Jack hung on and managed to yank her around with the intention of going back down the em
bankment, but saw the bounty hunters crashing through the stream and heaving up behind him.

He reined his horse tightly as four men encircled him. He quickly looked around for an escape, any escape, but saw only a pair of shotguns leveled at him. The mare’s spittle was foaming and her breathing labored—she’d not sprint, and even if she did, she’d not get far.

Jack looked again at the shotguns leveled at him as his heart began to pound in his chest. There was no out—he’d been caught. “
Mary, Queen of Scots,”
he uttered irritably as he eyed the one with the largest gun. “I donna suppose we might have a chat, then? I am a wealthy man.”

His answer was the cock of the gun’s trigger.

“All right, all right,” he said, slowly lifting his hands. “You have me, lads.” And he braced himself as they closed in, entirely uncertain if today would be his last.

A Free State by Tom Piazza
Predator by Kartik Iyengar
My Dark Duke by Elyse Huntington
Please Write for Details by John D. MacDonald
The Blind Side of the Heart by Julia Franck
Bitten by Cupid by Lynsay Sands, Jaime Rush, Pamela Palmer
The Road to Magic (Book 1 of the Way of the Demon Series) by Glushanovsky, Alexey
House Arrest by Mary Morris
Impossible Dreams by Patricia Rice
Man On The Run by Charles Williams