Just a Corpse at Twilight 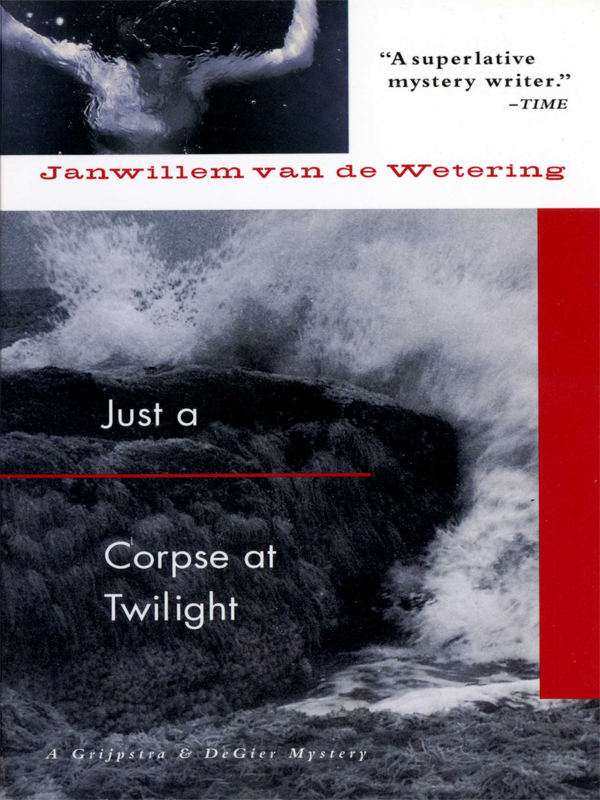 The Corpse on the Dike

Death of a Hawker

Hugh Pine and the Good Place

Hugh Pine and Something Else

Manufactured in the United States

All our intelligent solutions are temporary and are only
valid for a particular attack, not for the entire war
between good and evil.

—from an interview with Abram de Swaan,
Dutch author and sociologist

Henk Grijpstra, private detective, a portly fifty-odd-year-old in a pinstriped three-piece suit, drove home to his girlfriend Nellie's slender gable house on the Straight Tree Canal, inner city, Amsterdam, The Netherlands, where he lived and had his office.

Grijpstra felt contented: He had done a good job that day. It hadn't been much of a job, entailing the pacification of a smalltime blackmailer who had been worrying a smalltime merchant, but once again it had been Grijpstra's own job, a job he could have refused. Although his resignation from the Amsterdam Municipal Police dated back over two years now, there hadn't been a day since he'd been self-employed that Grijpstra hadn't congratulated himself on his exceptional good luck. He could send prospective clients home now, he could say "Well, sir, this isn't
quite
my cup of tea." Grijpstra could also, if he wanted to be polite, recommend the competition. He didn't even have to cite reasons for refusing commissions. There would be reasons, of course: There was a certain type of clients arrogance Grijpstra was allergic to, and he never worked on divorces or other love-related entanglements. "What's love anyway?" Grijpstra would ask his beloved Nellie. He would raise a finger. "I'll tell you what love is. Love is a fart in a brown paper bag." He wouldn't lower the finger until she nodded agreement.

Nellie, smiling sweetly, would make coffee, cut cake, carry in the cat, anything to get HenkieLuwie off the subject. Nellie liked love entanglements herself. Apart from the romantic aspect there was income involved and surely she and Grijpstra needed a good constant cash flow. Would he just look at her fully automated five-story mansion, his fuel-guzzling American four-wheel drive, at his monthly journeys to luxurious Luxembourg, would he just think of the
cost?

"But, HenkieLuwie," Nellie wailed whenever she heard a disgruntled client slam her recently restored antique front door. "Don't we
need
the money?"

"All will be well in the end." Grijpstra, with a wide gesture, would flick all demons of need away. "Don't worry about your worries."

Grijpstra, allowing his full-size Ford Bronco to run amber traffic lights, smiled. He thought ofhis many years in the Amsterdam Municipal Police, the "yessir years," as his former partner, Detective-Sergeant Rinus de Gier, now called them. Cops can't refuse jobs, they're ordered about by superiors. Adjutant Grijpstra and Sergeant de Gier, the Murder Brigade's most respected team, working under a famous chiefofdetectives, could never refuse a case. It wasn't just the chief, the old "commissaris" who ordered them about, it was also the Dutch superego, Holland's sense of righteousness, the frame of national conscience within which adjutant and sergeant acted. Grijpstra and de Gier often dreamed ofbeing free of morals imposed by bureaucratic rules.

Grijpstra also dreamed ofowning his own car. Like the freedom dream itself, the dream vehicle was outrageous. Grijpstra, in all his working years, what with obese Mrs. Grijpstra and the voracious kids, could never afford a private car.

"Can you afford your dreams?" the commissaris would ask. He would pat Grijpstra's shoulder. "Adjutant, once dreams come true, so do their consequences. Can you live with what desire will drag along for you?"

Could he make hunky-doriness last?

Grijpstra gripped the wheel as his body swayed, prey to an abdominal cramp, to what felt like a sharp-snouted beetle gnawing about for a moment, an inch behind his navel. Grijpstra remembered the beetle, it had warned him before.

Was he about to lose something? What did he own that money couldn't replace? His health? He didn't mind getting sick; Nellie would serve him gourmet foods on the little tray table that fit across his legs, fluff his pillows, change the sheets. He could read, watch videos, look through his bird books. Losing his detective license would be just fine too—perhaps it was time to live in the country, potter about, maybe fish in a quiet tributary of the Amstel River. He had enough to do: paint, play drums. Nellie? Grijpstra didn't think he would lose Nellie. Have an accident, lose his life? No more Grijpstra to worry about. No more Grijpstra?

Grijpstra parked the Bronco in the expensive rental garage around the corner, strolled home, got kissed by Nellie and purred at by Tabriz. Tabriz, an oversize cat with a coat like a well-worn Oriental carpet, had once belonged to former Detective-Sergeant de Gier. De Gier, who, like Grijpstra, had announced his resignation at the commissaris's retirement party some two years ago, had been traveling since then. He lived in America now, on the deserted coast of Maine, on his own rented island, where he happily pursued a philosophical quest. De Gier, ten years younger than Gri-jpstra, more intellectual, taller, athletic, and a talented amateur jazz trumpet player, had taken time out in order to grasp the point of it all.

"Good riddance," Nellie would say to her newfound friend, Katrien, "to bad rubbish. . . . Oh, sorry, Henkie-Luwie, I never know whether you're in the room or not. I wish you wouldn't move about so quietly, dear."

Katrien was the wife of the retired commissaris.

Grijpstra's beetle, pushed back by beeftongue and caper stew on noodles, a Nellie specialty that came with a spinach salad, hardly moved about now. Grijpstra, relieved, was about to sit down on the couch for his after-dinner espresso when the beetle bit again, just as the telephone rang.

Grijpstra, massaging his stomach, pointed his nose at the phone. "You take it, Nellie."

"HenkieLuwie," Nellie said from the couch. "Please. It's after nine. It'll be a client."

The beetle tore at Grijpstra's intestine. Grijpstra, trying to deal with the animal's onslaught, waited for the answering machine to click on.

Grijpstra sighed and picked up the phone.
Rinus,
he should have said joyfully. His old pal phoning all the way from America, how nice.
How're you doing, old buddy? Good
to hear you. Everything okay?
Grijpstra didn't say any of that.

"Tell me about it," Grijpstra said.

Grijpstra and de Gier had been cops together for years. Then, a few words sufficed to clarify a situation, but that was in the past. De Gier was a private citizen now.

Grijpstra covered the phone's mouthpiece. "Rinus says he killed a woman. The idiot kicked her down some cliffs. Must have been drunk. Stoned maybe."

Grijpstra, his hand still on the phone, looked peaceful enough, with his back to a window in Nellie's cozy sitting room, sitting on the armrest of her couch. Behind him elm trees on the canal's quay slowly waved their branches, looking like comforting holy men's arms in wide sleeves woven from countless fresh green leaves. A sea gull flying close to the house briefly filled the window's frame. Geraniums blossomed on the wide windowsill, the middle plant glowing deep red, the other two pink.

"Not really, right?" Nellie asked. She looked back to the screen—her evening images were never real, not even when the news readers showed the misery of famine, crime, or war.

"Not really, right?" Grijpstra asked across the Atlantic.

De Gier's reality was a jetty on the coast of Maine, where he screened his eyes from a cloudless sky above an energetically foaming Bay of Fundy. The turbulent water reflected harsh daylight because, given the earth's restless rotations, the East Coast of the United States is still going strong six hours after Western Europe's day is over.

De Gier was telephoning from the fishing village of Jameson, Maine. The battered pay phone, center of a random design of scratched and written numbers, was attached to a weathered board on the outside wall of Jameson's only restaurant, Beth's Diner. The diner was housed in a ramshackle building, still elegant in its old age, surrounded by a gallery of chiseled slender posts under a moss-and-lichen-covered shingled roof. The restaurant's overall color had become silver-gray within peeling baby blue framing. Rotted-out gingerbread decorations and cornerposts sculpted long ago to resemble Greek pillars witnessed past glory, dating back to Jameson's days as a real port, when it had wharfs where clipper ships were built for the China trade, when the town was the hub of a worldwide lumber business, when it exported granite cut out of the islands, the building blocks of America's big cities. Now there was only lobstering, with crabbing on the side (as long as they were in the lobster traps anyway), and just a touch of tourism, accidental mostly, for Jameson was well away from any beaten track. There were some old folks too, in RVs or trailers hiding behind cedar fences, snowbirds who were gone before the autumn colors faded. Then there were oddballs "from away," like Rinus de Gier, who, since his resignation from the Amsterdam police force two years back, had been without a fixed address or a known source of income.