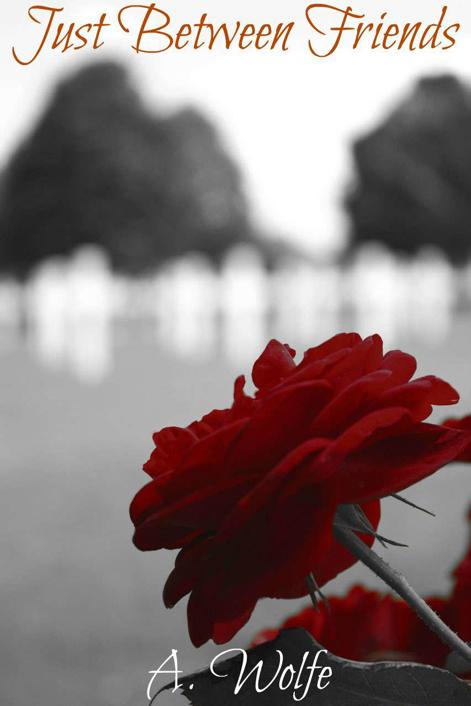 All rights reserved.  No part of this book may be reproduced or transmitted in any form or by any means, electronic or mechanical, including photocopying, recording, or by any information storage and retrieval system, without permission in writing from the copyright owner.

All characters are fictional, and resemblance to any person living or dead, is accidental.

‘Just Between Friends’ is the copyright of the author, A. Wolfe, 2013.  All rights reserved.

C
over photo provided from PublicDomainPictures.net

It all started that day back in 57.  She and Steven were only fourteen at the time, and it happened so fast.  They were
in the tree house that she, Steven and Alec had built.   The three had always done everything together, but that day was different, Alec was sick and she and Steven were alone.

There had been a sort of nervous tension ever since they had climbed up there.  Steven moved closer beside her and their legs brushed against each other.  It sent a queer sort of shiver up her spine.

“Miranda, we’ve known each other a long time,” Steven had said, as he brushed her long dark tresses from her face.  “Haven’t you ever wondered what it would be like to kiss each other?”

Miranda was speechless, even though that’s what she wanted to do more than anything right now.  She looked into Stevens big blue eyes, and it was as though the world had stopped.  She felt his lips touch hers and she seemed to melt inside.  She put her arms around his neck, as his slid around her waist.  The kiss didn’t last long, but it seemed an eternity.  When it ended, she felt disappointed. “Steven, what if someone would have caught us?”

Staring into her dark brown eyes, he answered, “No-one is going to come up here.  Listen, Miranda, I’ve been having these feelings about us for a while now.  I just can’t stop thinking about you.  It’s like being friends isn’t enough anymore.”

“Miranda, are you up there?”

“Dinner’s on the table.  Come down and wash up,” her mother ordered.

Nervously, Miranda stammered, “I’ll be right there.”  Slowly, she arose and started to walk away.

Steven went after her.  “Miranda, we have to talk about this,” he pleaded.

“I can’t now Steven.  I need to know what I’m feeling first.”

That had been three years ago, and although she knew now that there would never be anyone for her but Steven, she just didn’t know what to do about Alec.

Miranda woke early that morning, on the dawn of her seventeenth birthday.  She hadn’t slept well that night, for Steven had said he had a big surprise for her.  They were going on a picnic and he had promised to give it to her then.

The sun was shining brightly through the thin laced curtains that covered her windows, and Miranda
squinted her eyes as she tried to get them adjusted to the light.  She stretched her arms above her head, and yawned, then quickly threw the covers from her body, and placed her feet on the floor.  She was still sitting there when her door flew open.

Cassandra, her younger sister, who was thirteen, came bounding in the room.  “Oh Miranda, you’d better hurry downstairs.  Mother has your favorite breakfast ready for your birthday, but act surprised.”

Exasperated, Miranda exclaimed, “Cassandra, can’t you see I’m not even dressed yet?  Now, go away!”

Instead of obeying her sister’s command, Cassandra made her way to the bed, and plopped down beside Miranda.  “Ooh, you have to look just right for Steven, ooh Steven.”

Miranda, feeling very annoyed, picked up her pillow, threw it at her sister, and yelled,   “Cassandra, just get out of my room!”

Paying no attention, she only taunted her more.  “If I was you, I’d go for Alec.  He’s much cuter.”

Miranda felt she knew the real reason Cassie thought this way.  She was almost certain she had a crush on Alec’s younger brother Ben, but she just didn’t feel like putting up with her nonsense today, so she screamed, “Well, I’m not you, now am I?  Now get out!”

“What’s all the commotion up here?”  Frank Porter demanded, as he made his way into the room.

“Father, would you please make Cassandra stop pestering me?”

Being the older brother of two younger sisters, Frank knew how annoying they could be, so he scolded, “Cassandra, go help your mother with breakfast.”

Why did he always take Miranda’s side?
Cassie pouted as she quickly leapt from the bed, throwing the pillow down on it.
It wasn’t fair
.  She stomped to the door with her long dark braids bouncing, glared over her shoulder at her sister and father, and quickly left the room, bounding down the stairs to the kitchen.

Miranda couldn’t help but chuckle.  Her sister was quite temperamental.  Frank just shook his head.

There was a slight breeze blowing through the open window, and the sun’s rays weren’t quite as bright now, as Miranda rose to her feet and made her way across the room to where her father stood.  “Papa, Steven and I are planning on going on a picnic.  He says he has a surprise for me.  It is alright, isn’t it?”

Frank rubbed his fingers across his beard covered chin, then up over the top of his nearly bald head, where only a thin layer of his dark brown locks remained.

He knew it wouldn’t be too much longer before his daughter would be married and gone, but he didn’t want to think about that right now.  It made him feel sad inside, so he just smiled and replied, “Well, I suppose so Miranda, but I’m sure your mother also has plans for your birthday.  You’d better check with her first.”

She moved closer to her father and hugged him.  “I assure you Papa, I wouldn’t ruin any plans mama has made.  They mean a lot to her.  I’ll just finish dressing, and be right down.”

Frank stood, his dark eyes staring at his daughter for a moment.  It was hard to believe that she was seventeen already.  It seemed only yesterday she was just a little girl.  Now, here she was, all grown up.  Where does time go?

“Papa, did you hear me?”  Miranda asked, her eyes so like her fathers, were imploring his.

“I’m sorry, honey.  I was just reminiscing, I suppose.  I’ll leave you alone then.  Hurry up though, alright?  You don’t want to keep your mother waiting.”

Miranda only nodded, as he turned and left the room.  She had to look just right for Steven today, just as Cassandra had implied, for she knew something special was going to happen.  She could just feel it.

After only a short debate, she decided to wear her yellow dress with matching bonnet.  It was Steven’s favorite.  When she had finished getting ready, she checked her reflection once more in the mirror, and after giving each of her cheeks a pinch, to bring color to them, she then hurried downstairs.  Her mother had prepared her favorites for her birthday breakfast, and when Steven arrived to pick her up at noon, she felt much better.

“Good afternoon, Miranda,” he greeted her.  “I hope I haven’t kept you waiting too long.  The chores took longer than expected.”

As she walked toward him, she answered, “No, I’ve been busy preparing a special picnic lunch for us.  I sure hope you’re hungry.”

Steven dismounted and walked to the passenger side of the wagon.  He helped Miranda settle in, and declared, “I’m starving!”  He was really just saying that, because he had something to ask her, and it was making him very nervous inside.  Food was the last thing on his mind right now.

The sky was so bright and clear, just looking at it hurt your eyes.  It was hot, but not unbearably so, a perfect time for a picnic.

As they drove along, Miranda noticed that Steven wasn’t his usual talkative self. His sandy-blonde hair was disheveled from the wind, and laid in strands across his forehead, and falling slightly over his eyes. He glanced in her direction for only a moment, and she could see nervousness in the deep blueness of them.

“Steven, is something wrong?  You’ve hardly said a word since we left my house.”

He looked at her lovingly and answered, “No baby, I’m fine.  I just have a lot on my mind, that’s all.”  He could feel his palms sweating, as he held onto the horses reins.

Neither spoke another word until they arrived at the spot where they were to have their picnic.  Miranda had always loved this area.  It was so beautiful, with the clear stream.  The meadow was already beginning to come alive with wildflowers peeking through the grass. It was only the middle of May, but it had been so warm.

Steven helped her out of the buggy, and they walked to a clearing in the meadow.  They spread the tablecloth on the ground, and promptly began emptying the picnic basket.  There was fried chicken, cole slaw, ears of corn, potato salad, and for dessert, a warm apple pie.  Normally just looking at all the delicious dishes would have made Stevens mouth water, but today he was much too nervous.  He had something more important on his mind.

Miranda just sat there, staring at Steven.  Why was he acting like this?  His brow was sweating, making his hair stick to it.  Every time she looked at him, he lowered his head.  His shirt had the two top buttons undone, and she could see the perspiration trickling down his chest.