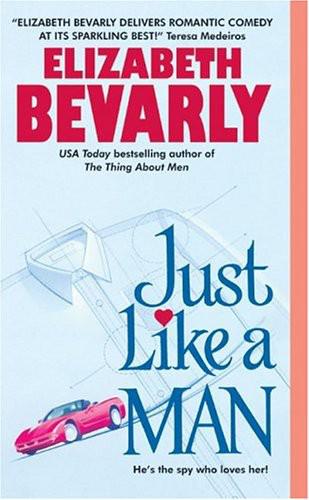 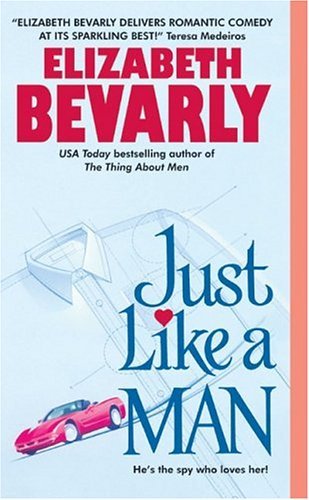 The Thing About Men

The Ring on Her Finger

Take Me, I'm Yours

He Could Be the One

How to Trap a Tycoon

This is a work of fiction. Names, characters, places, and incidents are products of the author's imagination or are used fictitiously and are not to be construed as real. Any resemblance to actual events, locales, organizations, or persons, living or dead, is entirely coincidental.

An Imprint of HarperCollinsPublishers

Excerpts from
Just Like a Man
copyright © 2005 by Elizabeth Bevarly;

The Trouble With Valentine's Day
copyright © 2005 by Rachel Gibson;

Flirting With Danger
copyright © 2005 by Suzanne Enoch;
Lady in Red

Avon Trademark Reg. U.S. Pat. Off. and in Other Countries, Marca

Dedicated to the memory of

And a friend who came into my life

when I had precious few of those.

There's a terrible disturbance in the Force without you, Chet.

"You have to do this, Raptor."

"That oath stopped applying when I turned in my weapon and left the service."

"That oath
never
stops applying. And by the way, we don't have any record of you turning in your weapon. And
nobody
leaves this service. Not entirely."

In a windowless office in a nondescript building in an uninteresting neighborhood in an unremarkable section of the nation's capital, two men ignored government-issue chairs and stood on each side of a government-issue desk where a government-issue lamp lobbed government-issue light into a room made blue and fragrant with nongovernment-issue cigar smoke. The one called Raptor glared at the One Whose Name Could Not Be Spoken—mostly because Raptor didn't know what his name was—and he tried to remember just what the hell he'd done with the weapon he should have turned over to his superior five years ago.

It was probably still in his footlocker, he thought, the one he'd bolted tight after turning his back on this very office and hadn't opened since, because he hadn't wanted to think about this place. At the moment, that footlocker was—damn—probably stowed in the garage. He'd find it somewhere beneath rakes and power tools and an inflatable pool ducky—still inflated, even though no one had used it for years—and that stupid badminton kit he never had gotten set up in the backyard.

Note to self,
he thought,
locate and clear out all surviving remnants of previous life. Both physical
and
psychological.
It was way past time.

"I'll mail my weapon to you," he told the other man now.
Just as soon as I find it,
he added to himself. Maybe it was in the locker in the basement where he'd stowed the three gallons of Moroccan Sunset paint he'd never gotten around to putting on the dining room walls…

"Hang on to it," his superior told him. "You're going to need it for this assignment."

"There is no assignment," Raptor countered. "I quit. Five years ago. Remember?"

"You can't quit," the other man replied. "I just told you. Once you join OPUS, you're in for life."

"That wasn't in the job description."

"There is no description for this job."

Which, Raptor had to concede, was true. His position at OPUS had been seat-of-the-pants; probably because the office itself was seat-of-the-pants. Everything at OPUS was on a need-to-know basis. In fact, few people at OPUS knew who was in the know, or knew who decided who would be in the know. All Raptor had known by the end of his time there was that he'd wanted a life. A
real
life. One that contained real pleasures instead of real dangers.

"You have to come back," the other man told him. "We need you. Naturally, we have other people who have been working on this assignment, too—a handful of them for years now. But we need
you
specifically to ensure success. We're close, Raptor. So close. And you could help us bring it home."

"Why?" he asked. "What's so special about this assignment that a hundred other agents couldn't complete it just as well?"

The other man said nothing for a moment, only gazed at Raptor as if he wondered how much the other man should know. Finally, though, he uttered a reply. A single-word reply, but one that told Raptor everything
he
needed to know: "Sorcerer."

It was a name Raptor hadn't heard for years, one he had thought he would never hear again. Mostly because he thought Sorcerer was dead. If not literally, then certainly figuratively. Because the last time he'd seen Sorcerer, Sorcerer had been on the road to perdition, and he'd been heavily packed for the trip.

"What are you talking about?" Raptor asked his superior now.

"We have a situation," the other man said. "And it's right in your backyard. And since you and Sorcerer used to be—"

"I haven't seen Sorcerer for years," Raptor interrupted the other man, not wanting to think about that. "He's nothing to me now."

His former boss eyed him intently. "Well, he's about to become your worst nightmare. Hell, he's about to become the entire world's worst nightmare. He's up to something, Raptor. We don't know what yet, but we know it's big. Bigger, even, than before. He surfaced in Indianapolis a few months ago, not long after the announcement that Indianapolis would be playing host to a presidential debate in the fall. He's posing as a legitimate businessman, working for the city's biggest employer, CompuPax Computer Systems. Right now, that's all we know."

"Well, why the hell haven't you brought him in, if you know where he is?" Raptor asked.

"Because, for one thing, we want to see what he's up to," his superior said. "For another thing, what we have on him now is shaky and years-old. There's no guarantee we could put him away for any length of time. But now that he's surfaced again, we have another chance to really nail him. The only thing that would bring Sorcerer out of the woodwork would have to have a huge payoff. And this time, we won't be blindsided by him. We'll be all over the bastard."

"Well, he does have a degree in computer engineering," Raptor reminded his superior. "Maybe he
is
a legitimate businessman now."

The other man didn't even comment on that. And Raptor had to concede that what he'd said was pretty damned ridiculous. "Look," he continued, "what interest could Sorcerer possibly have in what two candidates have to say during an election year, huh? The guy never cared about anything but himself."