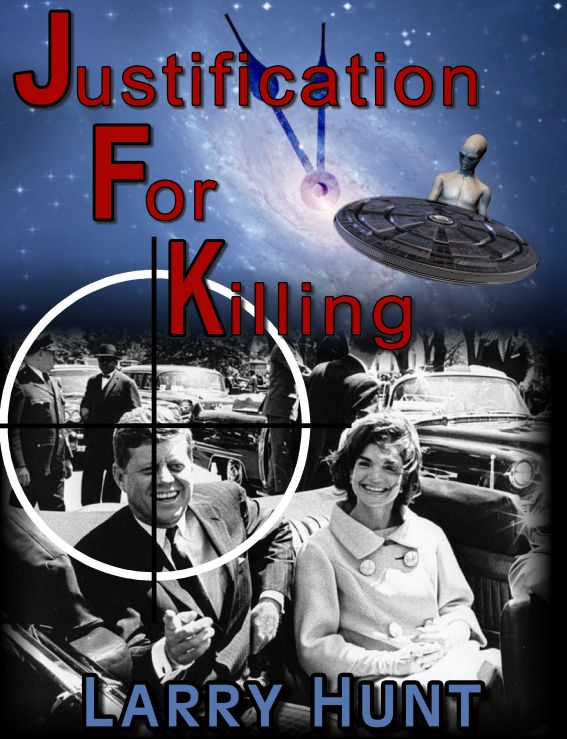 (Adventures of the Scarburg
Family)

All rights reserved.
Without limiting the rights under copyright reserved above, no part
of this publication may be reproduced, stored in or introduced into
a retrieval system, or transmitted, in any form, or by any means
(electronic, mechanical, photocopying, recording, or otherwise)
without the prior written permission of both the copyright owner
and the above publisher of this book.

Justification For
Killing
is a work of fiction. Names,
characters, places, media, and incidents are either the product of
the author's imagination or are used fictitiously. In some
instances actual facts and names are interspersed within the
fictional account. The author acknowledges the trademarked status
and trademark owners of various products referenced in this work of
fiction, which have been used without permission. Further note:
this IS a work of fiction; it is not intended for use by serious
researchers. The author has taken liberty with names – leaving some
as history has named, changing others, altered places, events and
sequences of event. In short, the author made the historical events
fit the fictional storyline. Extensive use of the report of
“President’s Commission on the Assassination of President Kennedy”,
commonly called the Warren Commission (WC), Nov 29, 1963 has been
used through out to lend credence to the plot of the story. In some
instances the WC testimony and conclusions were used exactly as
originally published; in other instances the author added to,
subtracted from or embellished the WC findings.

To every thing there is a
season, and a time to every purpose under the heaven:

Cathay Pacific Flight
6073’s path of flight was directly over the North Pole heading
toward the setting sun. Its blinding rays were directly in the
pilot’s eyes - even the polarized sunglasses did not offer much
protection. “How long before we make a course correction and turn
south over Russia? I’ll be glad to get this blinding sun out of my
eyes,” complained Captain Haskell Hunter, a veteran pilot of over
twenty-eight years.

The young co-pilot, Donald
Walker, sitting in the right seat, turned to the old flier and
remarked, “Captain, we have more to worry about than the sun in our
eyes, just received an urgent weather alert - there is a large,
weather system moving across Russia. It will move directly across
our route as we fly south, and by the reports I’m getting, it’s a
mean one! Oh! To answer your question Captain - course correction
in twelve minutes, twenty seconds.”

“
Can we go around the
storm?”

“
Afraid not Captain. I’ve
just checked the International Flight Route Agreement. We are only
allowed a deviation of fifty miles from our scheduled flight plan.
This monster of a storm will swallow fifty miles and spit it back
at us. What about going over?”

“
Yeah, right Captain, just
thinking out loud trying to convince myself my numbers might be
wrong. I guess we will just batten down the hatches, and fly
through the beast the best we can.”

It had been an hour or so
since the Captain had announced their entrance into the Russian
airspace on their way to the People’s Republic of China. All the
passengers in First Class, Business and Economy, were settled back
watching movies, reading, snacking, sleeping or toying with their
laptops. Their world was warm, peaceful and quiet - up front in the
cockpit a totally different scenario was beginning to play
out.

Around 8 p.m. the storm
had totally blanketed the Chek Lap Chuk airport in Hong Kong. A
growing backlog of planes circling above waiting to land had
continued to increase. A couple of planes, both from Cathay Pacific
also, had made requests for emergency landings, as they began to
run dangerously low on fuel. A number of other aircraft from
different carriers were being diverted from Hong Kong to airports
on the Chinese mainland and to the island of Taiwan, northeast of
Hong Kong.

At that moment in
the skies above Russia the same beast of a blizzard was taking a
tremendous toil on Captain Hunter’s “Triple Seven” as the Boeing
777 was called. It was being tossed from side to side like a rag
doll. One moment the plane was flying level, the next it was yawing
at a forty or forty-five degree angle. The passengers were
hysterical. Someone yelled, “We are going to die!” Another and
another could be heard praying out loud...
“Our Father, Which Art in Heaven...”
A couple more had their rosary beads in their
hands.

As soon as the Captain
could gain control and steady the aircraft another blast of
turbulence would cause the plane to drop hundreds of feet. The
aircraft then caught an updraft and just as swiftly ascended a
couple of hundred feet. The passengers were scared; they weren’t
the only ones, Captain Hunter and Co-pilot Walker were sweating
bullets too.

Sam Lin and Si Lei Kim’s
Fight 6073 was on a direct head-on collision course with an Airbus
A330 in-route from Hong Kong to New York.

Captain Hunter immediately
switched on his landing lights, hoping the on-rushing pilot would
be able to see his Boeing 777. Both Captain Hunter and Mr. Walker
peered intently through the snow-covered, windshield searching for
the source of the TCAS warning. The co-pilot scanned the radar
screen. “There he is! There... there,” pointing with his finger at
the display as though that would enable Captain Hunter to see the
on rushing plane. Captain Hunter was scared; he brow was wet, and a
bead of sweat had formed at the tip of his nose. Yes, he was
scared, not so much for his own safety, but he had 350 souls on his
Boeing’s manifest and there were, at least, another 300 plus on the
Airbus. Combined, the count was over 650 passengers and crew,
hurling toward each other on a deadly collision course in the skies
over Russia. No one had ever survived a crash between two jumbo
jets at their altitude, and at their speed. He knew the result was
going to be an instant, painful death to all the passengers and
crew on both planes.

For some unknown
reason, the oncoming Airbus’s TCAS alarm was not working properly,
or there was something terribly wrong with its crew. Possibly they
had taken a direct lightening strike. The reason was unimportant at
this very moment. What
was
important – a head on collision was
imminent.

Both airliners, the Cathay
Pacific 6073 and the Airbus, feature electronic or digital
instrument displays known in the industry as ‘glass-cockpits’.
These cockpits take the form of large LCD screens, not the old
style dials and gauges. The earlier, traditional cockpits relied on
mechanical gauges for information. No such gauges on these modern
cockpits, they look more like something from a video game. Flight
information is displayed as needed; however, Captain Hunter knew
over fifty blackout incidents had occurred in the Airbus with
glass-cockpits since the Airbus fleet came on line. A serious
glass-cockpit blackout can cause the loss of half of a plane’s
Electronic Centralized Aircraft Monitor (ECAM) system. The ECAM
monitors the aircrafts functions and relays them to the pilot, it
will also display failure messages. In certain cases, the pilot is
instructed as to corrective procedures, which must be taken to
correct the problem. It affects all displays as well as all radio,
transponder, TCAS, and altitude indicators.

Was losing ECAM bad? Bad
was not a serious enough word to describe this life or death
situation! A jet airliner, hurling through the air at over 400 mph,
the results can be catastrophic. At this speed, the two planes were
closing the distance between each other at the rate of a mile every
five seconds. Captain Hunter realized a head-on collision was to
occur within seconds, and he and his co-pilot were going to be the
first on the scene. That was an extremely unsettling
thought.

Switching on
the
‘Fasten Seat Belts’
sign Captain Hunter grabbed the intercom and
yelled... yes yelled. He knew the manual said to remain calm, but
the author of the book had never been in the cockpit of a 300-ton
missile flying over half the speed of sound, which was aimed
directly at another missile of equal size and speed.
“Prepare for collision!! Prepare for
collision!!”
He yelled loudly. In the
passenger compartment, flight attendants, recognizing the tone of
the Captain’s voice, literally dropped trays of food and drinks,
and began running up and down the aisle instructing the passengers
in the proper crash positions before impact.

Needless to say, the Kim
brothers were now wide-awake. Shaking with fright Si Lei yelled
back, “Sam Lin! Did the Captain say collision?”

Without answering Sam Lin
began grabbing their winter coats from the overhead storage bin.
“Put your coat on immediately, fasten your safety belt tightly, put
your pillow in your lap and bend over and place your head on it.
Now!! Do it now Si Lei!!”

Back in the cockpit
Captain Hunter could see the oncoming Airbus in the flashes of
lightening and blowing snow. He pushed hard on the yoke and right
rudder causing the giant aircraft to begin a descent and a roll to
the right, but Captain Hunter had been flying too many years - he
knew a collision was inevitable - the plane was just too large and
cumbersome to avoid crashing head-on into the oncoming Airbus. The
moment of impact was just a couple of seconds away. Captain Hunter
realized the inevitable. Turning toward his co-pilot he softly said
with a degree of finality and calmness in his voice, “It’s been an
honor flying with you Donald! May God be with you!”

The words had barely left
his lips when an object appeared off his three o’clock. It was
heading toward them at an incredible speed. The Captain later
estimated it had to have been traveling in excess of 3,000 miles
per hour. It passed directly between the Captain’s Boeing 777-300
Cathay Pacific flight and the oncoming Airbus. Captain Hunter got a
glimpse of it, but it was so fast a mere blink of the eye and he
would have missed seeing the object altogether.

The Captain could see the
object was glowing as if it were hot. The surface appeared shiny.
The craft was round and saucer shaped. He estimated it must have
been at least one hundred feet in diameter. “Donnie, did you see
that? Was it a UFO?” There was no response. The co-pilot was
sitting in his seat with a death grip on the yoke, a blank stare on
his ashen face. “Don! Don!”

PREPARE TO CRASH! PREPARE
TO CRASH!

At that precise moment, a
tremendous turbulence struck the battered 777. It was like running
into the backwash of a hundred jet engines. The Captain could not
maintain control of the plane - it immediately began to roll
over... once... twice... on the third roll he began to get control
and slowly leveled the plane, but the airliner was descending,
descending fast. So fast Captain Hunter could not pull the yoke
back to slow down the plunging aircraft. “Donald!
Donald!”

Rise of a Phoenix: Rise of a Phoenix by phill syron-jones
To Seduce a Rogue by Tracy Sumner
The Trials of Lance Eliot by M.L. Brown
The Sweetest Summer: A Bayberry Island Novel by Susan Donovan
Oliver Twist Investigates by G. M. Best
Collector's Item by Golinowski, Denise
Unexpected Chances by Carly Phillips
A Daughter's Dream by Shelley Shepard Gray
With This Kiss (Windswept Bay Book 3) by Debra Clopton
A Bodyguard to Remember by Alison Bruce