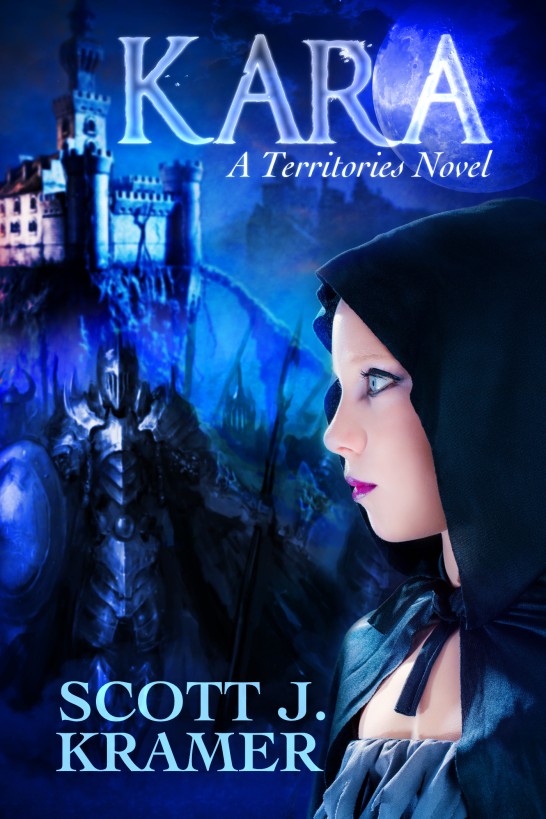 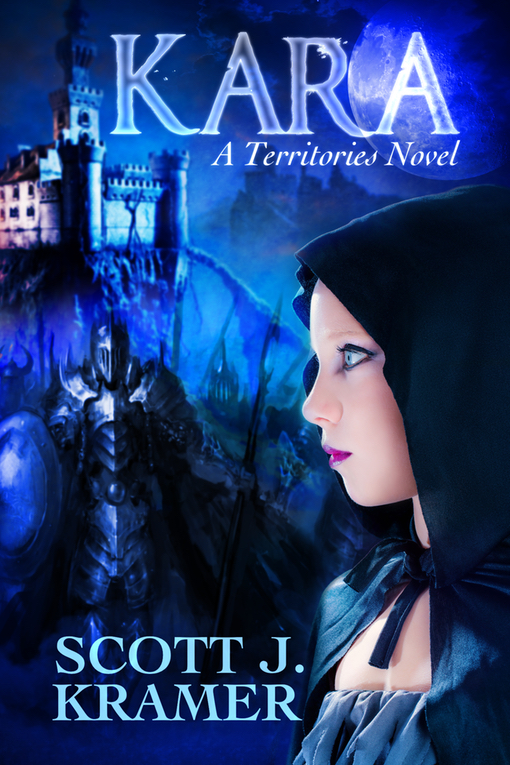 This is a work of fiction. Names, characters,
places, and incidents either are the product of the author’s
imagination or are used fictitiously. Any resemblance to actual
events, locales, organizations, or persons, living or dead, is
entirely coincidental and beyond the intent of either the author or
the publisher.

All rights reserved, which includes the right
to reproduce this book or portions thereof in any form whatsoever
except as provided by the U.S. Copyright Law. For information
address Torquere Press, LLC, P.O. Box 37, Waldo, AR 71770

To Amanda, my beautiful wife. Without her, I
would be adrift at sea. She keeps me grounded and pointed in the
direction of success.

Twelve year old Kara is on the run from King
La’ard, but she doesn’t know why. Something is after her. Becoming
trapped in the Territories, where humans are unknown and elves,
orcs and dwarves roam the lands, Kara finds comfort with a Dwarc
named Hambone, Dante the werefox, and Grace the sprite. In her
effort to get back to the human land of Faldoa, she finds the
assistance of a reluctant wizard and becomes the prey of an
assassin elf. Kara must find a way back to Faldoa and then also
deal with the evil thing stalking her.

To my first editor of Kara, Karen ‘The
Hammer’ Block. She taught this teacher a thing or two about
writing. With her tough love, I bring you a tale worthy to
read.

To my second editor of Kara, Deelyah Mullin.
She has saved me from people criticizing me because of the mistakes
in the text. ‘You’re an English teacher after all.’ Thank you

To my beta readers:

Maria Ramsey—”No, I don’t have any more pages
for you to read!”

Carolyn Kesterman—Watch for her to be famous
one day.

Julie Ahrnsen—Gave me my first negative
review. Thank you.

Rachel High—Inspired many a character (and
many a gray hair).

Audrey Webster—”Do I have all my books back
yet?”

and Jennie Turner-Collins—Thank you, all.

To all my students: The words I write are
for you. Read, and continue to read. (At least, make your reading
teachers happy.)

The thing before him was no longer his
wife, his beautiful Rose. It was pure evil, a wraith older than
time, and begging to be let out of its cage. But inside her—it—a
demon lurked, hate-filled, malicious, and ready to seize that one
chance to be set free.

And now he had only one shot at
capturing it for all time. Through all his research and studies and
trips into the abyss of magic, he had only come up with this one
solution. The mirror, an everlasting prison perhaps for the vile
thing. Everything had gone into the mirror’s creation, including
blood from himself. This had to be the be-all end-all.

You’ve come to try and best me again,
Guillaud. Foolish mortal. Come…come into my arms and give your
sweet love a kiss.
The wraith cackled. The sound was hideous,
like that of a thousand rats squealing in delight as they feasted
on the rotting carcass of a bloated dog.

His brain swam with the visual, but he
shook it away. He needed to remain focused. There was a ritual that
needed to be followed exactly. One wrong word and all his planning
would be for naught.

The wizard pressed his hands together as
if in prayer and cleared his mind of all chaos. The thing in the
cage watched him intently. He knew it was hungry. He had starved
it, making it weak enough for this containment spell to work. Now
it wanted to feed. But one touch and he was doomed. It would feed
on him, sucking his body dry.

He slid the mirror closer to the cage.
It stood tall, almost cresting him. The frame was made of dark,
soul-less crystal. Intricately carved throughout the rock were
forgotten spells and runes, symbols of old. Such a feat to
manufacture the thing, this mirror nearly cost him everything.
Gold. Strength. Willpower. Every day he doubted himself. Was this
the right course? Could he restore Rose by entrapping the wraith?
In the end, would all the effort be worth it?

Beautiful. But what’s a silly mirror to
me? Just reach out and grasp my hand. Please, Guillaud. I long to
touch you. To touch you again after all these years. That is what I
need.

Her voice enticed him. Several times
before he’d felt the need, the desire to reach out and touch her,
but he had always resisted. To touch her was to die. This was not
his sweet Rose, but a demon.

He began to chant the spell and
manipulated his hands in intricate patterns. His senses focused
inward, blocking out all distractions.

An unnatural silence spread through the
chamber when the spell completed. A rush of wind rippled the
torches upon the wall. The mirror glowed with a slow, pulsing blue
light. In the cage, the creature stared at the object. Its mouth
hung open, making its appearance look even more ghoulish. Guillaud
suppressed a shudder.

Mine…mine…
, the wraith cooed. It
reached toward the pulsating surface.

The wizard brought the mirror closer. He
was ready for this nightmare to be over. A touch, a single touch
from the creature on the mirror would seal the spell. His eyes
concentrated on the wraith’s hand as it wavered near the
mirror.

“Come on…come on,” he murmured.

Fool!
The talon whipped sideways
and seized his arm.

Pain burst through him. Knife, fire,
stinging, electric shock! Lightning bolt agony screamed from every
fiber of his being. He released his hold on the mirror and it
toppled to the floor. His ears rang with the demon’s cackles and
his arm pulsed. He felt his life’s energy surge from his body as
the creature began to feast.

Guillaud thrashed and flailed against
the cage but the wraith’s grip was too strong. He could not pull
loose. The demon’s grasp held strong like iron. The more he pulled
away, the more burning, flesh-searing pain came. He had to break
free. It could not end with him being eaten by this monster. And
the demon was too hungry to savor this meal.

There had to be another way to save
himself and Rose. He glanced at the mirror lying on the floor.
Salvation was so near but the wraith had to touch it. He needed to
bring the mirror closer.

He strained toward the mirror and hooked
the edge with his foot. He inched the object
nearer
until he could reach it with his free hand.
He lifted one edge and pressed it to the wraith’s
palm.

Contact made, the spell was sealed. No
big explosion or spark erupted. The only change was the thing’s
laughter. Cackling changed to screaming.

Inside the cage, the body dropped. The
fist,
once tightly gripping the
wizard
,
went limp.

Guillaud stumbled, leaning against the
bars of the cage to steady himself before he collapsed as well.

He turned to look at the mirror. Did the
spell really work? Was the creature trapped?
The
dark, reflective surface lured him in
. Did he dare touch
it?

His left hand flopped loosely at his
side. He shoved his sleeve up and looked at what remained of his
arm. Just skin covering the bones. All the flesh had been…sucked
away
.

Rose!
He had forgotten about
her.

His eyes flicked to the cage, his hand,
the mirror forgotten. He sank down to his knees and cradled his
wife’s head
.
Rose lay on the floor,
unmoving. Dead.

No!
Rose’s death had not been his
intention.

His cry of pain rattled the cavern.

Kara’s head snapped up at the faint sound of
her father’s voice. “Daddy?” Why would her father be telling her to
run away? What was going on? She’d only come up to her favorite
spot on the top of the hill an hour ago to play with her dog,
Birch, when she finished her chores. Everything had been fine at
home then.

She pushed Birch off her lap and rolled onto
her knees. She shaded her eyes with her right hand and looked
towards her home a quarter mile away. Black smoke filled the sky,
not the smoke of burning trash, but that of something large
ablaze.

Birch nipped at her hand, trying to get
Kara’s attention. She flapped her hand at him. “Get down, Birch. I
don’t have time to play with you. We need to get home right away.
Something’s wrong there.”

Quickly getting to her feet, she began to run
through the meadow.

Birch growled at her heels, trying to play.
The stick in his mouth poked at her ankles as he worked to gain her
attention. He became a nuisance the farther they went.

One word and the dog obeyed. This was not a
game. He dropped the stick and trotted alongside her.

A tree topped the final hill. As she crested
the rise, the house came into full view. Kara bent low, recovering
her breath.

Kara straightened, mouth open, gazing at the
horrific scene before her. Orange flames wrapped the house and a
swirl of rising black smoke billowed from every window. What was
going on? Why was her home on fire?

Mother! Father!
Where were they?
Tongues of fire lapped among the smoke, but no one appeared in the
windows.

A strong urge to run toward the conflagration
swept over her. Her mind raced with questions, eyes stared
transfixed at the dancing demons of fire. But the memory of her
father screaming at her to run played again in her memory and kept
Kara rooted in place.

The sound of a horse’s whinny broke her
stare. She saw, to the side of the burning house watching from a
safe distance, three men dressed in silver and violet livery and
holding the reins of several horses. Two similarly dressed figures
held a third man between them. This man was on his knees, head
pulled back, forced to watch the inferno. Another man, dressed
similar to the riders, paced before the prisoner.

Why are King La’ard’s men at my home? And
who…
but before her mind could complete the thought, she
recognized the kneeling man.

Her heart seemed to stop.

“Patience is not a virtue I possess, baker
Kirt. King La’ard has instructed me to retrieve the piece of broken
mirror you stole.” Master Kreitan paced, his dark armor clinging to
him as if it were his soul.
Hissss… Hissss…
His boots singed
the grass as he walked, leaving faint burn marks in his wake.

Kreitan sneered in disgust. Captain of the
Witch Guard, and he was running a pathetic errand for the king
again. Whatever this shard of mirror was, it certainly seemed
important to the king. Perhaps he could turn finding it to his
advantage.

Wonder Woman Vol. 3: Iron by Brian Azzarello
On the Move by Pamela Britton
The Price of Politics by Woodward, Bob
The Holy City by Patrick McCabe
Thus Spoke Zarathustra by Friedrich Nietzsche, R. J. Hollingdale
Trickle Down Mindset: The Missing Element in Your Personal Success by Michal Stawicki
The Snow Kimono by Mark Henshaw
No Ordinary Love Story: Sequel to The Diary of a Submissive by Morgan, Sophie
A Knight In Cowboy Boots by Quint, Suzie
Slade's Feisty Mate (Saber Chronicles Book Two) by R.E. Butler