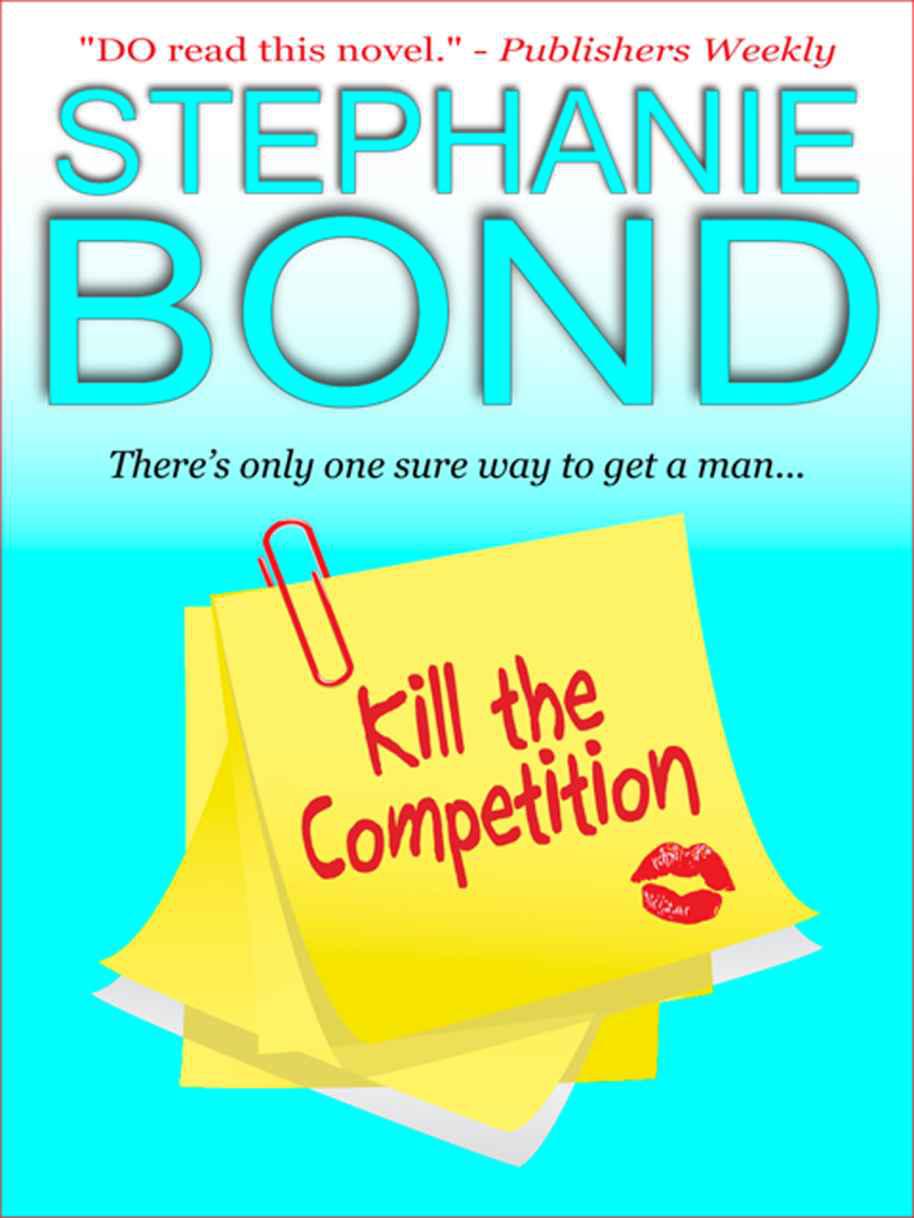 That's Belinda Hennessey's new philosophy in life, work, and love after
moving to Atlanta to escape a disastrous six-hour marriage. Now she has a killer
job, spunky carpooling gal-pals, and the velvety voice of a traffic helicopter
reporter to guide her on her way. She's even feeling lively enough to contribute
to the manual on relationships and men her friends are writing to kill time
during their commute.

But then a traffic mishap with a drop-dead gorgeous cop unleashes a series of
events that bolsters Belinda's new bad-girl attitude -- she gets a tune-up from
"Officer Goodbody," catches the eye of the throaty traffic reporter, and is
targeted for a big promotion. But before Belinda can say "corner office," a
coworker is murdered, and evidence points to a carpool conspiracy With a killer
on the loose, her friends at one another's throats, and two men offering
southern comfort, Belinda knows only one thing for certain: climbing to the top
can be murder on a girl.

There's one sure way to get to the top …

Belinda Hennessey opened the shower door and leaned out, hair dripping, her soapy ear piqued for the voice of the predominant man in her life—although granted, the fact that she'd never even met the guy was a tad on the pathetic side.

From the clock radio on the crowded vanity, a sexy, Southern-bred accent reeled into the room over the whir of helicopter blades. "Traffic is jammin' up on I-85 southbound below the I-285 junction due to a three-car accident in the rightmost lane. Southbound Peachtree Industrial and Buford Highway are feelin' the effect, so my advice is to hop over to Georgia 400 while it's still a speed limit ride, which won't be for long." He whistled low. "If you're comin' into Atlanta from the northeast this mornin', I hope you're not runnin' late. I'm Talkin' Tom Trainer for the MIXX 100 FM traffic report."

Oh, that voice.
Belinda shivered, then glanced at the time and swore softly. She yanked a towel around her, made wet tracks to the bedroom, and let the ho-hum carpet soak up most of the water dripping down her legs. With one hand she ran the towel over the rest of her while flipping through hangers in her closet. Her shoulder muscles still twinged from an "iron arms" session in the gym—a degrading experience she had allowed herself to be talked into in lieu of lunch a couple of days ago. According to a fitness report on the radio, now that she had entered her thirties, she was losing muscle mass at an alarming rate.

Yes indeed, it was a fine time to be single again.

When her fingers touched a knee-length gray jersey dress, she pulled out the garment and tossed it onto the unmade bed. An indignant yowl sounded from beneath the leopard print comforter, and Downey's black head appeared.

Downey blinked. The feline's morning disposition reminded her of the man who'd given her the cat, her ex, Vince Whittaker. She hesitated to refer to Vince as her ex
-husband,
since their marriage had lasted a mere six hours. Downey was the best thing to come out of that train wreck, despite her current slit-eyed disdain.

"I know—I shouldn't be late on my first day driving the carpool."

The shower was her downfall. This townhouse was the first place she'd ever lived in that had an adequate hot water heater, so she leaned under the spray every morning until her skin was just short of a good scald. The indulgence was heavenly, but the trade-off was hell.

With the agility of a hurdler, she leapt into underwear, pantyhose, dress, jacket, and pumps, then gave her unremarkable auburn hair a one-minute blast from a blow dryer. A touch of translucent powder, mascara, and lipstick would have to pass for makeup; her cheeks were still pink enough from the shower to skip the blush. There wasn't time to make the bed, although she knew she'd be plagued with thoughts of dropping dead before the day ended and her mother's
tsk, tsk
when her parents came to gather her personal effects.

"I knew this move to Atlanta so soon after the you-know-what was too much for her, Franklin."
(Her mother refused to make direct references to the reneged wedding.)
"Look, she didn't even make her bed—I heard on the
Today
show that untidiness is a sure sign of depression."

Little did her mother know, she didn't have time to indulge in a good cathartic bout of depression. Her new job was consuming every waking hour, and for that, she was eternally grateful... because the urge to wallow was so close to the surface. Especially today. Since opening her eyes to stare at the white fluted globe covering the light-bulb in her bedroom ceiling (over the past two months she'd grown to hate that globe), she hadn't been able to shake the sense of impending doom. The last time she'd felt this out of sorts had been on her wedding day.

She dropped an earring twice, poked it in as she jogged down the stairs to the foyer, then dashed into the kitchen to grab an instant breakfast drink from the fridge. Her briefcase sat open on the table, surrounded by accounting spreadsheets. She shoved the papers inside and slammed down the lid, catching her thumb and bruising the nail.

Gritting back a foul word, she checked Downey's water, knuckled the cat's regal pouting head, and managed to slide behind the wheel of her clover green Honda Civic just after 6:30 a.m., only five minutes late. But getting started a measly five minutes late in the Atlanta commute could mean the difference between arriving in time to prepare for her 8:30 a.m. meeting, and tearing into the meeting already in progress with murmured apologies to her scowling boss, Margo. And "tardy" wasn't the opinion she wanted the woman to take into her first performance evaluation, which was mere days away. She'd worked long hours for the Archer Furniture Company in the hopes of getting a raise that would put her on the same earning level of her previous financial position in Cincinnati.

She thought of the sliding balance in her savings account and sighed. Everything in Atlanta was more expensive than it was in Cincinnati. Carpooling was only one of the cost-saving measures she'd adopted since her impromptu move. If she could've gotten a refund on a gently worn wedding gown, she would own a couch—not to mention a television that worked more often than only when it rained. But seating for one was adequate for the time being, and since it was June and perennially sunny, she'd grown accustomed to listening to the radio. Besides, one of the girls in the carpool kept everyone abreast of television shows to help pass the long-suffering ride from suburbia into the city and the reverse trek at the end of the day. Living vicariously through the amorous women on
The Single Files
was a safe substitute for an actual social life—Belinda prayed the show would be renewed for the next decade or so.

As she backed out of the one-car garage in the early morning dusk, a horn blared. Her neighbor, Perry Ponytail, grinned and waved from his late model SUV in the driveway two doors down. The man's last name was actually a long word with few vowels that started with a P, but his distinctive hairstyle—a prematurely slick-bald crown combined with a sparse six-inch ponytail—conjured up a more memorable surname. The toothy construction worker had been trying to get her to go out with him since the day she'd moved in, but so far she had managed to outmaneuver him. Even if the man had been more appealing, to say that Vince had left a bad taste in her mouth would be an understatement of gigantic proportions.

She gave her neighbor a three-finger wave, then backed out onto the street and zipped past him before he could flag her down.

Meadow Gate subdivision (strangely, no meadow and no gate) was a pleasing blend of tasteful vinyl-siding homes, modern synthetic stucco town houses, and cheery faux-stone-patio homes. The agreeable landscape, however, was negated by the fact that residents were forced to turn left at the mouth of the entrance onto Peachtree Parkway, a zoomily busy north-south thoroughfare, without the benefit of a traffic light.

Stifling a groan, she chained onto the line of cars whose occupants waited for either a break in the traffic, a kind driver to yield, or the nerve to gun their way across three lanes of traffic. All of them, she knew, were cursing their real estate brokers and landlords for not warning them of this dangerous little aggravation. There seemed to be no good solution to the vehicle snarls created by the population explosion in Atlanta. Belinda herself had considered horseback before one of the women from the office had asked her last week to join their carpool.

And while she was grateful for the chance to get to know three of her female coworkers, and for their company to make the interminable commute more bearable, driving the carpool for the first time on the day she needed to arrive early for her boss's meeting smacked of poor planning. She blew her bangs in the air. Hormones? Nerves? Fear? Insecurity? For some reason her body was on heightened alert. Prickly, clumsy, jittery, susceptible. She stuck her throbbing thumb in her mouth and considered leaving it there for a good, comforting suck. With her life in such a state of disarray, she wasn't feeling very grown-up these days.

Courage Dares by Nancy Radke
There’s Always Tomorrow by Pam Weaver
At His Mercy by Tawny Taylor
Brock by Kathi S. Barton
The Darkest Child by Delores Phillips
Whitefire by Fern Michaels
Unbreakable: A Navy SEAL’s Way of Life by Thom Shea
Once Upon a Scandal by Julie Lemense
On Cringila Hill by Noel Beddoe
From the Dust Returned by Ray Bradbury