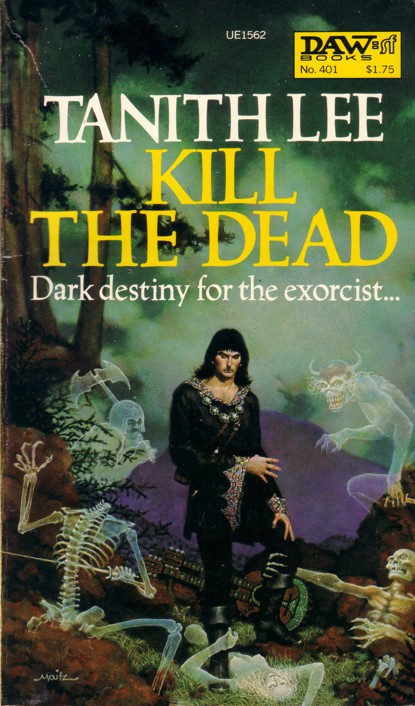 Out of the dusk he comes striding, the stranger, the man in black, inevitable as death itself: Parl Dro—Ghost Slayer.

Some have bought his services for gold, and some have blessed him for his work. But not everyone welcomes an exorcist who will remorselessly deprive them of their beloved dead.

Dro began his vocation at an early age. And now he will not be turned aside, no matter how you may threaten, curse or weep. He is seeking too the greatest stronghold of the deadalive: Ghyste Mortua, the ghost town in the mountains, and he means to destroy it. If he will face that, what use the pleas of the desperate sisters, Cilny and Ciddey, what use the rage of Myal, with his genius for music and his imperfect talent for crime?

Only one thing, it seems, motivates Parl Dro. His determination to kill the dead.

This is a work of fiction. All the characters and events portrayed in this book are fictitious, and any resemblance to real people, or events, is purely coincidental.

The right of Tanith Lee to be identified as the author of this work has been asserted by her in accordance with the Copyright, Design and Patents Act, 1988.

Parl Dro tore up the plank and his fingers thrust through the soft rot beneath and touched the single bone embedded there. It belonged to the ghost, when the ghost had been a man. Through the concrete essence of that bone, the ghost, unwilling to depart, had kept its hideous link with the condition of life. A hundred persons had since died because of it. It had exulted in their screams of terror and agony. It would have killed the rest of the world if it could.

Even as Dro raised the bone towards the jaws of his vice, the ghost was on him. Made corporeal by its long pseudo-existence, it had the energy to drag him down and fling him over.

The dead who lived, like the mirror image, right hand in reverse, tended to attack leftward or sinister. It occurred to Dro quite abruptly that the ghost had fastened its teeth and nails into the calf of his left leg, ripping and gnawing at him.

This book, which is partly at least about deceptions (both of others and oneself) has, perhaps not illogically, itself incurred a kind of deceptive myth. For what it’s worth, then, I shall try to set the record straight.

In the summer of 1977, a radio play of mine, the first of four bought by the BBC, was recorded and broadcast. For me this really was Heaven-on-wheels. I loved every moment of seeing/hearing it come to life, through the voices of such wonderful actors as Jill Balcon, Stephen Thorne, Elizabeth Bell, and Sean Barrett, not to mention incredible music composed by Christos Pittas, and gleaming direction by Richard Wortley. And needless to add, I loved every one of the subsequent productions, too. However, on the heels of the first play I received an invitation to write a TV script, for the by-then cult SF series
Blake’s Seven.
My delight at this
–
I had watched the show from its first episode
–
was not unmixed with fright. Where I had felt at home with the medium of radio from the start, TV was
quite
another country. Though my radio plays were far from unflawed, I’d had no fear of being unable to evoke the actual mental furniture required for their presentation, even placing my music cues with confidence. But, of course, I’d been avidly listening to radio drama from the age of six upward, while my family
–
poor as underpaid church mice
–
never even had access to a TV until I was twelve. And, despite the fact in those days TV was rich in marvellous drama
–
Chekhov, Shakespeare, Ibsen, Pinter were regularly staged, not to mention amazing things from Jack Rosenthal and, later, Alan Ayckbourn
–
I still felt I knew very little about the modus operandi of a
novice
TV writer’s task.

Having met the production people, however, who were both helpful and inspiring, and some of the actors
–
ditto
–
I accepted the commission and duly wrote
Sarcophagus.
And I have to say, once I got over my initial timidity, the script flowed, and indeed very little was altered for production. My intention from the start was to attempt to focus, in turn, on each of the characters (a possibility of my doing more scripts was mooted quite early). I aimed, at least slightly, to unravel two of the main characters in that first story: Cally, the telepath widowed of her people, and the devilish, clearly also messed-up Avon. I wanted to open them both out on the screen, and more than aided by the powerful acting of the cast, I think I managed it somewhat. (My
second episode,
Sand,
took on Servalan
–
a damaged psychopathic fiend held
in an exquisite form
–
for my money Jacqueline Pearce was and is one of the most beautiful women in the world. Long before Servalan, I had seen her act in classical roles, as well as the extraordinary (again cult) horror films
The Reptile
and
Plague of the Zombies.
I believe she is one of our great actors, mysteriously recently underused. It goes without saying she also brought the second script to vivid life.)

Actors are probably the people that I am most fascinated by, and certainly rank high for me among those I respect. Having met the cast of
B
lake’s Seven,
then seen them at work, and got to know some of them at least a little (Jacqueline remains, I am honoured to report, a friend), it was perhaps inevitable that at least one or two of them might get into future writing of mine.

I have to say, both before and since, I have often ‘employed’, as it were, actors in roles in my novels and short stories. To name but a few: Vivien Leigh (many, many times), Elizabeth Taylor, Gillian Anderson, Rutger Hauer, Oliver Cotton, and Dennis Franz. How lucky I am to see (for when I write I do see everything
very
clearly) these glamorous and brilliant people acting the roles I have visualized them into. Unpaid as well. But then I suppose they didn’t have to learn the lines, or travel to the frequently remote and/or perilous places they inhabit, while the book is in progress. My gratitude for the truly sublime, and sometimes electrifying motivation they have unknowingly given me, aside from my utter joy when watching them act out in the so-called Real world, is far beyond thanks. But I do thank them all, so much.

Paul Darrow then, unwitting at the time, stepped into the role of the main male character in
Kill the Dead.
A description of Parl Dro (a clue, too, is in the invented name—this is occasionally also obvious with other actors I have ‘written in’) reveals Mr. Darrow at the stage and era he then occupied. But here I must stress, for this is the erroneous myth which somehow attached itself to this novel, it is not Avon I am writing about. Indeed, to have done that would have been not only an infringement of
strict copyright, but also a
bloody cheek.
Although I had much enjoyed examining Avon’s character a little, inside the legitimate bounds of
Blake’s Seven,
I would not have dreamed of trying to reproduce him elsewhere. So, it is Paul Darrow the actor, who is acting
Dro
in these pages. A man damaged both physically and mentally by his bizarre and tortured trade, a man who, frankly would have, I think, earned both Avon’s contempt, and Avon’s complete horror. And in addition, to be quite fair, even Paul Darrow’s handsome appearance and manner of interpreting character underwent, during the book, endless changes. That usually happens. I think actually
only
Vivien Leigh, Elizabeth Taylor, and Jacqueline Pearce remained
exactly physically
like themselves throughout those several Lee novels they have adorned.

Meanwhile, I
did
write a play for Paul Darrow–my fourth for BBC–The
Silver Sky.
I even got my photo in the
Radio Times
for that one! The other part was for lovely Elizabeth Bell. Again, I was enormously lucky that they both agreed to do it. Their performances are gems, especially Elizabeth’s blend of courageous and sexy, tender femaleness, and Paul’s faultless rendition of that last, very demanding, monologue. (As ever, there was a great supporting cast, and glorious director—Kay Patrick.)

Incidentally, when I later told Paul Darrow (at a
Blake’s Seven
party) that I had had the sauce to recruit him to act Parl Dro, he was very nice about it, and laughed with some amusement. The few actors I
have
told have never been unkind. They laugh, or even seem interested.

The last misunderstanding that has added itself to
Kill the Dead
is that Michael Keating (Vila in
Blake’s
Seven) plays the part of Myal Lemyal. Sorry, he doesn’t. I believe
that
mix-up came about because I also wrote a play for Michael–
Darkness
, which the BBC didn’t want. It is a good play, and with more of the sort of imput producers and actors have always given me, it could, maybe, have been
very
good, but there. Meanwhile, I had compared
Kill the Dead’s
Myal to myself. Again, a clue is in the name –my all, etc: A talented idiot.

That then is the Truth about
KTD
’s relation to
Blake’s Seven.
I do myself think that something of the style–wisecracks, put-downs, even long areas of dialogue–that I used in the show, also inform the book. And I do think too that Paul’s ‘performance’ in the character of Dro, even if changing into a real and separate being–as all my characters seem to do, to me, in that parallel universe I am blessed to have access to–added immeasurably to the novel.

If curious enough, one might also look up another book of mine,
Sung in Shadow.
It is a wild re-telling, in a parallel Renascence, of
Romeo and Juliet.
He has a secondary starring role in that, one of the non-teenage figures. It’s a meaty part. He more than did it justice.

A handful of years back I wrote a monologue specifically for Jacqueline, and later one for Paul, as part of MJTV’s CD series
The Actor Speaks.
The disks are highly intriguing and entertaining, both for their frank interviews and their other examples of terrific drama written by actor-producer Mark Thompson. While for me, it’s particularly magical to hear both JP’s and PD’s (musical) voices rendering my words–at the touch of a button.

Writing is my life. It is among the best of all the best things for me. But those times when I’ve been fortunate enough to be interpreted by so many actors of such golden calibre, on radio, CD, TV, and film, I consider some of the most radiant events in my career.