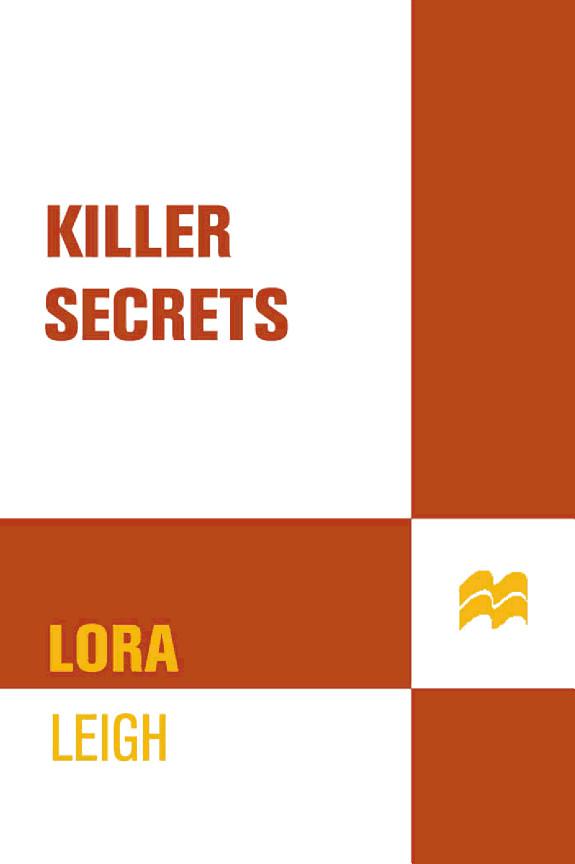 "Treachery and intrigue combine with blistering hot
sensuality in this chapter of Leigh's SEAL saga. The

title of this book is particularly apt, since many of the
characters are not what they seem, and betrayal can

have deadly consequences. Leigh's books can scorch the ink
off the page."

"An evocative and captivating read."

"A marvelous novel of suspense and raw passion."

"Lora Leigh ignites the fire . . . with steamy heat
added to a story that makes you cheer and even tear

This is a work of fiction. All of the characters,
organizations, and events portrayed in this novel are either

products of the author's imagination or are used
fictitiously.

All rights reserved. No part of this book may be used or
reproduced in any manner whatsoever without

written permission except in the case of brief quotations
embodied in critical articles or reviews. For

To all my
co-conspirators,

I couldn't do it
without you.

SLIPPING INTO THE ICU UNITof the private military hospital
wasn't an easy task. It would be

considered insane from most men's point of view. Even a
SEAL's. But that was exactly what former

Lieutenant Ian Richards of the Navy SEALs did.

Under the cover of night, he managed to slip into the
hospital, make his way to the ICU, and wait until

the guard at Nathan Malone's door dozed off before he slipped
in, in the guise of an orderly.

His first sight of his friend nearly stole his breath.

Sweet Jesus. Nathan was in so many damned casts and wrapped
in so many bandages he looked more

like a mummy than a man. But it was a far sight easier on
the eyes than the naked, ravaged SEAL they

had dragged out of Fuentes's compound four months before.

Tortured, beaten, sliced and diced. His face had been so
disfigured it was hard to tell he was human, let

alone the friend Ian had known for the better part of his life.

How the hell Nathan had survived the nineteen months in
Fuentes's care, Ian couldn't even imagine.

to rape the women brought to him, Nathan had lived in hell.
The reports they had gathered indicated he

had never taken one of the women locked in the cells with
him, but the doctors and psychologists

working with him said he might never recover from the
amount of drugs pumped into his system.

Ian knew better. Nathan was strong. Too damned strong to
let Fuentes win like this. But he had to be

Even after the months Ian had been away, been considered a
betrayer, a Judas to his friends, and

marked as a deserter by the U.S. government, Ian had had to
return to assure himself Nathan would

Ian moved to the bed, sliding between it and the curtain
that had been pushed back to allow the guards

to see all but a very small section of the area. Right by
Nathan's head. His covered, wrapped head.

"Damn, buddy, do you think they have you wrapped up
tight enough?" he asked his friend, knowing

Nathan couldn't hear him. Wishing he could.

Hell, somehow he had gotten used to being on the inside of
a team, rather than fighting alone to survive.

He had gotten used to the men he fought with, had grown to
trust them, only to learn at the end of it, he

was fighting alone once again.

Long ago, Nathan and his family had saved Ian and his
mother's life. On a cold desert night, with only his

screams of rage surrounding him, a boy and his father had
found him, saved him and his dying mother,

and given Ian a friendship he had never known before that.

And now, when his friend awoke, he would believe that
friendship had been betrayed.

He grimaced at the thought of it, his jaw tightening in
rage at the situation he had been forced into.

Because of blood. Because sometimes, a man could do nothing
about where he came from, he could

only control where he went. And where Ian was heading,
Nathan or Durango team couldn't go.

Ian could only go alone.

"We had a wild ride huh, bro," he whispered, his
voice nearly silent, but the breath of the words easing a

Nathan was unconscious, comatose, but somehow, knowing the
words were whispering past his lips

eased Ian. Maybe, just maybe, his friend would hear a part
of them, know, understand, that beneath the

near silent whisper was the truth. It had been a wild ride,
and now it was over.

He reached out, let his fingers touch his friend's shoulder
as a grin tugged at his lips.

Nathan "Irish" Malone. All smiles and wild blue
eyes, a man who as a boy had saved his life.

"Hell of a way to repay you," he breathed out
softly. "But what's that old saying? Blood will tell?"

That was what Nathan used to say. When the chips were down,
when everything was going from sugar

to shit, he would flash that reckless smile, look at Ian,
and laugh in his face. "Blood will tell, ole son." And

they would go out fighting hell-for-leather because Ian's
blood might be tainted with evil, but his heart

was one hundred percent red-blooded American Navy Seal.
That was Nathan's belief in him. What

would he believe when he awoke? Ian wondered.

"Get strong, Irish," he said then. "You
always were the wild card of the group, show 'em you're tougher,

stronger than what put you here. Then look me up."

He tightened his fingers on his friend's shoulder, then
slowly eased the grip, his head lifting as the hairs

along the nape of his neck stood up in warning.

most subtle flexing of muscle.

His teeth flashed in a grin as his weapon dropped from the
sleeve of his jacket to his palm. And it didn't

whisper. There was no catch of metal over flesh. It was
silent. Still.

There were some people that a man just had to give credit
for trying. This was one of them. He knew

where the body stood now, that subtle shift had been all he
needed. He knew where and he knew who.

Instinct and something more. A part of a man that knew a
woman in a way that made no sense. An

underlying certainty, as though a part of him knew a part
of her no matter where they found each other.

No matter the disguise she used.

Of course, it didn't help her cause that Ian had recognized
something about her that no one else had. A

delicate turn of pretty ears, a particular slant and curve
of pretty ear-lobes. If a man wanted to take the

time to memorize every shape and turn of her face as Ian
had before that first mission where he met her,

then he would have seen it.

Her picture had been given to them before a particular
mission she was working. She wore one of many

disguises; they had been warned to watch out for a woman
who never looked the same. Ian had

managed to identify the one thing that never changed
though. Those pretty ears. That and a wicked,

teasing glint in her eyes, no matter their color.

promise her eyes had made during the weeks they had put in
together on a past mission.

He slid past the bathroom door, careful to let the sleeve
of his jacket slide across the wall, to alert her to

the fact that he was leaving the room.

He let the door open, stepped out, then grimaced and shook
his head as the guard glanced toward him,

as though he had forgotten something. He held up a finger
with abashed embarrassment then stepped

The door swished closed. And he waited.

He was patient. She was smart.

He would have smiled, but so much as a twitch would be
enough to warn her he was there. She was as

smooth as fine whisky, as adept at her job as he was at
his.

So he waited. And the patience paid off. The bathroom door
edged open, and sure as hell, there she

was. Like the sun edging over the mountain. Like a clear
breeze easing through the stench he could

sometimes feel gathering around him.

When he moved, he realized he was almost too slow. Or she
was almost that fast. His hand went over

her lips, his body braced, pushing hers against the wall
face-first, his free hand pressing the barrel of his

weapon against her neck warningly.

She didn't make a sound. Damn her. She didn't even fight
him. She relaxed into his body instead. Her

rounded buttocks cushioned his hips, her shoulders curved
against the wall, and she bared the slender

line of her neck as his lips pressed close.

Hair that should have been long and black was cut close and
blond. Gray eyes were hazel, clear silky

flesh had a coarse appearance. There was nothing of the
woman he had seen on his last mission, or the

mission he had found her on before that. The Chameleon was
as ever-changing as a woman's emotions.

"I like the black hair better," he whispered at
her ear. "And the gray eyes. Natural, weren't they, sugar?"

He rubbed his nose against the ultrasoft lobe of her ear.

Her tongue flicked against his palm, almost surprising him,
almost making him drop his guard. He

chuckled softly at her ear instead and felt the smile
against his hand.

"You shouldn't be here." He laid his forehead
against her shoulder. "A man should be able to say

goodbye to a buddy without an audience, don't you
think?"

She looked back at him, hazel eyes cool. There was no fear
there. No anger. No impatience. But

beneath the calculating chill there was a hidden flame. One
he never failed to respond to.

"Wrong time, wrong place." He stared back at her
as she watched him over her shoulder. "Wrong life."

He let himself experience the feel of her for just a few
seconds more, long enough to let the regret in his

gaze telegraph to hers. Long enough to watch the flicker of
indecision in her eyes. That second where he

knew she was weighing her options and her escape.

A deft move of his hands, just the right pressure, and a
second later she slumped against him, thick

lashes drifting over her eyes as darkness closed over her
mind.

Ian swung her in his arms, lifted her from the floor, and
stepped to the chair on the other side of the

Dividing the Spoils: The War for Alexander the Great's Empire by Robin Waterfield
Leximandra Reports, and other tales by Charlotte E. English
Menaced Assassin by Joe Gores
Danny Baker Record Breaker (5): The World's Itchiest Pants by Steve Hartley
Playing Doctor: A Central West End Story by Cahoon, Lynn
My Struggle: Book One by Karl Knausgaard
I Can't Believe He Did Us Both! (Kari's Lessons) by Lane, Lucinda, Zara, Cassandra
Surrender by Marina Anderson
Once Upon a Tartan by Grace Burrowes
Refuge by Michael Tolkien