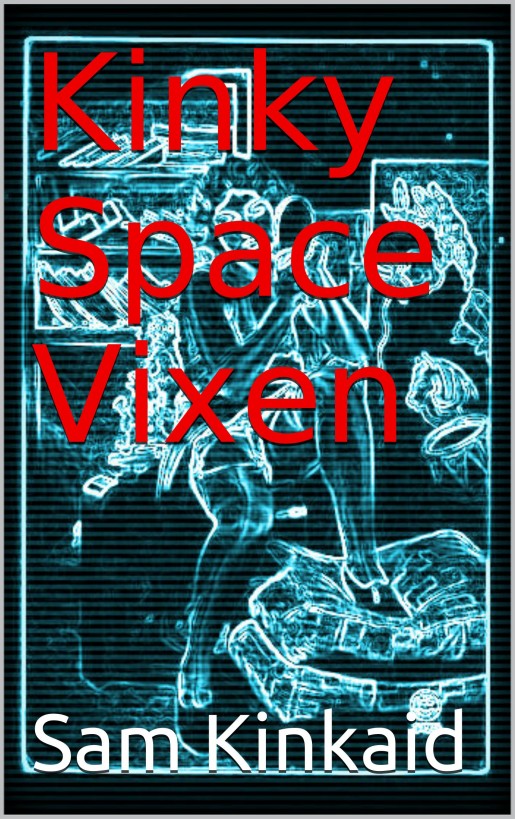 This ebook is licensed for your personal enjoyment only. This
ebook may not be re-sold or given away to other people. If you
would like to share this book with another person, please purchase
an additional copy for each recipient. If you’re reading this book
and did not purchase it, or it was not purchased for your use only,
then please return to Smashwords.com or your favorite retailer and
purchase your own copy. Thank you for respecting the hard work of
this author.

ALL CHARACTERS
ARE OVER EIGHTEEN

The Class Four
Freight Vessel
Vixen VI
drifted languidly in the emptiness
of space, three days from its destination planet. In the huge
storage compartment at the back the two thousand tonnes of valuable
orestone was packed in tightly whilst in the pilot’s deck at the
front a dim light was emanating from the windows. The freight
vessel was fifty years old, positively ancient for a craft of this
class but it had been well restored with modern features, and was
secure and safe.

Aevie loved
being the navigator on the
Vixen VI.
She loved its age and
comfort and she especially loved the fact it required only a crew
of two: herself and the pilot, Joe, who also happened to be her
lover. She was twenty years old, slightly taller than average
height and possessed of long legs leading up to a full and firm
ass. Her breasts were large but not ridiculously so. Her face was
determined yet somehow still friendly. Her nose was slightly
upturned and button like, her eyes clear, wide and deep brown,
always questioning. Her hair was long and dark, coming down to just
above her waist, tonight she had tied it in a bun so it did not
distract her whilst she was playing but a few stray strands still
cascaded down the sides of her face which she was required to brush
back every now and again.

Aevie looked up
at the old fashioned analogue clock above her and saw that it was
three in the morning Venetian time, not that this really meant
anything. Here in deep space the concepts of night and say were
forgotten. You got up and slept when you chose. The ship was on
cruise control, on course and there was nothing much to do. At this
present moment in time there was nothing left to do except relax
and this was exactly what she was doing. Her feet were pressed up
against the front window of the cockpit and her chair was fully
reclined. She was wearing a loose fitting t-shirt that belong to
her boyfriend and a pair of white comfortable cotton knickers and
she was playing an old style computer game on the ship’s monitor.
Every now and again, between the game’s cut-scenes, she would raise
her head and stare idly out into infinity. And hour passed by and
Aevie found herself getting restless. She had an idea in her head
but she couldn’t quite bring herself to put it into practice,
although the very thought of it was making her wet and every now
and again her right hand would stray from the controls and move
down to absent-mindedly brush against her breasts or thighs.

It was no use.
She just couldn’t concentrate. She saved the game at a convenient
point, stretched and got up, glancing at her reflection in the
cockpit window and deciding she was perfectly gorgeous enough for
what she had in mind.
Joe was turned over with the blankets over him, snoozing away. A
minor problem with the ship’s computer systems had kept Joe up for
several hours straight and so now he was catching up on his sleep.
Aevie stood and watched him for a while, leaning against the
doorway of their bedroom. Joe six months older than she was, twenty
one years old whilst she was still just about twenty. He was
possessed of rich brown hair with a long fringe brushed back over
his head, a naturally cheerful face and deep brown eyes. They had
been in the same class at the flight academy which is where they
had fallen in love. She smiled as she watched him sleeping and
thought about the charmed life they both led. Theirs was not the
largest freight ship in the Confederation but it made them a good
living. Right now they were on their way to the planet Dildone
where they were due to drop off a large consignment of orestone.
After being paid they would have more than enough left over to be
able to afford for Joe to sit his senior’s pilot’s licence, which
qualified him to man the larger freight ships. Joe had been
studying for his exams for months now and Aevie was certain he was
going to pass with flying colours, although she still liked to test
him.