Knights of de Ware 01 - My Champion 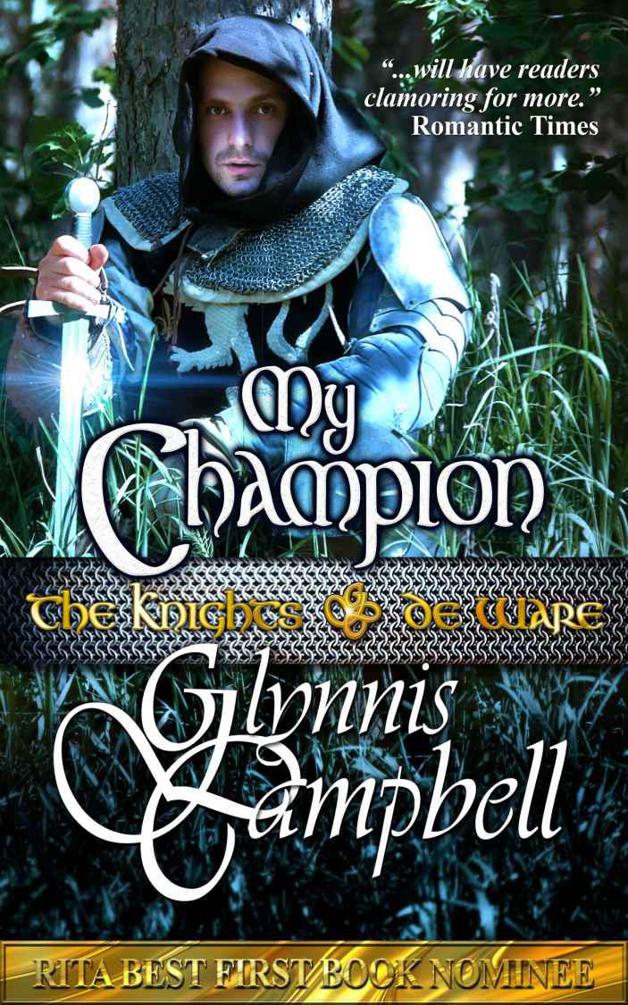 Table of Contents
Sealed with a Kiss…

He lifted one hand to tangle it in her hair.

The beggar’s lips came down on hers before she could finish. His kiss was deep, demanding, and his chin rough and foreign against her cheek. For a moment she was too stunned to resist. Then her head cleared, and she began to struggle in his confining embrace. She tried to scream, but his mouth cut off the sound. This couldn’t be happening, she thought distantly.

Not with a peasant.

Not her first kiss.

She pushed against the firm wall of his chest and tried to twist in his arms, but he held her fast. The kiss seemed to last forever. To her growing dismay, her breath quickened, and her heart began to beat erratically against her throat at the place where his thumb rested. Then, all at once, he pulled back. For one instant, as she looked up into his smoky eyes, he looked as dazed as she felt.

Nominated for RITA Best First Book Award
“Sparkles with humor, vivid imagery, and charming characters. A delightful book!”
—Katherine Sutcliffe
“Glynnis Campbell is a gifted new voice, and
My Champion
is a breathtaking story!”
—Tanya Anne Crosby
“From the first vivid word, Glynnis Campbell immerses the reader deep in medieval England, creating characters rich with texture and emotion…vibrant.”
—Amy J. Fetzer
“Ms. Campbell’s debut novel propels readers into the fourteenth century with vivid descriptions and details of the life of the commoner. The nonstop action, strong plot, and fascinating characters draw you deeply into the story. As the first in a trilogy about the de Ware brothers,
My Champion
will have readers clamoring for more.”
—Romantic Times
“Well-written, with a fine sense of detail,
My Champion
is a sexy, lighthearted romp of a story.”
—Rexanne Becnel

This work is a work of fiction. Names, places, characters and incidents are the product of the author’s imagination or are used fictitiously. Any resemblance to actual events, locales or persons, living or dead, is coincidental.
Copyright © 2000 by Glynnis Campbell
E-book Copyright © 2012 by Glynnis Campbell
All rights reserved. No part of this book may be reproduced in any form or by any electronic or mechanical means, including information storage and retrieval systems, without permission in writing from the author, except by a reviewer who may quote brief passages in a review.
Book design and illustration by Richard Campbell
Glynnis Campbell – Publisher
P. O. Box 341144
Arleta, California 91331
Contact:[email protected]

For Blake, who opened the door,
Lynette, who pushed me through it,
and Richard, who held it wide

Acknowledgments
With special thanks
To two of the loveliest ladies
in the world,
Helen and Cindy,
And my sisters at OCC/RWA

“But before young Perceval left his home to seek King Arthur, his mother said to him, ‘There are three things you must remember if you’re to be a proper knight.’”

Lady Alyce had the boys’ attention now. The three of them hung on her every word as they sat at her feet, listening to the tale of Sir Perceval. At their age, there was nothing they wanted more than to be knights. After all, it was the de Ware legacy. Their family was rich with great warriors and high adventure.

“I wonder,” she mused, eyeing the lads in turn, “if you can guess what those three things are.”

Garth, the youngest and her only son by birth, screwed up his four-year-old brow and narrowed his gray-green eyes. “Wash your stockings before the Sabbath.”

Holden, the middle boy, snickered, earning an elbow in the ribs from his scowling older brother.

Lady Alyce bit her lip, determined not to laugh. “Well, aye, Garth, that is very important. Can you think of anything else?”

All three frowned then, their bright little minds busy. Deep in thought, they didn’t hear their father come in. Lord James leaned against the doorway with his arms folded and his eyes twinkling. He flashed Alyce that smile that always set her heart a-flutter and made her grateful that she’d been able to ease the pain of his first wife’s death, that the handsome Wolf de Ware had married her.

She would have welcomed him to sit on the bench beside her, but he cautioned her to silence, content to listen to his sons in secret.

Holden was the first to look up at her. “I know.”

She smiled wistfully back. The path of life wouldn’t be easy for Holden. His mother had died giving birth to him. His past was stained, and his future was uncertain. Duncan, as the oldest, would inherit de Ware Castle. Her youngest, Garth, would likely pursue the clergy. Middle sons like Holden had nothing handed to them. Everything they gained they earned. But if anyone could fight his way to the top, it was Holden, with his wild ways and those stormy green eyes that could glare down the most formidable foe.

“A knight must protect ladies…” he said.

“Holden!” she interrupted with a scolding shake of her head. “Aye, a knight must protect ladies. What else?”

Garth squirmed and glanced at his older siblings, clearly reluctant to make any more mistakes. He so admired his half-brothers, and Alyce dreaded the time when he might be compared less than favorably to them. Duncan and Holden had inherited their father’s stature and striking looks, and already they demonstrated prowess with wooden swords. But Garth was a beautiful child in his own right, possessing his unique strength by way of intelligence and a depth of character unusual in one so young.

“A knight must…” he began tentatively.

“A knight must obey God.”

“Excellent!” She clapped her hands together. “A knight must always keep the Holy Church in his heart. Ah, what brilliant lads you are.”

They all turned to Duncan then. Clearly, a burden lay on the oldest sibling’s shoulders. He was a handsome youth of eight years, with his father’s raven-black hair and eyes as bright as sapphires. His charming wit and natural warmth made him fast friends with everyone. But sometimes Alyce fretted that he might never adapt his dreamy idealism to the harsh realities of the world.

“Hmm, a knight…must…” Duncan’s lips slowly curved into a mirror image of his father’s smile, and the spark in his eyes told her he was up to some mischief.

He cleared his throat and began very dramatically. “A knight must vanquish dragons and save damsels in distress…”

Holden smirked, and Garth giggled. They instantly recognized the meter of the verses Duncan was always inventing.

“And kiss his lady’s hand…” The boys cringed in revulsion. “And let his father win at chess!”

His brothers tumbled with laughter now, and even Alyce had to grin.

Then Duncan’s eyes gentled into the serious gaze he would retain as a young man, and he continued thoughtfully. “A knight must save his fellow man from pain and poverty, for a noble knight, in thought and deed, a champion must be.”

Alyce and the boys cheered and applauded his clever verse. But beyond them, Alyce caught a glimpse of her husband, still standing in the doorway, his arms now unfolded, his smile gone. He stood tall and silent, and for a moment, she worried that James didn’t approve of his son’s levity. But then she noticed the trembling of his chin, the mistiness of his eyes. Bless him, he wasn’t angry. He was proud, proud as a father could be, of the little wolf cubs they’d reared together.

She gave him her own watery smile. Sooner than they imagined, the boys would be grown, with ladies and children and homes of their own. They’d live and love and hurt and mend and wind their way down life’s path as young men with promise in their eyes, fire in their veins, and love in their hearts. And she couldn’t help but wonder what fine adventures the future held for the Wolves de Ware…

Duncan de Ware took a refreshing breath of cool, salty air and glanced toward the sea, over the heads of the people who schooled like herring at the Dorwich dock. The crowd didn’t bother him. In fact, he liked the lively chaos.

Sailors swarmed down the gangplanks of grand vessels. Little boys darted past him toward the crates of newly arrived goods, guessing excitedly at their contents. Cats roamed the walkways for discarded bits of fish. At the farthest edge of the pier, merchants flung orders like gauntlets, daring the dockworkers to let harm come to their precious wares.

A number of foreign merchants had arrived by ship to sell their goods at the spring fair and perhaps continue west to London. Among the throng were serfs of Duncan’s father, earning a spare coin here and there by selling their home-brewed ale or freshly dug leeks to the hungry travelers. But a few of those strolling along the wharf were knaves, and a few were troublemakers, like the brash guildswoman for whom Duncan and his three companions kept watch.

Some foolhardy wench had filed and won letters of marque from the king. Since she’d had goods stolen from her by the Spanish, the letters granted her the right to collect compensation from any Spanish ship in port. Consequently, early this morn, the panicked harbormaster had sent word to Lord James that trouble was brewing at the dock, trouble that required a man skilled with a sword. Duncan had naturally obliged.

Letters of marque were a messy affair. No ship’s captain liked to be held responsible for the underhanded business practices of his countrymen simply because they sailed under the same flag. And if this guildswoman had an ounce of sense, she’d hike up her skirts and run for the hills when she saw which captain she was about to engage.

“You’re certain the harbormaster said ‘letters of marque’?” muttered Robert, Duncan’s oldest friend and constant companion. He nodded toward an unsavory bunch of recent arrivals. “Not something else? Perhaps ‘debtors disembark’?”

Duncan smirked. He stared past the hordes of milling strangers toward the moored vessels that creaked slowly on the gentle current like complaining old women. Then he saw it, just as the harbormaster had said—the
Corona Negra
, the ship of the infamous El Gallo, its Spanish flag flapping in the breeze. And swaggering along the dock was the unmistakable villain himself.

Duncan’s brother Holden stiffened. “Filthy bastards,” he growled, his emerald eyes darkening. Holden had a history with another Spaniard of ill repute, a vicious woman-killer. And while Duncan couldn’t condone his brother’s blind hatred of all things Spanish, he could understand it.