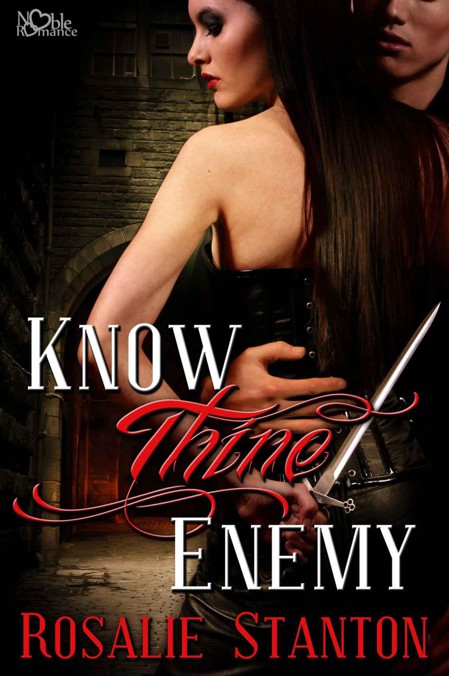 This book may not be reproduced or used in whole or in part by any existing means without written permission from the publisher. Contact Noble Romance Publishing, LLC at PO Box 467423, Atlanta, GA 31146.

This book is a work of fiction and any resemblance to persons, living or dead, or actual events is purely coincidental. The characters are products of the author's imagination and used fictitiously.

First, thanks go to Sarah Hethmon and Steven George for helping determine what C.R.O.S.S stood for. Thank you to my amazing editor, Bonnie Walker, for providing this book with the polish it really deserved. Thank you, Casey Harris, for being my ear to the ground. And I am forever indebted to Elaina Lee for fitting the book with the perfect cover. All of you are invaluable to me. Thank you.

I also owe the world to Nikki London, who kept assuring me I didn't suck, and to J.A. Saare and Madelyn Ford for being awesome crit-partners.

This book could not have been completed without the constant cheerleading and support from Sarah Ballance. Thank you for everything.

Hallowed ground felt no different from regular ground. He didn
't know why that always surprised him.

He shouldn
't have come here, but he couldn't keep away. He never could. Nearly ten years had passed since Caroline's death, and every year he made a pilgrimage to her graveside. It was fitting. It seemed right, as though this one act of humanity might keep him alive where it counted.

However, s
taring at her stone proved nothing. It hadn't proved anything last year either. Death had a funny way of putting things in perspective. In the end, she was no different from the millions who came before her.

Ryker sighed and knelt beside the small plot of earth. She wasn't here. She wasn't anywhere. Caroline Prentiss no longer existed. Her body had wasted away under the burn of an unforgiving sun. That much had been his doing. He'd taken her precious rest away from her for the hope of a reality she couldn't bear. Yet the headstone remained, as it would until the winds of time worried it away. According to anyone who lived in Natchez, Caroline rested here. She had been buried here two days after the fever took her, and here she would stay.

Ryker knew the truth. To his knowledge, he was the only one who did.

"Sweets to the sweet," he murmured.

The lilies in his hand had wilted, but he supposed the thought still mattered. Caroline had loved lilies.

A
long shudder raced through his body as his eyes dragged over the engraving. There was a familiar scent on the wind tonight—an achingly familiar scent. One he would have known anywhere yet hadn't encountered in years.

He
wasn't alone anymore. Perhaps he wasn't the only one who knew her secret after all.

Years had passed since his enhanced senses last took in Michael Prentiss
's scent, yet time had done little to erode the memory. Michael's presence made coming here more dangerous, but Ryker wasn't one to sacrifice ground or tiptoe around confrontation. Caroline might not have been Ryker's beloved sister, but she had been his friend, and a cousin by marriage. He had every right to pay her homage.

The fact he was a Yankee, raised by an abolitionist mother, was merely salt in the wound.

Ryker drew himself upright, still looking at the grave. "I was wondering when to expect you."

He turned around, and their gazes met.

The passing years had wreaked havoc on his memory. Michael looked nothing like Ryker recalled, and yet he would have known him anywhere. When they'd been younger, Michael had exuded buoyancy and charm, enjoying three brief engagements and more than his share of seedy scandals. He was broad-shouldered and had seemingly towered over Ryker in life, though now Ryker realized the height difference was only an inch or two. Michael's once groomed chestnut hair now caressed his shoulders, ratty and unkempt. His eyes no longer sparkled. Rather, they reflected a deadness Ryker knew intimately.

"
And I knew just when to expect you, Niles," Michael said softly.

An instinctive growl rumbled through Ryker
's throat. He really hated that name.

"
People are superstitious, are they not?" his cousin continued. "Every year, they say. Every year on her birthday, the man in black appears. I thought it a ghost story until two years ago. Do you remember, Niles? You walked right past me and didn't say a word."

He snorted.
"I turned away a beggar. Was that you?"

If Michael craved an argument, he
'd get one. Ryker refused to apologize for things over which he'd already bled.

"
Now that you mention it, I do remember smelling something foul."

"
You speak of filth? That's rich." Michael broke off with a sharp laugh. "Tell me, do you cry for her?"

Ryker inhaled deeply, noting the slight swagger in his cousin
's step, as well as the pervasive scent of liquor on his breath. It appeared he'd been Under-the-Hill tonight, though, if rumor had any weight, Michael had not uprooted himself from his barstool since coming home from war. Ryker certainly didn't call Natchez home, but he had a connection or two he occasionally called upon for updates, and the bulk of what he heard was depressing.

Despite his abolitionist parents, he and Michael had been friends once. Good friends.
They had been bunkmates at West Point, and, though they found themselves on opposing sides of the battlefield, they had never talked politics over the dinner table. They had too much respect for each other and their families to let the war divide them.

Caroline had changed that. They hadn
't exchanged a word since before Ryker's mortal death, but, in meeting his cousin's eyes tonight, he knew. He understood.

It
wasn't a lie, but close enough to make him uncomfortable.

The drunkard staggered forward another few feet.
"Didn't you?"

The remark seemed to anger Michael more than a
physical blow. In seconds, the drunkard was practically at Ryker's chest, puffing large, whisky-scented breaths into his face.

"
I would've been, dammit," he swore stupidly. "I didn't hear a word after what happened at Little Round Top. Not a
word.
And when I arrived home, no one came near me. Thought I was cursed, they did. No, I had to hear from a goddamned
darky.
"

"
My own sister, Niles! And Mama . . . do you have any blessed clue what sort of homecoming I had? Everyone knew.
Everyone
knew. I find a house deserted and the family I'd left—"

"
I know what happened."

"
Not out of choice," Ryker replied, his voice tempered.

"
You took advantage of our hospitality."

"
I took advantage of the fact that I had family nearby, yes. A similar advantage you enjoyed after Gettysburg."

"
I had the decency to leave your Yankee family alive."

"
The fever doesn't discriminate when it takes victims. I thought you'd know that better than anyone."

Michael snorted, though
he looked wild. Were Ryker any other man, he might be worried.

However, he wasn
't any other man. Not anymore.

"
You brought the fever with you into a home with a sickly child."

"
An invitation you extended. An invitation we made to each other. Did taking Vicksburg change things so radically?"

Ryker didn
't respond. Engaging the unstable drunk was a waste of time, and he'd entertained Michael enough for one evening. Sometime when his cousin's expression wasn't fogged, he might try again. Eternity was long damn time, especially when spent alone.

"
Every year you come here," Michael said, stumbling. "If you had nothing to do with it, why?"

"
So was Mama. Don't see you hovering over her grave, do I?"

Ryker wrestled with a wince and won. That much was true, loathe as he was to admit it. He hadn
't braved Mildred Prentiss's grave once these last ten years. He almost expected to find his aunt hovering above the place where her body lay, a reproachful look on her face.

"
She was different," he said.

The words lent him pause. Small town talk was one thing, but true insight into the creatures that stalked the night was another. Not many people spoke of the walking dead so seriously, so casually, whether inebriated or cold sober. Michael might think he knew what he was dealing with, but Ryker knew better.

At least he thought he did.

"
I'm not talking about the war, and you know it. I know what you are. I hear them talking. Down there." Michael pointed vaguely in the direction of the Hill. "I hear what they saw. What they talk about. What they say. Little towns don't lie, do they?"

"
Is gossip really so reliable these days?"

"
Howell Clemmons swears he killed you outside a brothel ten years ago. Stuck a blade right into your chest. You sputtered something about Maggie and collapsed against the wall and died."

"
I'm no fool, Niles. I saw it—things that'd make your blood run cold. After Little Round Top, I heard them. Sneaking around the hospitals, drinking others like leeches. Men who were in for amputation would be gone the next day, body and all. Nurses didn't know what to think." Michael swayed drunkenly but somehow managed to maintain balance. "One came after me one night there towards the end. Looked like a man. Spoke like one. But he wasn't a man. Not a man."

Ryker nodded. Ten years off the battlefield had taught him to respect the haunted look that befell veterans
' faces when they remembered. When their mind took them back to a grassy plain saturated in the blood of its soldiers. Yes, many vampires had scavenged the field hospitals in search of a quick, easy meal. Once or twice, when Ryker hadn't eaten in weeks and feared another step might be his last, he'd been among them. The act shamed him, but he understood the need for survival better than anyone.

Better than Michael could ever imagine.

A few seconds passed before Michael snapped back to reality. He blinked, his angry gaze finding Ryker's again.