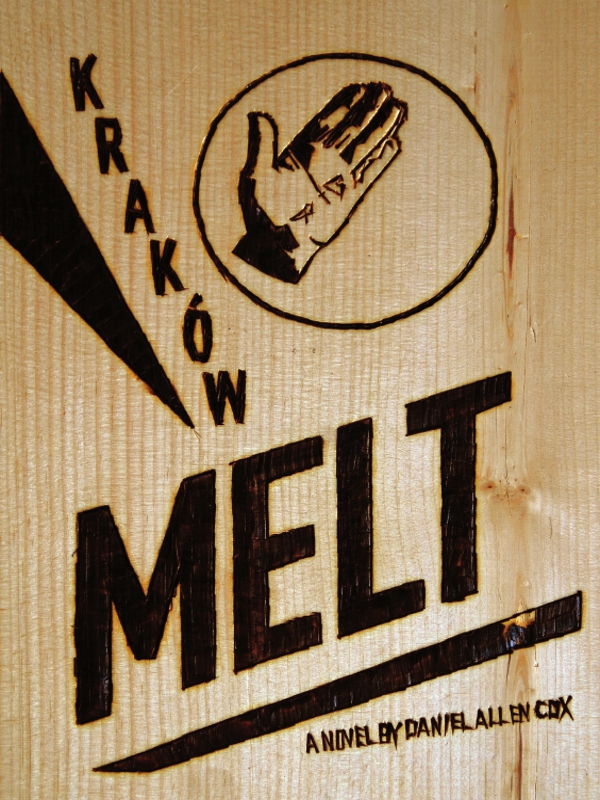 “Strange, provocative, and daring: all adjectives that fit Daniel Allen Cox’s work. In
Krakow Melt
, the writer gets stranger, more provocative, and more daring. Best of all, he’s given us a novel that’s both thrilling and fun to read.”
—Scott Heim, author of
Mysterious Skin
and
We Disappear

“I’ve been a fan of Daniel Allen Cox’s writing for some time, and in
Krakow Melt
the wit, punch, and sexual heat of
Shuck
return, revved up even more. As we read, we slip into a free zone of writing, almost as if the boundaries of the page had themselves slipped away and we were free to wander through Eastern Europe like natives, with the haunted and nomadic gaze of those on whom history has given up. Cox brings us a story of struggle, defeat, liberation, and love that I will never forget.”
—Kevin Killian, author of
Spreadeagle
and
Impossible Princess

“
Krakow Melt
is Syd Barrett crossed with the Polish queer nation, a rollicking and heart-pounding urban jump through some grim realities and fine prose stylings.”
—Zoe Whittall, author of
Bottle Rocket Hearts
and
Holding Still For As Long As
Possible

All rights reserved. No part of this book may be reproduced or used in any form by any means—graphic, electronic, or mechanical—without the prior written permission of the publisher, except by a reviewer, who may use brief excerpts in a review, or in the case of photocopying in Canada, a license from Access Copyright.

The publisher gratefully acknowledges the support of the Canada Council for the Arts and the British Columbia Arts Council for its publishing program, and the Government of Canada through the Book Publishing Industry Development Program and the Government of British Columbia through the Book Publishing Tax Credit Program for its publishing activities.

This is a work of fiction. Any resemblance of characters to persons either living or deceased is purely coincidental.

Printed and bound in Canada on 100% post-consumer recycled paper

and for those who can still smell the fire

Kraków is crows. Big, floppy ones. I don’t live in the city centre but in Nowa Huta, a suburb a few kilometres east. We can still hear them squawking from so far away, yammering on about the histories. I do a bit of that myself.

Nowa Huta was originally designed without a church. I love it for other reasons, too.

The Central Square explodes into a grid of side streets and tributaries lined with giant cement apartment blocks. It looks better than it sounds; this is the best of Soviet and Renaissance design, melded together. There used to be a statue of Vladimir Lenin in the Plac Centralny, but it was vandalized to hell. The Soviets should have remodelled it to make the fellow a smidge more popular. Perhaps a pose for the ages: entwined naked with Leonardo da Vinci, giving each other looks that say, “Four hundred years couldn’t keep us apart. Can you believe it? Give me a kiss.”

Didn’t anyone think to tell the Soviets that if they wanted to engineer the human soul, they should start with the body?

In the Osiedle Sportowe housing complex on Ignacego Mo

cickiego Street, where I live, there are industrial smoke detectors on every floor. Smart. The Stalinists didn’t want fires in the workers’ paradise— fire, historically, has led to even greater trouble—so they planted them everywhere, like landmines. These hidden screamers catch Pani Laszkiewicz every time she goes for a smoke in the stairwell. The building fire alarm rings and a whole eastern bloc of cranky neighbours file past her. Some of these reluctant evacuees spit at her vinyl maid’s shoes, others snap her cigarette in two, usually in mid-puff.

The building has a fire warden on every floor, entrusted with the task of saving lives. On each of their doors, there’s a hulking brass knocker in case we have to wake them during the night. You can guess what the kids do for kicks, right? The smaller tots can’t reach the knocker alone, so they build teetering human pyramids and clamber over each other to knock their floor-warden into a pissy mood.

Nowa Huta, a bottle’s throw from Kraków, was designed as a planned community, but the plan makes no sense. We once had the biggest steel mill in the country, though Nowa Huta is hundreds of kilometres away from the nearest iron ore deposit. To build this town—a model for future sustainable living—workers bricked over the most fertile, nutrient-soaked land in the nation.

Sustaining ourselves here has sometimes meant tearing concrete slabs out of the earth to plant vegetable gardens.

This proves a point of mine: you have to destroy in order to create. I will not gum up progress. I would be the last one, I swear to you, to knock the fire warden awake. I believe that all fires have a purpose, and I’ll tell you more about that later.

’s office to pay my rent yesterday, and on the way, I ran into Pan Laskiewicz, the husband of secret smoker Pani Laskiewicz. As always, he went to shake my hand (but never in a doorway, of course, because that would be inviting bad luck), and he saw my nails. Pan Laskiewicz is like a saltwater sky: sunny one minute, and a spitting, Baltic hurricane the next. He snarls at the Poczta Polska when they fold his letters to fit them into the letterbox. He pretends to have good manners, but he’s more like a wild boar in a human skin. A real son-of-an-asshole.

A funny look came over his face when he saw my black nails.

“That’s my wife’s,” he said. “She’s the only one who wears black on the end of her fingers.” Even though it’s his first language, Pan Laskiewicz’s Polish wasn’t very good. You could almost see, as one facial twitch ignited another, that he was piecing together a conspiracy in his head. “She adores young men like you, young bucks.”

“What are you insinuating?”

“It doesn’t take a pig brain to realize what you two are doing together,” he said, reaching to fix the suspenders on my glue-spattered overalls. I couldn’t tell if he was casing the best way to bowl me down the main hallway or if he had developed a new respect for me. His generation, it was rumoured, had a love-hate relationship with the young.

“Sorry to tell you,” I replied, “but I don’t find your wife attractive.”

I felt lightning behind my eyelids, my face racing towards the sun. My mind caught up with reality, and I saw Pan Laskiewicz unclench his fist. He had boxed me squarely in the jaw. A corner of my lip exploded. I jumped him and we fell to the floor, the young and the old grappling for power, just like it had always been in Poland. I saw the opportunity to bite his ear off, but I whispered into it instead, caressing it with my lips.

That was true, at least according to the broad-brush definition on Polish Wikipedia.

His grip on my balls relaxed and his hand fell away, almost thoughtfully. I started to breathe normally again.

“A cocksucker,” I reiterated. “An expert in shopping for nail polish. And clearly, I am more physical with you than with your wife.”

He rolled away and smiled at me. A slice of a smile. There were grumes of my blood on his fingertips.

“No. I still believe you two have been fucking, but that’s okay.” He flicked my ear affectionately, a macho zing. “I wouldn’t be friends with a homosexual, so you’re obviously making it up. Tell me, though, does she ...
arrive at full expression
with you?”

The janitor suddenly appeared and nonchalantly started to sweep the trash around us, brushing an ice cream sandwich wrapper noisily past our heads. Ants were making love to it.