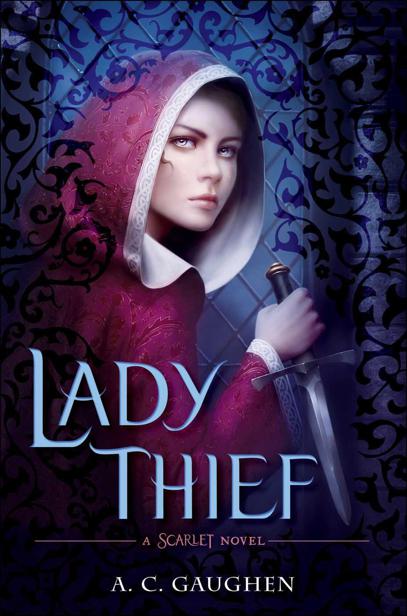 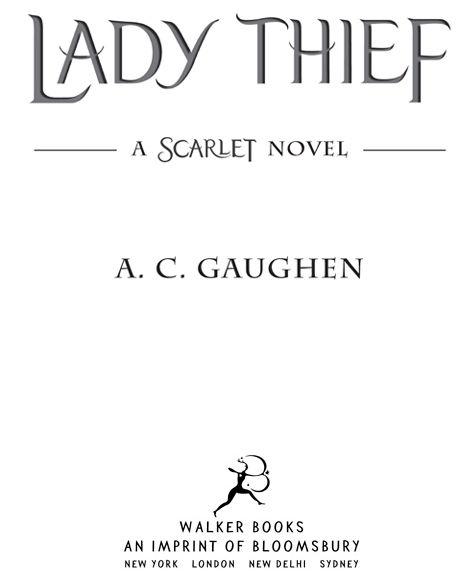 For my dad
Thank you for giving me the opportunities, love, and support to make an unlikely career out of something I love. I never could have done this without you.
I love you
.

Also by A. C. Gaughen

The fire breathed, the dying embers flaring and cooling in a hot pulse. I watched the cold black creep over the orange. The fire were going out.

The cold never worried me overmuch. We slept in the warming room of the monastery, and with plenty of blankets and a well-tended fire, a body never got too cold. I could see Much’s head curled over his knees, his body in a ball nearest to the fire. His arm that were missing a hand were tucked in tight, like he were trying to protect the thing that had been taken from him so long ago. John sprawled out farthest away from the fire, laid flat on his back like he’d fallen down drunk. None of the fights, the battles, the trials ever seemed to pierce through him and leave holes behind like they did the rest of us.

A bare foot away, Rob lay nearest me. Always near, always far. He slept on his stomach now, and he never used to. It weren’t many months since the now-dead sheriff had tortured
him, laying him on a board fitted with spikes until they pressed through his flesh and tore. The holes on his back had been slow to heal, and the pains and infections they caused went so much deeper than his skin.

The embers went black, and then edges of gray started to emerge, and the light shrank full out of the room.

The noises came first—soft swishes. Thumps. Low gasps. I shut my eyes against it.

At the first yell, I sat up, moving close. My heart were too big in my chest, tight and hot and painful, and I felt water push behind my eyes. “Rob,” I whispered, scared to touch him.

Pressing my lips hard together, sucking back my fear, I touched his head, stroking his hair, wishing each touch of my fingers could weave peace into him, like a spell.

His big shoulders eased, and he took a breath, still slumbering.

My chest didn’t feel as tight but the tears weren’t far gone, and I lay down beside him, still threading my fingers in his sand-gold hair. I pushed my head against his.

Breath and sleep came easier both, and my eyes started to slip down. I let them, unafraid. Tonight wouldn’t be one of the bad nights.

I weren’t sure if it were half a breath or most of an hour later, but I woke as Rob shoved me off him, hard. I rolled on the stone, and a moment later he were on top of me, his hands wrapped around my throat.

I couldn’t see him in the dark. I couldn’t see his ocean eyes, and it were too close to my every nightmare of Gisbourne. I clawed at his hands and tried to yell but it came out a cough.

“Robin!” John roared, and I could bare see his steel-roped arm come round Rob’s neck, hauling him off. Rob’s hands pulled me up till he let go, and I fell to the ground. The room filled with light as Much flared a candle, his face fair white even in the yellow glow.

Tears ran slick on my face, and I pushed them off fair quick before Rob could catch it.

Rob slumped against the wall, his chest heaving with breath, his hands pressed against his face. John stood above him, keeping him from me.

I scrabbled over on my knees, going round John and kneeling between Rob’s spread legs. “
Scarlet
,” John grunted at me.

I paid him no mind as I pushed Rob’s hands off his face. He were flushed, his eyes wild. “You …,” he whispered, clutching my sides, squeezing me so tight it pinched. His head fell on my chest, and he were breathing into the space between us like it were the only bit with air.

“Much,” I said, turning a little. Him and John were just standing, frozen, watching. Not one of us knew what to do for Rob. “Give me the candle. You lot can go back to sleep.”

Much did, even as John stood still.

Rob lifted his head, still touching me. “I’m all right,” he said to John, his voice rough. “I won’t … I’m not a danger to her.” His fingers dug into my skin, and it felt like he were trying to crush me, make me shatter under his hands like an eggshell. A breath later, his fingers went gentle.

John nodded slow and wary, looking at me and turning back to his bedroll. It weren’t a full moment after that Rob’s hands uncurled from my skin and fell from me.

I stayed still, something stuck in my pipes that I couldn’t swallow down. He weren’t breathing as hard, and I reckoned that must have been a fair good sign.

His hands caught my hips again, but he didn’t pull me near like I thought he might. He pushed, gentle, moving me away from him.

He stood, and without a word, he went to the door. He swung it open and the rush of cold air were like a slap.

John looked at me, but I just shoved into my boots and grabbed up an armful of Rob’s things before going outside.

Rob were striding down the cloisters, and I ran to catch up with him.

I threw his boots down at his bare feet. “Don’t run away from me,” I snapped.

I sat on the snow-dusted stone, stretching my legs out and leaning against one of the stone pillars of the archway. “You didn’t,” I said, handing him a cloak. He stared at it. “Put it on. Anger may feel warm but it ain’t going to keep you from falling sick again.”

Rob’s jaw rolled with muscle. “I didn’t
fall
sick,” he snarled, swinging the cloak round his shoulders and sitting on the ground across from me. “I was laid on a board with spikes on it, and I felt it as each one pushed through my skin. And those gaping holes didn’t quite heal right, did they?”

My knuckles were rubbing over my cheek before I knew what I were about. He weren’t the only one that Gisbourne and the sheriff had left marks on. The new scar I’d gotten for marrying Gisbourne to save Rob’s life were harder than the last, like something were stuck deep inside it. It were longer too. “They never do.”

He let a moment pass. “I don’t want you out here.”

I just huffed at that.

“I like the cold,” I said, tucking my cloak tighter around me anyway. He opened his mouth to try and shake me off again, so I asked the one thing I knew would hush him. “What do you dream of, Rob?”

He glared at me, but his eyes fluttered shut and he shook his head.

I rested my leg against his. He breathed a deep sigh, but his leg eased into mine.

We didn’t talk more. We stayed quiet and wakeful in the cloisters till we were half-froze, until the sun came up and the monks walked their silent ways and I wondered if God were making Rob pay for his sins or just my own.

John kicked my boot, and I jerked. It weren’t like I’d been sleeping, just tucked inside a half-frozen stillness that had settled down on my skin. Rob kicked him back for it, and John stepped free. “You really want to take me on, Rob?” he asked. John were smiling, but he were standing between me and Rob again.

“Not at the moment,” Rob allowed, standing and pulling me up, going round John to do it. He held me a moment, his hands on my arms, his face glowing heat onto mine.

John looked over his shoulder at us.

Rob let me go and I glared at Much. It weren’t like me and Rob had more than our share of soft moments.

“What?” Much asked me, but I shook my head. The boy had less sense than a wooden post sometimes.

Rob led the way, and I followed behind him, with Much behind me and John at the flank. The winter forest were different for us; the snow covered the ground and made everything in the forest a lie, a trick. Holes were covered over, once-strong branches were brittle and weak. Everything looked beautiful and clear, like the world were at peace, but what it really meant was not a thing could live upon its frightful cold.

Not even me, and I were a creature meant for no warmth, no sun, no light. The winter forest wouldn’t hide me in its branches, weren’t strong enough for me to run along the trees, and it made me stand out against its snow.

My forest had turned on me.

The closer we got to Edwinstowe, the more the thing turned into a dance. In the winter forest, you could see farther than were fair good for a thief or her friends, so each step forward were a step to the side, stepping close to a tree to blend dark clothes to dark wood.

On the edge of Edwinstowe, the others stayed against the trees while I moved forward. I were still the best at this part, moving silent and unseen through a place. I taught the others what I could, but there weren’t no teaching the shadows to welcome you in.

I stole through the rough rows of houses to the well in the center of town. I waited on the side of the nearest house, listening.

Their heavy footfalls were loud enough to announce them from far off. The knights strode through the town, the lane
empty but for them. The villagers had learned to stay well below their notice; the knights were wont to take whatever they pleased.

I heard a door open in the quiet, and the footfalls stopped. “Sirs,” said a breathlike voice, so oversoft I couldn’t tell who spoke.

“Why, I was just headed to the well for some water,” the voice purred out.

Quick moments passed before the two knights appeared, one holding a pail and the other holding the arm of Agatha Morgan, Mistress Morgan’s redheaded eldest child. The first knight hooked the pail onto the rope and set to lowering it while Aggie leaned back against the well, batting her pretty lashes up at the second knight.

“How do the menfolk fare?” she asked sweet. “My father is one of the men rebuilding the wall.”

“Is he?” the knight asked. “I’ll ask for him and bring you news. The reconstruction goes well, and since we’ve come to town the vagabonds responsible for the destruction of the castle haven’t shown their faces.”

The Vagrants by Yiyun Li
The Good Lawyer: A Novel by Thomas Benigno
A Breath of Scandal by Connie Mason
Exile's Children by Angus Wells
Founding America: Documents from the Revolution to the Bill of Rights by Jack N. Rakove (editor)
Feels Like the First Time by Shawn Inmon
Constantine by John Shirley, Kevin Brodbin
Once and for All by Jeannie Watt
Sister Mine by Tawni O'Dell
Gabriel's Redemption by Steve Umstead