Lance of Earth and Sky (The Chaos Knight Book Two) 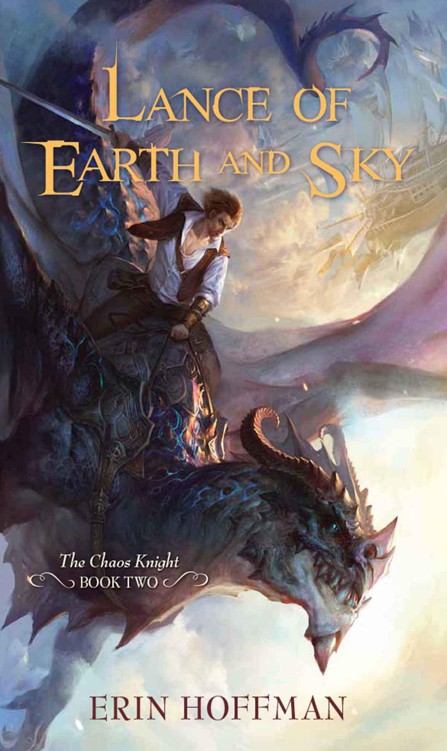 Published 2012 by Pyr®, an imprint of Prometheus Books

Lance of Earth and Sky
. Copyright © 2012 by Erin Hoffman. All rights reserved. No part of this publication may be reproduced, stored in a retrieval system, or transmitted in any form or by any means, digital, electronic, mechanical, photocopying, recording, or otherwise, or conveyed via the Internet or a website without prior written permission of the publisher, except in the case of brief quotations embodied in critical articles and reviews.

Inquiries should be addressed to

Part One: Wolves Within

A Silence of Branch and Leaf

T
he blast of gale-force wind knocked Vidarian into the brush. He crumpled instinctively, protecting his torso with his arms and knees, leaving his back exposed to the reaching dry branches and rocks that littered the forest floor. With a snarl he leapt back to his feet, using momentum and fury to unleash an arc of fire energy. It sizzled through the brush, leaving smoke and char where it passed. A high-pitched yelp at the end of the sear told him he'd found his target.

Close thunder rattled the sky, and with it the first hissing drops of a cold rain fell through the trees. Tiny candleflames that dotted the brush with fire from his attack crackled their complaints before expiring into steam. Thunder called again, and with it Vidarian heard distant laughter.
Her
laughter.

It would have been easier if the laugh had been wicked or cruel. Instead it was joyous, the laugh of a little girl riding a horse for the first time, of lovers reunited. The Starhunter's storm was vast, his water sense told him, wrapping Andovar from pole to pole in a dangerous embrace. Her laugh reminded him, as the Starhunter always would, painfully of Ariadel, a searing memory that stopped him in his tracks. She hadn't spoken to him since the gate had opened.

The seridi came hurtling through the charred branches with a shriek, heedless of rain or fire. Her eyes, too large in a feathered but human face, were all pupil and full of hell and madness. Fingers that were elegant on a sane creature were warped into claws, and her wings were a tattered ruin. Worse still were the chaotic thoughts she radiated to anyone within a hundred feet—mad ravings and images of impossible machines, liquids that burned, a terrible light that flashed and devoured whole cities.

It was always more difficult when they talked. The words were mad, poisonously so—but Vidarian always had the disturbing feeling that to the seridi they made perfect sense. Like the others, this one reached out desperately with magic, grasping with elemental hands when words failed her. The rush of wind pulled fire from Vidarian's chest; his own ability wanted to dive into hers and combust, consume the air that gave fire life. It hungered.

But Vidarian had something besides hungry fire. Even as his own soul reached back toward the air, driven to grow, the water in him growled back at it, primally angry, mindlessly intent: water suppresses fire. Vidarian turned the water's smothering force onto the seridi, flinging out an arm. The rain spiraled at his command, making a cyclone of the seridi's energy, then wreathing itself around her throat.

He
pushed
, setting free more of the water's fury, and the seridi crashed against the oak behind her with a keen like a terrified rabbit, always just shy of human. Vidarian tightened his grip, and her keen stuttered into a choke.

For these creatures he had thrown away everything—his ship, his oldest friend, the only woman he had truly ever loved—and all they were good for was containment. For the past two months he had hunted these mad ones, risking life and limb and sanity to catch them before they could rage through the land spreading senseless destruction. But he had never killed one.

Who was this creature, to demand so much of the world? Of him? Vidarian looked into the seridi's eyes and tightened his grip again.

Branches cracked behind him as something large hurtled through the brush. Altair's presence struck Vidarian seconds before the gryphon appeared, crashing through the space around his mind that he only now realized gryphons always respected as personal. He was so startled that his grip on the seridi loosened, and she sprung free, lashing out with claw and magic—

But Altair was there, reaching out with his own formidable wind mastery and turning the creature's raw assault back against her. With one smooth movement she was suddenly contained, and as the sphere of air that spun around her took sound with it, silence fell in the woods, leaving only the patter of steady rain.

Vidarian almost jumped as Altair's massive foreclaw settled gently on his shoulder. Talons longer than Vidarian's fingers and three times as thick brushed his chest and shoulder blade, and he knew from the gryphon's wash of emotion that they were meant to reassure.

//
It isn't her fault, my friend.
// The white-feathered face was gentle, pensive. //
Two thousand years locked in an abyss with the Starhunter and it's a wonder she functions at all.
//

“And what about me?” Vidarian said quietly, releasing his elemental hold on the seridi with as close to kindness as he could summon. “A turn with her in my head and the loss of everything I loved—” a memory: Ariadel, near death, summoning the strength to turn her head away from him. Words died on his tongue, and he fought to summon them again. “How am I to be affected?”

Another rustle from behind them spared Altair from having to answer. Isri climbed over branches and fallen debris, materializing through the rain, her dark spotted feathers the perfect camouflage in the shadowed forest. Guilt flushed through Vidarian as soon as he saw her; her sanity, and the pain that radiated from her whenever they found another of her brethren, whether lost or sane. When her people had come through the gate, half had been insane, lost beyond even her powerful abilities to heal. And yet she had never wavered in their task. He hoped desperately that she had not been near enough, even with her formidable telepathic ability, to witness the weakness in his heart.

But Isri had eyes only for the captured creature. Altair thinned the sphere of his control, allowing her to approach. “She is Alar seridi,” Isri said, “storm clan. Their people were among the first to succumb.” She closed her eyes, and the wave of peace that spilled out from her, intended for the captured seridi, touched Vidarian as well, chasing away the last of his fury.

It left the guilt untouched. “Am I becoming a monster, Altair?” Vidarian asked quietly.

The gryphon's head tilted toward him, beak parted, but he did not answer.

Frustration welled in him again, threatening to ignite into anger, and Vidarian turned and strode into the forest.

He thrashed his way through low-hanging branches for twenty paces toward their rough camp before realizing there were few places he would rather not be in that moment, alone with the two other mindless seridi awaiting escort back to the gate site.

The
Destiny
was anchored at a clearing beyond the camp, but Altair would expect him to head there, and so he turned in the opposite direction. It happened to be uphill, and so for the next several minutes he vented his anger by striding upward, kicking rocks behind him as he went.

He made it to the top of the hill exhausted, soul-weary, and, finally, silent of mind. And so the spectacular sunset that spread itself before him struck him dumb, a sky stained red with clouds that had just deigned to part, molten light pouring into the valleys that descended all the way to the sea in the west. Something stirred within his fire sense—it reached out to the sun, recognizing something. It was as if, and so Isri had told him the seridi believed, there were not only five elements, but many arrayed beneath them, storm and sun and river and flame. This, too, was a punishment; the fire within him had come from Ariadel, and the cruelty it turned on him was a constant reminder of her absence.

This strange, hilly country was as beautiful as any he'd ever seen, incongruous with his dark thoughts. It ran through him like a river, but where it should have washed peace, instead it laid bare the desert inside him. Now it seemed as though the chaos behind the gate had hollowed him out, eaten his very will to live. The bounty of the world unfurled before him, but he felt only emptiness.

Heat brushed his thigh, and he looked down—a rounded oval glowed red through the pocket of his trousers. The stone was even warmer to the touch, and it flared as he removed it into the fast-fading light of the sun.

As he slid the sun ruby through his fingers, the pang of another memory echoed through the well of his tired mind: Ruby, smiling, trusting him with their destiny. The gate, opening onto madness, twisting the world. The slightest suggestion would bring all of it echoing back again—the empty space between worlds; Ruby's body, stained with her namesake, dying, one of the greatest captains he had ever known. And one of the truest friends.

No sentiment
, she'd said. His hand clenched tight around the hot stone.

Then a voice. A familiar voice.

Loose Screw (Dusty Deals Mystery) by Davies, Rae, Devoti, Lori
A Wizard's Wings by T. A. Barron
Tarantula by Mark Dawson
The Midnight Hour by Brenda Jackson
Landmarks by Robert Macfarlane
My Name is Resolute by Nancy E. Turner
On the Offensive by Cara Dee
Ties (Running With Alphas Book 6) by Viola Rivard
The Stag Lord by Darby Kaye
Fiancee for One Night by Trish Morey