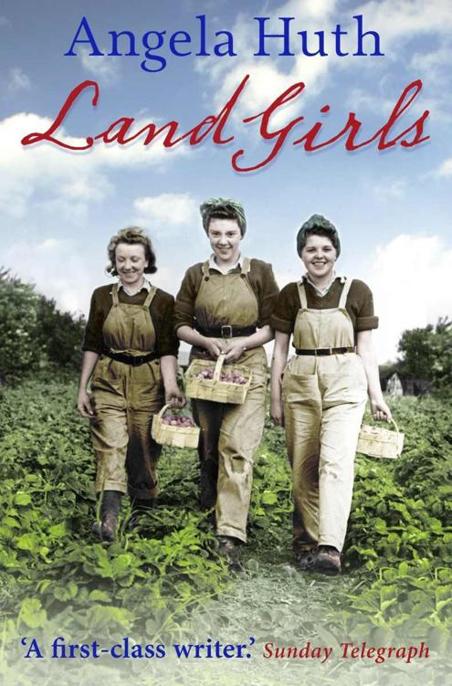 ‘It had me in its grip and I couldn’t rest until the final page … It is satisfying and rare to read a book whose characters are dealt the fates we feel they deserve … A beautifully spun tale.’

‘Huth’s controlled, eloquent style has been compared to Jane Austen’s, but her talent is entirely original.’

‘Huth is a master of this sort of novel, steeped in period atmosphere and gentle irony.’

For Candida and Rupert

A
gatha saw Prue creep along the crossbeam of the barn, arms stiffly outstretched, awkward, determined, brave. Her thin white legs were lit by a torch held far below. Her thick regulation socks and heavy brown shoes were cast somewhere into the hay.

Agatha saw Prue pause, flutter, not daring to look down. Her left foot wavered, suddenly unsure where to land. The toes panicked. She was nearly at the end, where a ladder waited. But she could not make it.

Agatha saw Prue fall into the darkness, heard her scream. No one in the house could have heard, because at that moment a siren began to wail. Its mournful voice and the ragged shriek coiled into a terrible sound that, even now, some fifty years later, Agatha still heard.

With an effort she withdrew from the picture of that night, and returned to her place at a prim restaurant table in a London hotel.

Agatha was the first to arrive, as always. Stella could never be on time. Prue was unpredictable.

She pulled off a slither of black kid glove and let her finger run over the whiteness of tablecloth that radiated before her. She hoped the nearby waiter, officiously observant, would not present her with the enormous menu poised in his hand nor make enquiries as to her desire for a drink. She did not want anything, except a few moments to gather herself before the others arrived. It had been a long journey from Tiverton, and her grandson Joshua had driven through the London traffic too fast for her liking. She felt a little ungrounded. Cities always filled her with unease. She was glad she had refused her daughter’s invitation to stay the night, and had decided to return on the five o’clock train. Her husband would be at the station to drive her home. He would have lit the fire and put the pie in the oven as instructed. In old age, she relished the safety of their quiet evenings together. There were few occasions for which she would sacrifice one of them for a night in London. She came up rarely, now, though nothing but real disaster would keep her from the annual meetings with her oldest friends.

When she looked up she saw that the waiter had turned his back. He had probably decided an old lady, peacefully waiting, was not worth approaching. Quite right. Agatha knew the usefulness of her stern look, and she was glad she had employed it. The professor had married her, he always said, because she was so alarming. He had wanted to know whether, over the years, he would grow less alarmed by her. Had he? She didn’t know. It was not a question she could ever ask.

Outside the window, the trees of Hyde Park were more thickly gold than the trees in Devon. Their own beech had only just begun to turn. She remembered that frivolous park trees were always far ahead in their maturing. This she had observed so many times while waiting for the others. It was a wonder the amazement remained. And the trees, of course, were the reason they had chosen this place originally. As ex-land girls, all of them, they wanted to be able to see the sky while they were eating. They had had their first reunion lunch in this very dining-room just after the war, a few months before Prue’s wedding. Terrible food – corned beef and boiled potatoes – but none of them had minded. Some years later they had experienced their first avocado together – a table in the corner, if Agatha remembered rightly. It had been exciting, that first slipping of silver spoons into the creamy green flesh of an unknown fruit. That was the year, Agatha recalled, when the lunch had started more easily than usual – all laughing over their reactions to the avocado. They had felt none of the initial awkwardness that overcame them on re-meeting after a gap of a year or more. They lived so far apart, their lives had taken such different directions – it was difficult, sometimes, to know where to begin.

Agatha’s fingers, calmer now, slid up the thin silver flute of the flower vase. It held a single pallid rose and a wisp of fern. She tried to work out how many times the three of them had contemplated each other’s metamorphosis over similar, scant little flower arrangements. But what did it matter, how many times? It was a tradition that would go on till one of them died. Then, would the remaining two …? When one of them died, would the remaining two consider it loyal or disloyal to continue the lunches?

Agatha looked up. She saw Prue in double image – young and high on the beam but, more sharply, a tiny figure dwarfed by the great door of the dining-room, alert little head pecking round the tables in search of her friend. Agatha waved her glove. Prue smiled, pursed her bow lips. She hurried over with such speed that waiters, poised to offer their assistance, saw any help would be redundant and stepped back with secret smiles. They were used, Agatha supposed, to eccentric old ladies.

When Prue reached the table, Agatha stood up. They bent towards each other, making a triangle over the rose. They kissed. Prue smelt of the exotic, musky scent she had always worn: Stella and Agatha had never been able to approve. She was dressed in green, as usual, to match her eyes. A velvet beret slumped fashionably over one side of her forehead, half hiding the white fringe. In the past the fringe had been very long – a cause of constant complaint – and blonde. From under it she would flutter those down-turned eyes at any man who came into the farmyard, in imitation of the glamorous film stars whose lives she found so fascinating. The eyes were still an extraordinary green. It was hard to imagine that Prue, the youngest of them, must be nearly seventy. Whereas she, Ag …

They sat down, both fiddled with their stiff napkins, veered their eyes from each other lest further scrutiny reveal changes they had no wish to see.

‘I had a postcard from her only last week saying she’d be catching the eight fifteen from York.’

‘Did she mention her health?’

‘Only to say there’d been another attack of bronchitis.’

‘She wrote the same to both of us, then.’

‘She always had such an innate sense of fairness, dear Stella.’

‘That time – that harvest time.’

‘That harvest! I often think of that.’

‘And would the ladies care for an aperitif?’

Agatha put on her fiercest face. She didn’t care for the way waiters addressed people these days.

‘You’ll be having your usual White Lady, Prue?’

‘Why not?’ Prue twinkled.

‘And I’ll have a Kir Royale.’ Then, in a voice so low the waiter was denied the private information, she added: ‘Something Joshua introduced me to last Christmas.’

‘Joshua!’ Prue, who had no grandchildren, clapped her hands. Agatha had always admired her enthusiastic interest in other people’s relations. ‘He must be thirty?’

But she was not thinking about Joshua. She was thinking about her husband: at this moment he would be sitting with his cheese sandwich by the Aga, preoccupied by the future of his Friesians. Alone, without her there to deflect his thoughts, he would be worrying once more about whether they would have to sell up the farm. Agatha dreaded his decision. They did not want to move, after forty years.

‘
So?
’ said Prue, when the waiter had gone off with the order.

The very thought of having to distil her news made her curiously tired. The friends had not met for eighteen months, though they had kept in touch with occasional letters and cards. In that time nothing exciting had happened to Agatha: probably nothing very much exciting had happened to the other two, either. But having made the effort to travel so far to see one another, each felt it incumbent upon her to do her best to entertain. What usually happened was that they found themselves racing through contemporary news with perfunctory speed. However much they intended to convey to the others the nature of their present lives, what really fired them was their past. To reminisce was so much easier – the jokes that never dulled, the intriguing speculation about what might have happened, the realization of what the hard years of the war had taught them. Prue and Stella and Agatha never ceased to marvel at the powerful warmth that still emanated from a shared experience of so many years ago. They would leave their meetings reinvigorated: newly grateful that something that had bound them in the past could remain so benevolently alive, untouched by the vicissitudes of the intervening years.

Agatha and Prue glanced at each other with a feathery shyness that would soon be dissipated by their cocktails. They had a mutual need of their friend to enliven this reunion. Stella, who was always the best one at breaking the ice. Stella, who used to say she could not imagine living without being in love – it would be a wasted day, a day not loving someone, she used to say. Stella, who, as Agatha had recognized the moment she met her, was blessed with the kind of exuberance for daily life that could accommodate other people’s awkwardness. Agatha had learned so much from Stella.

‘She’ll be here any minute, I expect,’ she said, a little desperate, longing for her drink, and longing even more for the train journey home when she could dwell on all that was about to be said.

‘Of course she will. Dear Stella,’ said Prue, also a little desperate, and flashing her green eyes in what Agatha recognized as a familiar, hopeful fashion towards the door.

It was unusually cold for the time of year. There had been a hard frost that morning which had not melted all day. Frozen puddles spat at the wheels of his cumbersome old Wolseley. He could hear the angry hiss and crackle as the ice splintered. The noise reminded him of those small fireworks that he had waved round in his hand, on bonfire night, to please Joe when he was a child. He kept his eyes on the road.

There were two girls in the back, one by his side. Faith had told him their names several times, but he remembered none of them. At the station, he hadn’t liked to ask. He had shaken hands, introduced himself, and picked up their suitcases before they could protest. They looked a nice enough lot, far as he could tell. The district commissioner had guaranteed she would send some good ones.