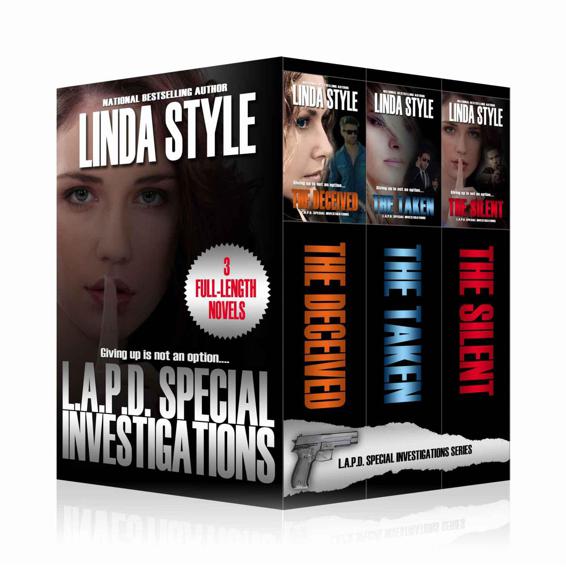 THE DECEIVED – Book One

Giving up is not an option…

Winner of the Orange Rose Award

“Linda Style writes an
intriguing, fast-moving, intelligent story
. I’ll be on the lookout for more.”

“
A riveting read
that will leave readers glued to the pages. Ms. Style has a flair for suspense. A series you won’t want to miss.   —
Romance Designs

“
Tense, suspenseful and full of surprises
. The pages seem to turn by themselves. When a story engages my mind as well as my emotions, I know I’m hooked.”   —
The Romance Reader

To the courageous, dedicated officers of the law who

make this world a safer place.

keep me on this amazing journey!

My heartfelt thanks to Paul Bishop, crime novel writer and thirty-five year veteran detective with the Los Angeles Police Department and the West Los Angeles Sex Crimes and Major Assault Crimes unit, and twice honored as Detective of the Year,

for sharing your invaluable knowledge.

And to the City of Los Angeles Chamber of Commerce

A special thank you to Virginia Vail, for lending her Spanish expertise.

All characters in the following books have no existence outside the imagination of the author and have no relation whatsoever to anyone bearing the same name or names. They are not even distantly inspired by any individual known or unknown to the author, and all incidents are pure invention.

Since these stories are works of fiction, I have taken liberties in some areas.

Any errors are mine.

OTHER BOOKS FROM LINDA

He’s desperate to find a killer…

When Detective Adam Ramsey receives a new lead he’s certain the man behind his partner’s murder is widow Jillian Sullivan’s maybe-not-so-dead husband. Vowing to bring the man to justice, he calls on the attractive widow and shows her a recent photograph of a man who looks exactly like her late husband.

She’s desperate to prove him wrong…

Jillian refuses to believe the only man who ever earned her trust could have deceived her and her daughter so thoroughly. She wants answers…even if she has to track down the imposter to get them.

When Adam meets Jillian on a plane bound for Mirador, a tiny village in the Costa Rican jungle, he must keep her from tipping off his target. They form an uneasy alliance to find the truth, but when passion ignites in the steamy jungle, facing down wild animals, kidnappers, and drug lords gets even more dangerous.

Giving up is not an option…

DETECTIVE ADAM RAMSEY slammed a fist on the metal table next to him. “I want the case, Jeff.”

Captain Jeff Carlyle stood sentinel by the door, thick legs apart, arms crossed over his barrel chest, his eyes on the woman being questioned on the other side of the one-way glass. “You’re too close to it, Ramsey. Besides, the feds are on it. It’s out of our hands.”

"Screw the feds. I was Bryce’s partner, for God’s sake. Seven years we were partners. I’m the one he called for help. You can’t shut me out, dammit.” He banged the table again, making it bounce.

Adam’s chest constricted. Anger raged through him, overriding the pain.

He’d been on vacation with his about-to-be ex-wife when his partner, his best friend, had called him for help. He hadn’t known about Bryce’s call until two days later, when he returned to his apartment—alone—and listened to his phone messages.

For God’s sake, Adam! Pick up. I need you now, man! His former partner’s voice shook with desperation. Fear.

He hadn’t been there. If he had… Guilt swept through him. If he had, his partner wouldn’t be dead.

Chest heaving, Adam leaned forward, both hands on the table, head bowed. “I didn’t even get to see him, Jeff.”

“I know.” The captain crossed to Adam and placed a hand on his shoulder. “None of us did. His parents wanted the closed casket. It was best.” He stared at the woman on the other side of the glass. “The transfer is a good thing.”

Adam’s head snapped up, anger spiking again. He shrugged off Carlyle’s hand and squared his shoulders. “That’s bogus. I didn’t ask for a transfer. Why me? Why now?”

“I’m the best man for this job. I knew Bryce better than anyone. He doesn’t make mistakes. Not this kind.”

The captain turned away, as if looking at Adam was too difficult. They’d come up the ranks together and shared a long friendship. After an extended silence, Carlyle said, “Bryce did make a mistake. A fatal one. He got made—his cover blown. The suits are on it. That’s all I can tell you. Leave it alone, take the transfer and do good things.”

“I want to listen to the tape again.”

“The feds have it. You know that.”

Adam swung around, shoved a hand through his hair. “I keep thinking there’s something that might give me a clue.” He laughed wryly. “The last thing he said  to me was that he knew he could count on me.”

Adam looked at the woman behind the glass, seeing her, but not really seeing her. She was crying, tears streaming down her cheeks because her husband had been killed when his truck ran off the highway.

He knew exactly how she felt.

But he was a law enforcement officer. Cops were strong. They didn’t cry.

The Winds of Crowns and Wolves by K.E. Walter
Tiger in Trouble by Eric Walters
Money from Holme by Michael Innes
The Quality of the Informant by Gerald Petievich
Secret Dream: Delos Series, 1B1 by Lindsay McKenna
The Empty House by Rosamunde Pilcher
Whatever It Takes by Dixie Lee Brown
Commitment Hour by James Alan Gardner
Tempted by Fate (The Fate Trilogy Book Two) by Sherilyn Gray
Stories by Anton Chekhov