Read Last Night at the Viper Room: River Phoenix and the Hollywood He Left Behind Online

Last Night at the Viper Room: River Phoenix and the Hollywood He Left Behind 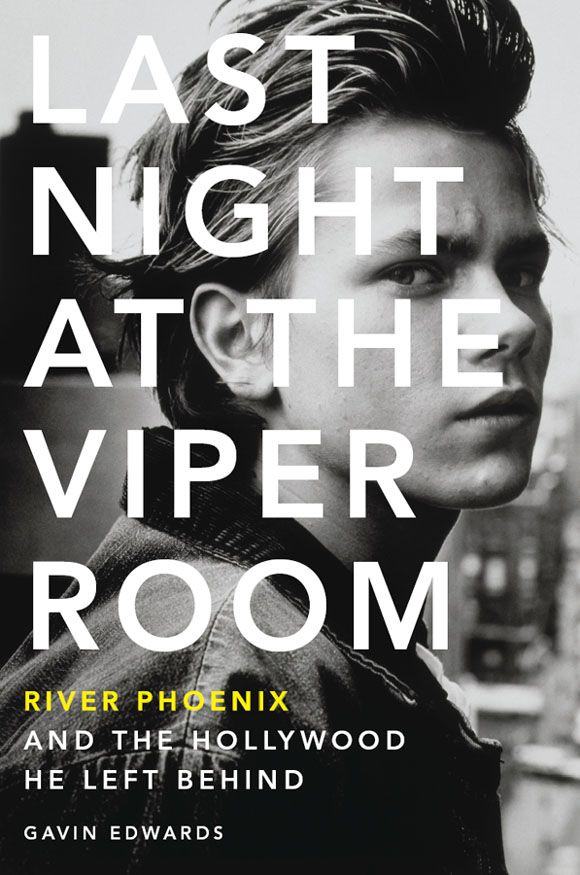 FOR JEN, WHOM I LOVE MORE DEEPLY
WITH EVERY PASSING YEAR

Part One: “When You’re Young, You Just Accept What Grown-Ups Tell You”

4 - One Night at the Viper Room

7 - Another Night at the Viper Room

Part Three: “An Excuse to Get That Far Out of Your Head”

33 - I Hope the Russians Love Their Children Too

37 - Running into the Sun but I’m Running Behind

Part Four: “We’re All Worth Millions of Planets and Stars and Galaxies and Universes”

53 - How Do You Say Good Night to an Answering Machine?

59 - The Bottom of the Bottomless Blue Blue Blue Pool

62 - You’re Where You Should Be All the Time

67 - The Movies of River Phoenix, Ranked by American Box Office

76 - First Night at the Viper Room

84 - Closing Time at the Viper Room

I
t ends outside a nightclub called the Viper Room, on a Hollywood sidewalk. The young man convulsing on the pavement is named River Phoenix. His brother is on a nearby pay phone, pleading with a 911 operator. His sister is lying on top of his body, trying to stop him from injuring himself as his muscles twitch and his limbs flail against the concrete. River Phoenix has overdosed on a speedball of heroin and cocaine, and has only minutes to live.

It begins twenty-three years earlier, on a peppermint farm. A young woman from New York City had quit her secretarial job, become a hippie, and wandered all the way to Oregon. Now, in a small house with an upside-down horseshoe over the front door, she is in labor, trying to push another life into the world. She declines medical professionals, drugs, a drive to the nearest hospital—but she is surrounded by friends. And when, at last, her first child is born, the infant’s arrival on planet Earth is greeted with the sound of applause.

Between applause and agony, between the farm and the Viper Room, between peppermint and heroin, there hangs a life: the twenty-three years of River Phoenix. Documenting River’s time on earth are fourteen feature films, one season of a TV show, and a handful of commercials, including spots for cars and cranberry juice. The movies range from excellent to unwatchable; one of them (
Running on Empty
) yielded an Oscar nomination for River and two others (
Stand by Me, My Own Private Idaho
) are generally considered classics.

As an IMDb page, it’s not a huge ledger: a legacy of steady work over a decade as River grew from an adorable tyke with a bowl haircut into a strikingly handsome young man. But River had impact that far exceeded the number of films he made; he seemed like he had the chance to be the brightest light of his generation. Not long after his death, Brad Pitt mused, “I think he was the best. Is. Was. Is the best of the young guys. I’m not just saying that now—I said that before he died. He had something I don’t understand.”

Ethan Hawke said, “River was one of those people that had that strange magic glow around them; he could drive you crazy, or make you fall in love with him, sometimes in the same minute.”

Even considering that he was an actor, River had a remarkable number of identities in his short life: Child star. Pinup. Proselytizing Christian. Icon to gay men. Street performer. Drug user. Vegan. Singer/songwriter. Rain forest activist. Hollywood scenester. Oscar nominee. These were skins he lived in, or masks he wore for a while. Depending on your point of view, the number of them meant that he had a life full of lies and contradictions, or that he compartmentalized the different aspects of his existence with remarkable success—or that, like many twenty-three-year-olds, he was still discovering who he was, trying on different identities and figuring out how they connected to his fundamental self.

He was the kind of guy, said one friend, “that if you walked outside and it was snowing, you knew the first thing on his mind was making a snowball.”

River loved to embrace friends in massive bear hugs, sometimes surprising them by lunging at them from behind. But if somebody hugged him, he’d quickly squirm away. He wanted any embraces to be on his terms.

Dermot Mulroney, who acted in two movies with River, thought that River’s lazy right eye expressed a fundamental dichotomy in his spirit. He said, “His eyes made him the focus of energy in every scene, the centrifugal force so strong you didn’t even try to duel him for control. The off-center eye read as madness, and the other read pure sanity. In a close-up, from one side he was the guy next door, and from the other he was absolutely insane.”

Cinematographer Bobby Bukowski spent weeks filming River for the movie
Dogfight
. He vividly remembered their initial encounter: “He had very long hair and he struck me—as he came out of an elevator—as an angel, some kind of supernatural being. An angel could be Gabriel, but an angel could be Lucifer too. He would as readily delve into the deep, dark recesses as he would fly up to the lofty, illuminated places.”

On October 30, 1993, actress Patricia Arquette—then best known for
True Romance
—was at home with her younger brother Richmond, who was staying with her. When he asked her who she most wanted to work with, she said River Phoenix. The next morning, Richmond was woken up by Patricia, who tearfully told him the news: while they were sleeping, River had died on the Sunset Strip. The world had changed overnight, and its possibilities had diminished.

THE VIPER ROOM WAS A
small club: a black box with a stage in the corner. It could hold a couple of hundred people comfortably—more if the fire marshal didn’t pay a visit. But it had the highest celebrity quotient this side of a red carpet, because Johnny Depp was an owner. In the Viper Room on the night of October 30, 1993 (and the early morning of the next day), people in attendance included River; his girlfriend, Samantha Mathis; his sister, Rain; his brother, Joaquin; John Frusciante of the Red Hot Chili Peppers; Christina Applegate of
Married . . . with Children;
and Depp himself, who was playing with his band P, which also included Flea of the Chili Peppers, Al Jourgensen of Ministry, Benmont Tench of Tom Petty’s band, and Gibby Haynes of the Butthole Surfers. One of their songs that night was about going to parties in the Hollywood Hills—it name-checked Michael Stipe, Sofia Coppola, and River Phoenix. River had never heard it, and never would.

When Depp walked off the Viper Room stage, a bouncer told him that a friend of Flea’s was having a medical situation on the sidewalk. Depp stepped out of the club’s back door and surveyed the scene: paramedics treating a young man he didn’t recognize, surrounded by a cluster of onlookers in Halloween costumes. Late that night, Depp found out that the young man had been River, and that he had died.

Depp and Phoenix had met, but they weren’t close. On a professional level, Depp admired Phoenix’s work; “there was a specific road he was on that I respected,” he said. He recognized a fellow performer eager to get off the Hollywood highway and hack through the undergrowth.

Depp reflected, “The guy was having a good time but he made a big mistake and now he’s not here. He doesn’t breathe anymore and his mom doesn’t get to see him anymore.” Depp struggled for words. “The thing is, he came with his guitar to the club. You could cut me open and vomit in my chest because that kid . . . what a beautiful thing that he shows up with his girl on one arm and his guitar on the other. He came to play and he didn’t think he was going to die—
nobody
thinks they’re going to
die
. He wanted to have a good time. It’s dangerous. But that’s the thing that breaks my heart, first that he died, but also that he showed up with his guitar, you know? That’s not an unhappy kid.”

Years later, actress Samantha Mathis (“his girl”) said, “It was completely shattering. It was hard to conceive of your mortality at that age. It’s really strange now, to think that I’m not twenty-three, and he’ll always be twenty-three.”

In 1980s Hollywood, Tom Cruise and Michael J. Fox drew the show-business road map: a relentless path to stardom. At the same time, the Brat Pack demonstrated how fleeting that pursuit could be. In the 1990s, River taught a generation of young actors that there could be a different approach, one that placed greater value on artistic integrity and personal politics. Even today, when a young performer advocates for environmentalism or vegetarianism, it’s a ghostly echo of River’s life. His absence got filled by other performers—Brad Pitt, Leonardo DiCaprio, his own brother Joaquin. Looking at them, we can see the ectoplasmic outline of what sort of man River might have become—and looking at him, we can better understand the world he left behind.